7.12 How could the Lunar Module be so stable?

IN A NUTSHELL: Because appearances are misleading. The irregular shape of the LM, with its odd bulges and single central rocket motor, seems strangely top-heavy and as unstable as a football balanced on a finger, ready to tip sideways at the slightest wobble: apparently impossible to fly. But if you look under the skin and explore the LM’s internal structure and bear in mind that it flew in the vacuum of space, it turns out that it was actually easier to stabilize than a conventional pencil-shaped rocket, because its main masses were located at or below the center of thrust of the motor and therefore its center of mass was quite low.


THE DETAILS: Moon hoax theorist Bart Sibrel claims that the Apollo lunar module had a high center of mass that made it too unstable to fly.

Sibrel is not an aerospace specialist, yet he appears to believe that he can judge the stability of a spacecraft just by looking at its pictures. Actually, a less superficial examination based on some elementary physics reveals that the LM was easier to stabilize than a conventional rocket.

In the descent stage and in the ascent stage, the fuel tanks, which are the most important masses of the vehicle, were located as low as possible, laterally with respect to the motor (Figure 7.12-1). 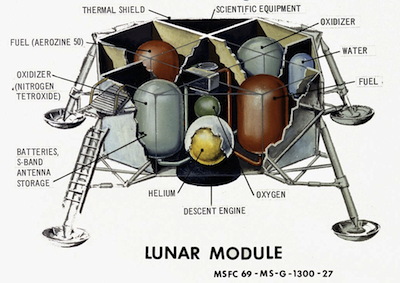 Figure 7.12-1. Arrangement of the fuel tanks in the LM descent stage.


This is a far more stable configuration than a conventional rocket, in which the tanks (and therefore their great masses) are located above the engines. Placing these tanks laterally and at opposite ends actually helped to stabilize the vehicle, somewhat like the pole of a tightrope walker.

Moreover, the main engines were not underneath the spacecraft, as a cursory inspection of the LM might suggest, but were deep inside it, with only the nozzle protruding below. The ascent stage’s engine was actually inside the crew compartment (Figure 7.12-2). This meant that the center of thrust (the imaginary point, located at the top of the nozzle, on which a vehicle “rests” when its engine is on) was close to the center of mass, which was an ideal situation in terms of stability. 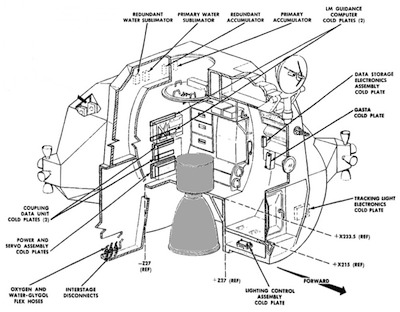 
Finally, the sixteen maneuvering thrusters were placed at the end of outriggers, as far as possible from the thrust axis of the main engine, so as to augment their effectiveness in a lever-like fashion.

The asymmetrical shape of the lunar module was actually dictated by the choice to balance it: in the ascent stage, for example, the dinitrogen tetroxide tank was placed closer to the engine thrust axis than the tank that stored the Aerozine 50 because this fuel component is considerably lighter than dinitrogen tetroxide for an equal volume.

To a layperson, the squat shape of the LM may seem unstable because it’s so different from the slender shape of traditional rockets. But traditional rockets fly in an atmosphere and therefore are subject to complex aerodynamic rules which govern their stability: specifically, they have a center of pressure that must be kept below their center of mass, otherwise they become unstable.* As a result, all other conditions being equal, a slender vehicle is more stable than a squat one in an atmosphere. But the LM flew in a vacuum and therefore was not constrained by any aerodynamic rules (it had no center of pressure to manage) and this simplified its stability.

NEXT: 7.13 How come the astronauts didn’t unbalance the tiny LM?