5.20 Why are the tracks of the Moon car missing?

IN A NUTSHELL: They’re not missing: they’re wiped out by the astronauts’ bootprints, or they didn’t form at all because the special open-mesh wheels didn’t leave deep tracks and because the astronauts often turned the buggy around by lifting it at one end, without leaving wheel tracks.


THE DETAILS: In some photographs there’s no sign of the tracks formed in the lunar dust by the wheels of the electric buggy (the Lunar Rover), neither in front of the vehicle nor behind it. 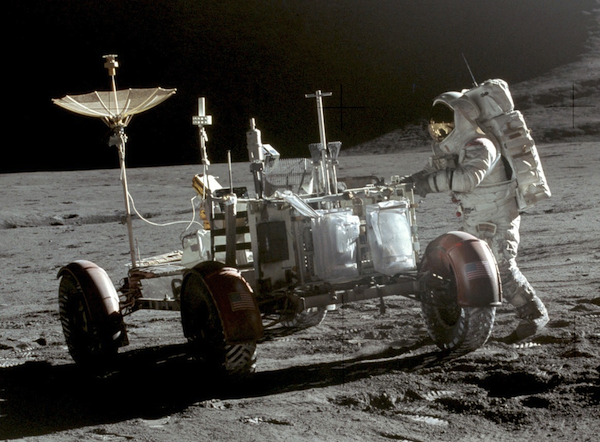 
Yet the same lunar soil clearly registered the astronauts’ bootprints. According to some Moon hoax theorists, the studio crew forgot to add tire marks when they placed the Rover on the set, thus revealing the fakery.

Here’s how the Davidicke.com forum discussed this claim:

And here we see an Apollo 17 astronaut making emergency repairs on the buggy’s fenders with duct tape (How he did that with his gloves on is debatable!).

Ok. So far, so good. Now check out the pic where the repair has been done. There are foot marks near the fender, BUT WHAT HAPPENED TO THE BUGGY’S TIRE MARKS? How did it get there? Was the buggy placed there by a crane? This has nothing to do with gravity or an atmosphere, but shows the hidden side of what NASA did or did not do. 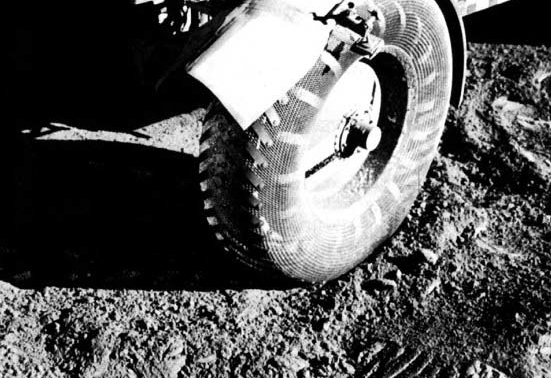 
Actually, there are several reasons why the tracks are sometimes missing. In some photographs the astronauts simply walked over the tracks and wiped them out with their bootprints. To take pictures of the Rover, they had to get off the vehicle and walk away from it, so it makes sense that they sometimes walked over the freshly formed tracks.

Indeed, this is the case in the image presented as alleged evidence: a little research reveals it to be a cropped version of photograph AS17-137-20979, which documents the improvised repair of the Rover’s fender by the Apollo 17 astronauts. To make this repair (using duct tape, clamps and laminated maps), they obviously had to walk all around the damaged fender, thus erasing any wheel tracks.

If we look at the complete photograph (Figure 5.20-3), which is in color and far less contrasted and more detailed than the version presented by the Moon hoax proponents, we find that astronaut bootprints are visible at the bottom and on the right. It is interesting to note that the pro-hoax version is conveniently cropped so as to hide almost all the bootprints. 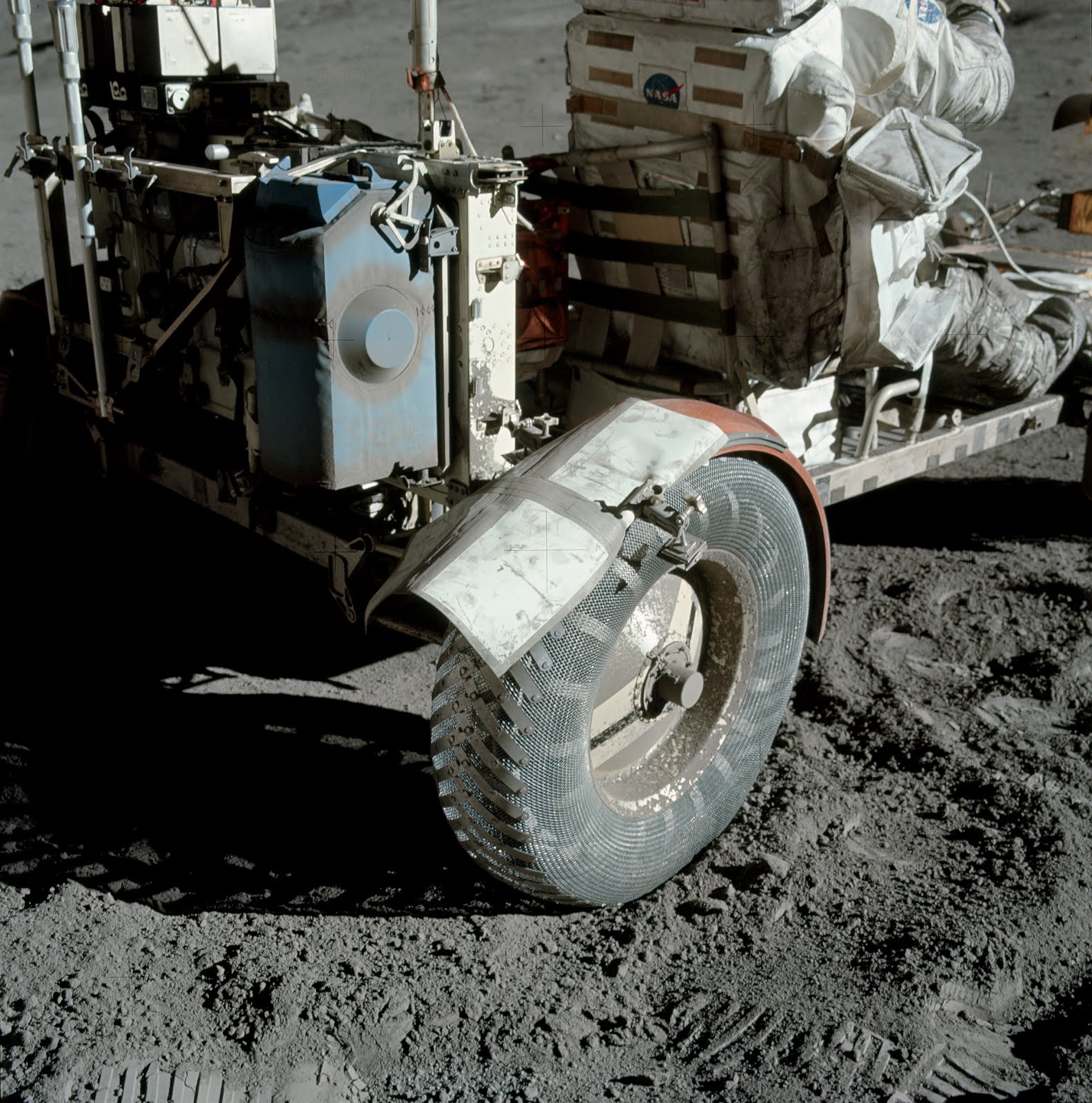 
In other photographs, the vehicle was traveling over an area that didn’t have a deep layer of dust (like the Earth, the Moon isn’t identical everywhere) and therefore the wheels of the Rover left faint tracks that can be seen only in the high-resolution versions of the Apollo photographs but are invisible in the poor copies frequently used by hoax theorists.

It should also be noted that the wheels of the Rover didn’t have tires or a solid tread. They were made of an open metallic mesh on which spaced titanium laminas were applied in a chevron pattern, as shown in Figure 5.20-4. 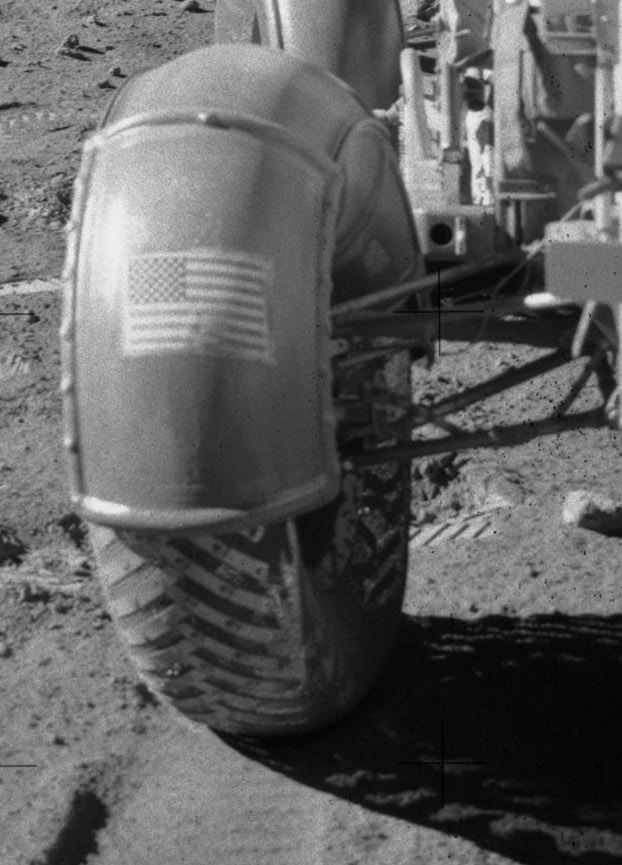 Figure 5.20-4. Detail of photo AS16-108-17620. Note the shallowness of the track and the light that passes through the mesh of the wheel, as revealed by the gaps in the wheel shadow.


The fine lunar dust would pass through the mesh like sand through a sieve and therefore didn’t leave the sharply outlined tracks of a normal solid tire tread, which compacts the ground.

This frequent lack of tracks is due also to another reason, which is rather counterintuitive: the Rover was extremely light, and on the Moon everything weighs one sixth of what it weighs on Earth. The Rover weighed about 210 kilograms (462 pounds) on Earth, so on the Moon it weighed only about 35 kilograms (77 pounds); therefore the astronauts could easily lift one of its ends.

Indeed, that’s what they often did when they needed to turn the Rover around: they simply lifted one end and turned it. This was actually a scheduled maneuver during the extraction of the Rover from the LM: the Moon car had to be turned through 180 degrees to point it away from the LM.

This low weight was distributed over the contact area of the four wheels and therefore the Rover applied a very low pressure to the ground even when it was carrying the astronauts, whose weight was likewise reduced by the low lunar gravity. Accordingly, the wheels did not dig deeply into the soil, producing only shallow tracks.

NEXT: 5.21 How come NASA has published retouched photographs?