IN A NUTSHELL: It’s not a letter, it’s a hair that got into one of the many duplication processes to which the Apollo photographs were subjected for distribution. It’s not on the original film.


THE DETAILS: In a photograph from the Apollo 16 mission record there’s a clearly outlined letter C on a rock and another letter C on the ground next to it. According to French hoax theorist Philippe Lheureux, this is “exactly like with some cinema props.” Ralph Rene concurs: “The large rock in the left foreground is clearly marked with a big capital "C". The bottom right corner has a crease similar to that caused by wetting a folded newspaper. This makes it a showbiz "flap" rock, which the people who work in Hollywood studios throw at visitors. They used to be made from wet newspaper and paste and showed similar flaps. Stage rocks are usually placed by stage hands over similarly lettered markers positioned by the set designer. Did NASA really carry fake boulders and stage hands onto the Moon?”*


The photograph is AS16-107-17446 (the same one that has the allegedly missing crosshairs) and shows astronaut Charlie Duke at the Station 4 site of Stone Mountain. The alleged letter C is on a rock toward the bottom left corner of the picture and can be seen in the detail shown in Figure 5.15-1, which is excerpted from pro-conspiracy site Aulis.com. Another apparent letter C is on the ground close to the rock. 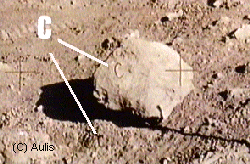 Figure 5.15-1. The alleged letters C on a rock and on the lunar surface. Image source: Aulis.com.


This alleged piece of evidence is so absurd that it begs the question of how anyone can present it seriously as proof of fakery without realizing that it makes no sense. The official publication of a photograph showing two letters C that shouldn’t be there, revealing the top-secret deception that was vital for the destiny and reputation of the United States, would entail a truly unbelievable chain of errors.


The idea that the rocks would be individually labeled with a single letter to assist in their placement also strains credulity. A one-letter labeling system would allow for only twenty-six rocks, which on a set depicting a rock-littered lunar surface might be somewhat inadequate.

Moreover, if the letter C were actually drawn on a sloping face of a rough, irregular rock or on the uneven soil, it wouldn’t have such a smooth shape when viewed from an angle as occurs in this photograph.

Yet despite all this, the fact remains that the letters are unquestionably present in the “official version” published by the NASA website of the Johnson Space Center, show in Figure 5.15-2. 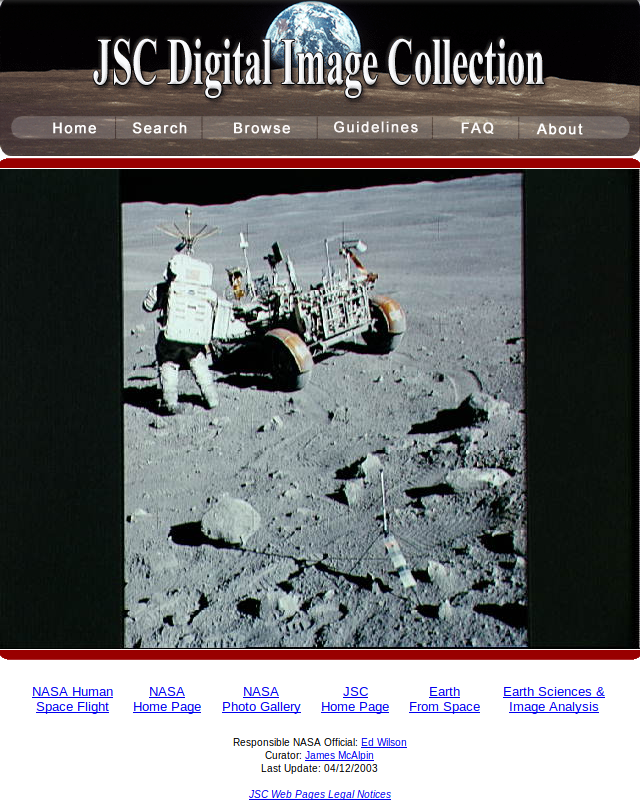 Figure 5.15-2. The photograph with the alleged letters C (bottom left) in the low-resolution Internet archive copy of the Johnson Space Center as it was in 2004 (Archive.org).


The answer to this conundrum, for once, was found by a conspiracy theorist, Steve Troy of Lunaranomalies.com, in 2001 (the original site no longer exists, but Archive.org has preserved a copy made in 2008). His fellow theorists, however, seem to have ignored his research and continue to peddle this alleged evidence.

In 2001 Troy ordered from various NASA agencies film duplicates of this photograph and analyzed them in search of the letter. It wasn’t there. So he contacted the same agencies to inquire why the letter was instead present in one of the “official” NASA websites.

One of these agencies, Houston’s Lunar and Planetary Institute (LPI), found that one of their reference prints, but not their films (duplicates of the Apollo originals), had the alleged letter. LPI supplied Troy with a scan of that print at the highest possible resolution. It turned out that the letter was actually a tiny hair. 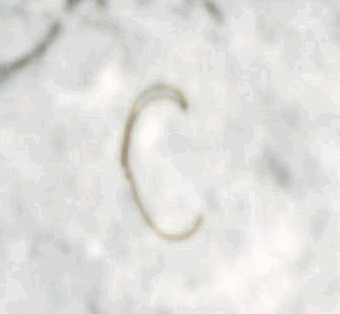 
This high-resolution image clearly shown that the alleged letter is not a pencil or felt pen mark: it’s a curled-up filament-like object. Coincidentally, the alleged letter has one of the shapes that can be most easily assumed by a hair: it’s a C, not a K, F, M or A, for example.

The Johnson Space Center explained to Steve Troy that one of these imperfect prints had been scanned in the late 1980s or early 1990s and had remained on the website since then. More recent, higher-quality scans taken directly from the original film are available online and don’t show the hair. 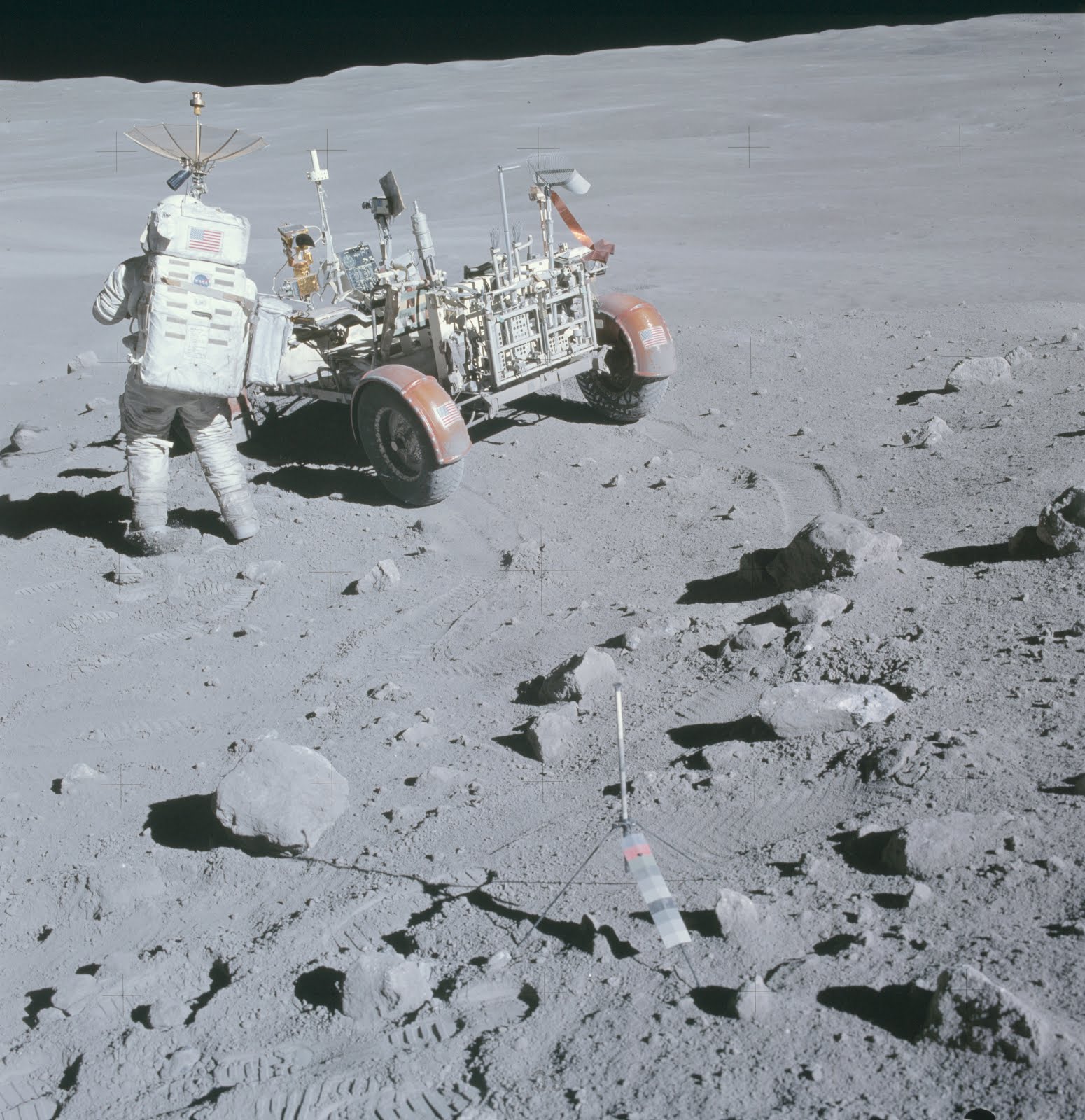 
These scans also reveal that the other alleged letter, the one on the ground, is just a shadow that looks vaguely like a letter C, generated by a tiny bump in the lunar surface, as shown in Figure 5.15-5. 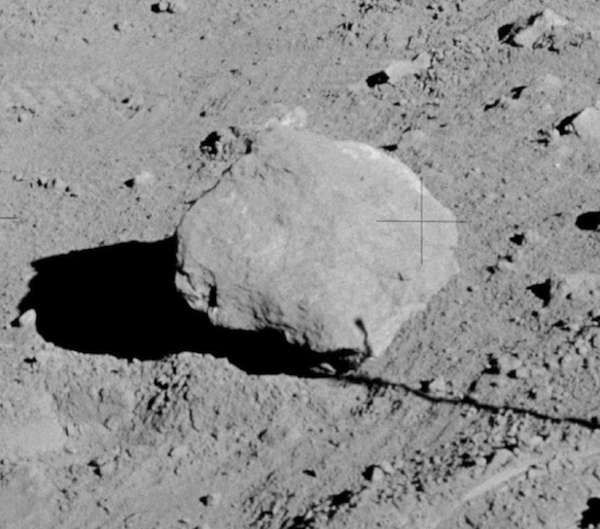 NEXT: 5.16 How come the backpack antenna appears and disappears?