9.6 How is it possible that the Saturn V blueprints have been lost?

IN A NUTSHELL: They haven’t. They’re preserved on microfilm at the Marshall Space Flight Center and on paper at Rocketdyne and in US federal archives. The F-1 engines of the giant rocket are being studied in detail and used as engineering templates for the next generation of spacecraft. Three whole Saturn V rockets are on public display, available to anyone who cares to examine them.


THE DETAILS: John Lewis, in his 1996 book Mining the Sky, reported that he had tried in vain to obtain the blueprints of the Saturn V rocket:

My attempts to find them several years ago met with no success: the plans have evidently been ‘lost’. The fleet has been destroyed. The plans are gone.

Some hoax theorists have built on these reports to claim that the blueprints were destroyed to hide the (entirely hypothetical) fact that the Saturn V actually didn’t work and couldn’t reach the Moon as NASA instead claimed.

However, in 2000 NASA clarified* that the blueprints still exist as microfilm at the Marshall Space Flight Center in Huntsville, Alabama. Moreover, the Federal Archives in East Point, Georgia, store approximately 82 cubic meters (2,900 cubic feet) of Saturn documents and Rocketdyne (the manufacturer of the main engines of all three Saturn V stages) has preserved dozens of volumes of Saturn-related information as part of its knowledge retention program.

Figure 9.6-1. A detail from one of the allegedly lost schematics of the Saturn V. Credit: Up-ship.com.


Moreover, the fleet has not been “destroyed”. There are three full, original Saturn V rockets on display and freely accessible to the public:

There is also a complete first stage of a Saturn V at the Infinity Science Center in Mississippi, and a third stage, converted as a spare for the Skylab space station, is at the National Air and Space Museum in Washington. D.C.

The United States and the United Kingdom are also home to twelve original Apollo Command Modules and there are three spare Lunar Modules at the National Air and Space Museum in Washington, at the Kennedy Space Center, and at the Cradle of Aviation Museum in Long Island, New York (which houses the LM built for the canceled Apollo 18 mission).

Therefore, anyone who wished to study in extreme detail the technologies used to go to the Moon could do so by examining these spacecraft, the spacesuits and all the other Apollo hardware stored in museums. 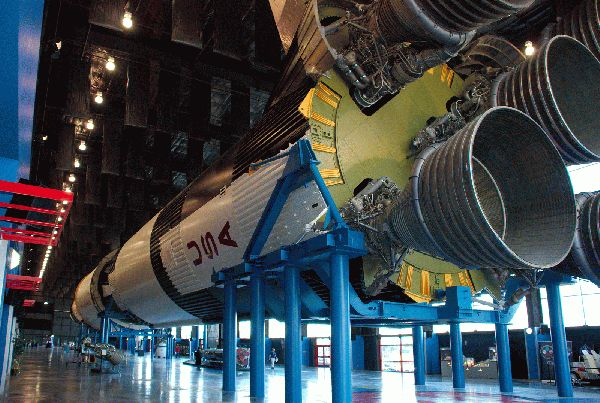 
In 2013, a team of engineers at the Marshall Space Flight Center in Huntsville, Alabama, actually took to pieces one of the original F-1 engines of the first stage of the Saturn V rocket and test-fired its gas generator, the component that powers the engine’s turbopump, which had to inject almost three tons of propellant per second into the thrust chamber. In other words, the fact that these engines really work as advertised is not just a decades-old claim: it has actually been put to the test.

However, it’s very important to avoid the mistake of thinking that if the detailed blueprints of the Saturn V and of the Apollo spacecraft still exist, then it should be trivial to build them again and fly them to go back to the Moon. But the necessary know-how, the unwritten skills of the countless workers who painstakingly built by hand each component of these incredibly complex machines, have been lost to time. The people who knew how to perform these delicate manual procedures have aged or died.

Building a 1960s Saturn V would also entail rebuilding from scratch the entire manufacturing pipeline, i.e., the machines that manufacture the components of the machines that used to build the Saturns. Then it would be necessary to rediscover and recreate the testing and quality control equipment and procedures that were used to flight-quality each and every component. The manufacturing, inspection, and testing methods we use today are radically different from the ones used in the Apollo era.

Accordingly, remaking a Saturn V would be enormously expensive and inefficient. It would probably be cheaper to design a new rocket from scratch.


Figure 9.6-3. This video explains why it would be impractical to build from scratch the giant F-1 engines of the Saturn V rocket.


NEXT: 9.7 Why is there no delay in the Apollo communications?