8.11 How come there’s no blast crater under the LM’s engine?

IN A NUTSHELL: Because there’s not supposed to be one. The idea that the lunar module’s engine should have formed a crater upon landing was suggested by some artist’s illustrations published by NASA ahead of the Moon landings. But the crater is merely an artistic license: the engineers already knew that no crater would form because the Surveyor uncrewed probes had already landed and sent back pictures of their landing sites, which showed no crater under their engines.


THE DETAILS: Conspiracy theorist Bill Kaysing argues that the Lunar Module mysteriously failed to blast a crater in the surface of the Moon with its powerful rocket engine.

NO CRATERS! [...] In all pictures of the LEM on the “moon”, there is absolutely no evidence of a crater underneath the engine. If indeed the module had landed on the moon, the engine would have blasted out a substantial hole in the dustlike surface of the moon.

Kaysing repeats the claim in the FOX TV documentary Did We Land on the Moon? (2001):

“The fact that there is no blast crater under the LM is one of the most conclusive pieces of evidence that I find supporting the hoax.”

But if a blast crater was expected, why would the alleged fakers be so clumsy as to forget to sculpt one into their lunar movie set?

Actually, the expectation of a blast crater under the LM was fostered by many artistic depictions of the Moon landing that were circulated by NASA and by the press ahead of the event, as witnessed for example by Figures 8.11-1 and 8.11-2. 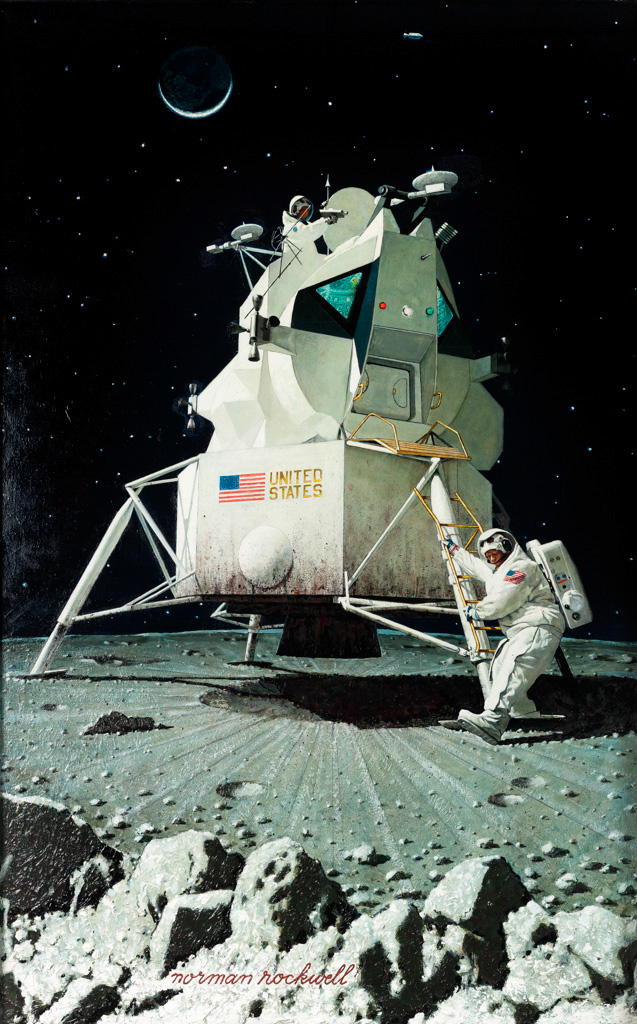 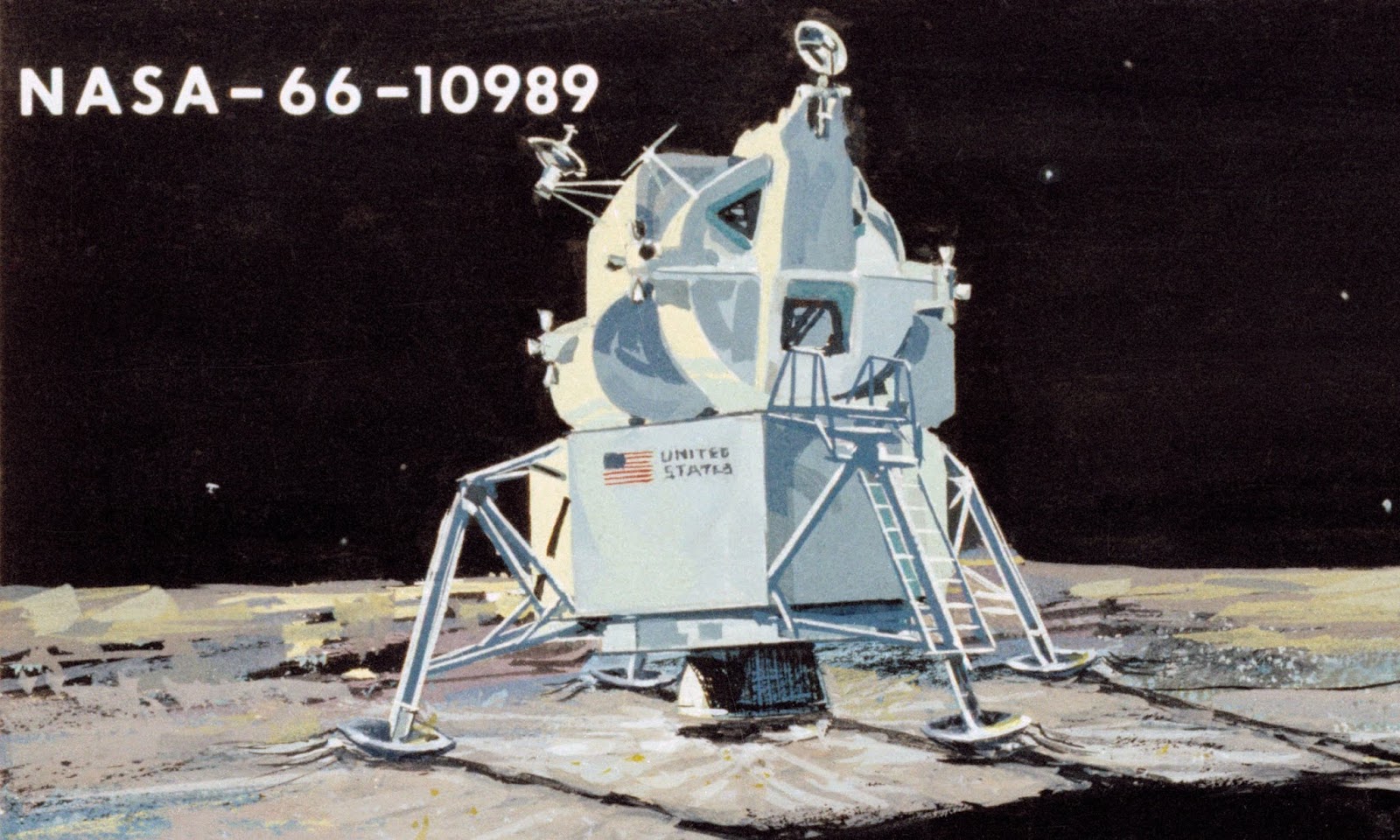 But mission planners didn’t really expect the LM engine to gouge a crater in the Moon: that detail, like many others in artists’ illustrations, was dramatic license.

Artistic depictions are, well, artistic: they’re not intended to portray an event with absolute fidelity, but to bring the event to life, explain it and communicate its significance, drama and excitement. If accuracy gets in the way of the message, it is often set aside.

For example, Figures 8.11-1 and 8.11-2 include stars, despite the fact that stars are normally not visible from the Moon when the lunar surface is in daylight, and the LM is shown without its characteristic protective “tin foil” (thermal blankets and micrometeoroid shielding), which in 1966 hadn’t yet been added to the vehicle’s design.

The crescent Earth in Figure 8.11-1 is likewise impossible, since the planet could only be lit in this way when the Sun is below the lunar horizon and therefore the moonscape should be in darkness; yet in Rockwell’s exciting depiction the shadows suggest that the Sun is above the horizon and to the left.

In other words, the presence of a crater under the LM in illustrations doesn’t prove that the landings were faked: it proves the talent of the artist who found a way to suggest the dynamic action of the engine’s exhaust in a static image. Essentially, Kaysing was mistaking artwork for hard science.

Actually, not all NASA illustrations show a crater under the Lunar Module. Figure 8.11-3 is an artist’s concept created for Grumman (the company that designed and built the LM), in which there’s no blast crater and the LM is depicted far more realistically than in the previous figures (note, for example, the MESA equipment rack and the exhaust deflectors under the attitude control thruster quads). However, the stars are still shown in order to give depth to the artwork and the Earth is too low on the horizon for any Apollo landing site. 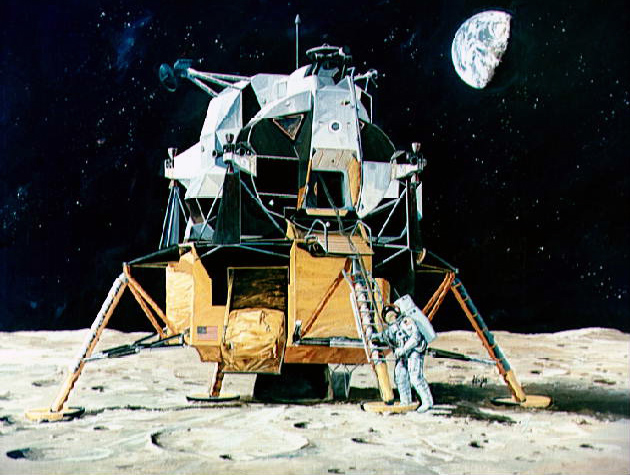 Leaving artistic license and conspiracy theories aside, why didn’t the rocket blast of the LM form a crater or visibly disturb the surface? After all, the Lunar Module was a 15-ton spacecraft, so it needed a powerful engine to counter that weight and make it hover. Instinctively, we expect that kind of force to do some damage to the landing site.

But first of all, lunar gravity is one sixth of the Earth’s, so the LM’s weight on the Moon isn’t 15 tons; it’s 2.5. Moreover, these figures refer to the initial weight of the spacecraft, which decreased dramatically as its rocket fuel was used up. For example, for Apollo 12, which had an initial LM mass of 15,115 kilograms (33,325 lb), telemetry data reported the use of approximately 7,810 kilograms (17,200 lb) of propellant mass,* leaving a landing mass of approximately 7,305 kilograms (16,104 lb). The spacecraft essentially halved its initial mass by burning propellant, and in lunar gravity that residual landing mass is equivalent to a weight of just 1,217 kilograms (2,700 lb). In other words, keeping a LM in a hover above the landing spot entailed countering a weight of just 1,200 kilograms (2,700 lb), not 15,000 (33,000 lb); far less than assumed initially.

Secondly, since the surface of the Moon consists of hard rock covered by a layer of dust, this rather modest rocket thrust would merely blow away the dust and expose the underlying rock. That’s exactly what we see in the Apollo photographs (Figure 8.11-4). 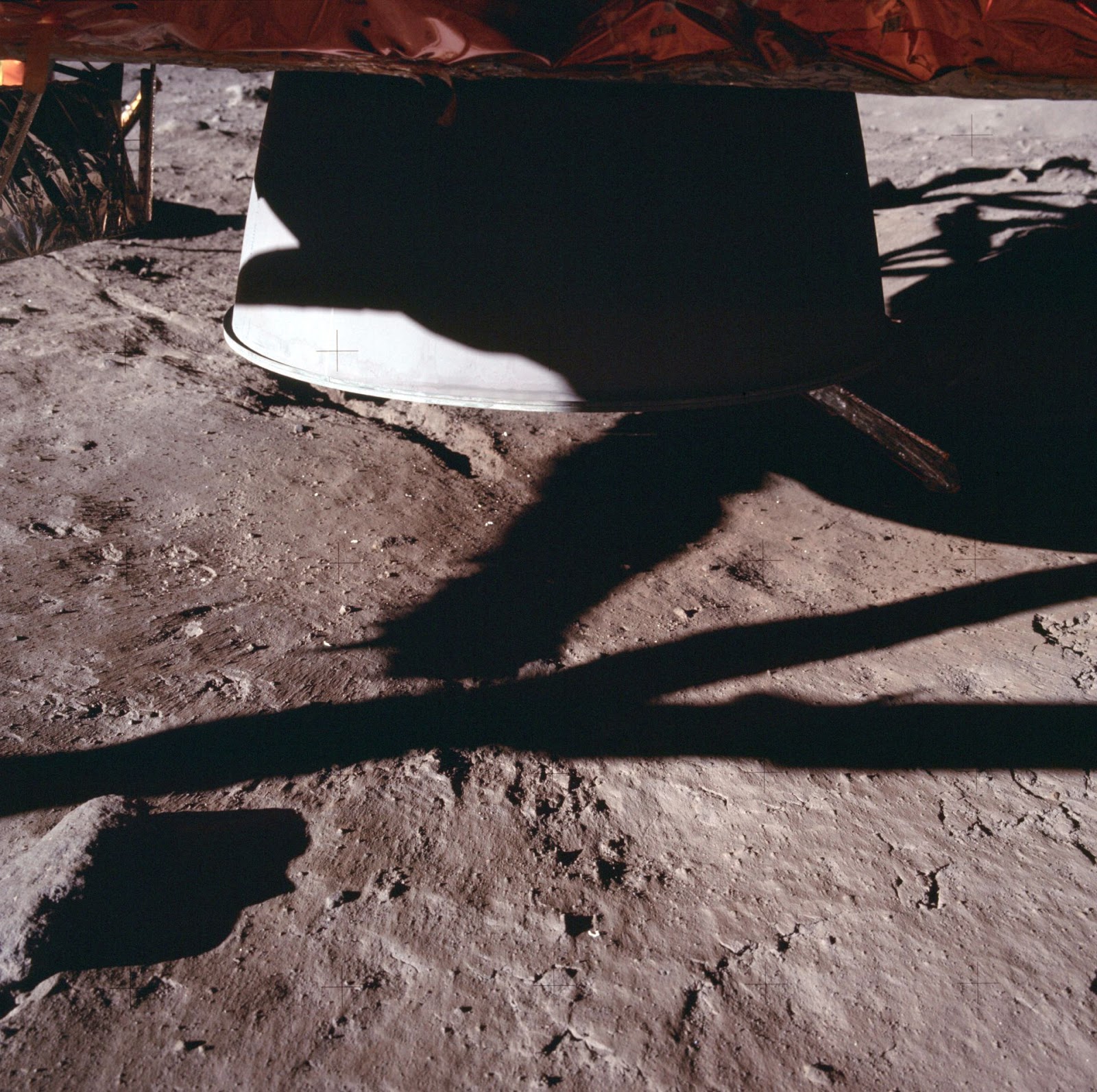 Figure 8.11-4. Apollo 11’s LM descent engine bell on the Moon. Note the dust-free, smooth, rocky surface in the foreground and the radial pattern formed on the surface by the engine exhaust. NASA photo AS11-40-5921.

The LM rocket exhaust might be expected to melt the lunar rocks at the landing spot, but the estimated temperature of the exhaust was approximately 1,500 °C (2,800 °F)* and decreased very rapidly because the hot plume expanded into a vacuum and therefore cooled down, like any other expanding gas.


* The Blast Crater, Clavius.org.
Moreover, it takes several minutes of intense heat to melt the kind of rocks that form the surface of the Moon, whereas the LM’s exhaust struck the same surface spot only for a few seconds. There simply wasn’t enough heat or time to cause significant melting or cratering. What we do see in the Apollo photographs is a slight discoloration, possibly due to charring or to a chemical reaction of the propellant with the rock, and traces of fluid erosion.

No crater was expected by mission planners due to direct previous experience: seven automatic Surveyor probes had landed on the Moon between 1966 and 1968, sending back TV pictures of the landing site and chemical and physical tests of the lunar surface, which showed no cratering and indicated a compact rocky nature that allowed safe touchdown. The Apollo astronauts didn’t fly into the absolute unknown; they had a fairly good idea of what to expect.

NEXT: 8.12 How could the timing of the lunar liftoff footage be so perfect despite the signal delay?