8.9 How could the astronauts have changed film magazines outside on the Moon?

IN A NUTSHELL: Their cameras had light-tight magazines, designed to allow film changes even in direct sunlight and while wearing the spacesuit’s bulky gloves, as shown in the TV transmissions from the Moon. This wasn’t an exceptional technological innovation: the same feature was part of any professional photographer’s equipment in the 1960s.


THE DETAILS: Some Moon hoax theorists argue that astronauts on the Moon couldn’t change the film of their cameras while wearing the clumsy, bulky gloves of their spacesuit and while they were in full sunlight, yet the mission records don’t report that they ever went back into the lunar modules to reload their cameras. So how were they able to take thousands of photographs?

The answer is quite simple but clever: the films used for the Hasselblad cameras taken to the Moon were prepackaged in light-tight magazines that snapped onto the camera body (Figure 8.9-1) and were designed to be changed even in full sunlight. The same method was used by professional photographers of the time to change films even halfway through a roll. 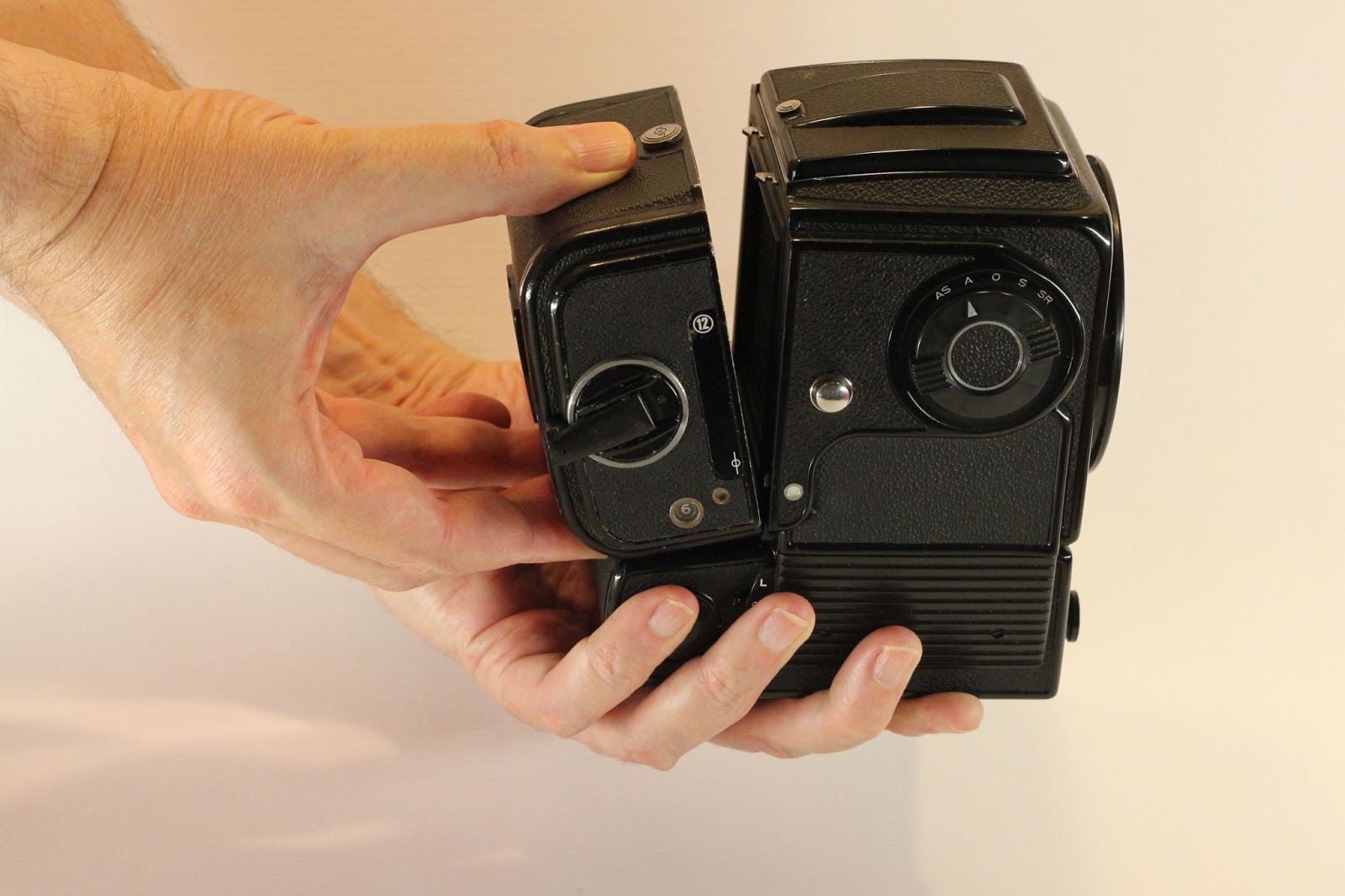 Figure 8.9-1. Snap-on mounting of a film magazine on a Hasselblad EL/M camera, similar to those used on the Moon. Lunar magazines were larger than the one shown. Credit: PA.

Not all missions, moreover, changed films during their excursions outside the spacecraft. For example, the Apollo 11 moonwalk made do with a single magazine, so the problem didn’t occur at all.

Handling the film magazines while wearing the thick gloves of a lunar spacesuit wasn’t a problem because the magazines were cubic objects about 10 centimeters (4 inches) wide on each face (Figures 8.9-2 and 8.9-3). 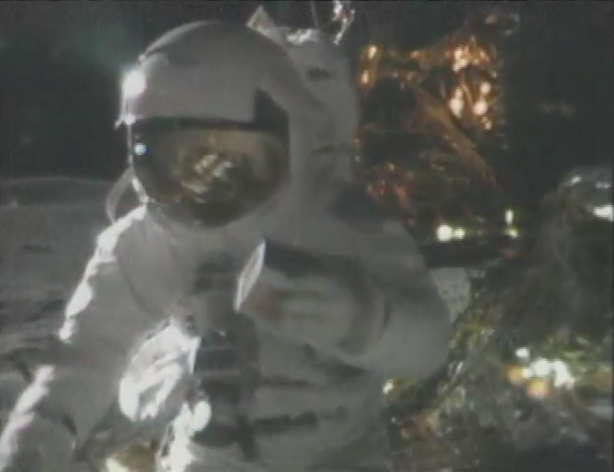 Figure 8.9-2. Charlie Duke is holding a film magazine and is about to change it outside on the Moon. Frame from the Apollo 16 TV transmission.

Figure 8.9-3. Duke changes film magazine outside on the Moon during the Apollo 16 TV broadcast. Note that he reports that he tried to blow the dust off.

Moreover, the magazines used on the Moon had been modified to have larger grip rings, so as to allow easy removal of the so-called darkslide (a removable metal lamina designed to protect the film) even with gloves. This removal can be seen in the video of Figure 8.9-3.

Figures 8.9-4 and 8.9-5 show the darkslide ring of a commercial Hasselblad magazine and of a lunar magazine: the larger size of the ring to allow gripping it with spacesuit gloves is clearly visible. 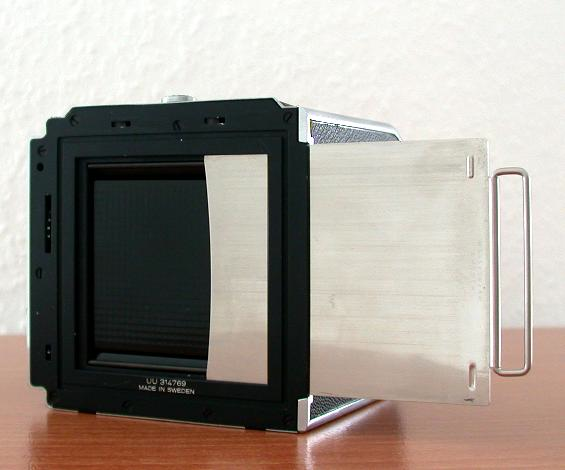 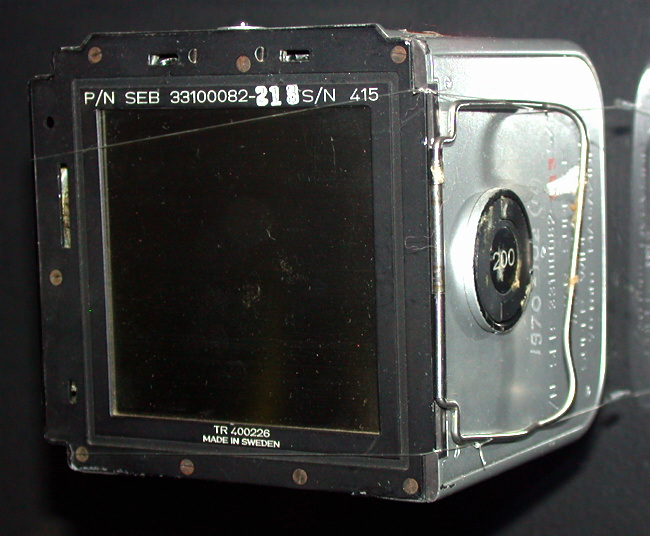 Figure 8.9-5. Magazine R of Apollo 11, currently displayed at the National Air and Space Museum in Washington, D.C. Note the larger ring used to pull out the darkslide while wearing spacesuit gloves. Credit: NASM.

In other words, changing films outside on the Moon was perfectly feasible and had been designed into the Hasselblad lunar cameras.

In the video shown in Figure 8.9-3, astronaut Charlie Duke removes the darkslide before mounting the magazine on the camera. This often perplexes Hasselblad camera experts, since the darkslide is usually removed only after the magazine has been installed, so that the film is not exposed to light. Removing it before mounting exposes the film to light, spoiling it. But Duke isn’t wrong.

In the 1960s, darkslides were normally used in Hasselblads and other cameras that used a film magazine to protect the film from light. This allowed to change film mid-roll, without exposing any frames to unwanted light.

Magazine changes were performed for example to install a Polaroid instant film magazine, take a test photograph with the camera already in position and set up, check the result and then mount a standard high-quality film magazine to take the final photograph.

At the time, cameras didn’t have a video screen that could show the result of the photograph straight away and therefore a Polaroid was the only way to have a preview of the final photo and make sure that the camera was set up correctly.

But Charlie Duke’s actions are correct, because lunar Hasselblads didn’t use the darkslide for protection against light. They used it to prevent Moondust from contaminating the reseau plate, i.e., the glass plate that carried the cross-shaped markings that are visible in most Apollo photographs taken on the Moon.

This different use entailed that the portion of film that was visible during a magazine change would catch the light and become unusable. However, this wasn’t a problem in the particular case of the lunar astronauts, who usually didn’t need to change magazine mid-roll.

The astronauts, moreover, usually took three or four blank shots when they started and ended a magazine, so as to make the film advance and be sure to use a part of the film that had not been exposed to light inadvertently.

NEXT: 8.10 Isn’t it impossible to cool an astronaut in a vacuum?