5.9 Why is there no flag shadow in the salute photograph?

IN A NUTSHELL: Because the shadow of the flag fell out of the frame due of the shallow Sun angle, but it can be seen in other photographs and in the TV and 16 mm footage. The shadow of the flagpole is visible in high-quality scans of the salute photo. 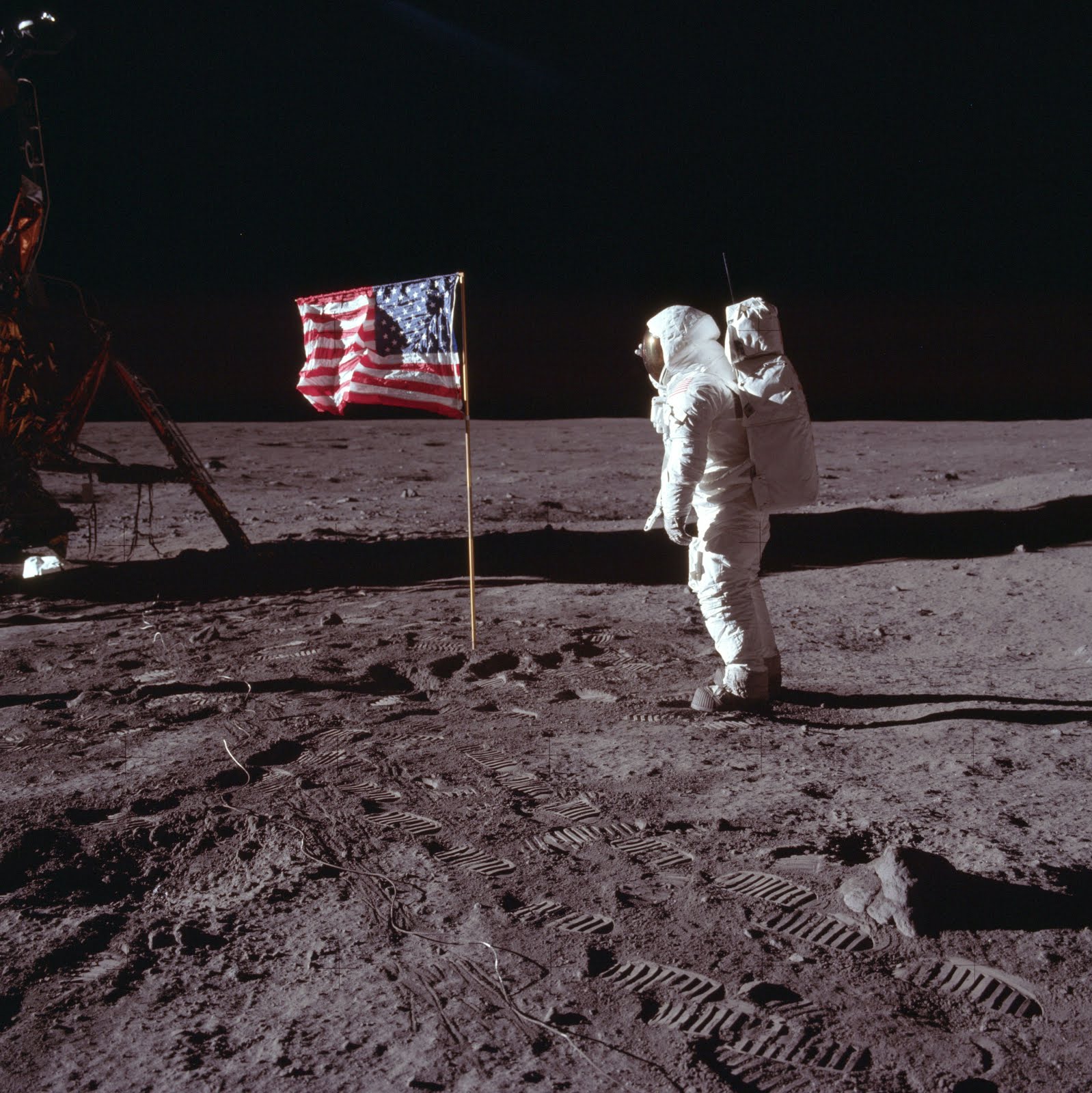 
Sometimes the claim is boosted by showing another photograph, taken seconds later (AS11-40-5875, Figure 5.9-2), in which Aldrin hasn’t raised his arm to salute and therefore appears to be simply standing on the lunar surface, staring into nothingness as if the flag were not there. 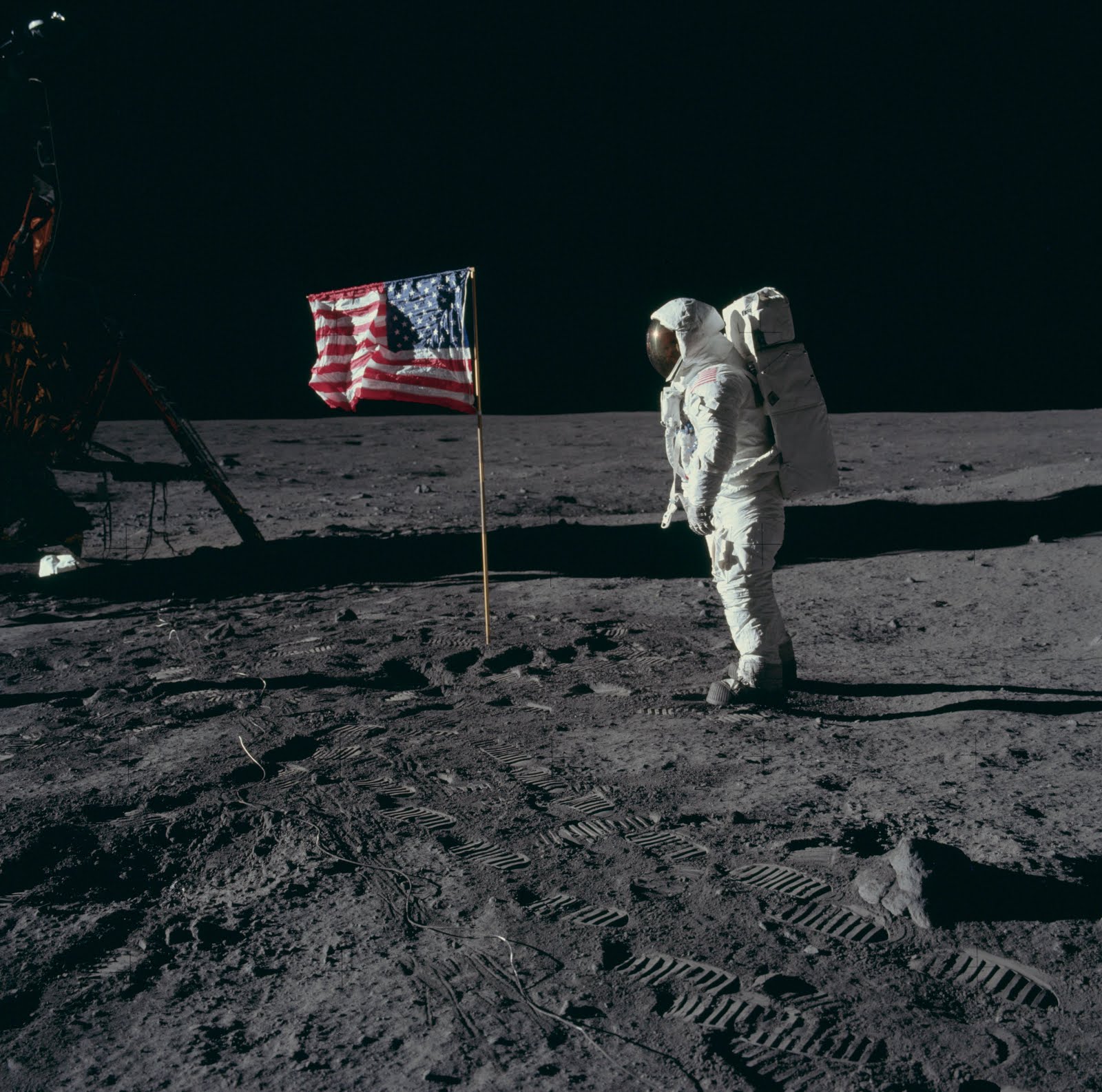 
However, there are logical flaws in the claim that the flag was added and the fakers forgot to add its shadow. First of all, how could the fakers possibly have forgotten to take such an iconic image as a salute to the Stars and Stripes? And if they faked it, why would they have been so spectacularly dumb as to forget to add the flag shadow?

Secondly, if the photos were faked in a studio, why would it have been necessary to add the flag by using poorly done cut-and-paste trick photography? It would have been easier to go back to the studio and take a few more photos with the flag in place.

Thirdly, there is TV and 16 mm film footage of Aldrin’s salute to the flag. So why risk exposure by faking two photographs of the salute, when there are video and color movie records of this historic moment?

Figure 5.9-4. Apollo 11 film footage of the flag salute, recorded by the LM-mounted 16 mm camera at the rate of one frame per second. 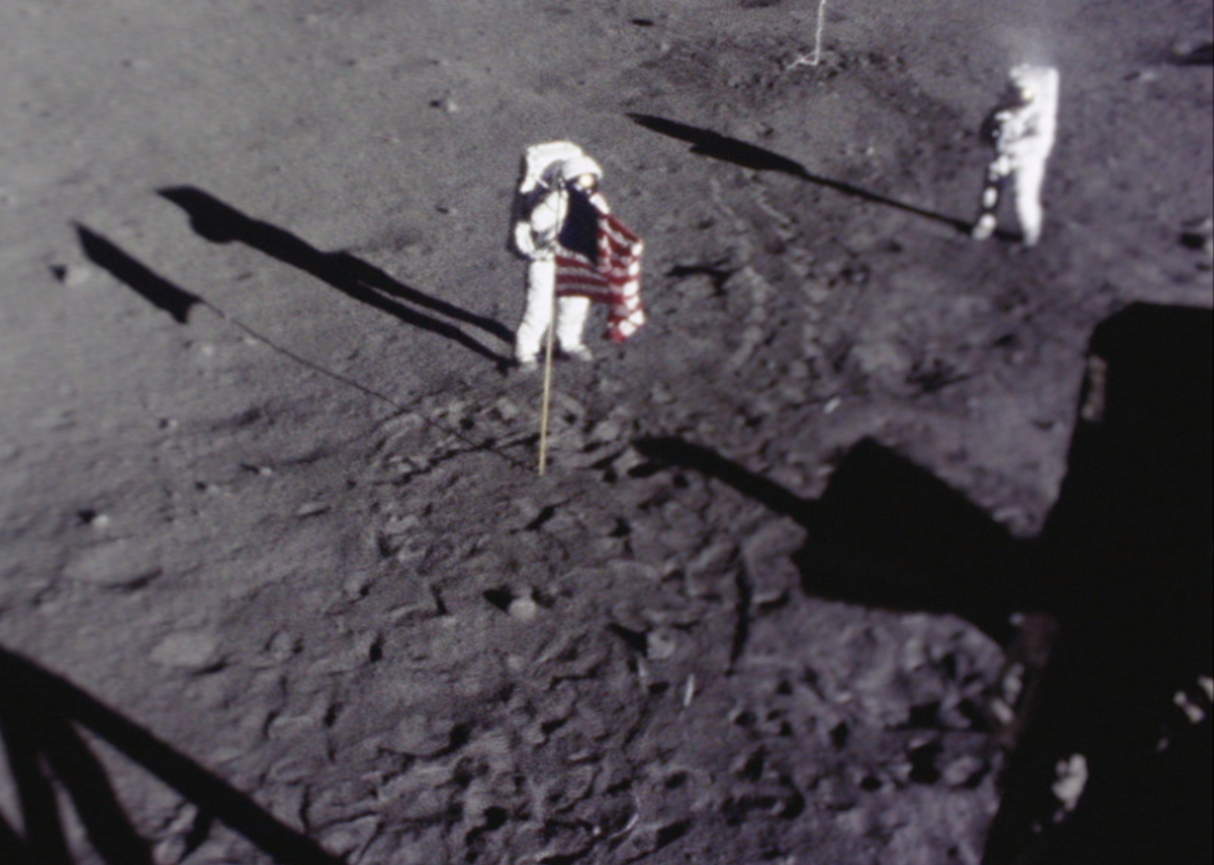 Figure 5.9-5. A frame from the 16 mm film shows Aldrin’s salute. Aldrin is behind the flag, with his right arm is raised in salute, as evidenced by the arm’s shadow. Armstrong is in the upper right corner, taking photographs. The white vertical rod at the top margin is the TV camera tripod. The large dark region on the right is the silhouette of the Lunar Module, which partly covers the shadow of the solar wind experiment (the vertical rectangle on the left in the live TV broadcast).


These two recordings allow to reconstruct the scene in detail and check the perfectly matching positions of the shadows, of the rocks and of other details of the terrain. The 16 mm footage very clearly includes the shadow of the flag and of its pole.

This reconstruction allows to determine the very simple reason why the shadow of the flag is missing in the two photographs: it lies outside the viewing field of the camera, beyond the right margin of the picture, because the Sun was low on the horizon and therefore all the shadows were very elongated. Calculations and documents indicate that the elevation of the Sun above the horizon, at the Apollo 11 landing site between July 20 and 21, 1969, ranged from 14° to 15.4°.

The shadow of the flag falls off camera, but what about the shadow of the flagpole? It turns out that it actually is visible in the photos, as it should be, but only in their high-quality scans (Figure 5.9-6): it’s the thin dark line behind the astronaut’s legs, roughly at ankle height. The rod was only about 2.5 centimeters (1 inch) thick, so it cast a very thin shadow, especially when viewed sideways as in the photograph in dispute.

Figure 5.9-6. Annotated detail of AS11-40-5874 (Apollo 11). The very thin shadow of the flagpole is faintly visible above the shadow of Aldrin’s legs, running horizontally across.


The flagpole shadow is rather hard to locate because it’s not where you expect it to be, i.e., at the same level as the base of the pole: a shallow depression in the ground bends it, so it’s further down. The depression in which the shadow of the flagpole falls is shown in Figure 5.9-7. This is the same hollow that alters the length of the astronauts’ shadows, as described in Section 5.7, Why do the astronauts cast shadows of different lengths?


As further verification, since the two photographs (5874 and 5875) were taken by Neil Armstrong from two slightly different positions, they can be used to create a stereo image and check that the flag is not simply added but is actually on the correct plane of depth within the scene. 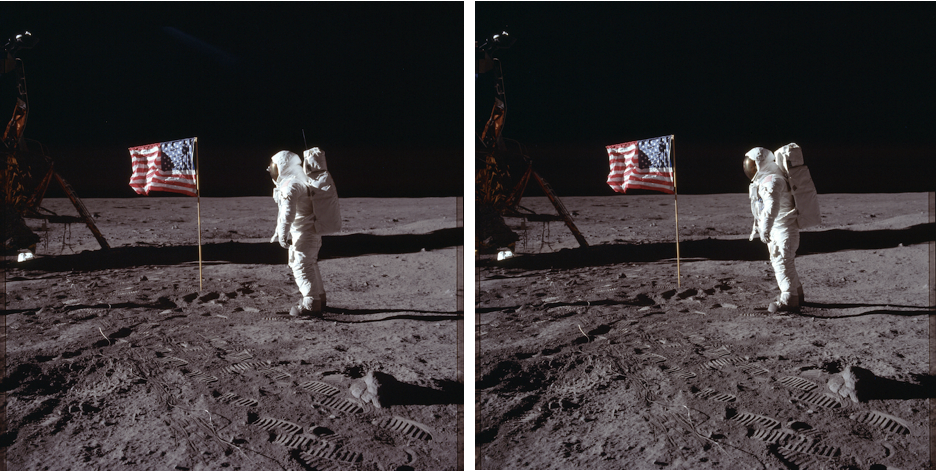 
The 3D placement of the flag is correct and consistent in the two photographs. Anyone attempting to fake these images would have had to include this detail. This is another example of how hard it would have been to create a fake.


Leaving conspiracy theories aside for a moment, all this cross-checking reveals a nice detail: in AS11-40-5875, Aldrin isn’t staring into nothingness, but he’s looking into the camera. This is clearly noticeable in the enlarged detail views shown in Figure 5.9-9: the outlines of Aldrin’s face are clearly identifiable, and so is the white path of the “Snoopy cap”, the soft cap that contained the astronaut’s headset and microphones for radio communications. 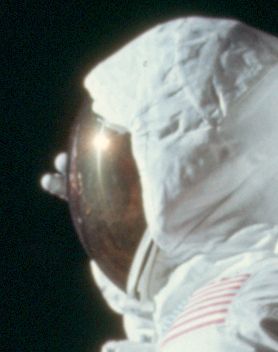 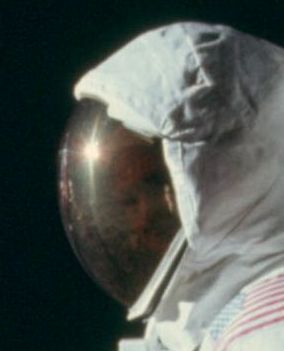 
There are very few photographs of the lunar astronauts in which their faces can be seen. Their features were usually hidden by the reflective gold visor, which was raised only occasionally in order to avoid dazzling and overheating. This is an even rarer event, since the visor is lowered but Aldrin’s face is in full sunlight and therefore receives enough light to become visible even through the thin gold coating of the visor.

NEXT: 5.10 How come the spacecraft casts an impossibly huge shadow?