IN A NUTSHELL: Because these belts are not as deadly as they’re often made out to be and also because they’re belts, so you can fly around them. Russian spaceflights flew animals through them without problems. NASA also conducted sensor-laden uncrewed test flights to measure the effectiveness of the shielding of the Apollo command module. The trajectories of all the moonshots were calculated to fly around the core of these donut-shaped belts and pass rapidly through their less intense outer portions. The astronauts on the International Space Station periodically pass through parts of these belts and they don’t die.


THE DETAILS: Many Moon hoax proponents claim that any crewed lunar mission would be impossible due to the allegedly lethal barrier of the Van Allen belts, two regions of radiation that wrap around the Earth at distances that can vary according to solar activity but are roughly located between 100 and 10,000 kilometers (62 to 6,200 miles) for the more intense inner belt and between 18,000 and 60,000 kilometers (11,100 to 37,000 miles) for the weaker outer belt (Figure 8.1-1).

Figure 8.1-1. An illustration of the Van Allen belts, with the confined charged particles (in blue and yellow) and the boundary of the plasmapause (blue-green surface). Credit: NASA Scientific Visualization Studio.


Vintage technical literature on the subject (for example the papers listed in the References chapter of this book) shows that the potential danger posed by the Van Allen belts was well-known when the lunar missions flew, since the belts had been discovered in 1958 by United States physicist James Van Allen (1914-2006). The issue was considered perfectly manageable with a few precautions, as described in the January 1969 report Radiation Plan for the Apollo Lunar Mission.

The estimates made by the experts proved to be correct: in 1968, the Soviet space probe Zond 5 flew through the Van Allen belts to carry around the Moon several living creatures, which returned unharmed from their voyage.

For the Apollo missions, exposure during the crossing of the Van Allen belts was calculated and measured by means of uncrewed test flights: specifically, Apollo 6 (April 1968) carried into Earth orbit an Apollo capsule equipped with instruments for measuring the capability of the spacecraft to block the radiation from the belts. It was found that the exposure was comparable to the effects of a few medical X-rays and therefore was quite tolerable for short periods.

The very first human beings to fly beyond the Van Allen belts were the astronauts of Apollo 8. According to NASA’s Biomedical Results of Apollo report (1975), over the course of the entire flight Lovell, Borman and Anders accumulated a radiation dose of 1.6 millisieverts. This is the equivalent of about twenty chest X-rays and is therefore far from being immediately lethal as some conspiracy theorists argue.

In other words, the actual level of risk entailed by the Van Allen belts was well-known and tested long before the Moon landings.

For comparison, according to the US National Council on Radiation Protection and Measurement the annual average radiation dose per person in the United States is 6.2 millisieverts; 52% of this is of natural origin.

We don’t have to take NASA’s word about the Van Allen belts. There is clear consensus in the science community on the matter, as shown for example by the article The Van Allen Belts and Travel to the Moon by Bill Wheaton (2000), specialist in gamma ray astronomy at the Jet Propulsion Laboratory (JPL).

Wheaton provides objective data regarding radiation in space and specifically in the Van Allen belts. It turns out that the data published by NASA on this subject must be true, otherwise today’s automatic satellites would be fried, since they fly through the belts and their equipment, if not shielded adequately against radiation, will malfunction.

James Van Allen, from whom the belts get their name, had already stressed, as early as 1960 in the article On the Radiation Hazards of Space Flight, that these belts don’t encase the entire planet from pole to pole, but form a sort of donut that fades in intensity from approximately 30° above and below the Earth’s equator. Therefore, to fly around them or pass through their weaker regions it is sufficient to use an adequately inclined trajectory, which is what all the Apollo spacecraft did, both on the way to the Moon and on the way home (Figure 8.1-2). 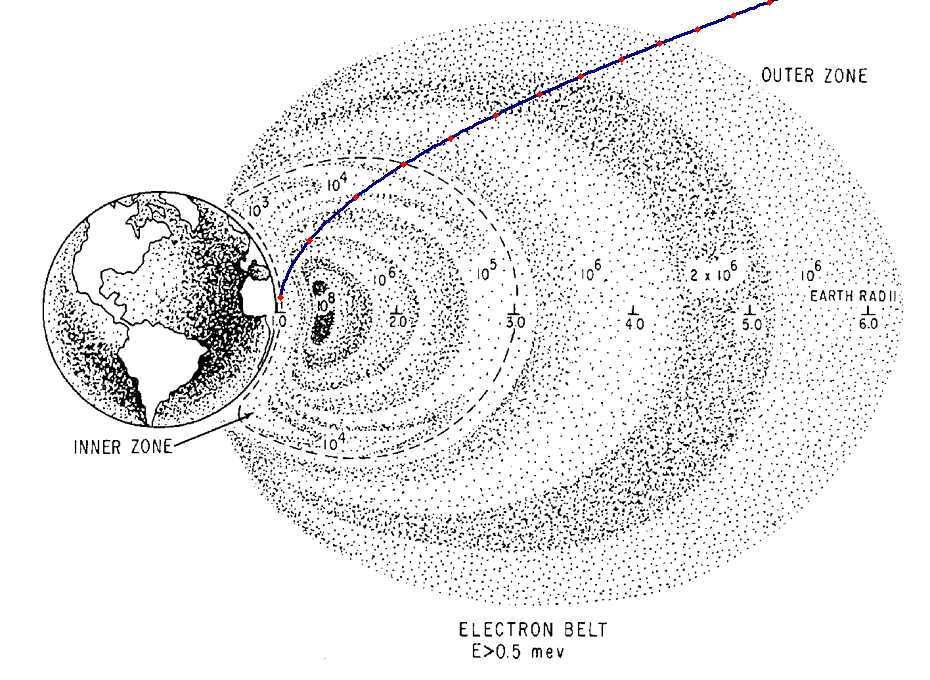 
Records show that Apollo 11’s transit through the Van Allen belts lasted a total of 90 minutes, flying around the region of maximum intensity in about ten minutes.


Many conspiracy theorists and doubters who claim that the Van Allen belts are an impassable barrier are unaware of a fact that undermines their argument completely: the astronauts of the International Space Station periodically fly through a protrusion of these belts known as the South Atlantic Anomaly.

The Van Allen belts aren’t as clear-cut and uniformly arranged as often shown in schematic illustrations. Over the South Atlantic they reach far closer to Earth than their average distance from the planet (Figures 8.1-3 and 8.1-4). They actually encroach the orbit of the Space Station, approximately 400 kilometers (250 miles) from the Earth’s surface, and reach down to an altitude of just 200 kilometers (125 miles).

Figure 8.1-4. The South Atlantic Anomaly in an animation of the European Space Agency.


Accordingly, the Station passes through this region of the Van Allen belts every time it flies over the South Atlantic, as it does periodically in its highly inclined orbit (51.6°) with respect to the Earth’s equator. If the belts were as lethal as conspiracy theorists claim, the occupants of the Space Station would die on board, since they cross this region many times during their six-month or year-long missions, whereas the Apollo astronauts crossed the outer regions of the belts only twice per mission.

The shielding of the Space Station greatly reduces the exposure of the astronauts to the high-energy particles of the Van Allen belts, but it doesn’t protect the external TV cameras of the Station, which often broadcast live on the Internet. This produces a weird phenomenon: since electronic components can be affected by the charged particles of the belts, their effects on the sensors of these TV cameras can be watched live, as shown in the videos of Figures 8.1-5 and 8.1-6, which give the impression of snow falling at night.


Figure 8.1-5. On the left, the image broadcast by the external TV cameras of the Space Station on December 30, 2014, at 1:40 CET; on the right, the location of the Station during the broadcast. The dots and streaks are the effect of charged particles on the camera sensors.


The sensitivity of electronic components to charged particles is an aspect of the Van Allen belts that is often ignored by nonexperts and is a technical problem that needs to be handled by any satellite that flies through the belts frequently. These particles, for example, can alter the values stored in a computer memory, causing malfunctions and restarts, or can damage permanently the sensors of a still camera or TV camera, as reported by astronaut Don Pettit:

Free from the protection offered by the atmosphere, cosmic rays bombard us within Space Station, penetrating the hull almost as if it was not there. They zap everything inside, causing such mischief as locking up our laptop computers and knocking pixels out of whack in our cameras. The computers recover with a reboot; the cameras suffer permanent damage. After about a year, the images they produce look like they are covered with electronic snow.


In February 2003, a member of the Cosmoquest forum reported that he had written to James Van Allen asking for information on the effects that belt radiation might have had on astronauts and that he had received the following answer:

In reply to your e-mail, I send you the following copy of a response that I wrote to another inquiry about 2 months ago --

- The radiation belts of the Earth do, indeed, pose important constraints on the safety of human space flight.

- The very energetic (tens to hundreds of MeV) protons in the inner radiation belt are the most dangerous and most difficult to shield against. Specifically, prolonged flights (i.e., ones of many months' duration) of humans or other animals in orbits about the Earth must be conducted at altitudes less than about 250 miles in order to avoid significant radiation exposure.

- A person in the cabin of a space shuttle in a circular equatorial orbit in the most intense region of the inner radiation belt, at an altitude of about 1000 miles, would be subjected to a fatal dosage of radiation in about one week.

- However, the outbound and inbound trajectories of the Apollo spacecraft cut through the outer portions of the inner belt and because of their high speed spent only about 15 minutes in traversing the region and less than 2 hours in traversing the much less penetrating radiation in the outer radiation belt. The resulting radiation exposure for the round trip was less than 1% of a fatal dosage - a very minor risk among the far greater other risks of such flights. I made such estimates in the early 1960s and so informed NASA engineers who were planning the Apollo flights. These estimates are still reliable.

- The recent Fox TV show, which I saw, is an ingenious and entertaining assemblage of nonsense. The claim that radiation exposure during the Apollo missions would have been fatal to the astronauts is only one example of such nonsense.


In 2004, Jay Windley of Clavius.org wrote to professor Van Allen, asking him to authenticate this reply and received handwritten confirmation from the scientist (Figure 8.1-7): “This is a completely correct quotation from my letter”. 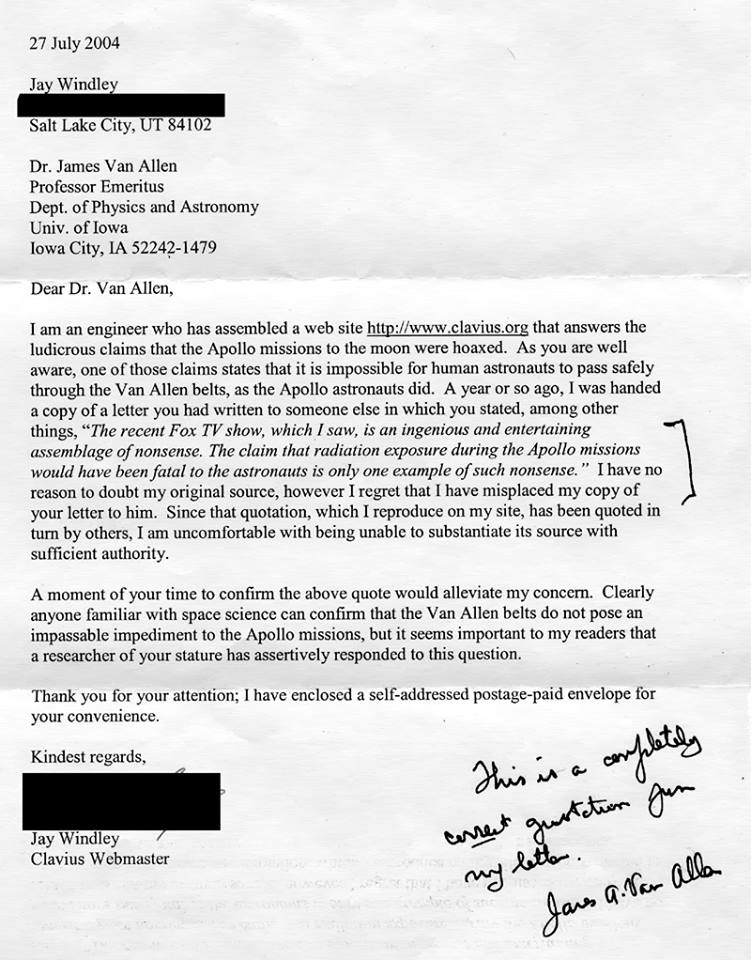 
NEXT: 8.2 If the Van Allen belts weren’t a problem for Apollo, why does NASA need to test the new Orion spacecraft?