IN A NUTSHELL: No. The mathematical analysis of the Saturn V liftoff footage published by Stanislav Pokrovsky estimates the power of the first stage, but the trip to the Moon depended on the power of the third stage.


THE DETAILS: A complex, math-heavy analysis* published in Russian by Stanislav Pokrovsky argues that the actual speed of the Saturn V Moon rocket when it exhausted the fuel of its first stage and separated from the rest of the spacecraft was only half of the speed claimed by official documents.


* УТОЧНЕННАЯ ОЦЕНКА СКОРОСТИ САТУРНА-5, Supernovum.ru, 2014; available in English as Investigation into the Saturn V velocity and its ability to place the stated payload into lunar orbit at Aulis.com. In the English version, Pokrovsky is described as a “Ph.D,” “Candidate of Technical Sciences” and “General Director of scientific-manufacturing enterprise Project-D-MSK”.


Pokrovsky claims that the F-1 engines of the Saturn’s first stage were not powerful enough to carry to the Moon the 46-ton payload constituted by the Command and Service Module and the Lunar Module. His calculations suggest that the low speed entailed that the maximum payload that could be delivered to the Moon by a Saturn V was approximately 28 tons. Since the CSM weighed over 30,000 kilograms (66,000 pounds) and the LM weighed over 15,000 kilograms (33,000 pounds), Pokrovsky argues that NASA could fly one or the other, but not both, to the Moon, and therefore the best it could achieve was a flight around the Moon, without landing.

However, despite the impressive charts and formulas, this analysis has a fundamental flaw. Pokrovski’s calculations and estimates relate only to the Saturn V’s first stage. But this stage, together with the second stage, only had the task of placing the third stage and the Apollo spacecraft into Earth orbit (with some help from the third stage). The first two stages did not contribute to the actual trip from Earth orbit to the Moon, which was instead powered by the third stage.

Since Pokrovsky acknowledges that Earth orbit was achieved by the Saturn V‘s first two stages with its full 46-ton payload of Apollo vehicles (otherwise the first stage would not have lifted off so slowly as Pokrovsky himself argues), all his remarks and calculations regarding the actual or alleged speed of the first stage are simply irrelevant in terms of how many tons of payload could be sent to the Moon.

In the laws of physics that govern orbital flight, what matters is the final speed of a spacecraft, which must be sufficient to stay in orbit without falling back to Earth. The speed during the climb to altitude is only relevant in terms of fuel consumption and crew comfort: a faster climb uses less fuel, but subjects the astronauts to higher acceleration stresses (up to 4.7 g for the Saturn V just before first stage separation; Gemini’s Titan launchers reached 7 g). In principle, a slow climb to orbital altitude followed by acceleration to orbital speed would still achieve orbit. Therefore Pokrovsky’s issue of first stage speed is irrelevant.

Moreover, Pokrovsky’s argument is based on an estimate of the progressive apparent distance between the Saturn V and the exhaust plume of the first-stage retrorockets; an estimate made purely by examining blurry footage from one of NASA’s tracking cameras (Figure 7.10-1). It is quite hard to measure the exact point where a rocket plume ends. 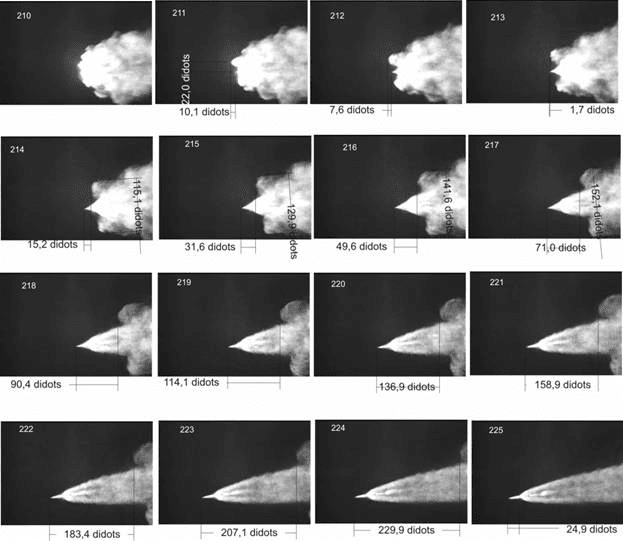 Figure 7.10-1. The low-resolution frames of the liftoff footage analyzed by Pokrovsky.


Moreover, Pokrovsky assumes that the retrorocket plume somehow stopped in mid-air, instantaneously losing the tremendous speed of the spacecraft that generated it, and therefore can be used as a fixed reference point to calculate the speed of the Saturn V rocket. But the first stage separated from the rest of the spacecraft (Figure 7-11) at an altitude of over 61,000 meters (200,000 feet), where the atmosphere is approximately 10,000 times thinner that at sea level, so there was no significant air resistance to slow the plume or stop it. Presumably, by inertia this plume would continue to climb, chasing the rocket and thus biasing any visual estimate of distance and speed. 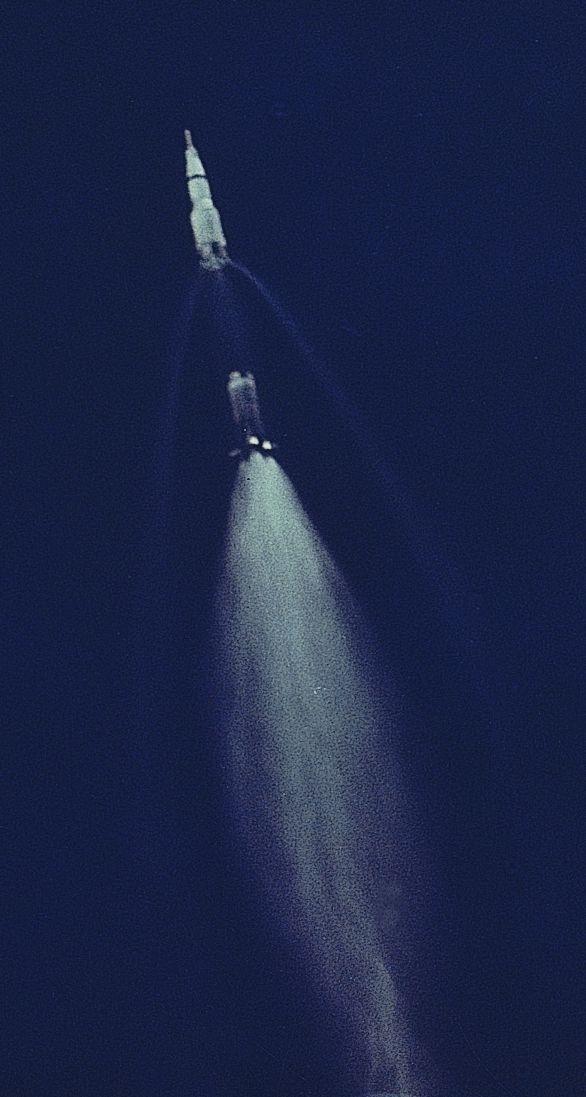 NEXT: 7.11 How could the tiny LM climb back from the Moon?