6.12 Why is there no exhaust from the LM’s ascent rocket engine?

IN A NUTSHELL: Because there shouldn’t be. Rocket motors don’t generate a fiery exhaust in the vacuum of space. Rockets that use the same propellant as the Lunar Module don’t generate a visible plume even in the Earth’s atmosphere. The same effect occurred with the Shuttle main engines and with Gemini Titan rockets, for example.


THE DETAILS: Bill Kaysing, in Fox TV’s Did We Land on the Moon? (2001), objects that “In the footage of the ascent stage going up, what you don’t see is an exhaust plume coming out of the rocket engine nozzle... What do we see? We see the ascent stage suddenly pop up without any exhaust plume whatsoever as though it were jerked up by a cable”.


Figure 6.12-1. Liftoff of the Apollo 17 Lunar Module on 14 December 1972, as shown by the live TV broadcast sent by the remote-controlled camera installed on the Rover.


It’s true that the liftoff footage doesn’t match the illustrations that NASA published in 1966, showing a very conspicuous plume under the Lunar Module’s ascent stage (Figure 6.12-2). 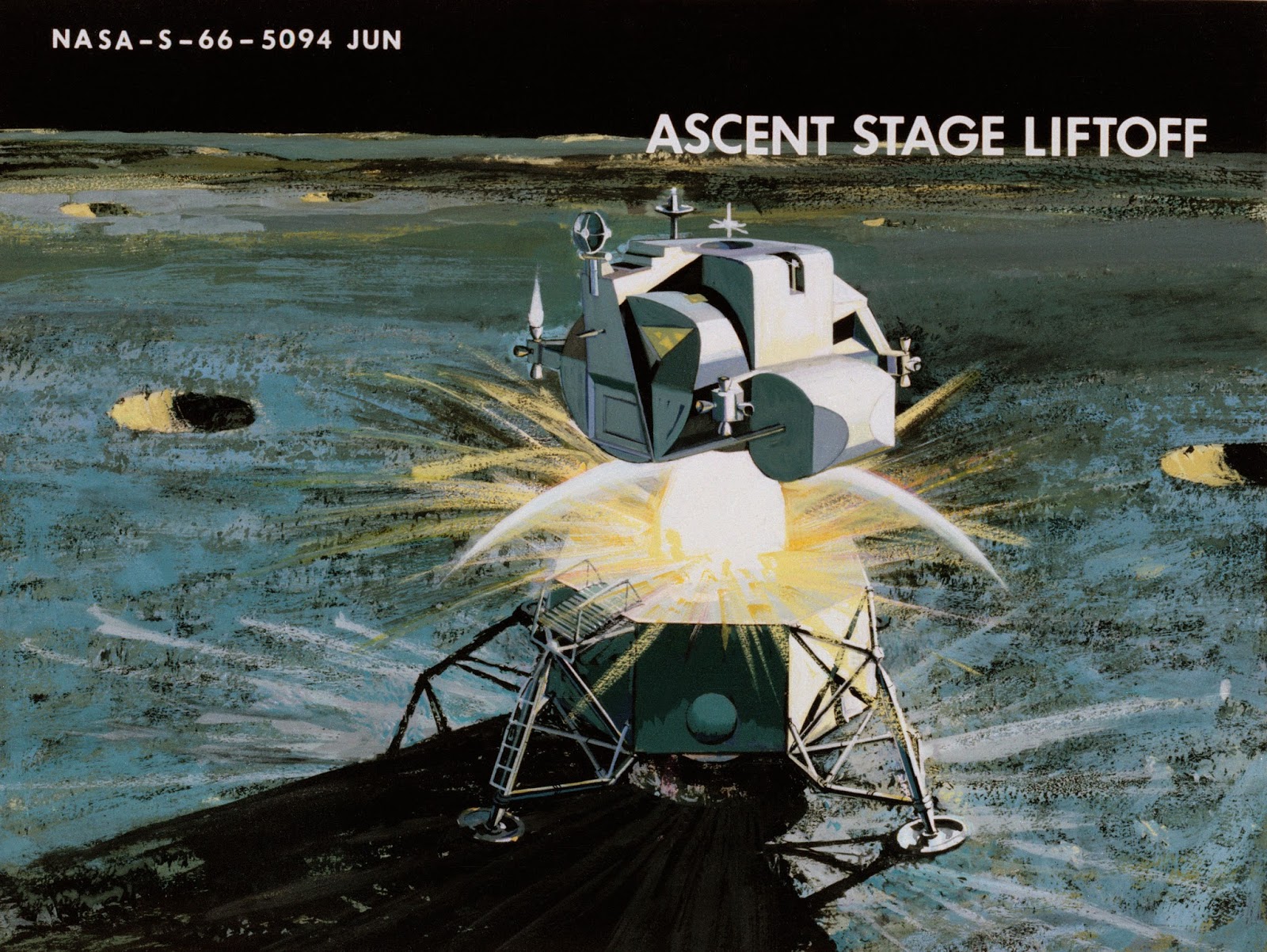 
Actually, there’s no visible exhaust plume in the TV footage for a very simple reason: there shouldn’t be one. Rockets don’t usually produce persistent and extensive plumes in the vacuum of space. Artist’s illustrations are, indeed, art, and as such they take liberties in order to represent motion and explain what’s going on. If the drawing shown in Figure 6.12-2 didn’t show a plume, the general public for whom it was intended would have seen a spacecraft mysteriously floating above the Moon. Adding the plume is not scientifically accurate, but it’s a self-explanatory way to illustrate the fact that the spacecraft is being propelled by its rocket motor.

The lack of a plume in vacuum is documented for example in the footage from the Saturn V test flights, the authenticity of which is not disputed by conspiracy theorists (Figure 6.12-3).

Figure 6.12-3. Separation of the first stage of a Saturn V. The rocket engines of the second stage are ignited but don’t produce plumes.

Figure 6.12-4. Slow motion footage of the ignition of the S-IVB second stage of a Saturn 1B rocket during test mission AS-202, as viewed by an automatic film camera installed inside the top portion of the first stage. After a brief ignition blast, this rocket engine also doesn’t produce a visible plume in vacuum.


Recent space flights, such as SpaceX’s Falcon 9 booster missions, likewise have no plume once they’re out of the Earth’s atmosphere. This can be seen for example in Figure 6.12-5, which is a still from the 2018 launch of satellite Paz. 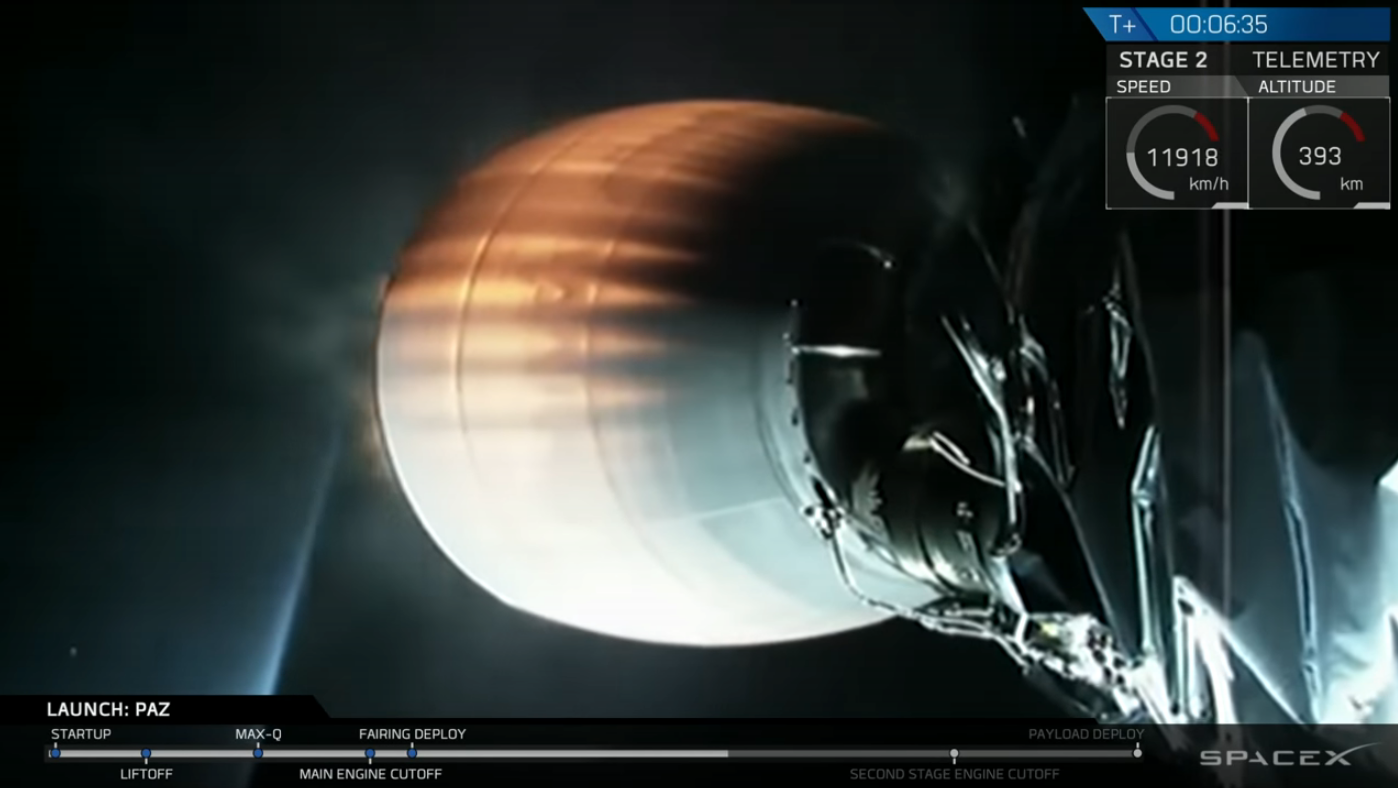 Figure 6.12-5. The motor of the second stage of SpaceX’s Falcon 9 rocket is firing, as shown by its red-hot nozzle, but it doesn’t produce a plume in the very thin air it encounters 393 km (244 miles) above the Earth. Source: SpaceX live broadcast.


Moreover, the Apollo LM used a mix of Aerozine 50 (50% hydrazine, 50% unsymmetrical dimethyl hydrazine) and dinitrogen tetroxide, which are hypergolic, i.e., they react spontaneously as soon as they come into mutual contact. This allowed a simple and highly reliable engine design. The product of the reaction of these substances is colorless and transparent: that’s another reason why there’s no visible plume under the LM as it takes off from the Moon.

The same type of propellant used in the LM was also used in the massive Titan launchers used in the Gemini manned spaceflight program (and also used as nuclear warhead delivery missiles), and their liftoffs produced a surprisingly small and colorless plume, with no flames, even in air (Figure 6.12-6).

Figure 6.12-6. Liftoff of a Titan rocket carrying the Gemini 12 spacecraft on November 11, 1966. Note the almost colorless engine exhaust and the lack of flames.


The Space Shuttle’s maneuvering thrusters also used hypergolic propellants and likewise produced no significant plume. Its three main engines also produced an almost colorless exhaust plume as they burned hydrogen and oxygen, whereas its solid-propellant side boosters generated a massive, fiery trail, as shown in Figures 6.12-7/8/9. 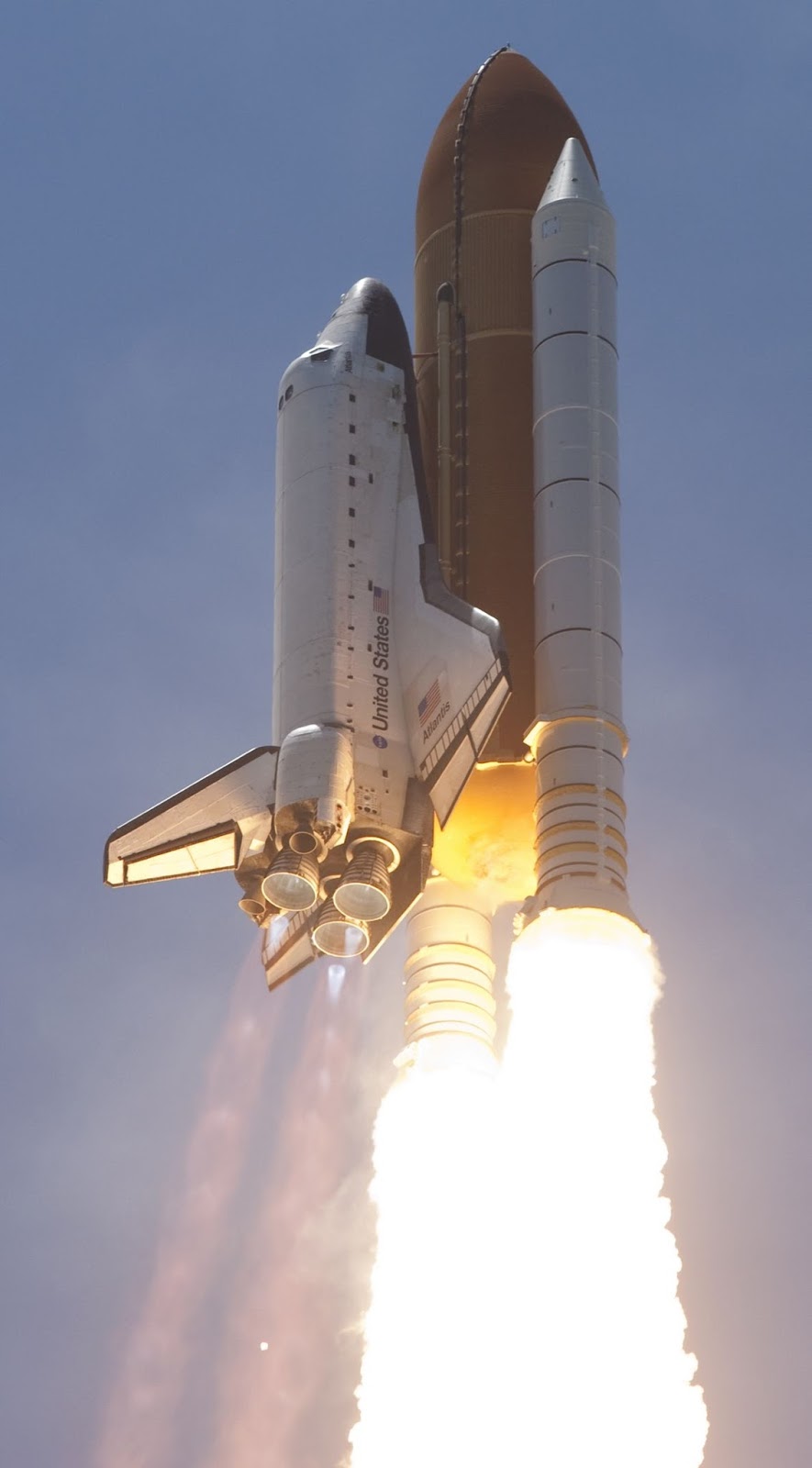 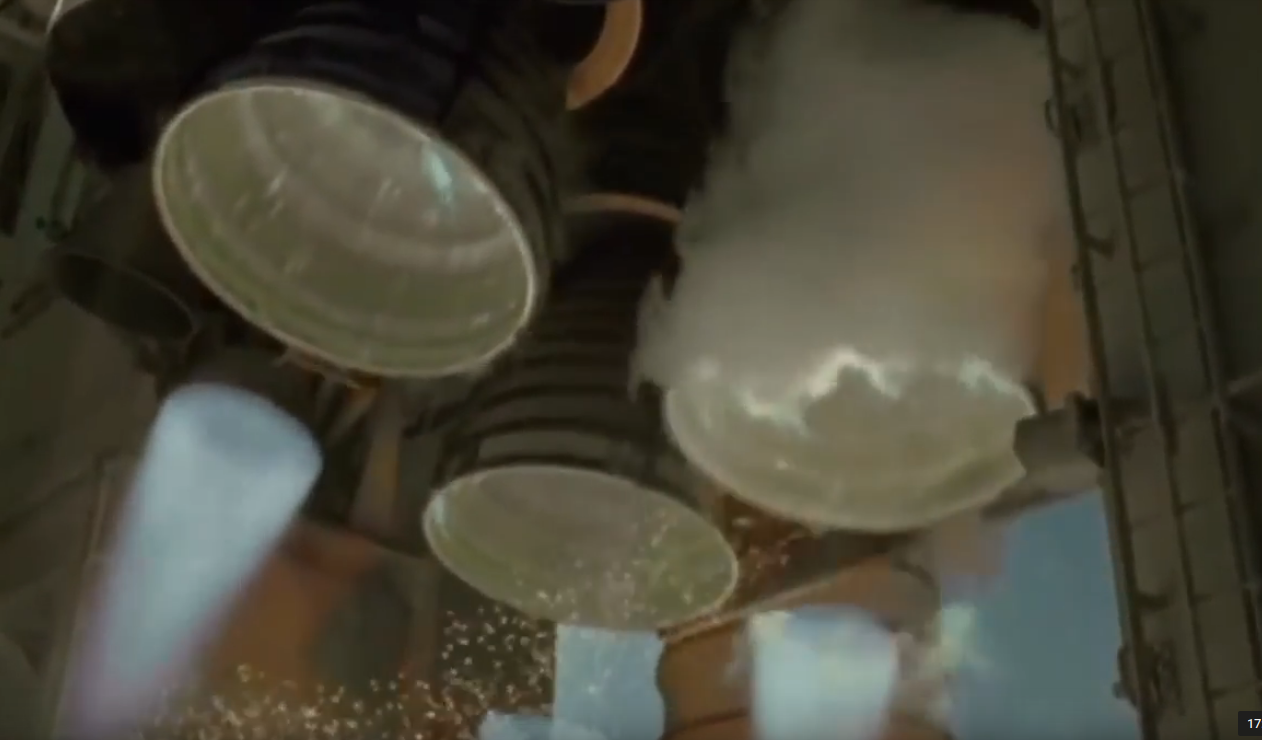 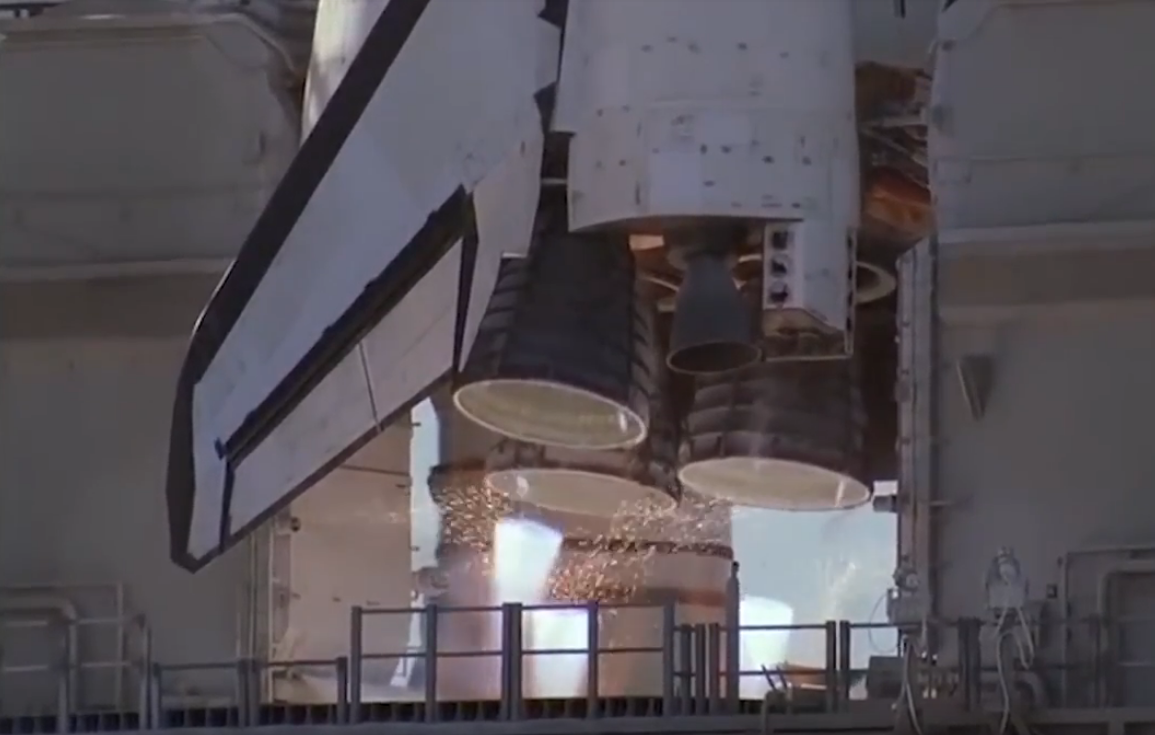 Figure 6.12-9. Another view of the Shuttle main engines at ignition, showing the see-through exhaust (source: FSG). 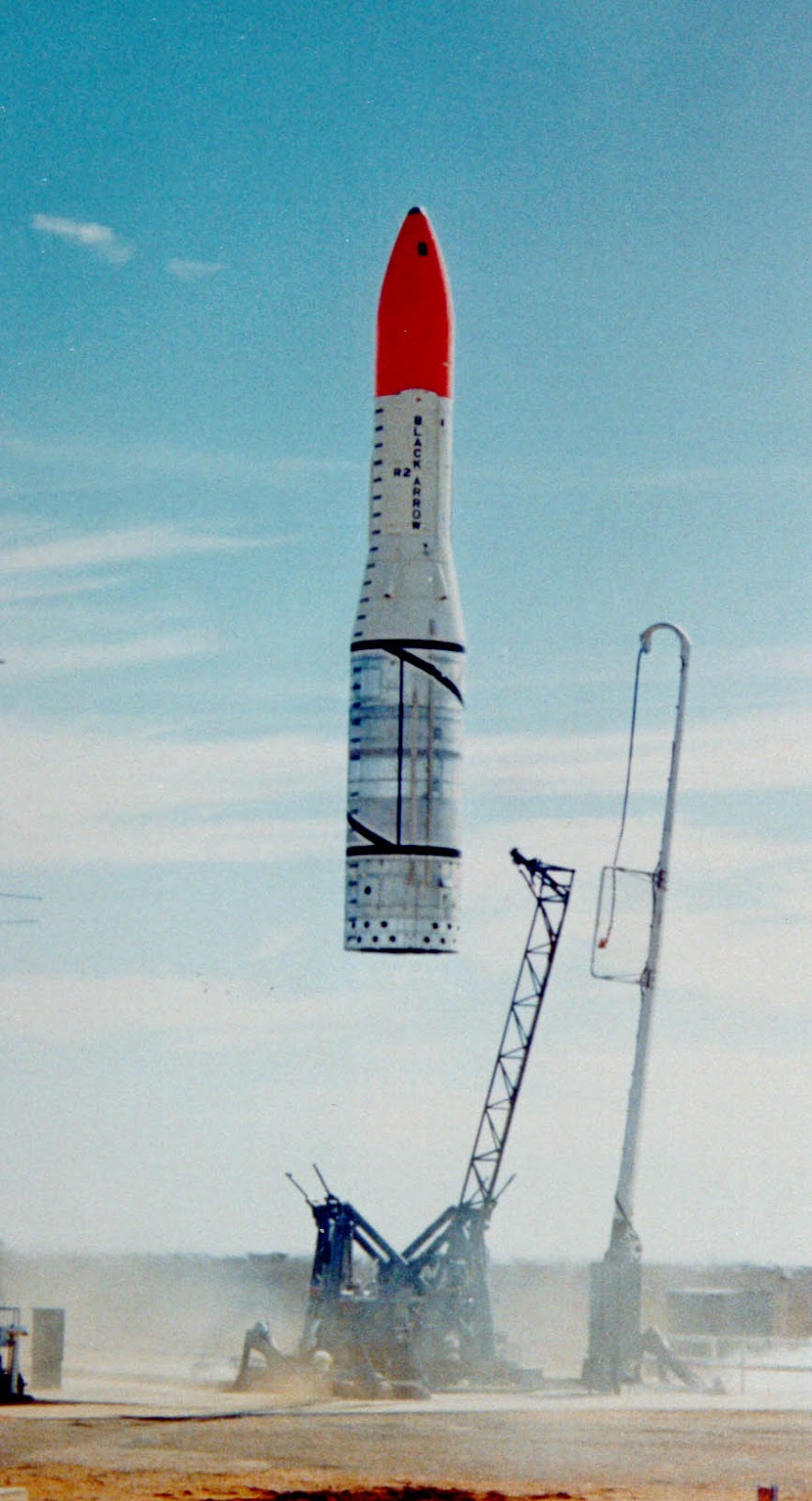 NEXT: 6.13 Why did Apollo 11 transmit color TV from space but not from the Moon?