Even the best visual effects of today often fail to recreate authentically and simultaneously all the physical phenomena observed in the original Apollo lunar footage.

For example, Michael Bay’s blockbuster Transformers - Dark of the Moon (2011), in which the Apollo 11 mission plays a key part and is reconstructed extensively, gets the lunar dust wrong: Neil Armstrong’s first step kicks up a cloud of dust, revealing that the scene was not shot in vacuum.

Figure 3.14-1. A still from Transformers 3 reveals a mistake in the special effects: the moondust billows instead of falling in arcs, as it should in a vacuum. Credit: Paramount Pictures.


The TV series From the Earth to the Moon (1998), produced by Tom Hanks, Ron Howard and Brian Grazer, is considered one of the most accurate reconstructions of the moonwalks, which were simulated in a huge soundstage by attaching large helium-filled balloons to a harness inside the spacesuits, so as to give the astronaut-actors a visual buoyancy similar to lunar gravity.

The sharply outlined shadows of the original Apollo images were obtained by lighting the entire set with a single light source: a 2-meter (6-foot) convex mirror onto which twenty of the most powerful spotlights available in the film business projected their beams. The production even featured an original lunar module, a leftover of the canceled Apollo 18, 19 and 20 missions. Yet despite these amazing efforts, the beautiful visual effects sequences of the show lack other phenomena, such as the correct behavior of lunar dust as the astronauts walk.

The IMAX documentary Magnificent Desolation: Walking on the Moon 3D (2005), also featuring Tom Hanks among its producers, finally got the moondust right and also solved the challenge of camera and set reflections in the mirror-finished spacesuit helmet visors. However, these feats were achieved by resorting to digital visual effects, which were not available in 1969. 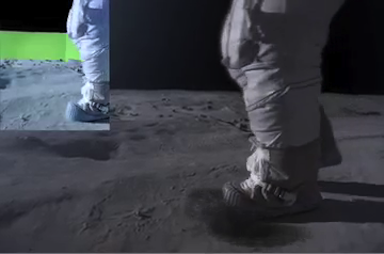 Figure 3.14-2. Digitally generated moondust being kicked up by an astronaut in Magnificent Desolation: Walking on the Moon 3D. Credit: IMAX Corporation.