Moon hoax theorists and their claims have achieved significant popularity in many other countries besides the United States.

British film and TV producer David Percy co-authored a book, Dark Moon: Apollo and the Whistle-Blowers (2001), and produced a video, What Happened on the Moon? (2000), alleging varying degrees of fakery.

French writer Philippe Lheureux argued in his book Lumières sur la Lune (“Lights on the Moon”, 2002) that Americans went to the Moon but published fake photographs to prevent other countries from making use of the scientific information gathered by the flights.

German author Gernot Geise published three books, Der Mond ist ganz anders (“The Moon is completely different”, 1985, republished in 2003), Die dunkle Seite von Apollo (“The dark side of Apollo”, 2002, republished in 2006), and Die Schatten von Apollo (“The shadow of Apollo”, 2003), arguing not only that the Moon landings were faked, but that key facts about the Moon itself, such as its true gravity and the presence of vegetation and ancient buildings, have been kept secret by NASA. 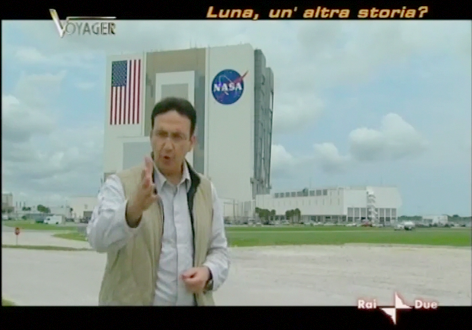 
Italian politician and member of Parliament Carlo Sibilia, of the Five Star Movement, in 2014 stated on Twitter that “nobody has the courage to say that [the Moon landing] was a farce”. In 2018, while acting as undersecretary for the Ministry of the Interior (or Home Office) of the Italian government, Sibilia confirmed his claims in an interview to the newspaper Corriere della Sera, stating that the Moon landing was “a controversial episode”.

Several US celebrities have endorsed Moon hoax theories. Actress Whoopi Goldberg did so on the TV show The View (2009). Basketball player Carl Everett (2000), TV presenter and comedian Joe Rogan (2010), rapper Mos Def (2008) and writer Margaret Atwood have at the very least publicly questioned the authenticity of the Moon landings.*

Several Russian authors, such as journalist and politician Yuri Mukhin and science professionals such as Alexander Popov and Stanislav Pokrovsky, have also voiced their claims of conspiracies in articles, books and websites.

NEXT: 4.13 The four fundamental hoax scenarios