IN A NUTSHELL: Because it’s very difficult, very expensive and very dangerous, and there’s no longer a political imperative that justifies risking lives and devoting massive resources to the challenge as it did in the 1960s. The Cold War is over; the Soviet Union, once the rival to beat in the space race, no longer exists. There’s no non-political reason to go back with crewed missions; robots can do the job far more cheaply and safely. That doesn’t mean that we can’t, couldn’t or didn’t. Also, 1960s technology wasn’t that primitive: it even included things we don’t have today, such as supersonic airliners.


THE DETAILS: Some conspiracy theorists suggest, with this question, that we don’t goto the Moon because if we did it would become evident that we never went. Others claim that even today it would be technically impossible and therefore it was equally impossible in the 1960s. But there are also honest doubters who simply ask themselves why we don’t repeat the fantastic voyage with today’s far more modern technology.

The answer is disarmingly simple: putting astronauts on the Moon is very difficult, hugely expensive (at least for NASA’s rather measly current budget) and extremely dangerous, and today there’s no political motivation for spending massive amounts of public money and for risking human lives in the world’s spotlight in this way. The disasters of Apollo 1, Soyuz 1 and 11, and of Shuttles Challenger and Columbia have shown all too clearly that the loss of a spacecraft crew is seen as a national tragedy and can be justified only if the stakes are tremendously high.

At the time of the Apollo flights, it was a national imperative to beat the Soviet regime and to rebuild the political and technological prestige of the United States. There’s no such imperative today; there’s no totalitarian enemy superpower to beat. In the 1960s, politicians funded the Moon landings with approximately 170 billion dollars (in current terms) and the lives of the astronauts were considered expendable for the sake of the nation. Thus many technical compromises were made which increased the chances of failure.

For example, Apollo 12 was launched during a storm and was struck twice by lightning, almost killing the crew (Figure 7.1-1). Taking such a risk today would be unthinkable: even uncrewed spacecraft are not launched if there’s even a chance of bad weather. 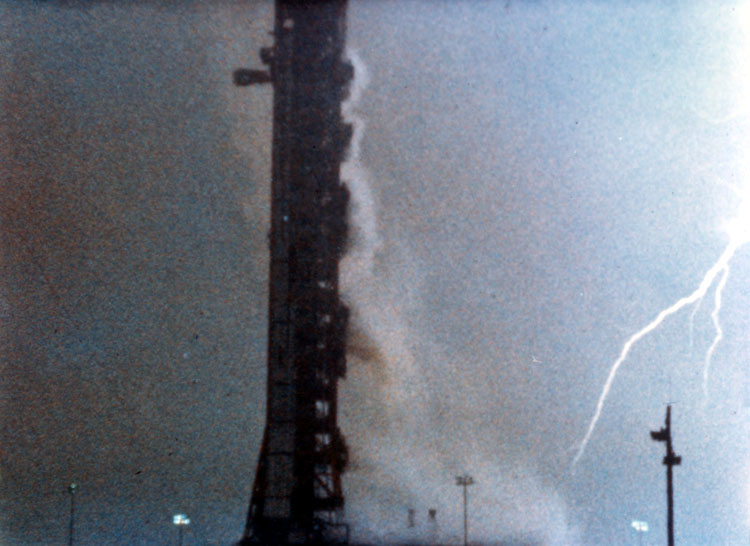 Crucial and delicate rendezvous maneuvers had to be performed in orbit around the Moon, instead of close to Earth, to reduce the launch weight of the spacecraft. But in this way, if the lunar module failed to meet the command module after landing on the Moon, no rescue was possible.

Every mission had its share of malfunctions and near failures. Apollo 13 even suffered a crippling oxygen tank explosion that forced to abort its lunar landing. If the explosion had occurred during return from the Moon instead of on the way out, when onboard reserves were still high and the lunar module was still available as a lifeboat, the outcome would have been fatal.

Today, NASA’s budget is almost halved compared to the Apollo era: in 2010 dollars, the total sum of NASA budgets in the period from 1963 to 1969 was 209.2 billion; from 2003 to 2009 it was 113.1 billion. Moreover, the safety requirements are far more stringent and the loss of a crew is politically far less acceptable. This causes cost increases and slows the development of spacecraft qualified to carry a crew.

The race to beat the Soviets in space ended half a century ago, so space missions are carried out for science rather than for national pride, taking lower risks and using uncrewed spacecraft, which have achieved amazing scientific successes throughout the Solar System; crewed spaceflights have been confined to Earth orbit, for example to assemble and visit the International Space Station.

Right now there is no political, technical or scientific reason that justifies the cost and risk of a crewed return to the Moon. Moreover, for the United States it would be a repeat.

It may seem absurd and implausible that in the 1960s we could do something that we can’t do today, but there are other cases of journeys to remote places that were made once and not repeated for decades.


The apparent contradiction of past technology being superior to today’s is explained by similar cases in other fields. 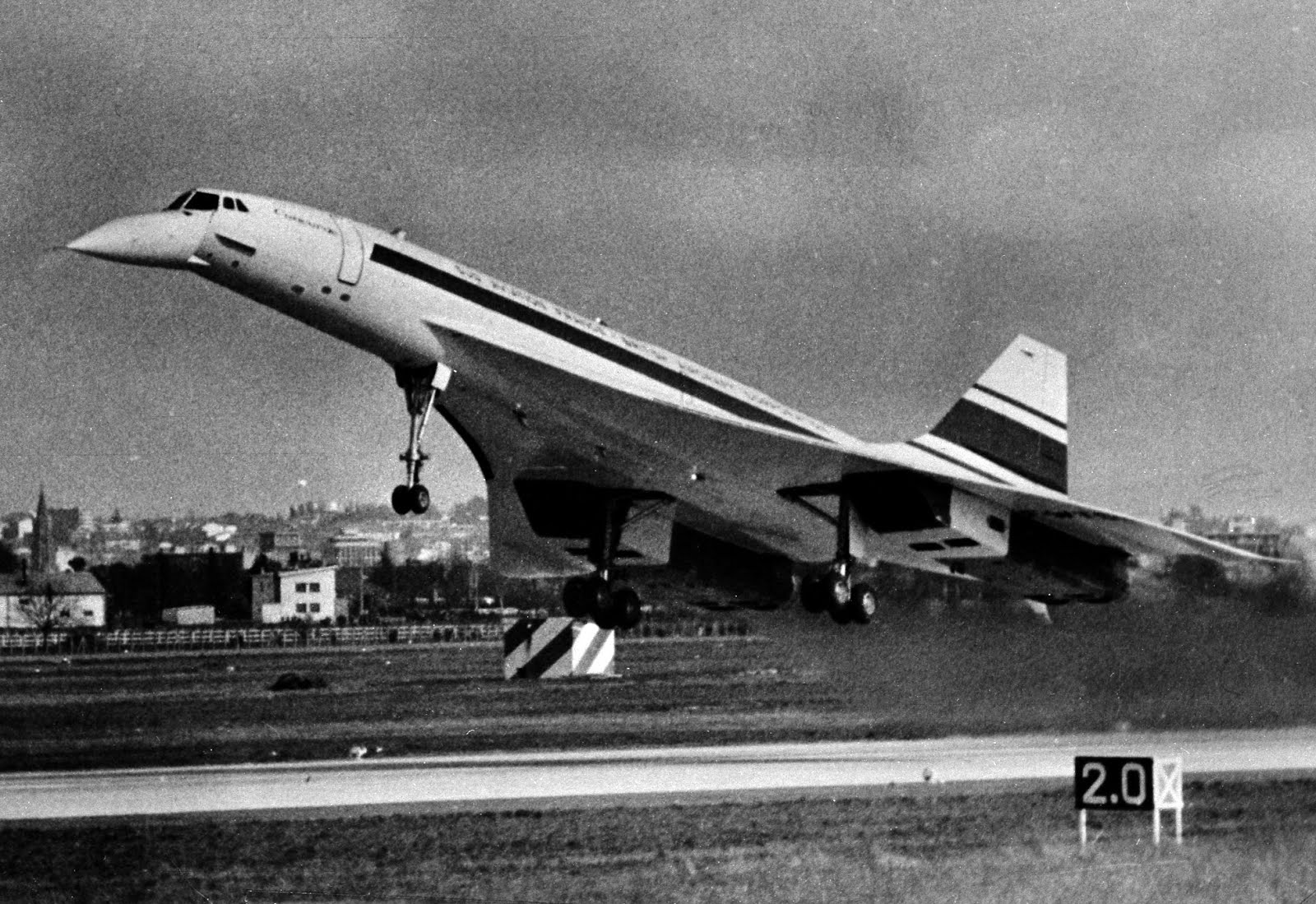 
The reasons for these technological retreats are the same as for Apollo: excessively fragile technologies, no longer sustainable costs and no longer acceptable risk levels.

Anyone who argues that technology in the 1960s wasn’t advanced enough to go to the Moon probably isn’t very familiar with the period. For example, Figure 7.1-3 isn’t a still from a science fiction movies: it’s a photograph of a real US strategic bomber prototype, the XB-70, capable of flying at three times the speed of sound while riding its own shockwave, focused under its wings, to generate lift. It was already flying five years before the first Moon landing. 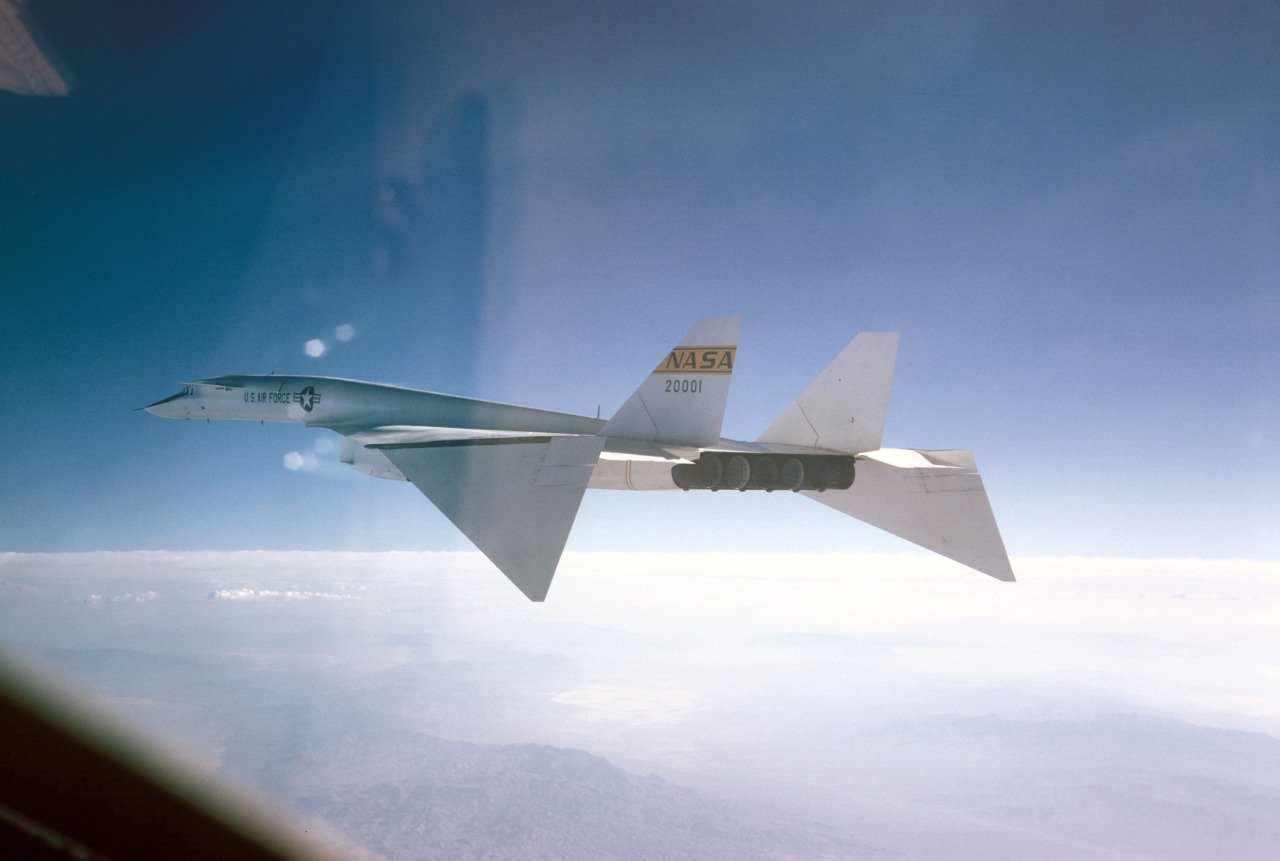 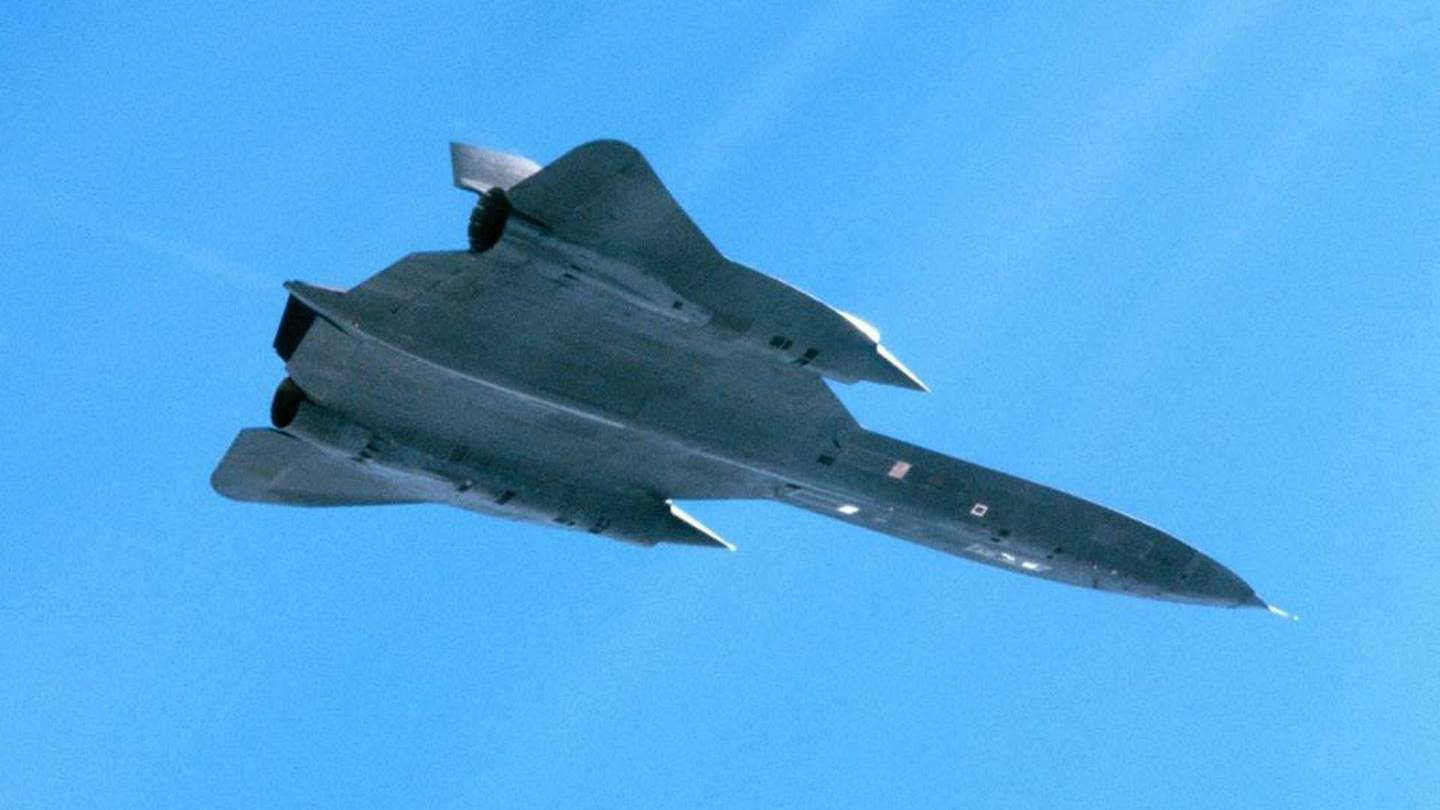 
It’s also worth mentioning the X-15, a rocket-propelled aircraft that was carried by a modified B-52 bomber and was capable of reaching speeds of 7,200 km/h (4,400 mph) and altitudes of 108 kilometers (354,000 feet) and therefore flew beyond the atmosphere: its pilots therefore became astronauts. It debuted in 1959, ten years before the first Moon landing, and its pilots later included a young Neil Armstrong (he was 30 at the time). It took 44 years before anything like the X-15 reappeared: in 2004 the privately-funded spaceplane SpaceShip One reached 100 kilometers (32,800 feet), but did not attain the top speed reached by the X-15, which is still today the fastest ever crewed spaceplane. 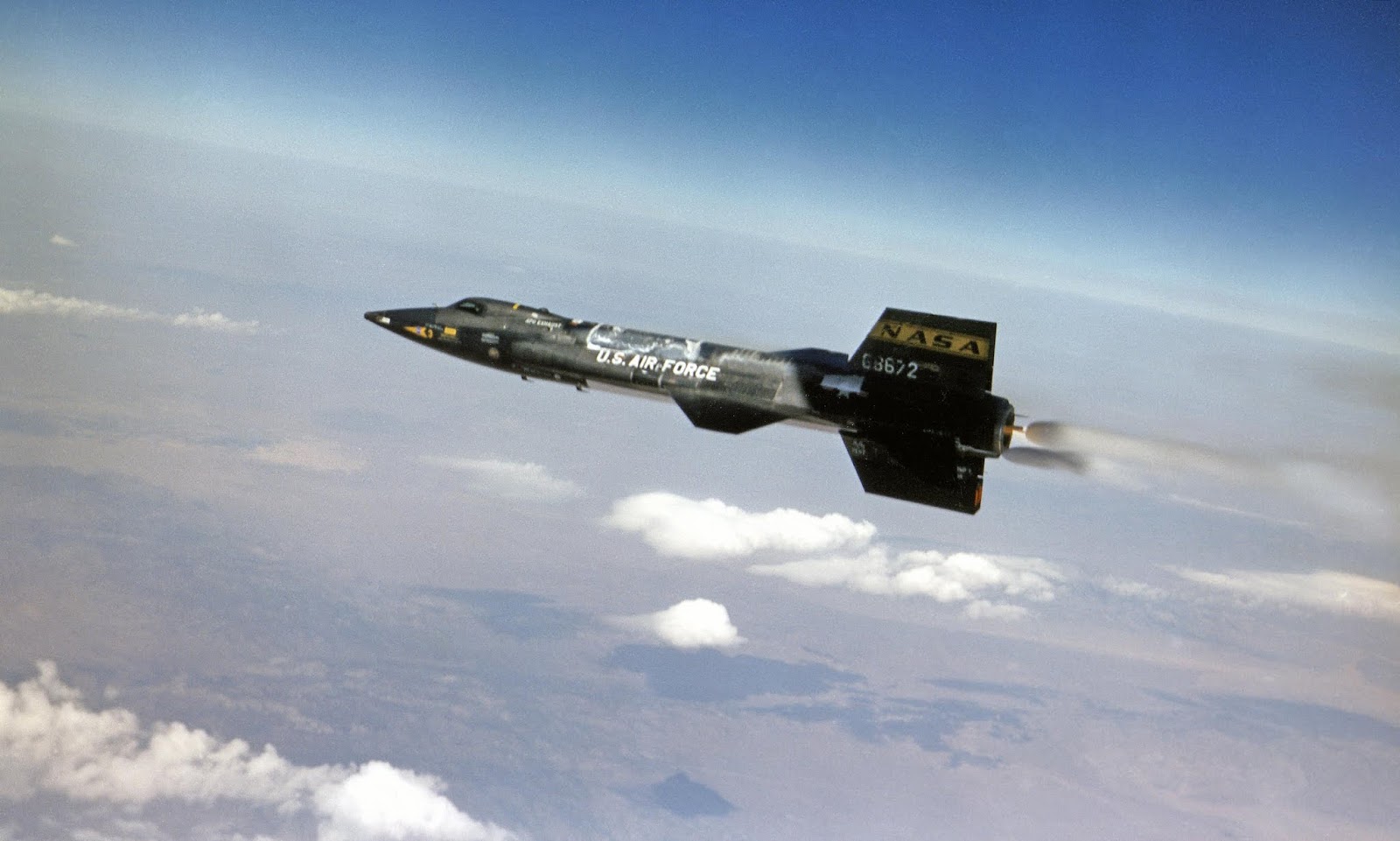 Figure 7.1-5. An X-15 shortly after being released from the aircraft that carried it up to its initial altitude. 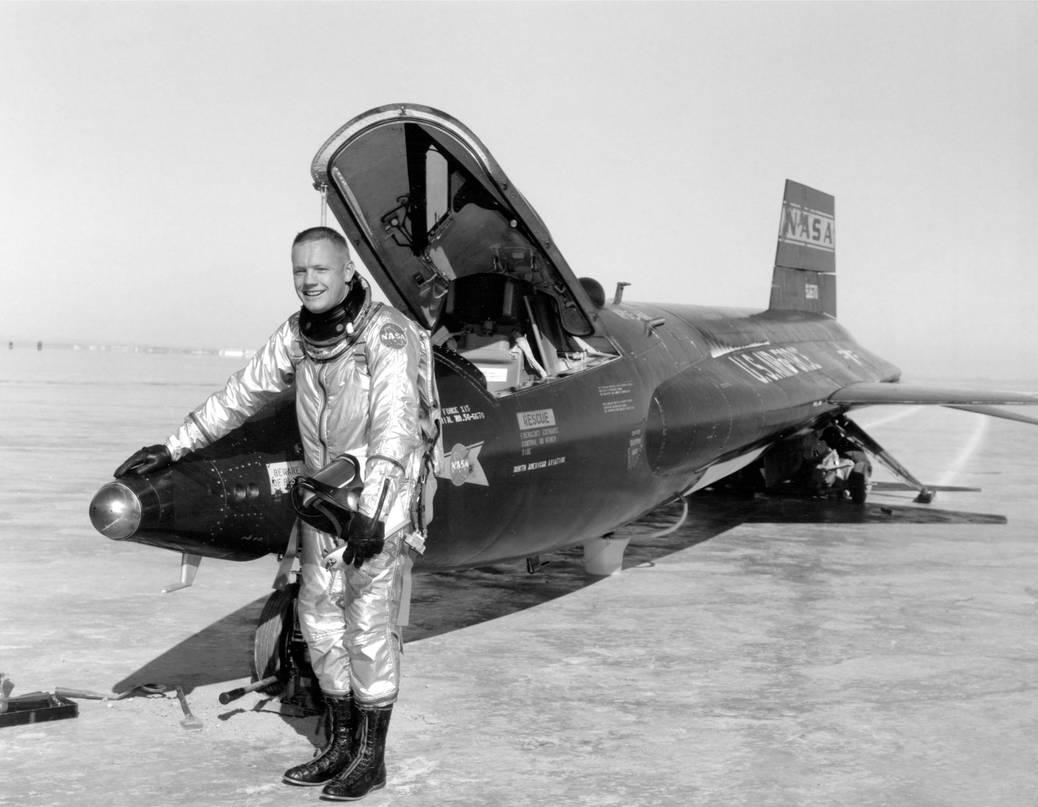 NEXT: 7.2 How come the Russians didn’t even try? Did they know it was impossible?