IN A NUTSHELL: No, it wasn’t. People who claim that the spacesuit was too wide to pass through the hatch are referring to the width of the suit when spread flat and with the arms at its sides, but the suit is much narrower when worn. Also, the moonwalkers crawled through the hatch on all fours and therefore with the arms tucked under their bodies, not at their sides. All this greatly reduced the actual suit width, allowing it to pass easily through the hatch. Besides, if the whole thing had been faked, it would have been trivial to fake a comfortably bigger LM hatch.


THE DETAILS: James Collier, author of the book and DVD Was It Only a Paper Moon?, reported that he went to the National Air and Space Museum in Washington and the Johnson Space Center in Houston, where he

video taped an actual LM. Here research indicated that the crew compartment and hatches were too small for the astronauts to actually enter and exit. After taking the video footage I challenged NASA to prove that two six-foot astronauts, in ballooned-out pressure suits (4-psi in a vacuum) could either get in or get out of a LM.

...the aperture of the LM is only 32 1/4 inches wide [...]. Surely, it would be very difficult for a pressurised, spacesuited astronaut, fully loaded with his PLSS and measuring over 31 inches in width to exit through such a small and awkward aperture.


The width of the LM hatch quoted by Bennett and Percy is essentially correct, as confirmed by NASA’s Apollo 11 Press Kit and Lunar Module Operations Handbook.

However, their measurement of the width of a suited astronaut is definitely wrong, because it refers to the spacesuit laid flat and with its sleeves at the sides of the flattened torso of the suit (as shown in the photograph on page 341 of Dark Moon). Any garment measured in this way will appear to be much wider than when it is being worn, because it’s not wrapped around the wearer’s body. Try this for yourself: your sweater, when spread flat, is much wider than your body. Basically, Bennett and Percy are confusing girth and width.

The PLSS backpack was approximately 51 centimeters (20 inches) wide and therefore posed no problems in terms of hatch width.

This mistake is compounded by the fact that the Apollo astronauts crawled out through the hatch on their hands and knees and therefore held their arms tucked in under their bodies, not at their sides as shown in Dark Moon. This reduces further the actual width of the spacesuited astronaut.

Besides, Apollo photographs such as AS11-40-5862 (Figure 8.16-1), which shows Buzz Aldrin as he exits the lunar module through the hatch, clearly demonstrate that the hatch was wide enough. Astronauts reported that exit certainly wasn’t easy, but it was feasible. 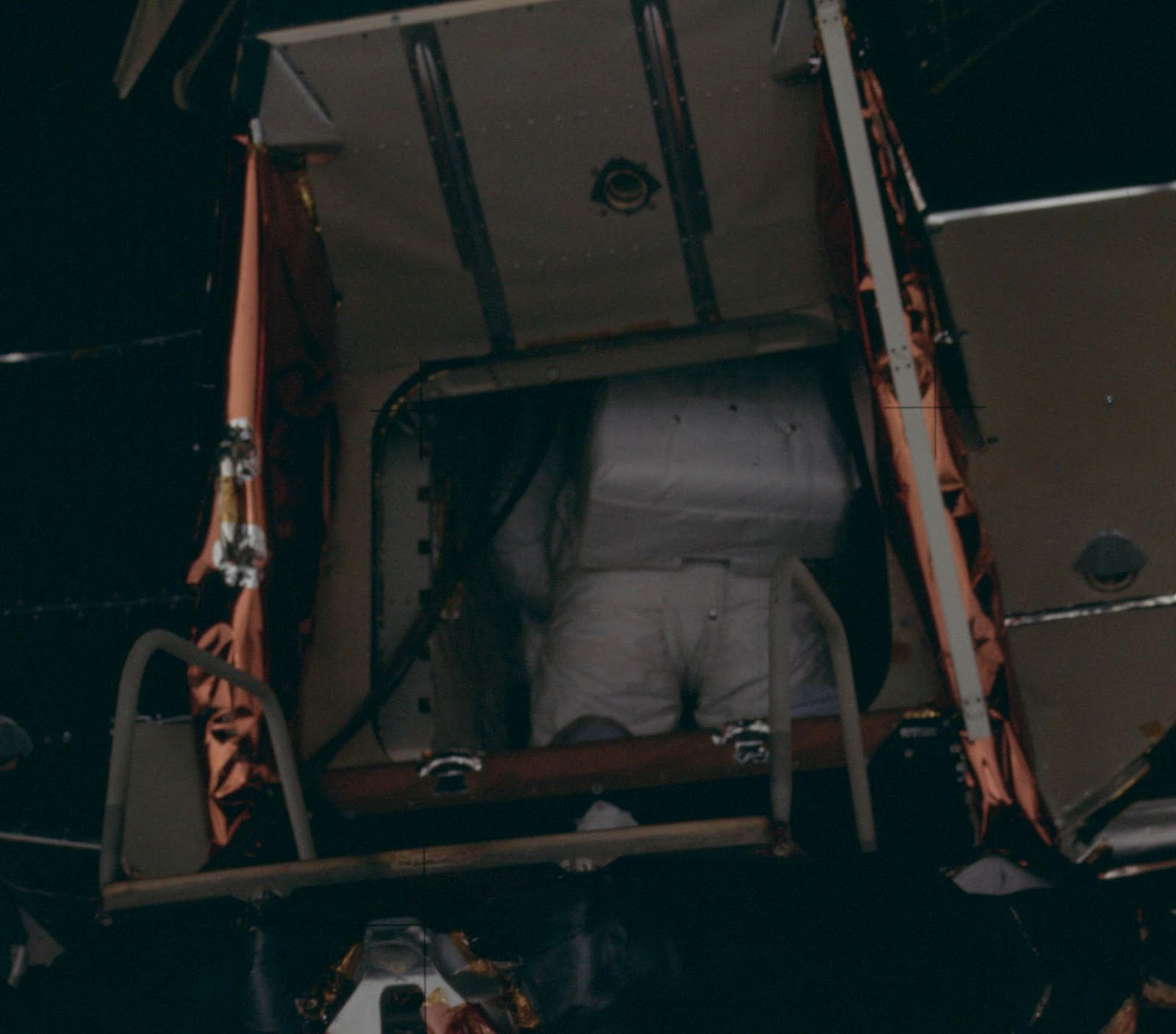 
There’s a very simple way to check all this. The hatch width reported by Bennett and Percy, 32 1/4 inches (82 centimeters), is the width of an average interior house door. The widest part of a suited astronaut’s body is at the shoulders, so try standing in a doorway and notice how much clearance you have on either side. Even if you take into account a bulky Apollo spacesuit, there’s still room enough to walk through easily.

If you really want to be thorough, buy or rent a replica Apollo spacesuit (available from specialist dealers), put it on and compare its actual width with the hatch of an original LM, such as the ones on display at the National Air and Space Museum in Washington, DC, at the Kennedy Space Center in Florida or at the Johnson Space Center in Houston, Texas.

While it may seem impossible to access priceless museum artifacts like the Lunar Modules to measure them, today’s technology actually allows this without even getting too close. A 2018 article on Metabunk.org describes how the LM on display at the Kennedy Space Center, which is an unflown original vehicle, was measured remotely using a home-made portable LIDAR scanner. The same technique was then used on an Apollo spacesuit worn by a manikin and displayed at the KSC. This method allowed not only to measure the various widths but also to create a digital model of the interaction between the suit and the LM. The result is that the suit fits through the hatch. All the data are publicly available.


Figure 8.16-2. LIDAR acquisition of the dimensions of the hatch and of the spacesuit.


The Metabunk article notes that some conspiracy theorists even claim that the astronaut manikins placed next to the Lunar Module at the Smithsonian are smaller than real people to hide the fact that the hatch is (allegedly) too small.

There’s another logical rebuttal to any claim of an impossibly narrow hatch or cramped LM interior: if the whole Apollo project was faked, there would have been no point in skimping on the size of the spacecraft. Why not simply fake a slightly bigger LM with a wider hatch and avoid any questions about hatch size?

NEXT: 8.17 How come the pressurized spacesuits don’t look like they’re inflated?