6.14 Why does the Moon look the same in two different places? Recycled Moon sets?

IN A NUTSHELL: Because they’re not two different places. A NASA documentary incorrectly edits two video clips of Apollo 16’s lunar excursion as if they were shot in different places on different days, but in the original raw footage the two clips are only seven minutes apart and belong to a long, unbroken sequence that occurs in a single location.


THE DETAILS: Bart Sibrel’s video The Rocks Cry Out: Apollo 16 Anomaly and the Fox TV show Did We Land on the Moon? accuse NASA of using the same location or movie set for two different sites of the Apollo 16 mission, which according to other NASA documents were located four kilometers (over 2.5 miles) apart and were visited on two different days (Figures 6.14-1 and 6.14-2). 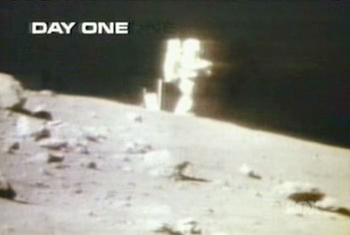 Figure 6.14-1. A frame of the first clip disputed by Fox TV and Sibrel. 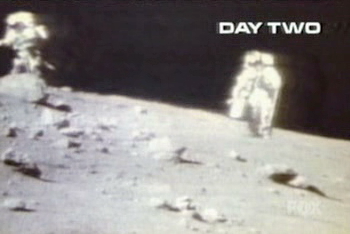 
The first clip (Figure 6.14-1) shows a single astronaut and is captioned “Day One” by Fox, while the second one (Figure 6.14-2) features two astronauts and is labeled “Day Two”, but the location is unquestionably the same. Even the camera angle is identical.

According to the Fox show, “NASA claims the second location was two and a half miles away, but when one video was superimposed over the other, the locations appear identical.”

However, reviewing the full set of TV transmissions from Apollo 16 (as published for example by Spacecraft Films) reveals another story. In the original transmissions, the images in the two video clips are not referred to two separate days: they’re just seven minutes apart and belong to a single, unbroken sequence recorded during Apollo 16’s second day on the Moon, at 144 hours and 48 minutes and 144 hours and 55 minutes in mission elapsed time. They also refer to the same location. In other words, the accusations of fakery are bogus.

Moreover, the audio in the clips presented by Fox TV and Sibrel doesn't match the recordings of reference. For example, according to NASA's Technical Air-to-Ground Voice Transcripts the phrase “Well, I couldn’t pick a better spot” in the first clip actually comes from the first day of Apollo 16 on the Moon, at 123 hours and 58 minutes, and the words “That is the most beautiful sight” and “It’s absolutely unreal!” occur at 124 hours and 3 minutes and 144 hours and 16 minutes respectively.

The most likely source of this mismatch is a documentary commissioned by NASA to A-V Corporation in 1972 and rather ironically entitled “Nothing So Hidden...”, in which the clips have the same, incorrect audio presented by Sibrel and Fox TV and are shown as if they had been taken on different days.

In other words, Sibrel and Fox referenced a documentary instead of referring to the original footage, which is the only valid reference material. Their entire allegation is based on this fundamental error.

The alleged evidence of conspiracy is just an editing mistake in a documentary produced by a non-NASA company. Editing mistakes in documentaries are not evidence of NASA fakery; they’re merely evidence of inaccurate editing. Unfortunately, such mistakes or artistic licenses are frequent in supposedly faithful documentaries and often alter the understanding of an event. For example, as space historian James Oberg notes about Apollo 11,

A far more serious distortion appears in most — but not all — television documentaries of the mission. Since the “small step” was really so small and his body movement so subtle, the video of this event is not dramatic enough for some programs. Instead, the audio track of the first words is transferred forward about a minute to coincide with Armstrong’s first jump down the ladder to the footpad. This turns the poetic “small step” into an awkward big hop. That may satisfy action-oriented entertainment values but it is false history. It is untrue to the significance of Armstrong’s words.*

NEXT: 6.15 Is this video found footage from the movie set where the Moon landings were faked?