5.13 Why do the visors show reflections of studio lights?

IN A NUTSHELL: They’re not studio lights. They’re reflections of sunlight on the scratches and smudges of the visors. This is made clear by looking at the high-resolution scans of the photographs. Similar reflections are seen in Shuttle and International Space Station images.


THE DETAILS: Some Apollo photos show an unusual row of bright dots on the astronauts’ helmet visors. Hoax theorists such as German author Gernot Geise have claimed that these are reflections from the rows of studio lights or from the windows of the control rooms used on the movie set where the Moon landing footage was faked. 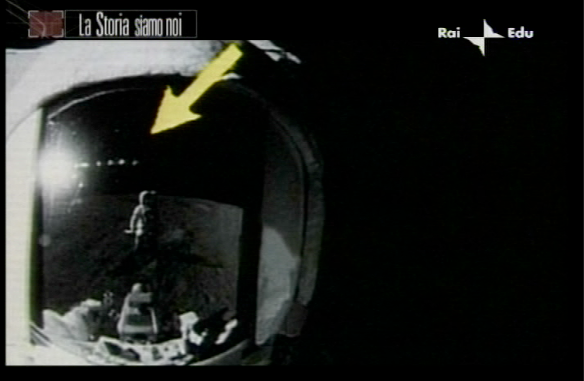 
As usual, conspiracy theorists fail to provide exact details and sources. It takes patient research to find out that the allegedly fake photo is a detail of an Apollo 12 picture, AS12-49-7281, taken by Charles “Pete” Conrad during the second moonwalk of that mission. The astronaut in the picture is Alan Bean; Conrad’s reflection can be seen in his visor. 
If you examine a high-resolution scan of the original photograph, it turns out that the alleged studio lights or windows are neither shaped nor arranged like studio lights or windows. The low-quality version shown by hoax proponents makes them appear to be evenly spaced circular dots, but in actual fact their shape and spacing are very irregular. 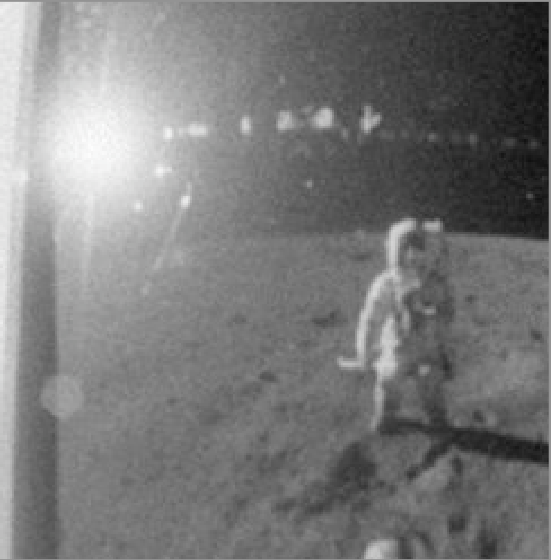 
The explanation of this apparent anomaly is now quite obvious: these are reflections of sunlight on some of the scratches and smudges of the visor.

These blemishes were produced mainly by the astronaut’s dusty gloves when they bumped against the reflective visor to lift or lower it or to move their sliding lateral eyeshades, which can be seen pulled down in AS12-49-7281 to the sides of the visor. Lunar dust is highly abrasive because it is not smoothed by wind or water as occurs on Earth: it acts like a sort of natural sandpaper. Apollo mission reports often mention scratches and clogging caused by moondust.

Similar lines of reflected sunlight can also be seen to the side of the Sun’s main reflection in pictures of the Apollo spacesuits taken on Earth during training, such as the one shown below. It seems unlikely that there was any need to place a row of spotlights in the sky for this picture.

Figure 5.13-4. Sunlight reflecting off an Apollo suit visor produces a linear streak during training on Earth. Frame taken from the documentary When We Left Earth.


More recent photographs taken during spacewalks from the US Space Shuttle and the International Space Station, too, show scratched visors: scuffing occurs even in the relatively pristine environment of space. An example is this photo, taken during Italian astronaut Luca Parmitano’s ISS spacewalk in July 2013. 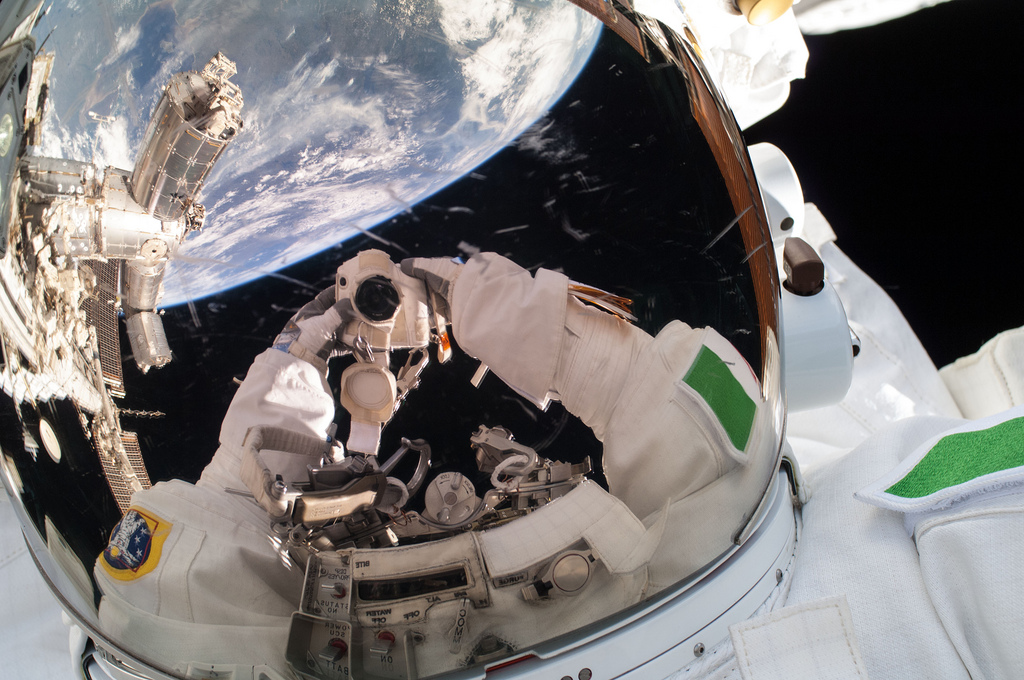 
Another example is provided by Shuttle mission STS-118, in August 2007 (photo ISS015-E-22561). In particular, in the top left region there is a triangular smudge that closely resembles the alleged “studio lights” claimed by conspiracy theorists. 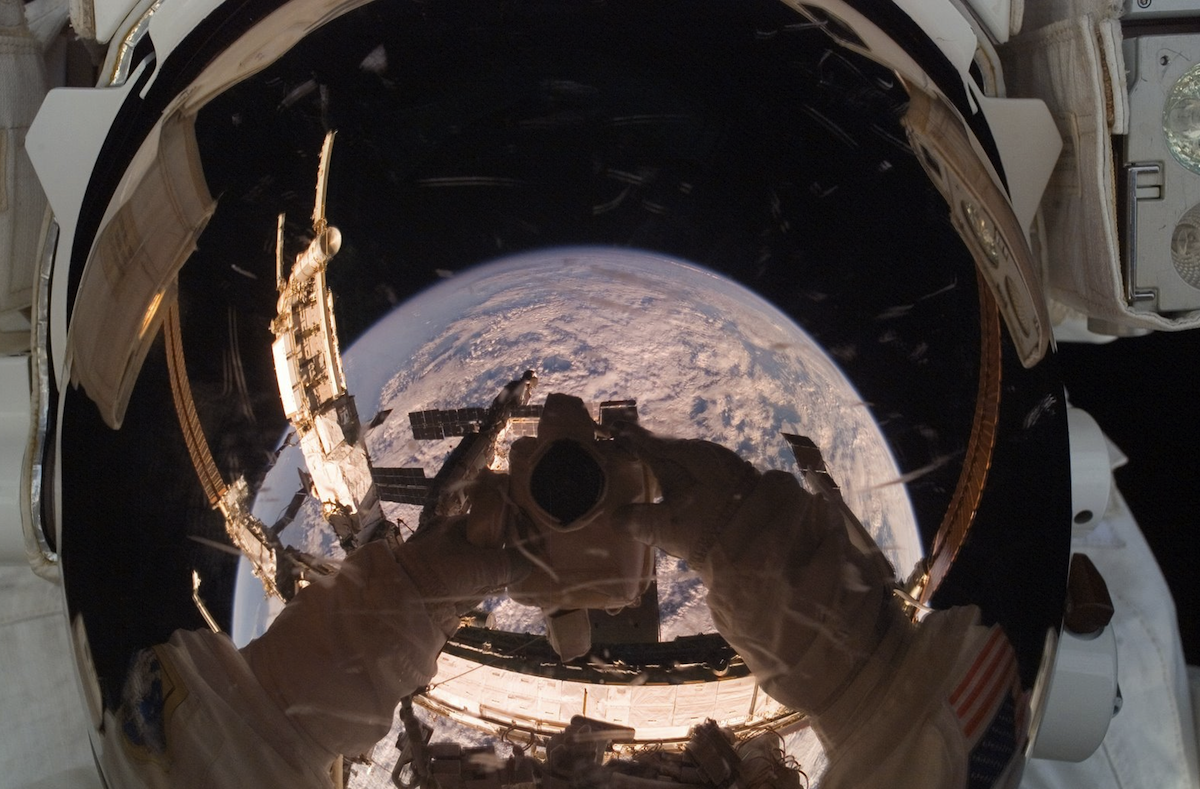 Figure 5.13-6. Scratches and scuffs on the visor of astronaut Clay Anderson as he works outside the International Space Station (2007). Photo ISS015-E-22561.


One should also take into account the fact that the Apollo helmet used for moonwalks and spacewalks consisted of an inner bubble helmet, a transparent central visor and an outer gold-coated visor. Light striking the outer visor would be reflected back and forth between the three layers, easily forming repeating patterns of light spots.

NEXT: 5.14 How can the camera crosshairs be behind objects?