5.11 How can all the photographs be so perfect?

IN A NUTSHELL: They’re not. There are many bad pictures, but unsurprisingly NASA and the press usually prefer to show just the best ones.


THE DETAILS: Mitch Pileggi, as host of the Fox TV show Did We Land on the Moon?, asks dramatically: “If the cameras were so difficult to manipulate, how were thousands of photos taken with crystal clarity, precise framing?” Then Bill Kaysing piles on the disbelief: “The pictures that we see, that allegedly were taken on the Moon, are absolutely perfect!”

It’s a fairly reasonable question, considering that nobody had ever taken photographs on the Moon before, the cameras had fully manual exposure and focus, didn’t have a viewfinder to aim them precisely and in any case could not be placed in front of an astronaut’s eye to point them because of the spacesuit helmet.

The answer is that it’s not true that all the Apollo photographs offer “crystal clarity, precise framing”: NASA, and consequently the press, simply published the ones that turned out well; the others were disregarded, as is standard practice in any photo report. Indeed, if we examine the full set of Moon pictures, we find dozens of underexposed, overexposed, blurred, out-of-focus, fogged and badly framed photographs, which are hardly ever shown precisely because they’re so bad. 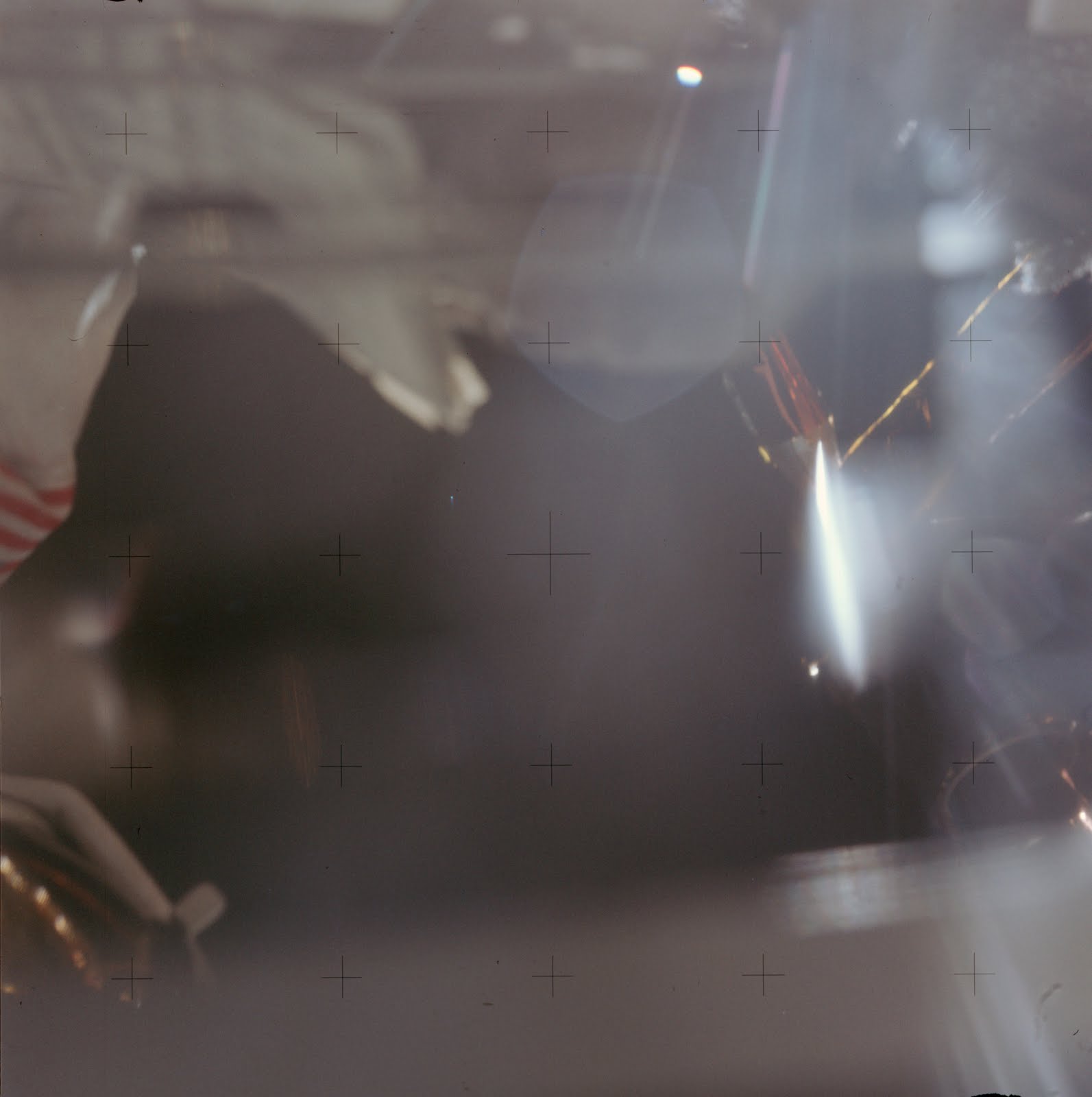 Figure 5.11-1. Photograph AS12-47-7009 (Apollo 12). A spacesuit helmet is recognizable in the bottom left corner of this probably unintentional shutter release. 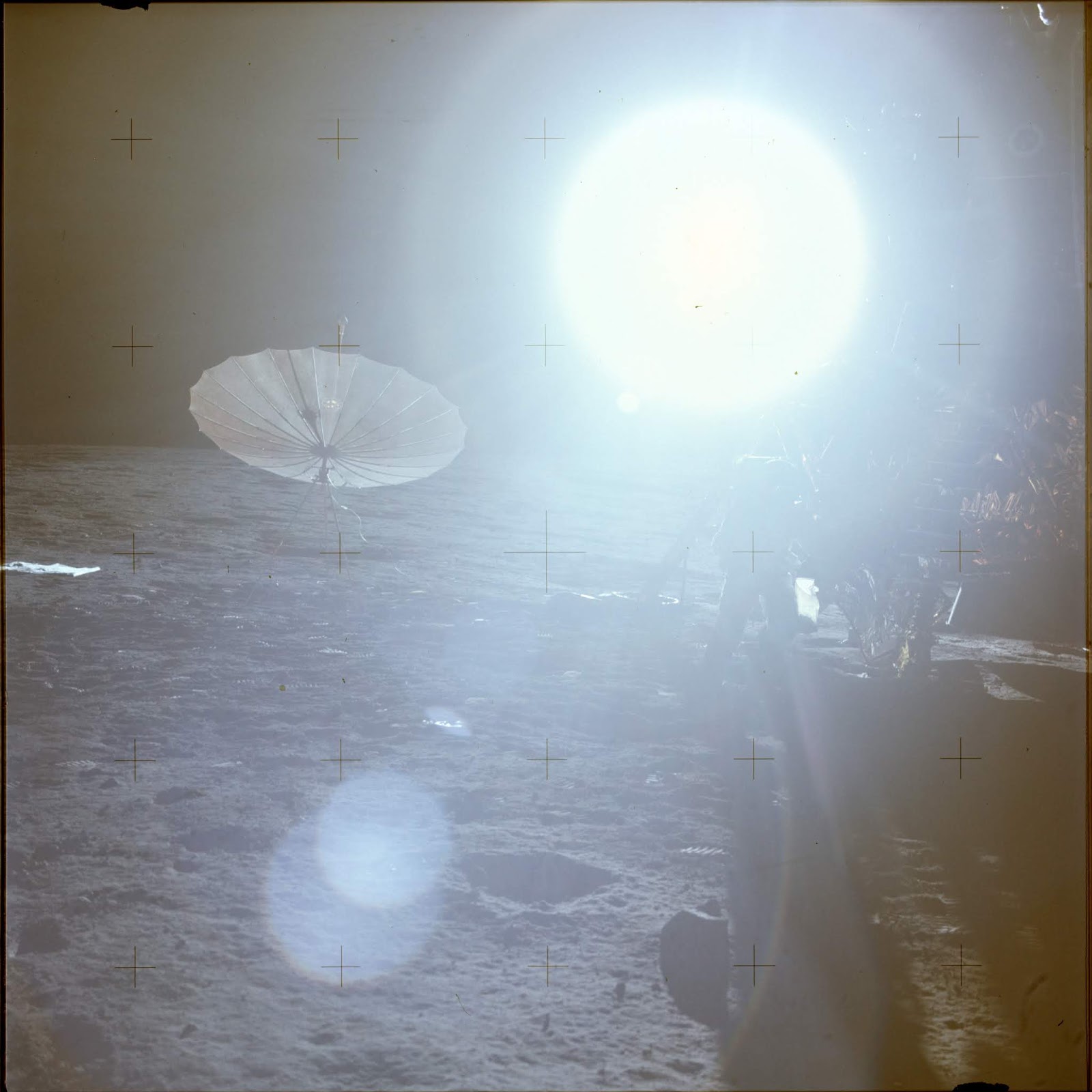 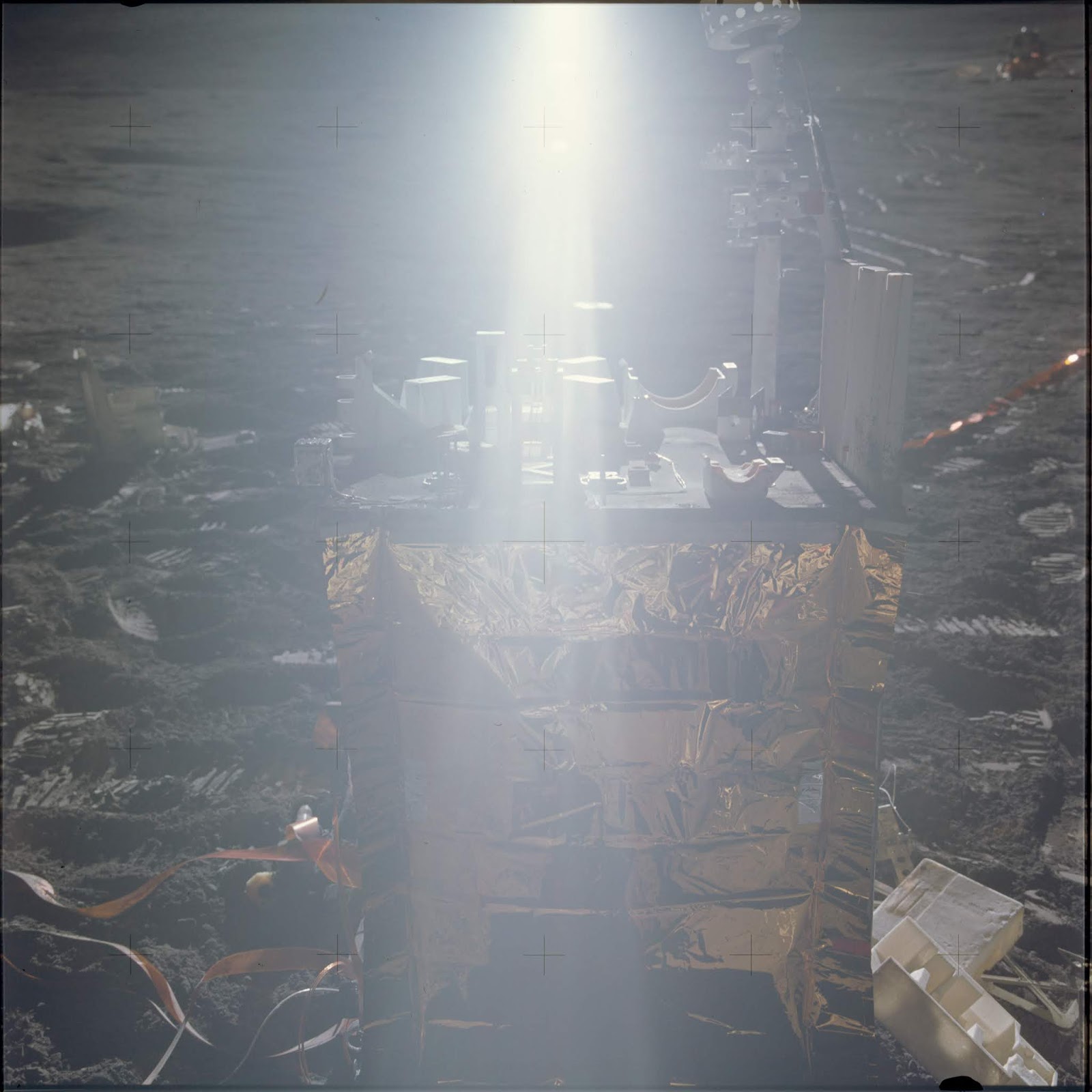 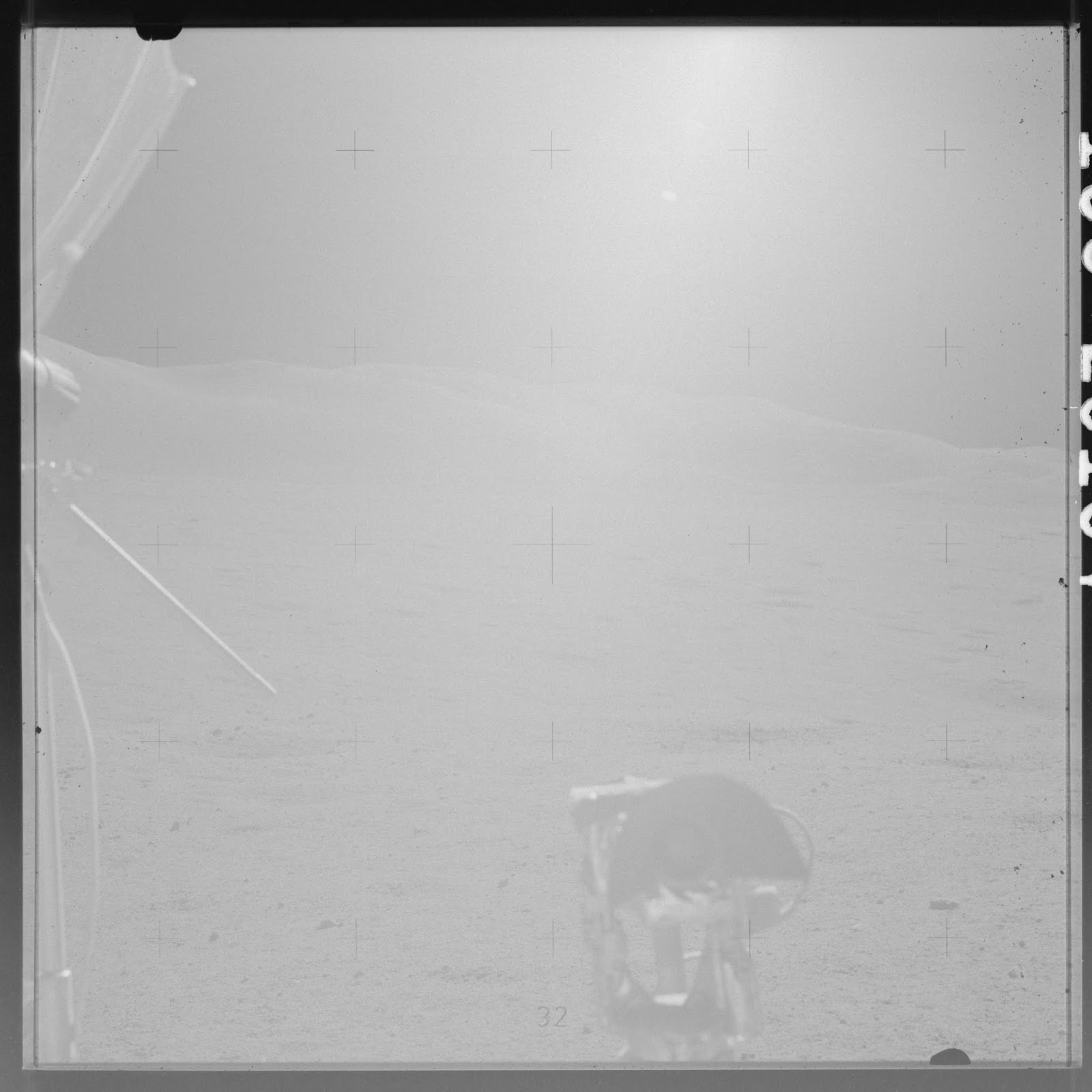 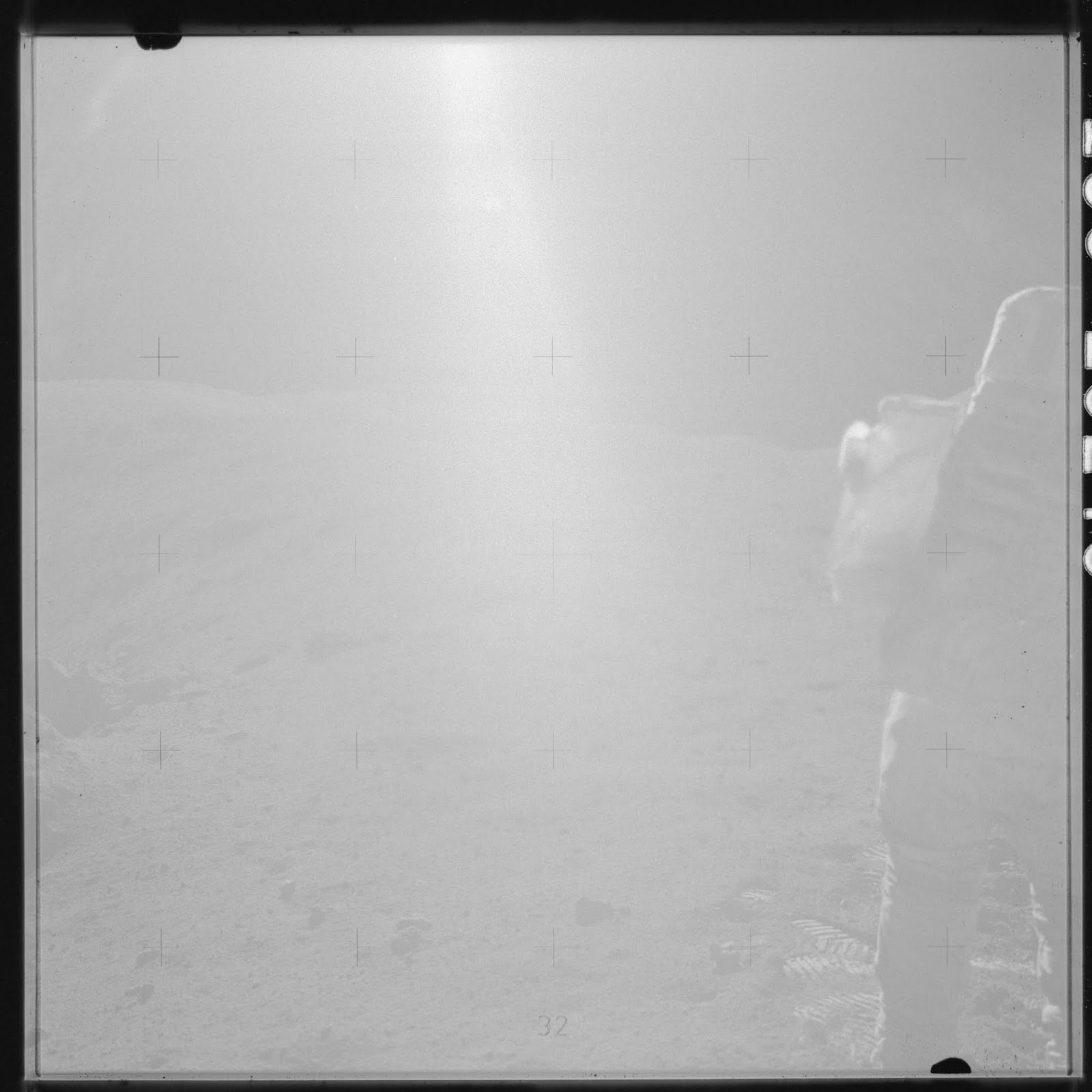 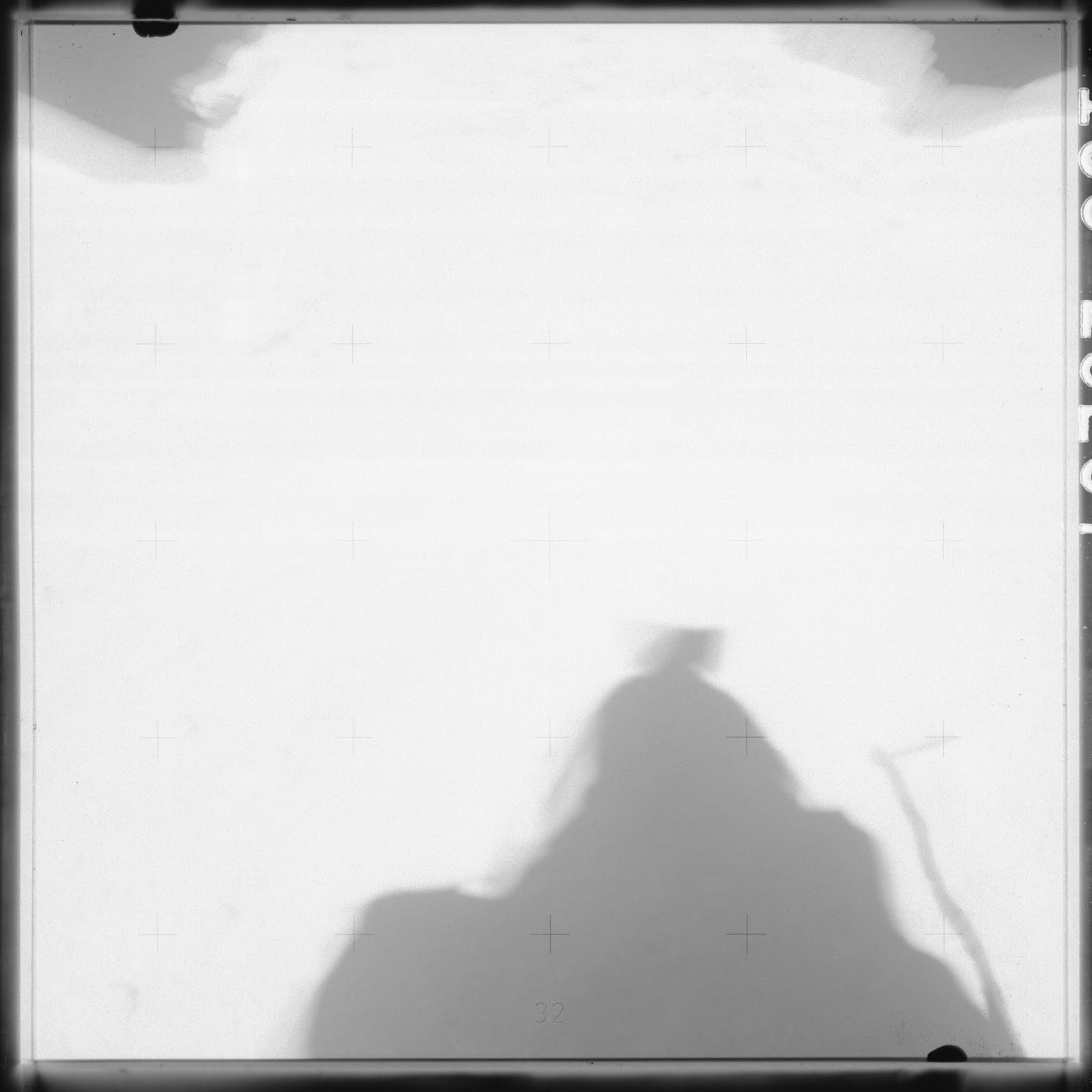 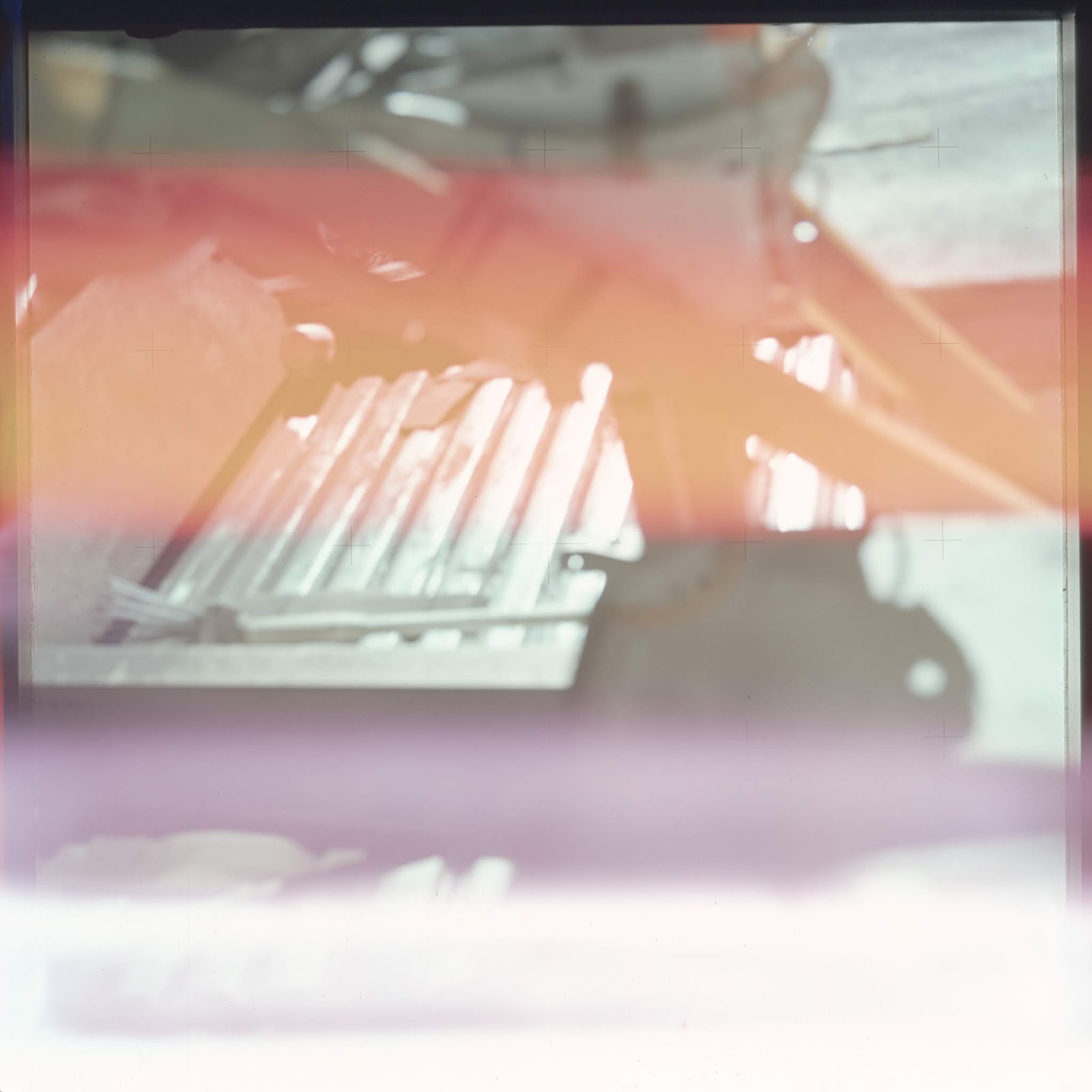 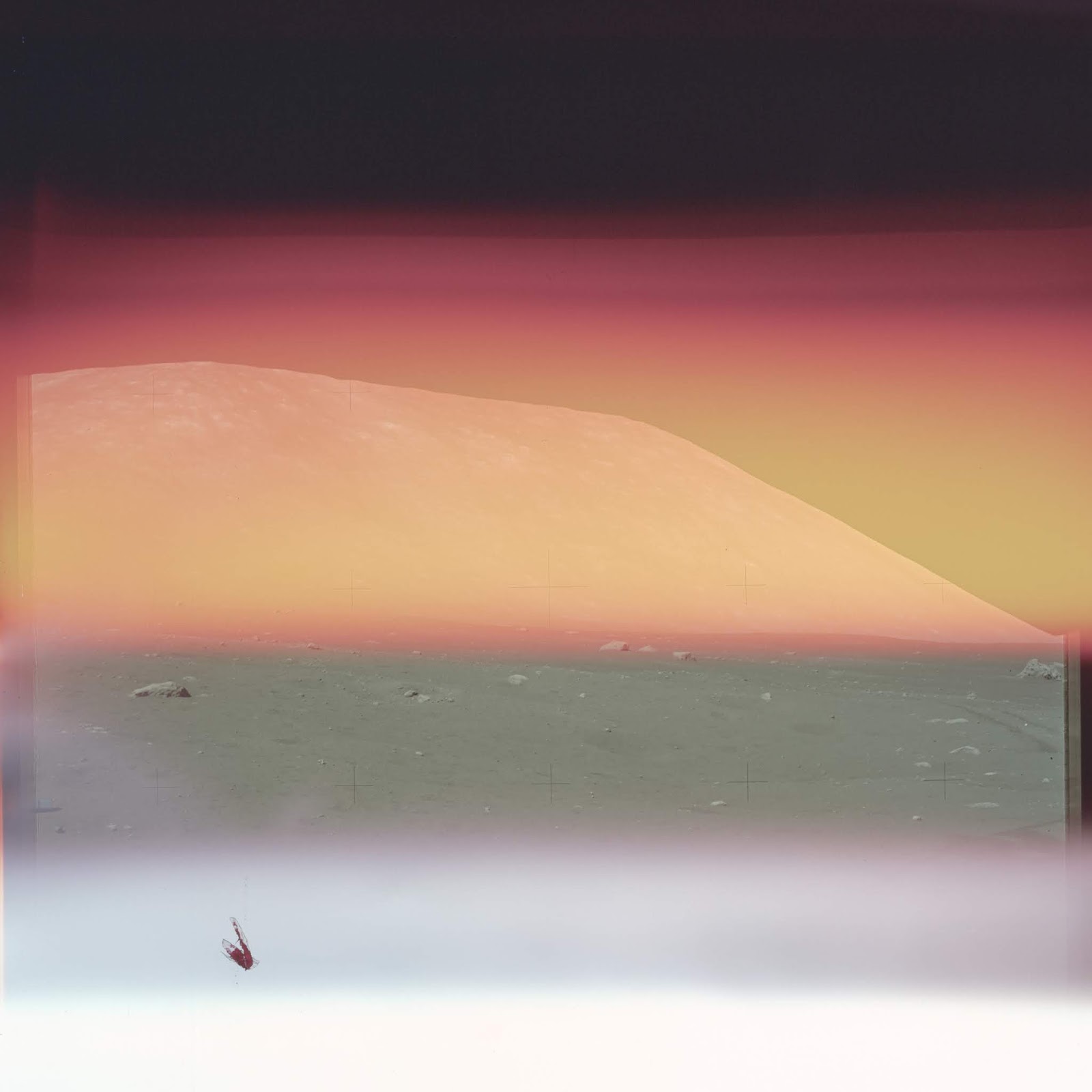 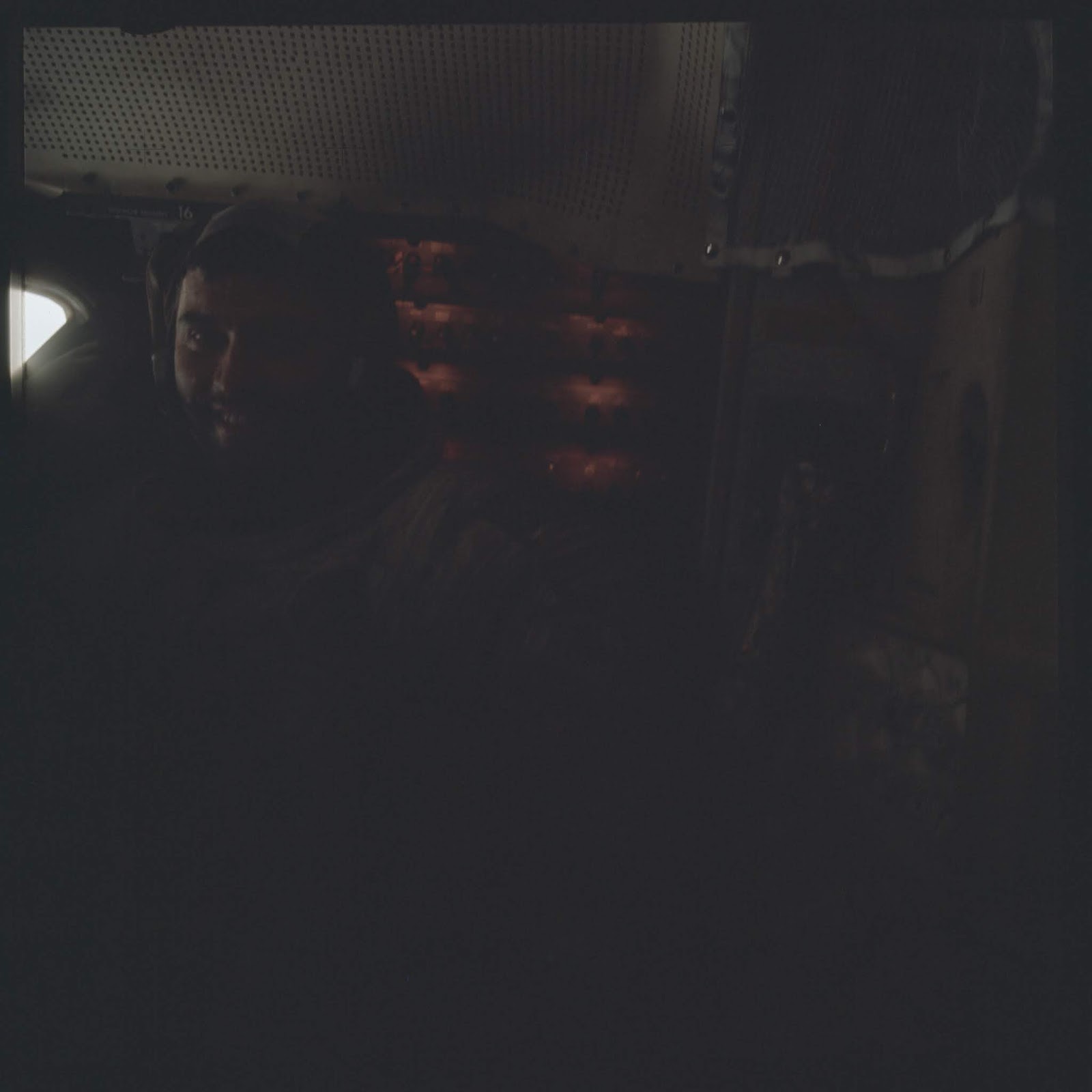 
The complete sets of the Apollo photographs can be examined in very high resolution for example at the Lunar and Planetary Institute website or at Asu.edu and include many more examples of photographic mishaps.

Even Neil Armstrong’s world-famous portrait of Buzz Aldrin was almost a fiasco: careful inspection of the original shot (Figure 5.11-10) reveals that Armstrong almost cropped Aldrin’s head (indeed, Aldrin’s radio antenna is missing and the top of his backpack is out of the frame) and tilted the camera so much that a piece of fake sky is often added to this photograph in order to straighten it and make it look better. 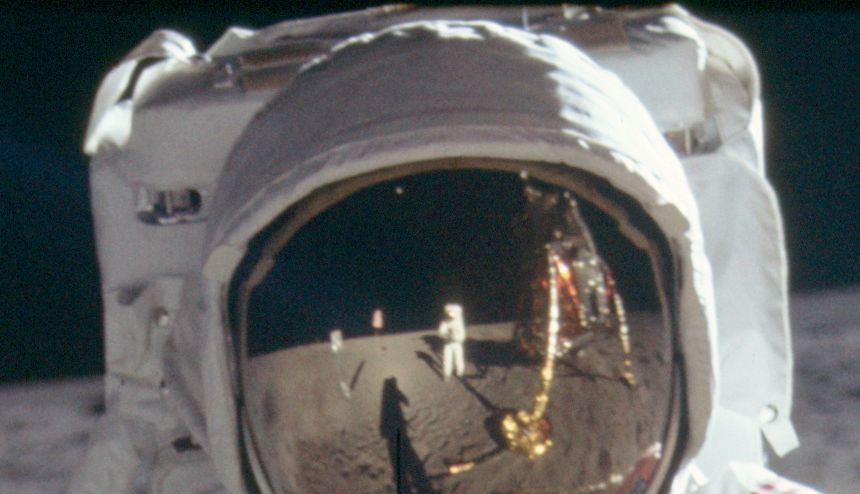 
So much for “absolutely perfect”. When photographs could be disseminated only through the press, nobody wasted space and money by publishing the bad shots. That’s why many people got the impression of absolute perfection. Today, however, the complete photographic record can be shared at no cost on the Internet and therefore all the images are now available for viewing.

Some of these photographic blunders are heartbreaking from a historical point of view. For example, consider NASA photograph AS11-40-5894 (Figure 5.11-11), taken during the Apollo 11 mission and shown below. It’s a greatly underexposed picture of the LM. In the bottom left corner there’s a barely recognizable silhouette of an astronaut. Analysis of the mission timeline allows to identify him: had it been exposed correctly, it would be the only frontal portrait of Neil Armstrong on the Moon. 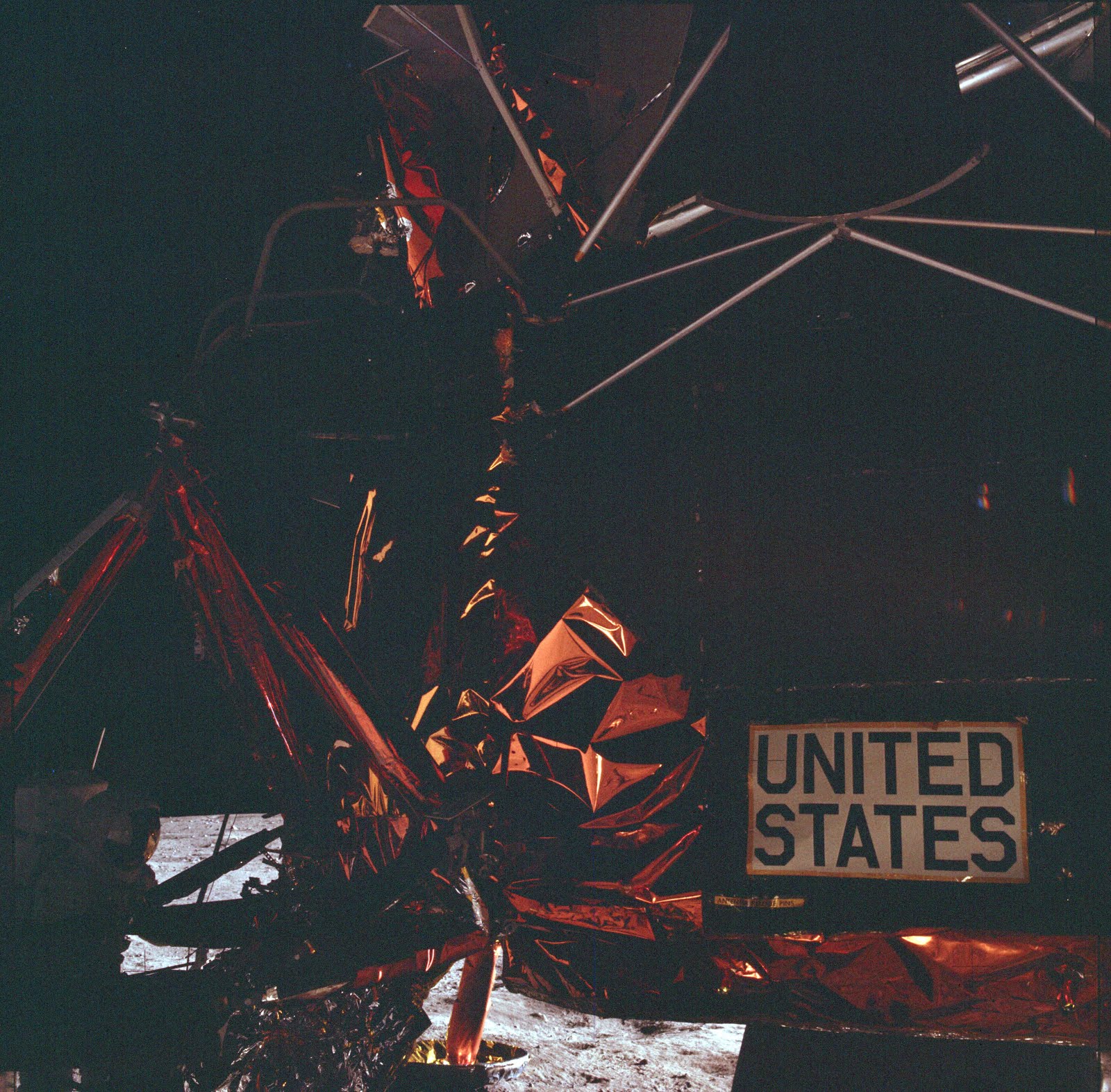 
Digital processing allows to recover some of the lost detail, as shown in the inset below, suggesting that Armstrong’s gold reflective visor was raised and therefore his face would have been visible. This photo would be a wonderful portrait of the first human being to set foot on the Moon. 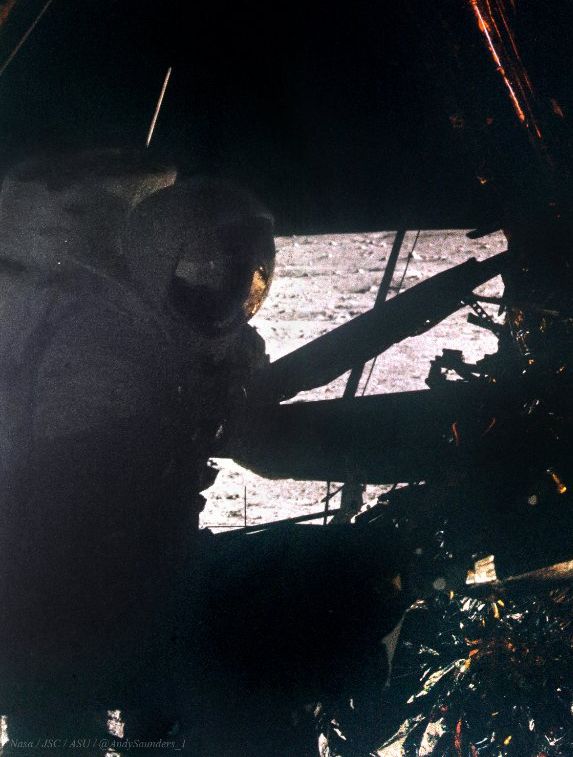 
Anyone who wishes to try to recover this image can use the original film scan in TIFF format (189 MB) available on Asu.edu.

Despite these mistakes, the astronauts managed to bring back a good number of correct shots. How could they achieve this result on the first attempt? First of all, theirs were not the first photographs taken on the lunar surface: automatic probes had already sent back pictures of their landing sites. Therefore the lighting conditions of the Moon were known in advance and correct exposure settings were computed before leaving Earth. On the Moon, moreover, there were no clouds or haze that could alter the lighting.

The astronauts had also been trained for photography and were accustomed to composing their pictures simply by sighting along the camera’s longitudinal axis, without using a viewfinder. Their cameras almost always had wide-angle lenses that had a broad viewing field and therefore didn’t require very precise aiming.

The bright daylight also reduced focus problems by allowing to close the diaphragm of the camera, producing a great depth of field (range of distances that are in focus), which reduced the need for exact focusing of every photograph.

NEXT: 5.12 How come there are photos of the landing site without the Lunar Module?