There are many Moon hoax claims, leading to multiple alternative explanations of what allegedly actually happened. As is often the case in the bizarre world of conspiracy theories regarding many events, for the Moon landings there is a single “official” version, which is self-consistent, extensively documented and widely accepted by the experts, and there are many alternative versions of the hoax scenario, which contradict each other.

Accordingly, it can be highly instructive, and sometimes entertaining, to avoid the usual debate between “believers” and “skeptics” and instead arrange a confrontation among Moon hoax proponents that support different and mutually incompatible versions of the way the events were faked.

Knowing these various aspects of Moon hoax theories is important, because it highlights their inconsistencies and shows that many conspiracy theorists and doubters haven’t really thought through the consequences and implications of their pet arguments and therefore end up making self-contradictory statements, as detailed in the chapters that follow.


We never went. Ever

Supporters of this theory allege that NASA lacked the technology for a Moon landing and that even today the radiation of the Van Allen belts that surround the Earth is a lethal barrier to any crew venturing away from our planet.

Accordingly, they argue that all crewed flights to the Moon, including Apollo 8, 10 and 13, which orbited around the Moon without landing, had to be faked.

Therefore, they claim, all the photographs and film footage, the radio and TV broadcasts and the telemetry from the lunar surface and from lunar orbit had to be faked by using special effects. Likewise, the lunar rocks and all the science brought back from the Moon had to be fabricated or acquired through other means. 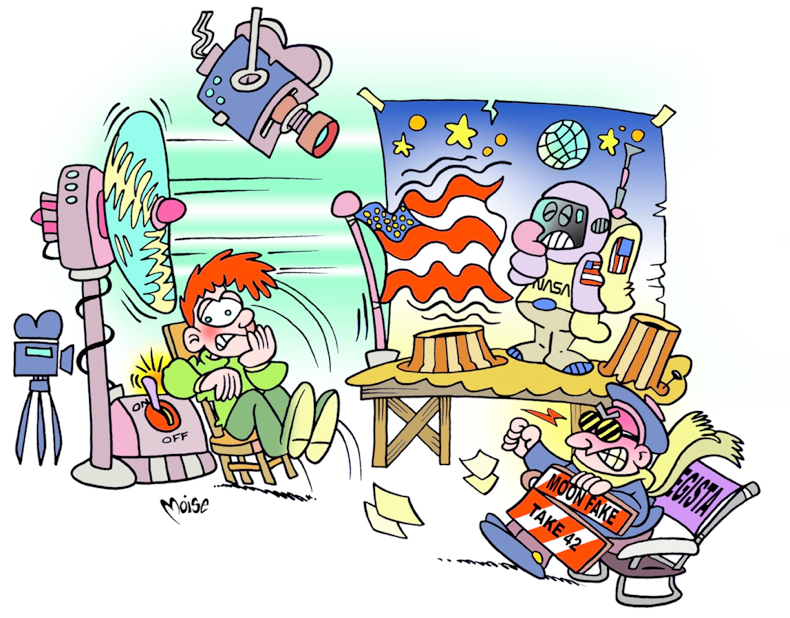 
This scenario implies the need to fake every detail of nine complete lunar missions: six Moon landings and three flights around the Moon.

Supporters of this theory allege that NASA failed in this immensely complicated simulation of so many missions and that the skeptical eye of hoax theorists was sharper than the experts’ vision in spotting mistakes and anomalies in the pictures and in noting scientific impossibilities.


We went, but the first landing was faked

Some conspiracy theorists argue that only the first Moon landing (Apollo 11) was faked because the vehicles were not ready or were untested, but all the previous and subsequent missions were real. 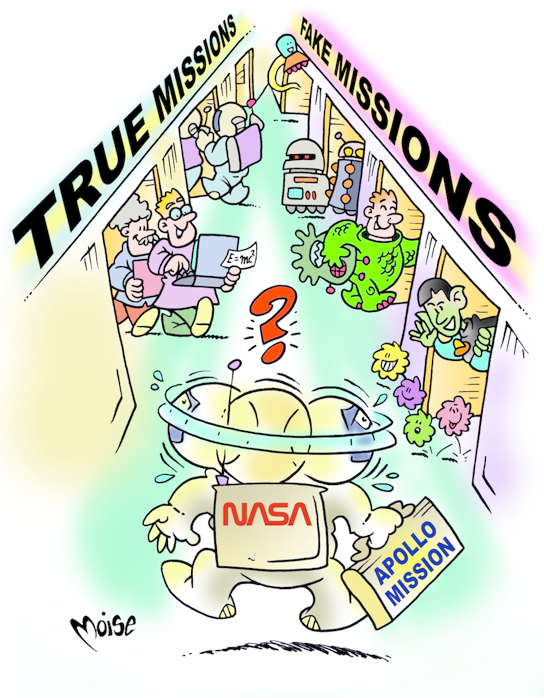 
This theory seeks to explain, for example, the difference in quality between the grainy, black-and-white television footage of the first landing and the sharper color images of the subsequent Moon missions.

It also appears to justify the difference in quality and quantity between the photographs taken by Apollo 11 and those taken by all the later missions, as well as the use of different spacesuits and the far longer duration of the moonwalks: the Apollo 11 astronauts made a single lunar excursion that lasted two and a half hours, yet Apollo 12 already had two moonwalks that lasted almost four hours each.

The fact that the Apollo 11 moonwalkers stayed very close to their landing spot, differently from all the other missions, is explained by the need to stay within the confines of the movie set.

The initial fakery, in other words, was meant to fool the Soviet Union into believing that it had lost the race to the Moon and gain time to go there for real later.


We went, but the photos were faked

Another school of thought claims that the Moon missions were all real but their photos were unusable and had to be faked. The films, it is argued, were fogged by cosmic radiation, melted by the excessive heat in the sun, or frozen by the extreme cold of lunar shadows, or the lighting on the Moon was so unearthly that the camera settings were wrong and the resulting photographs were unacceptable in terms of propaganda effectiveness. 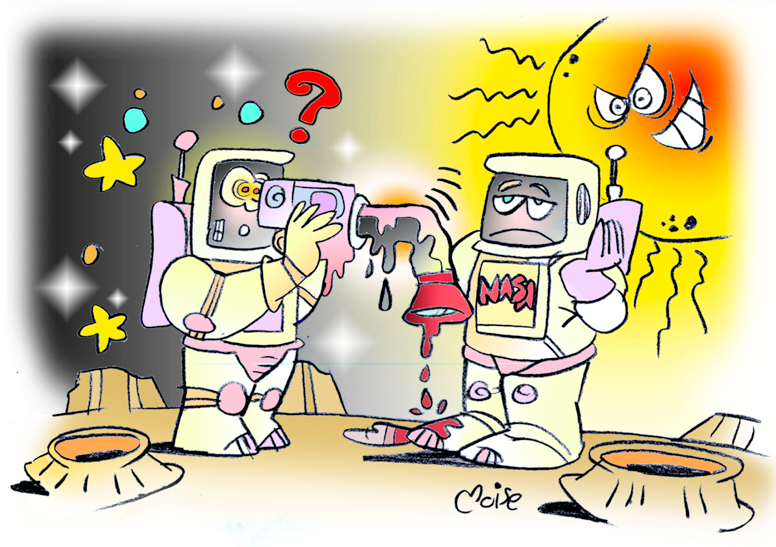 
A variation on this theory suggests that the real photos contained scientific information that the US did not want to share with rival countries and therefore a set of simulated pictures was prepared.


We went, but we found ET

The fourth main scenario of Moon hoax theories argues that perhaps not all the landings were real, but we did go to the Moon sooner or later, only to find that it was already occupied by extraterrestrials. 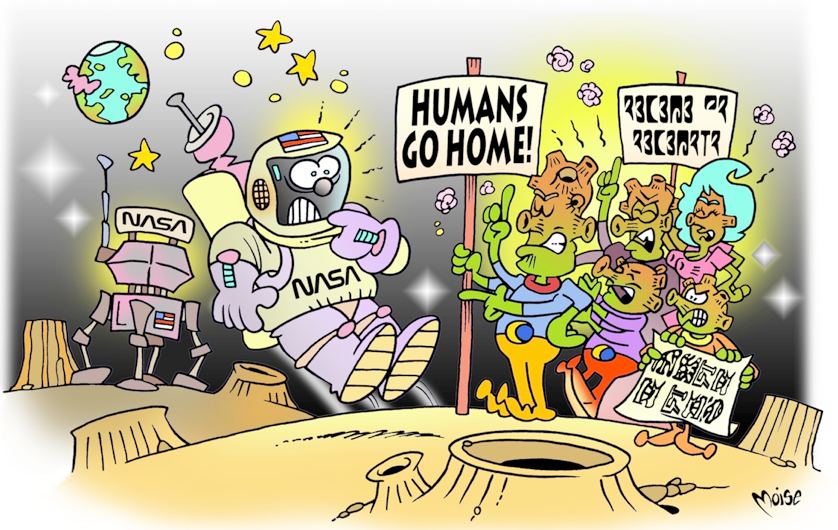 
Proponents of this theory say that some photos show UFOs in the lunar sky and that clandestine recordings document the astonishment of the astronauts as they discovered that they were not alone on the Moon.

Some claim that mankind has not returned to the Moon since those first landings because the aliens have told us to stay away. Others say that additional secret Moon missions were carried out to recover abandoned alien vehicles, from which NASA extracted the technologies for the Space Shuttle and for many other covert military projects.


That’s really what they say

Before you ask: no, these four main scenarios are not fabrications of the supporters of the “official” story, designed to ridicule Moon hoax proponents. Each one of these scenarios is documented in the books, videos and Internet sites of the various conspiracy theorists. There are even more ludicrous ones.

More importantly, the supporters of each one of these four main theories claim that they have incontrovertible evidence of their allegations, which contradict the other competing conspiracy scenarios. Standing aside and watching these people argue among themselves, therefore, can be extremely enlightening.

None of these people, however, has any experience or skill in the aerospace industry and there are no doubters or hoax proponents among today’s astronauts and employees of the various national space agencies, such as Russia’s Roscosmos, Europe’s ESA, India’s ISRO or Japan’s JAXA.

NEXT: 4.14 None of the experts have doubts