11.4 Did the astronauts find alien structures on the Moon?

IN A NUTSHELL: No. The footage that supports this claim is taken from a 1977 British parody documentary, Alternative 3.


THE DETAILS: One of the many UFO-centered tales regarding the Apollo missions alleges that Neil Armstrong and Buzz Aldrin, the two moonwalkers of Apollo 11, found alien artifacts on the Moon. Overwhelmed by their discovery, they started reporting it excitedly to Mission Control over the public radio link, while Mission Control tried to shut them up and told them to switch to a secure channel.

According to the proponents of this story, the radio transmissions from the Moon had a built-in delay designed to allow censorship and so the discovery was never made public. Allegedly, however, some radio enthusiasts managed to intercept the direct radio signal from the Moon and recorded it, and so the amazing extraterrestrial discovery was leaked.

Here’s the transcript of the astronauts’ excited exchange, which is also available as an audio file:

Astronaut 1: Hey, Houston, do you hear me? [garbled] we have here now.

Houston: We have it.

Astronaut 2: What is it? We have some explanation for that?

Houston: We have none, don’t worry, continue your program!

Astronaut 1: Oh boy it’s a, it’s, it, it is really something [garbled] fantastic here, you, you could never imagine this!

Astronaut 1: Well it’s kind of [garbled] ha, pretty spectacular... God... what is that there?

Astronaut 1: It’s [garbled], what the hell is that? 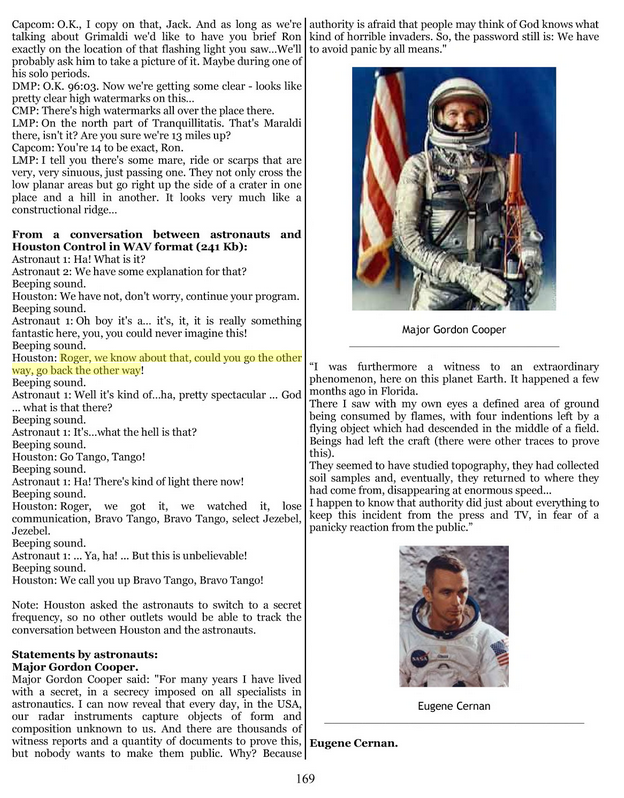 
However, the original source of the alleged recording is actually a 1977 British parody documentary, Alternative 3.


Even without knowing its source, there are rather obvious clues that the exchange is fake. First of all, the voices in the recording are completely different from Armstrong and Aldrin’s, as any comparison with their original voices will easily show.


Figure 11.4-3. Samples of Neil Armstrong’s voice during the Apollo 11 Moonwalk.

Figure 11.4-4. Samples of Buzz Aldrin’s voice during the Apollo 11 Moonwalk.


Moreover, the dialogue doesn’t follow standard protocol at all. In real Apollo mission recordings, every new communication begins with the name or callsign of the recipient followed by the name or callsign of the speaker. Astronauts  begin to talk to Mission Control by saying “Houston...” and then identifying themselves or their spacecraft, as in “Houston, Tranquility Base here. The Eagle has landed”. Mission Control always begins by saying the name of the astronaut or spacecraft being called and then identifies itself by saying “Houston”. This is a very formal procedure, ingrained by habit in the astronauts’ behavior. No such protocol is followed in the allegedly secret audio clip.

The beeps (formally known as Quindar tones) that separate the astronauts’ voices from the orders from Mission Control are different from the real ones, and so are the background noise and the type of distortion.

Also, there’s no sign of the 2.6-second delay between the voice from Mission Control and the replies of the astronauts that inevitably occurs due to the round trip to Earth-Moon distance, covered by the radio signal at the speed of light.

Another version of this exchange was published by an American-Canadian tabloid, the National Bulletin, on September 29, 1969, under the title Phony Transmission Failure Hides Apollo 11 Discovery... MOON IS A UFO BASE! It’s not clear whether this was an attempt at parody like Alternative 3, but it certainly has the same implausible setting and is replete with meaningless technobabble such as “orbit scanned” or “In 625 to the fifth, auto-relays set”, which might be impressive to the layperson but are dead giveaways for experts in the field.

The issue of the badly faked beeps is a good opportunity to dispel two frequently repeated myths about them: they could not be heard by the astronauts and they were not used to indicate that it was the other party’s turn to talk.

These beeps instead controlled the transmission of the radio signals from Earth via transmitters located in various countries, which were used as the Earth’s rotation brought them within line-of-sight reach of the spacecraft. They were linked to Mission Control in Houston, Texas, via analog telephone lines, which were affected by interference and noise, so it was necessary to mute the transmitter locally, at the transmission station, instead of closing the microphone in Houston.

Essentially, therefore, the Quindar tones were remote control signals sent over the telephone lines. This is similar to the “push to talk” function in walkie-talkies or ham radio equipment.

These signals are still used for some space communications. They take their name from Quindar Electronics, Inc.,which provided the equipment that generated these tones and responded to their commands. The tones are 250 milliseconds long at 2,525 Hz for the activation tone (transmission start) and 2,475 Hz for the deactivation tone (transmission stop).

A filter eliminated the tones from the signal sent to the Apollo spacecraft and therefore the astronauts usually didn’t hear them. However, during some flights, such as Apollo 8, the filtering didn’t always work fully and the piercing beeps reached the astronaut’s ears.

NEXT: 11.5 What about astronaut Ed Mitchell’s UFO claims?