IN A NUTSHELL: No. They would have been spotted by any amateur astronomer.


THE DETAILS: A popular twist on the Apollo fakery claims is the idea, championed for example by Bart Sibrel, that the Apollo astronauts did indeed go to space on their Saturn V rockets and returned with the splashdowns that the world watched on TV, but didn’t go all the way to the Moon: they hid in Earth orbit.

In this way, it is argued, they didn’t have to cope with the allegedly lethal radiation of the Van Allen belts and they were able to shoot the TV and film footage in which they are seen to be weightless inside the spacecraft. This solved the problem of simulating weightlessness, and only the footage on the Moon would have to be faked, greatly reducing the workload and the number of participants involved in the hoax. The spacecraft would actually be fully functional and would actually fly, and only a small group of people would need to know the actual flight plan.

The liftoff would be real, and so would the reentry, and the astronauts would actually be in space, where nobody could bump into them by mistake and where they would be subjected to the physiological effects of weightlessness. 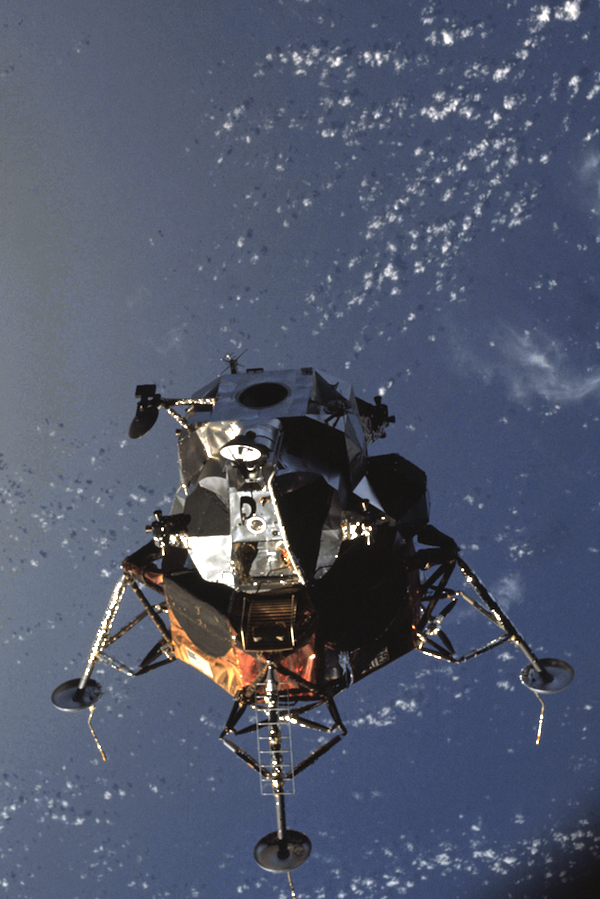 
Conspiracy theorists make it sound easy, but this scenario clashes with the basic fact that the lunar TV and film footage of the Apollo missions was nevertheless impossible to fake with 1960s-era movie effects.

There’s also the problem that the astronauts’ radio and TV transmissions would arrive from Earth orbit instead of from deep space, and this would entail a very conspicuous difference in the aiming of any radio antenna that received these signals all over the world (in California, Australia and Spain).

A full orbit around the Earth below the Van Allen belts lasts no more than a couple of hours and therefore the antennas would have to swing rapidly to chase the astronauts’ spacecraft as it moved across the sky, whereas real lunar transmissions would instead require them to stay trained on the Moon, following it in its slow crossing of the sky.

Any wrong aiming would be obvious not only to local technicians but also to anyone nearby, who would wonder why the giant dish-like antennas were not pointed at the Moon.

Moreover, the Soviets, who were competing with the United States for the prestige of the first Moon landing, would have been able to detect the fakery by using their own radio telescopes.


There’s another objection that renders the Earth-parking scenario visibly absurd: the Apollo spacecraft would have been observable from the ground by any amateur astronomer. Even small telecommunications satellites can be spotted because they reflect sunlight and therefore stand out as bright moving specks against the dark sky after sunset or before dawn. A vehicle of the size of Apollo (with or without the S-IVB stage) would have been very easy to spot, giving away the secret.

For example, the International Space Station, the Chinese space stations of the Tiangong series or the Russian Soyuz and American Dragon spacecraft, which orbit the Earth at much higher altitudes than those alleged for the Apollo spacecraft, are easily visible to the naked eye as rapidly moving bright points of light and can be photographed in detail with a good telescope (as demonstrated magnificently by Thierry Legault’s images at Astrophoto.fr) and their transit times and paths are easily available on the Internet or via dedicated apps.

The Apollo spacecraft, therefore, would have been easy to spot from the ground for the entire duration of their flight. They would have crossed the sky as bright dots in a few minutes, inevitably attracting the curiosity and attention of professional and amateur astronomers. A good telescope would have allowed to photograph them and identify their features.

Indeed, the Apollo flights were spotted in this way not only during their stay in Earth orbit but also during their journeys to the Moon and back by professional and amateur astronomers all over the world.

The photographs shown in Figure 10.4-2, for example, were taken by the Smithsonian observatory in Maui on December 21, 1968 and show Apollo 8, the first crewed mission to leave low Earth orbit and fly around the Moon, as it fires its engine to accelerate toward the Moon. The subsequent dumping of the residual fuel from the S-IVB stage was even visible to the naked eye and was documented by many amateur astronomers in the United Kingdom.


During the Apollo 13 crisis, the initial explosion released a cloud of oxygen that was documented visually from Earth. NASA, moreover, had to resort to help from the professional astronomers of the Chabot observatory in Oakland to determine the exact position of the crippled spacecraft so as to calculate the last firing of the lunar module engine, used as an emergency retrorocket, and bring back safely the three astronauts.*


Figure 10.4-3 shows, at the center, the Command Module, the Service Module and the Lunar Module of Apollo 13, over 23,000 kilometers (14,300 miles) from Earth, en route to the Moon, before the accident. The other four dots are the fairing panels that enclosed the Lunar Module and had been jettisoned.

The picture was taken on April 12, 1970 through the 60-centimeter (24-inch) telescope at Table Mountain, in California. The diagonal streaks are stars, distorted by the motion of the telescope to chase the spacecraft during the five minutes of the exposure of the film. The same observatory saw the Apollo 8 S-IVB stage and command and service module when they were nearly 320,000 kilometers (200,000 miles) from Earth.* 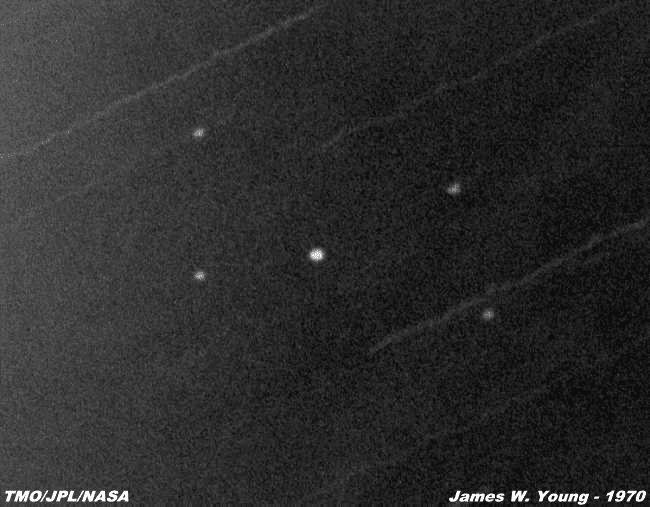 
It should be noted that the locations and events reported and recorded by amateur and professional astronomers correspond perfectly to the ones described in NASA’s technical documents for the individual missions.

NEXT: 10.5 Did the radio and TV signals come from space, but not from the Moon?