IN A NUTSHELL: No. He wouldn’t have had the time. And if he had, he would have done a better job.


THE DETAILS: The name of movie director Stanley Kubrick, author of 2001: A Space Odyssey, is often suggested as the faker of the Apollo footage.

However, his biography clearly shows* that his whereabouts at the time when he was supposed to be shooting the Apollo fakery were well-known. He was busy shooting 2001 from 1964 to 1968 and then focused on the preproduction of Napoleon, which was never completed because United Artists went broke, and on directing A Clockwork Orange (1971).


* Moon Hoax? No thanks! (in Italian), Diegocuoghi.com.

Famous for his obsessive attention to image composition and cinematography and for his glacially slow production pace, Kubrick simply wouldn’t have had the time to direct the dozens of hours of moonwalk footage needed to cover six Moon landings (leaving aside the problem of how to fake them with 1960s visual effects technology).

Moreover, since the early Sixties, Kubrick no longer lived in the United States. He lived in the United Kingdom, where he shot all of his movies (including 2001) and had a well-known fear of travel, especially in aircraft. This would have made it impossible for him to shoot the hypothetical fake footage in the United States and would have required the movie set to be located in the UK, with all the complexities and higher risk of leaks entailed by shooting in a densely populated country instead of using remote locations in the US.

Stanley Kubrick was probably aware of the allegations of his involvement in a movie simulating the Moon trips, so it is probably not coincidental that Danny, one of the key characters in Kubrick’s 1980 movie The Shining, wears a sweater that depicts a rocket and the words “Apollo 11 USA” (Figure 10.3-1). 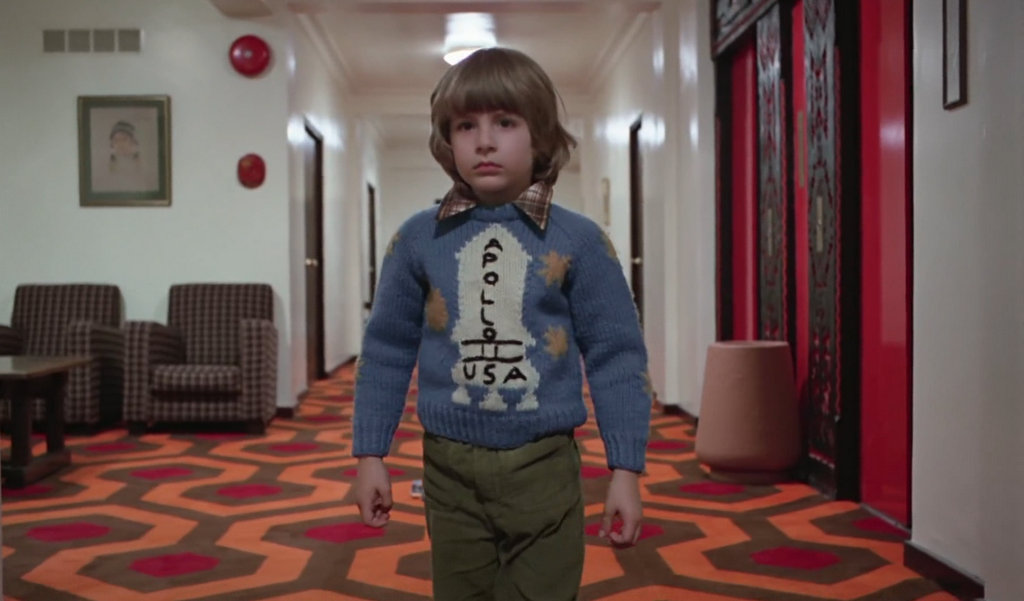 Some Moon hoax theorists, such as Jay Weidner, instead argue that this choice of sweater isn’t an in-joke but is actually a silent act of confession by Kubrick, therefore bizarrely justifying one conspiracy claim by means of another one.*

Arthur C. Clarke, co-writer of the 2001 screenplay with Kubrick, certainly knew about these theories, since he even wrote a facetious letter to NASA’s chief administrator, demanding prompt payment for the job.

Of course there are lunatics who don't believe we ever went there. (Well, some of them may be only pretending to be lunatics.) Recently I was sent a news-story in which it was claimed that the whole Apollo Project took place in a Hollywood studio - and that I wrote the script! This was too good an opportunity to resist, so I wrote to the NASA Administrator as follows:

On checking my records, I see that I never received any payment for this script. Will you please look into the matter urgently? Otherwise I will have to hand it over to my lawyers, Messrs Geldsnatch and Blubberclutch.

I'm still waiting for an answer from Dan...*

Perhaps the most astute objection to the claim that Kubrick shot the fake visual record of the Apollo missions has been suggested by Christian Blauvelt of Hollywood.com: “the moon footage would have looked a hell of a lot better if Kubrick really had directed it.”*

Kubrick’s legendary perfectionism has also suggested other humorous rebuttals to the conspiracy theories that involve him, as shown in Figure 10.3-2. 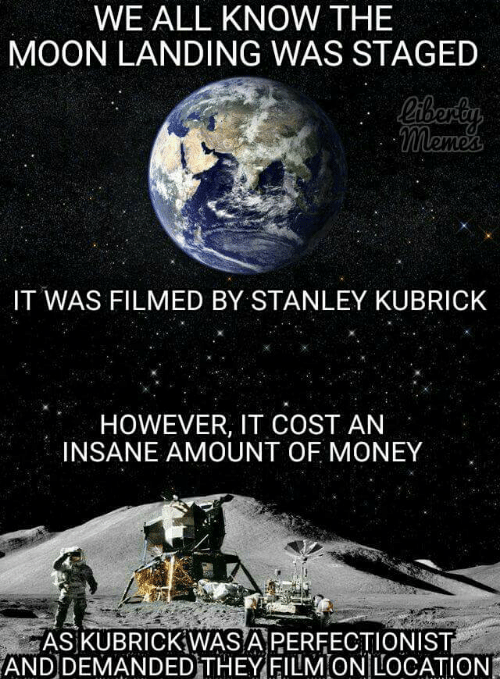 Many believers in conspiracy theories underestimate the difficulty of producing a flawless movie fakery that could stand the test of time, being watched for decades by experts who would inspect every detail of the footage. Even Kubrick himself made mistakes in shooting 2001: A Space Odyssey.

For example, in addition to the incorrectly billowing moondust already mentioned in Section 3.11, in the well-known Blue Danube docking sequence of the movie Kubrick optically shrunk the size of the Orion space shuttle with respect to the other footage of this vehicle so that the space station towards which it was flying would appear larger and more impressive. This size mismatch, however, was spotted by very attentive fans.

NEXT: 10.4 Did the Apollo astronauts never leave Earth orbit?