9.1 Why did the astronauts have guilty looks on their faces and shun public appearances?

IN A NUTSHELL: They didn’t. Their expressions are not guilty, but serious. Hoax theorists cherry-pick the photos in which the Apollo astronauts are serious and solemn and claim that they always had that expression because they felt guilty of their deception. Actually, there are plenty of photographs and film clips in which they smile, joke and laugh. They didn’t shun public appearances: they held countless public talks, TV appearances and were even involved in a few movies. They also wrote very candid autobiographies.


THE DETAILS: It is often argued that Armstrong, Collins and Aldrin had suspiciously gloomy, guilty, sad and reluctant expressions as they were held in quarantine after their Moon trip (Figure 9.1-1).

Figure 9.1-1. The apparently gloomy expressions of Armstrong, Collins and Aldrin (Apollo 11) as they meet US President Nixon on the first day of their post-flight quarantine.


But there’s a good reason why they’re serious in that quarantine photo: they’re listening to President Nixon’s formal speech, so it would have been rather inappropriate for them to be laughing their heads off. Once Nixon changes to a less formal tone, the astronauts smile and laugh with him (Figures 9.1-2 and 9.1-3). 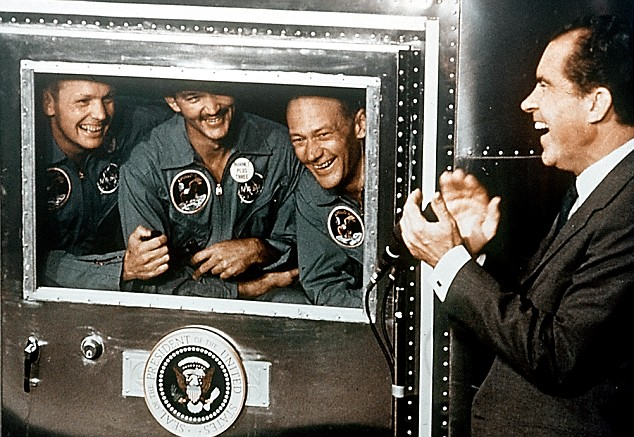 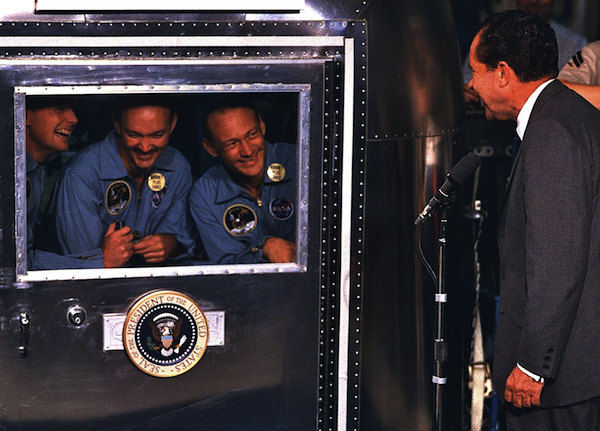 Figure 9.1-3. Another photo of the same event. The astronauts and the President are all laughing. Detail of photo S69-21365.


The Apollo 11 crew is definitely upbeat in the photograph of Figure 9.1-4, taken during post-flight quarantine. 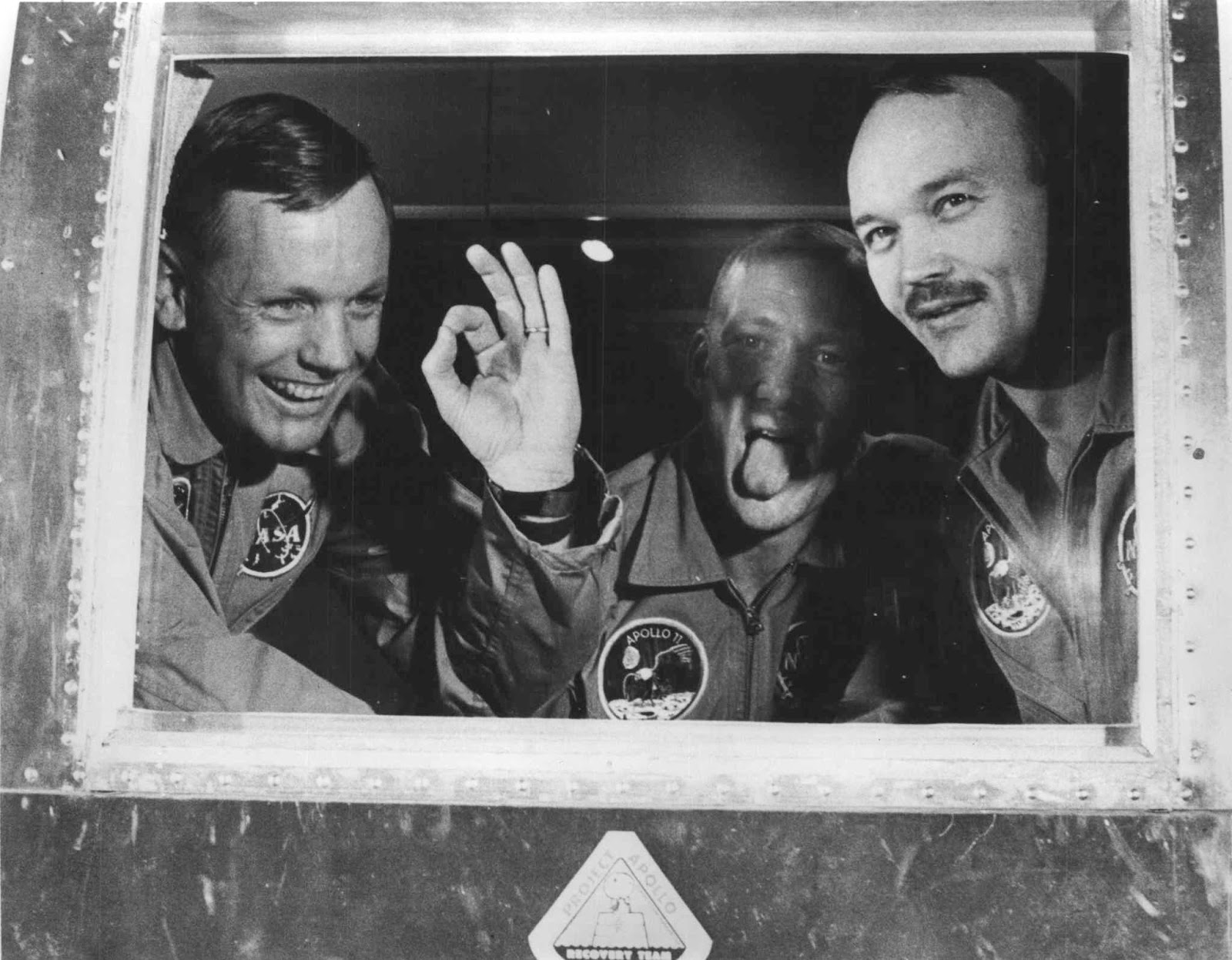 Figure 9.1-4. Left to right, Armstrong, Aldrin and Collins in a playful mood during quarantine.


The Apollo 11 astronauts also look quite at ease during their preflight press conference (Figure 9.1-5). 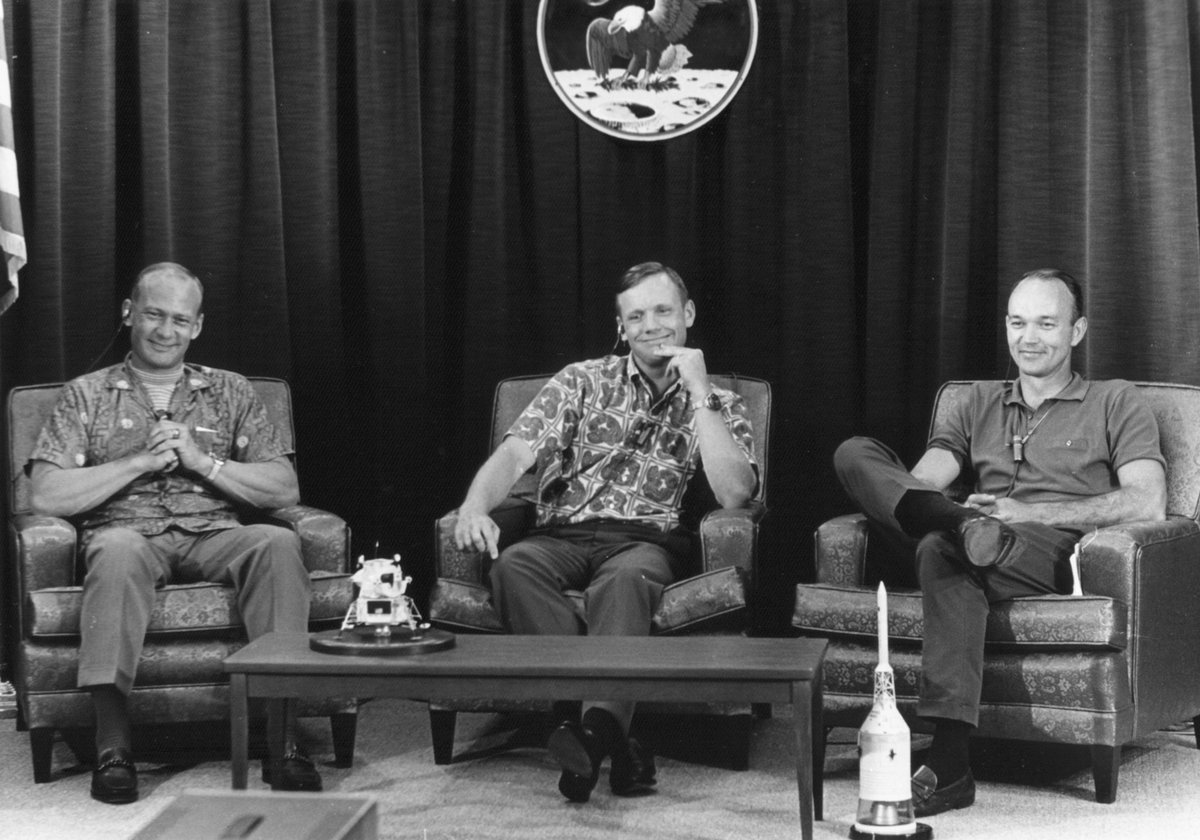 
Likewise, the expressions of the Apollo 12 astronauts in quarantine are anything but gloomy (Figure 9.1-6). 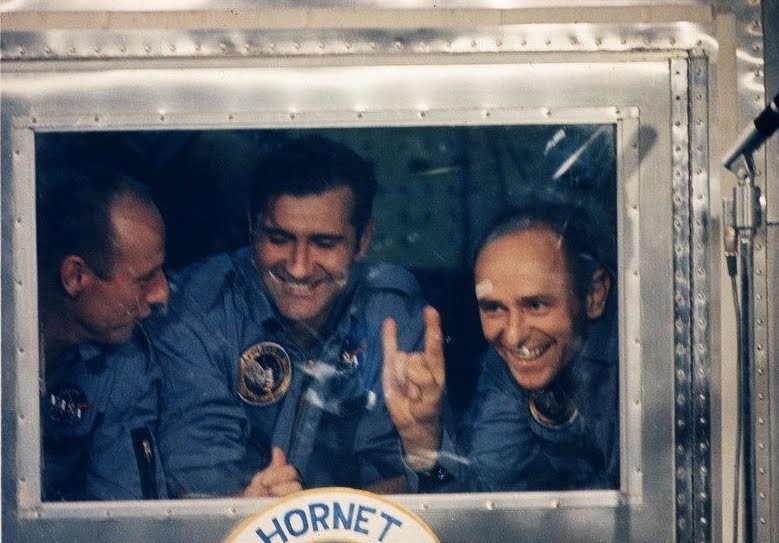 Figure 9.1-6. Left to right: Pete Conrad, Dick Gordon and Alan Bean, the crew of Apollo 12, cheer from their quarantine after returning from the Moon.


Conspiracy theorists and ordinary doubters often mention the press conference held by the Apollo 11 astronauts after returning from the Moon, noting how their expressions are once again gloomy and seem to betray unease. The astronauts utter their words very slowly, with an almost flat tone, as if they were speaking grudgingly. This, it is claimed, is evidence that they are lying uncomfortably. 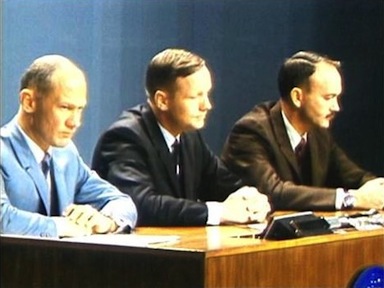 Figure 9.1-7. A frame from the footage of the Apollo 11 post-flight press conference.


Actually, if you watch the entire press conference (Figure 9.1-7) instead of just its first few minutes, it becomes evident that the three astronauts gradually relax and become more at ease while still choosing their words very carefully. There are many moments of laughter, smiles and outright jokes despite the pressure of it being their first press conference after their historic trip. Here’s an example from 37:53 in the video of Figure 9.1-8:

Reporter: Was there ever a moment on the Moon where either one of you were just a little bit spellbound by what was going on?

Neil Armstrong (grinning): About two and a half hours!


Their moonwalk had in fact lasted two and a half hours in all. 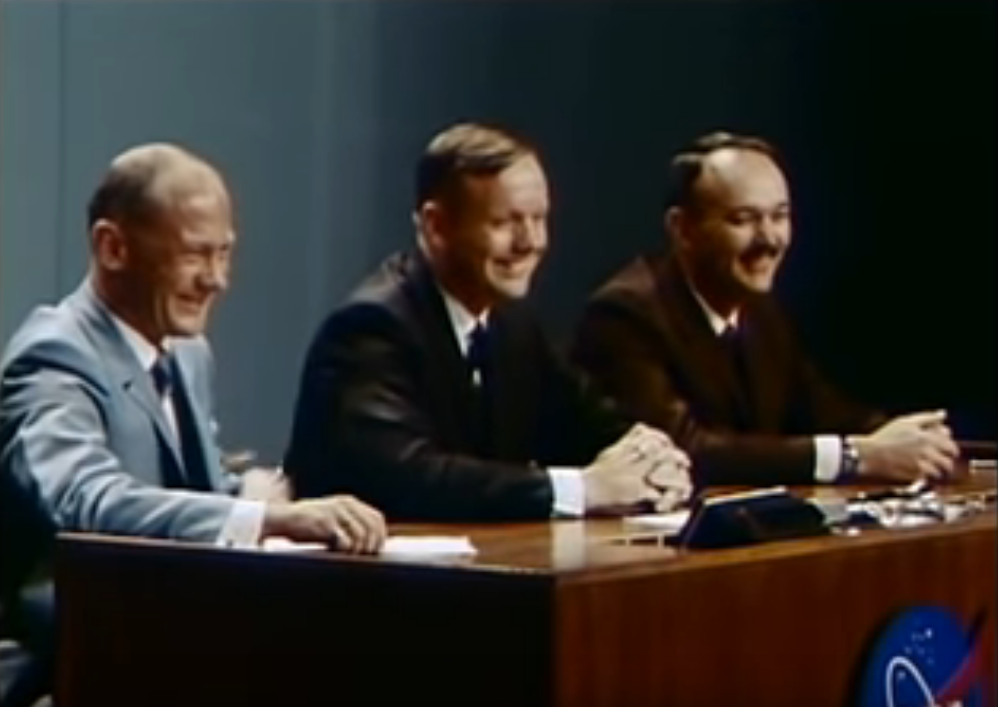 Figure 9.1-10. A selection of quips, smiles and jokes from the same press conference.


Nevertheless, it has to be noted that almost all the Apollo astronauts were test pilots, unaccustomed to the glare of the media spotlight and trained, like all pilots when they have to report on their flight, to speak clearly and precisely, measuring their words. They were also tired not only from the trip to the Moon but also from the subsequent quarantine. They acknowledge their limited media skills even in this post-flight press conference when the discuss the Goodwill Tour that will take them around the world, visiting kings and presidents of many countries:

Reporter: Gentlemen, you're about to take some tours. I wonder what your feelings are. Is that perhaps the most difficult part of the mission or are you looking forward to it?

Armstrong: It’s certainly the part that we're least prepared to handle! [laughter from the audience]

There’s also another practical aspect to be considered when watching this 1969 press conference with today’s eyes: in those days, portable recorders were rare (only one can be glimpsed in the huge crowd of reporters in the video) and therefore journalists had to write down, sometimes in shorthand, what the astronauts said. The official recording of the event would be released only after it had been duplicated, and this would have taken hours with the analog systems of the period, whereas reporters had to go to press as soon as possible.

Accordingly, the astronauts spoke very clearly and slowly to allow everyone to transcribe correctly and also to choose their words very carefully, since they were quite aware of the great historical importance and of the political sensitivity of everything they said. They were, after all, the first human beings in all of mankind’s history to go to the Moon and back.

Moreover, if Armstrong, Aldrin and Collins had instead been at perfect ease and as cheerful as talk show hosts, moon hoax believers would probably argue that this would prove that they were actors.


Anyone who claims that the Apollo astronauts were reclusive and reluctant to appear in public probably is not aware of the various Goodwill Tours mentioned above: the Apollo 11 crew Tour, for example, visited 23 countries in 37 days and was seen by roughly 100 million people.

Contrary to the claims made by some conspiracy theorists, the other lunar astronauts also were anything but sad and guilty-looking after their flights. Over the decades they have been (and still are) part of countless public talks and television events, as well as movies and documentaries. They have also written about their experiences in their often quite candid autobiographies. Far from shunning the crowd, they have promoted space exploration in many ways, including some unorthodox ones.

Buzz Aldrin, for example, in 1976 was on ABC’s Break the bank; he appeared very light-heartedly on Da Ali G Show (2003), recorded a rap song with Snoop Dogg (Rocket Experience, 2009), was a contestant in the 2010 edition of the US show Dancing with the Stars and guest-starred in TV shows like 30 Rock (2010), Numb3rs (2006) and The Big Bang Theory (2012), as well as in the movie Transformers - Dark of the Moon (2011); his many interviews and appearances include CBC’s Beyond Reason (1977), Conan O’Brien’s Conan (2013), ITV's Lorraine (2016), The Late Show with Stephen Colbert (2016), as well as documentaries such as In the Shadow of the Moon (2007). In his autobiography, Magnificent Desolation, he has also acknowledged very openly his successful fight against alcohol and depression.


#OTD in 1976, the ABC TV network announces Apollo 11 astronaut Buzz Aldrin will join Joey Bishop, Jimmie Walker, Craig Stevens and other TV celebrities as a featured player on the daytime game show "Break the Bank." It's been only seven years since he walked on the Moon. pic.twitter.com/sBYPOLjk6W
— Chasing The Moon: The Book (@ChasingMoonBk) April 27, 2019


Jim Lovell (Apollo 8, Apollo 13), too, has made a few movie appearances, for example as himself in Nicolas Roeg’s The Man Who Fell to Earth (1976) next to David Bowie and as captain of the ship that recovers the astronauts in Ron Howard’s Apollo 13 (1995). 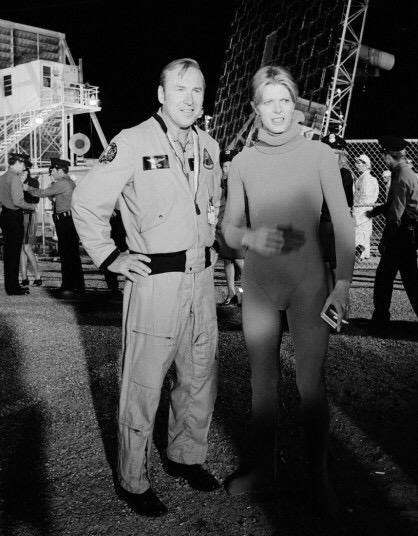 Figure 9.1-14. Jim Lovell, with his back to the camera, wears a US Navy captain’s uniform to welcome actor Tom Hanks (who plays Lovell) at the end of the movie Apollo 13 (1995).


Neil Armstrong’s appearances were so many that they require a separate section of this book.

A special mention goes to Alan Bean, Pete Conrad and Richard Gordon, whose video Apollo 12 Uncensored is a hilarious collection of anecdotes and jokes about their lunar landing that certainly doesn’t appear to suggest guilt or unease.


Figure 9.1-15. Apollo 12 Uncensored spends 45 minutes with the Apollo 12 astronauts candidly talking about their mission, showing how much they enjoyed it and were awed by it. At 24:26 they talk about the Playboy photos smuggled to the Moon; at 26:00 they discuss their Hasselblad timer prank.

This Moon hoax claim is probably one of the most significant: it shows very clearly the symptoms of a world vision in which everything, even an ordinary, occasional serious expression, is interpreted as evidence of a colossal conspiracy and the facts are cherry-picked to bend them to that distorted vision.

NEXT: 9.2 Did Neil Armstrong hide from the media out of guilt?