7.2 How come the Russians didn’t even try? Did they know it was impossible?

IN A NUTSHELL: Actually, they did try, and they tried hard, too. They actually had two separate Moon landing projects. But their giant N1 rockets, designed and built specifically for lunar missions, kept exploding during test launches. The projects were abandoned and kept secret to avoid international humiliation, as detailed in Chapter 1, but the cover-up was revealed when the Soviet Union collapsed.


THE DETAILS: There actually was a Moon hoax, but not the one most space conspiracy theorists talk about: the Soviet one, meant to hide all evidence of their failed attempts to be the first to fly a crewed mission around the Moon and then achieve a crewed lunar landing.

The Soviet Union in fact embarked on not one, but two large lunar projects, named L1 and N1-L3 (there was also a third minor one, based on another giant rocket, the UR-700, which however did not get very far beyond the design stage). These were preceded by uncrewed flights such as Zond 5, which in 1968 flew living beings (turtles, wine flies, meal worms, plants, seeds and bacteria) around the Moon and returned them safely to Earth.


The secret Russian L1 fly-around project was based on two scenarios. In the first one, a Proton rocket would launch an L1 spacecraft (a stripped-down Soyuz) equipped with an additional Block D booster stage, flying directly to the Moon.

In the second scenario, the same type of Proton launcher would place an uncrewed L1 spacecraft and Block D stage in Earth orbit; a three-man crew would climb to Earth orbit using a second Soyuz on another rocket (probably an R-7). Two of the three cosmonauts would then transfer to the L1 spacecraft and accelerate to fly around the Moon, while the third crewmember would return to Earth.

This project was approved and funded by the Soviet authorities and spacecraft manufacturing was started, with the goal of a lunar fly-around by 1967, one year before the Americans. However, the fatal accident of Soyuz 1, which cost the life of cosmonaut Vladimir Komarov, and the reliability problems of the Proton launcher caused delays that allowed the American space program to achieve the first crewed flight around the Moon with Apollo 8 in 1968.

The Russians also had another secret project, the N1-L3 (Figures 7.2-1, 7.2-2 and 7.2-3), for landing a single cosmonaut on the Moon, as described in Chapter 1. However, the expensive, complex and massive N1 launcher, designed not only to get to the Moon but (in a nuclear-powered version) to set up a permanent lunar base and fly to Mars, turned out to be dramatically unreliable. The first four test flights, between 1969 and 1971, were four disastrous failures, mainly caused by the challenge of managing so many engines (thirty in the first stage).

Moreover, Russia’s brilliant and highly influential chief designer Sergei Korolev, who spearheaded the N1 project and had masterminded all of the Soviet Union’s space achievements, died suddenly in 1966.

All this caused delays that gave the United States the time to perfect their technology and be the first to land a crew on the Moon. 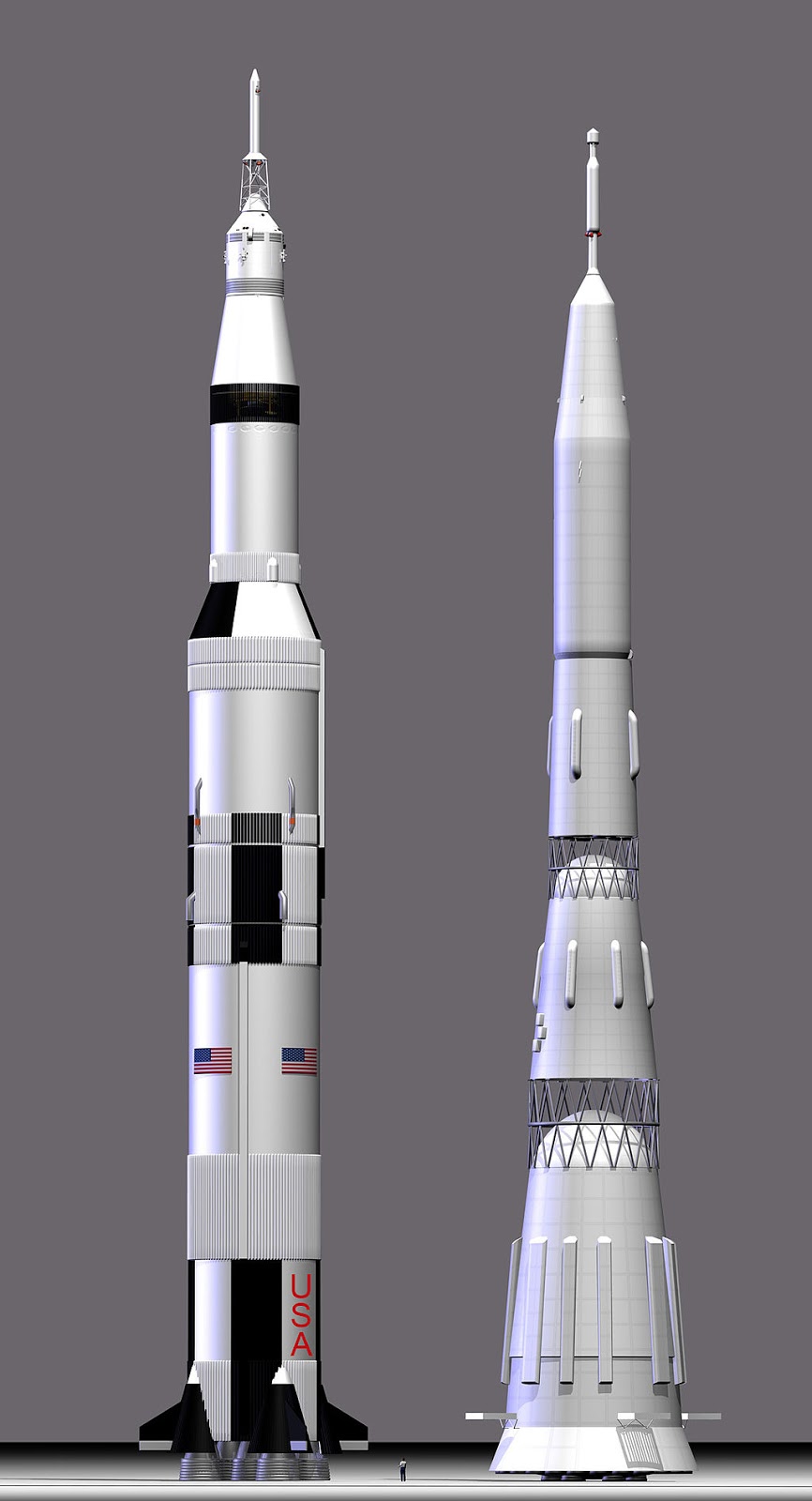 Figure 7.2-1. Size comparison between the Saturn V-Apollo stack (left) and the Soviet N1-L3 system (right). The person at the bottom is to scale. Source: Ebs08, Wikimedia. 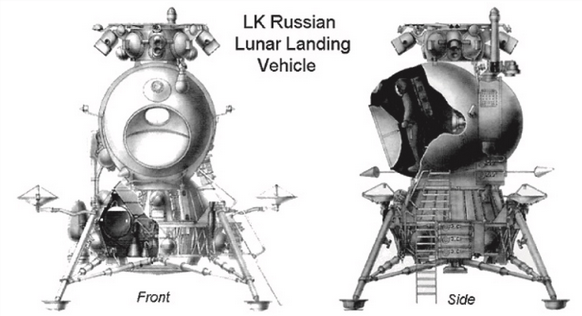 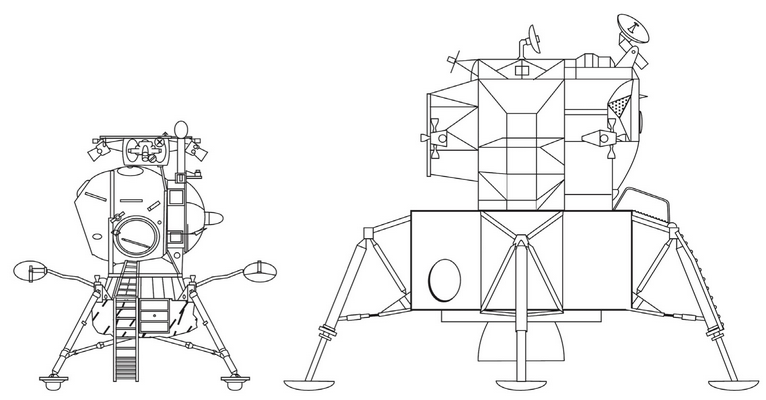 
Russia’s last attempt at a lunar fly-around took place a few days before the Apollo 11 landing and failed when the N1 rocket that carried the uncrewed L1 spacecraft exploded catastrophically on the launch pad.

The Soviet conspiracy to hide all traces of these attempts and failures was quite successful, so much that even today many Moon hoax believers are blissfully unaware of this aspect of the space race. At the time, Russian authorities declared that they had never taken part in a race for the Moon, that they had no intention of taking a Russian to the Moon and that they would never risk a Soviet citizen’s life on such a dangerous endeavor, which could be accomplished just as effectively with uncrewed vehicles. That was the official party line.

Rumors of the explosion of a large Soviet rocket surfaced in the Western press* and there were also unintentional news leaks: in 1981, Soviet spacecraft Kosmos 434, launched in 1971, fell back to Earth and crashed in Australia, and the Soviet authorities stated that it was an old “lunar cabin prototype”, the same term used to describe the American lunar module.

By and large, however, the Western media fell for the Soviet hoax. Even celebrated newsman Walter Cronkite stated on TV in 1974 that “it turned out there never had been a race to the Moon”.*


* Fifth Anniversary – Apollo in Retrospect, CBS, July 1974, as quoted in Cronkite on Space: Inspiration, not Information, by James Oberg, in Space Review, 6 March 2006.

However, the surprising reality of the Russian attempts to land a man on the Moon, long suspected by Western experts and partly known to US intelligence, became very public with the collapse of the Soviet Union in the 1990s.

Soviet censors first allowed public disclosure of the N1 project in the summer of 1989, in a series of articles.*


Today the Soviet Moonshots are described in details in several documentaries and by richly illustrated books such as the following:


Figure 7.2-4. An excerpt from a Russian documentary covering the Soviet lunar plans. The N1 is discussed from 3:00 onwards.


Although the Soviet space program to reach the Moon with a crew was not successful, the fact that it existed (and the huge investments that it entailed, together with the uncrewed reconnaissance and testing flights) disproves any argument claiming that the trip was considered technologically or physically impossible.