These are screenshots from this book’s all-time statistics, taken on 1 January 2019, as provided by Google.

The chart begins in May 2010 because that’s when I created this site to promote what was then an e-book and paperback project. Since its migration to a fully online version in November 2018, traffic has picked up quite remarkably. 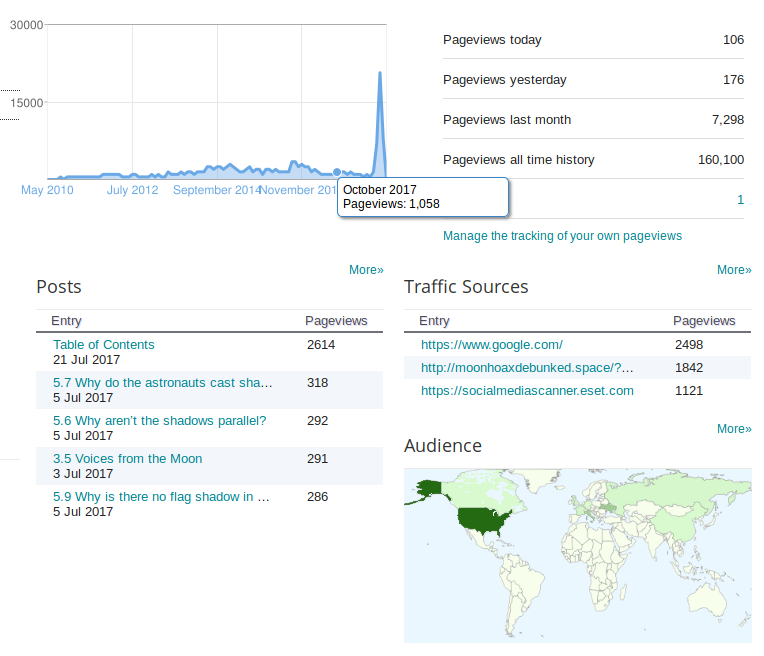 Aside from the Table of Contents, which is the home page of the site, the most read section is 5.7 Why do the astronauts cast shadows of different lengths? but this should not yet be considered an indicator of the hottest topics, since the book was completely restructured in 2018: it was posted initially as pages, not posts, and that’s why many pages now marked “old” or no longer online have such high view counts. 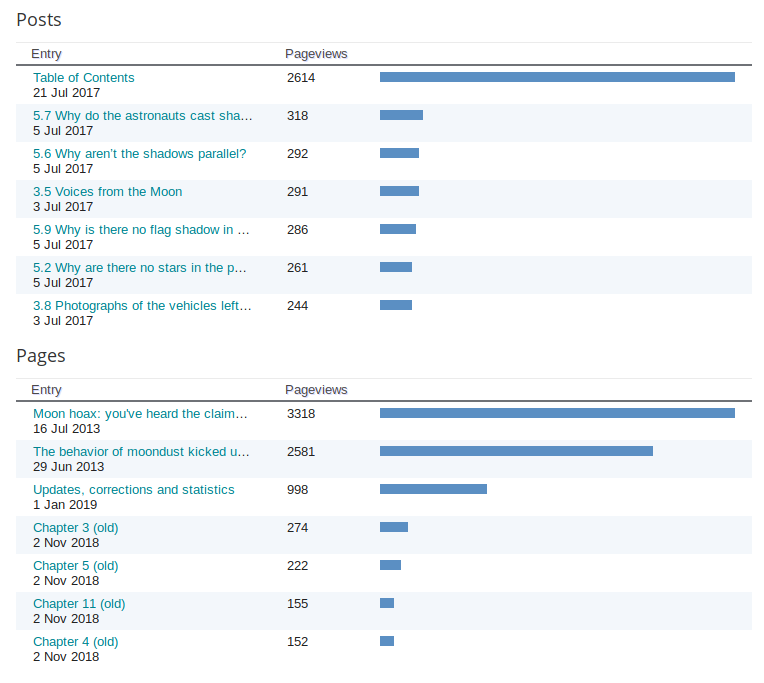 Google is the main referring site, and that’s no surprise. The most popular search keywords are all related to moon hoax and debunked in their various permutations. 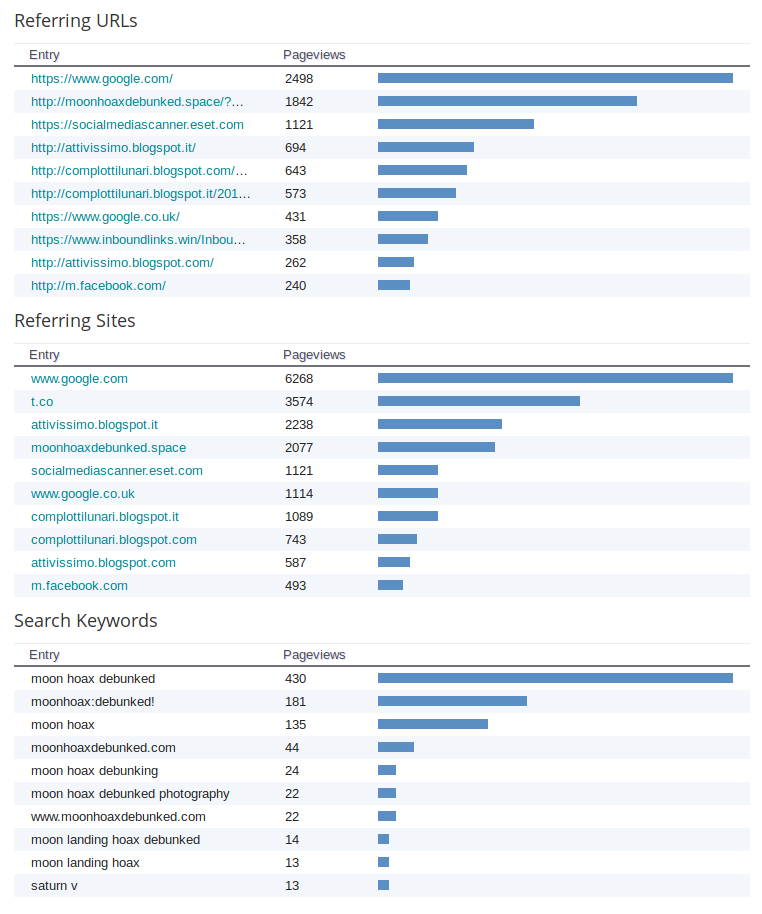 I’m really surprised by the fact that Ukraine is the second source of page views in all the world. I’m not surprised by Italy’s third place, since I’m fairly well-known as a journalist and radio show host there. It seems that Ukrainians are very keen to find out about a part of world history that maybe they experienced through the censorship of the Soviet Union. So are people in Israel; more so than Brits.

In terms of browsers and operating systems, Internet Explorer and Windows are the clear leaders, but bear in mind that this is an all-time statistic reaching back to 2010 (although most views occurred during 2018). 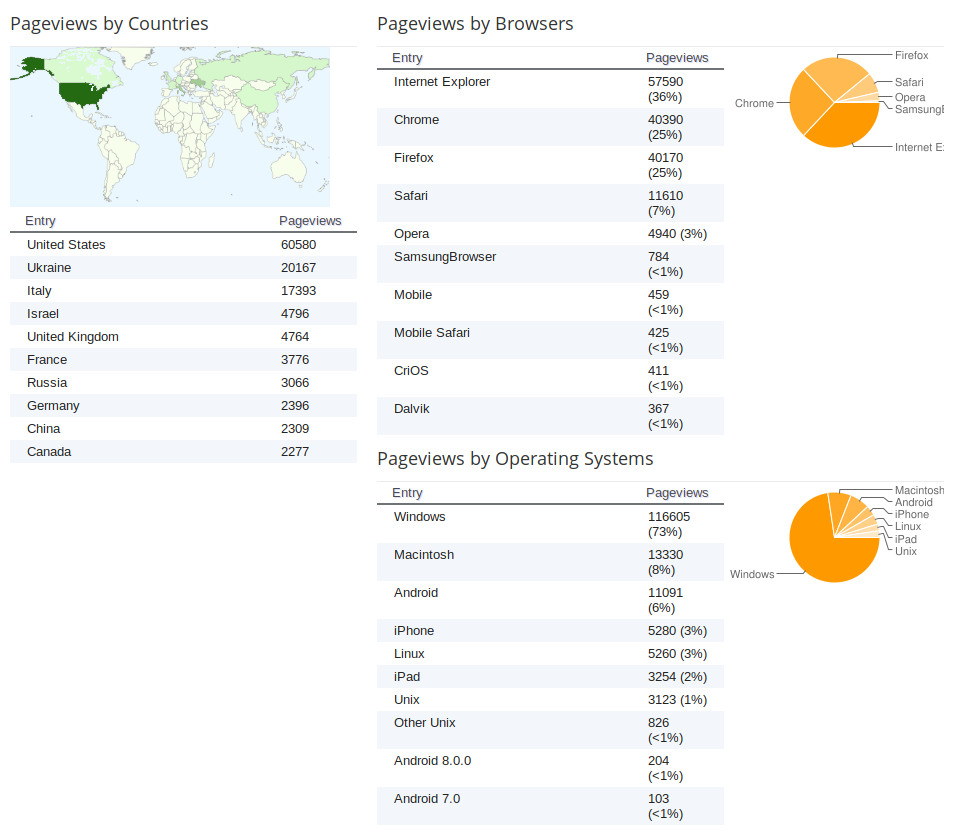 Updates and corrections to the 2019 edition

2018/12: I’m revising the online book extensively, adding lots of material from the Italian edition and fixing the numbering of the figures. This is a slow process. Accordingly, the numbering is a bit ratty and some section-to-section links might be broken. If you spot anything, let me know. Thank you for your patience.

2018/11: In Section 1.3, I've corrected the date of the GRAB-1 launch to 22 June, 1960 from July 5 because this is the date reported by the Smithsonian and Encyclopedia Astronautica. June 22 was the date when the first signals were received.

2018/10: I’ve updated and posted the entire book to this website. Due to time constraints, I will no longer be updating the paper and EPUB editions, which will remain available on Amazon and elsewhere. I‘ve reorganized figure numbering to allow faster updating and additions without having to worry about manually renumbering all the figures and figure references in a chapter.


Updates and corrections to the 2016 edition

I’ve introduced a few typographical fixes, such as proper apostrophes (’) instead of “computer” apostrophes ('), and tweaked the stylesheet for clarity.

I’ve changed all occurrences of manned to a more gender-neutral crewed, except where I am quoting someone’s exact words or referring to an organization that has manned in its name (e.g., the Manned Spaceflight Center).

I’ve also reduced the number of footnotes, including as many as possible in the body of the text.

I’ve fixed a few UK/US English inconsistencies, such as sunburned/sunburnt. I’m British, but I’ve used US English rules in the book because I know that otherwise I’ll get heaps of mail complaining about my “misspelling” of colour, metre, tranquillity and so on. Brits, instead, will cringe and bear politely.

In Section 1.7, “Post-Apollo Explorations”, I’ve added China’s Chang’e 3/Yutu soft landing on the Moon, which occurred in 2013 shortly after I had published the first edition.

In Section 8.8, “It’s impossible to cool an astronaut in a vacuum”, I’ve corrected a typo: use self-contained is now used self-contained.

In Section 16.3, “Apollo astronauts”, sadly I’ve had to update this section to record the deaths of some Apollo astronauts. I’ve also corrected a typo which made it appear that John Young had flown on Apollo 6 (it was actually Apollo 16).

Return to Table of Contents