IN A NUTSHELL: They are. NASA has always provided access to copies of its technical documents, photographs and film footage for anyone willing to file a formal request and pay for duplication and postage. Now that documents can be distributed at no cost via the Internet, an immense amount of NASA data is available with just a few mouse clicks.


THE DETAILS: Bill Kaysing, on page 7 of his book We Never Went to the Moon, asks this question:

Why is it that NASA’s Apollo records are not classified, but are also not available to the general public?

This criticism was perhaps excusable when Kaysing wrote the first edition of his book, in 1974, but today NASA’s Apollo documents are easily available on the Internet: tens of thousands of pages of manuals, technical diagrams, reports, and all the photographs of all the Apollo flights. A partial list of these archives is in the References section at the end of this book.

Kaysing’s claim, however, was factually incorrect even when it was first made: even then, NASA already provided all public records to anyone who requested them and paid the duplication and postage fees. Such requests, however, were rather rare, since just one of the manuals of the Lunar Module, the Apollo Operations Handbook – Lunar Module, LM 10 and Subsequent, has over 1700 pages, so duplication costs were high.

Some documents were kept confidential for a few years because they discussed military technologies (such as the ones used in the Apollo 11 lunar camera) or technologies that could be used for military purposes by potential enemies, but even these were soon declassified.

For example, even the documentation related to a truly state-of-the-art item like the Apollo guidance and navigation computer was declassified and made available to the public already in 1973, just four years after the first Moon landing and less than one year after the end of the lunar missions (Figure 9.5-1). 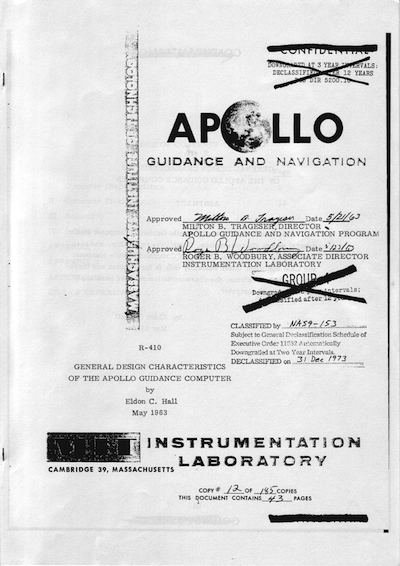 Figure 9.5-1. The cover of the design report on the Apollo navigation computer. Note the stamps indicating release to the public in 1973.

NEXT: 9.6 How is it possible that the Saturn V blueprints have been lost?