9.2 Did Neil Armstrong hide from the media out of guilt?

IN A NUTSHELL: No, he simply picked his media appearances very carefully after the overwhelming barrage of public events that followed the Moon landing. He preferred technical conferences, in which he was anything but shy and indeed proved to have a wry sense of humor.


THE DETAILS: According to some hoax theorists, Neil Armstrong, first man on the Moon, became a recluse and never appeared on TV, refusing all interviews, after the initial celebrations for the Apollo 11 trip. This absence from the media was allegedly due to his guilt for lying to the entire world.

The truth is quite different. After Apollo 11, he granted countless interviews, such as this one to the BBC (Figure 9.2-1):


Figure 9.2-1. Neil Armstrong interviewed by Sir Patrick Moore for BBC’s The Sky at Night (1970). A transcript is available.


In the 1970s Armstrong even did TV advertising campaigns for Chrysler (Figure 9.2-2).


In 1983 he was a guest on the TV show hosted by legendary entertainer Bob Hope, who was Armstrong’s personal friend. They had toured together the American military bases in Vietnam in December 1969. In this TV appearance, Armstrong chatted and joked with Bob Hope (Figures 9.2-3 and 9.2-4). 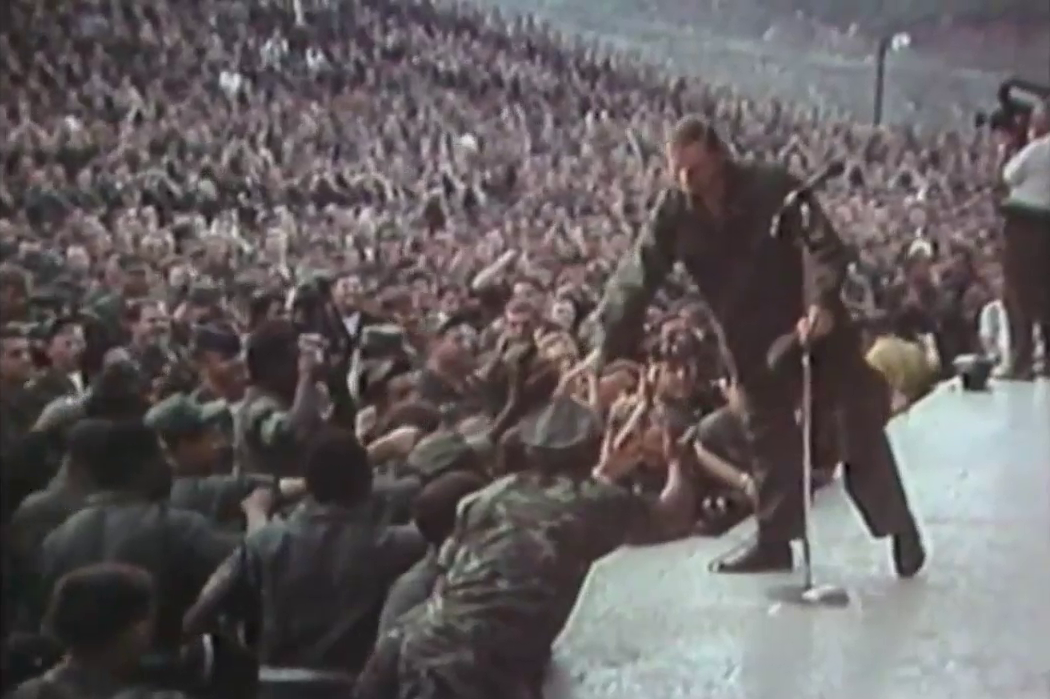 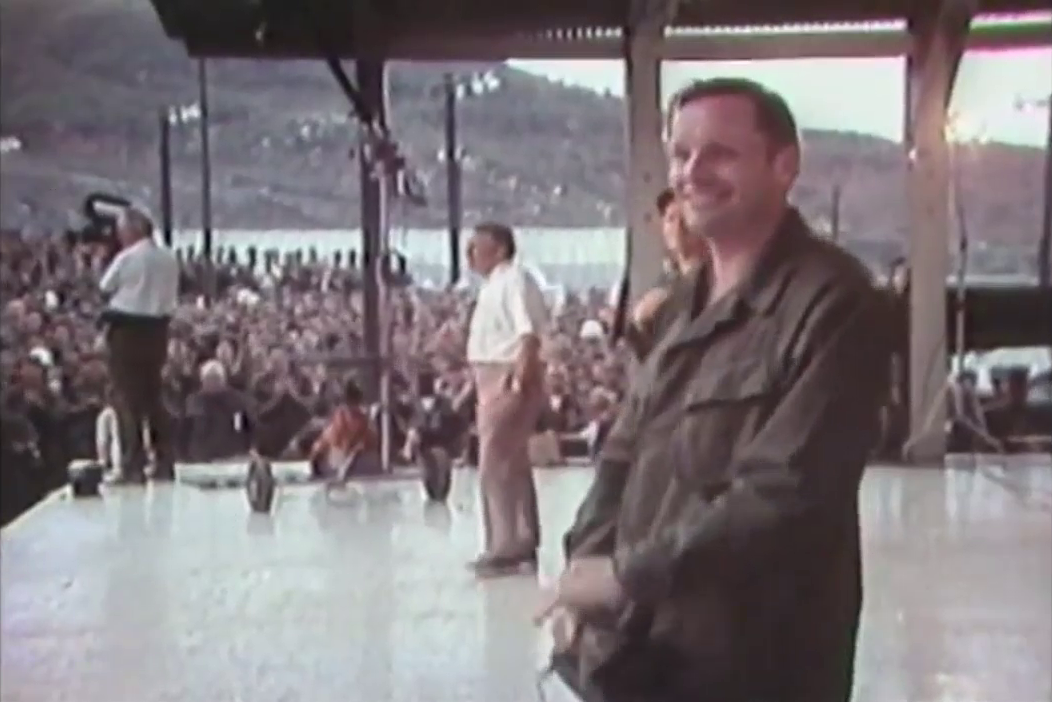 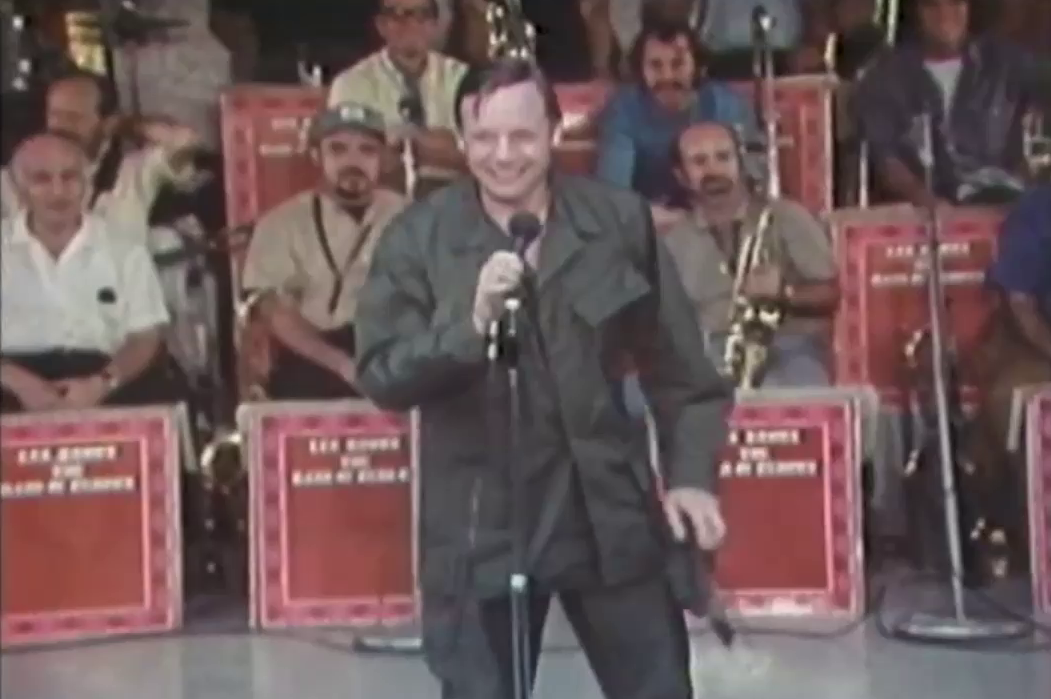 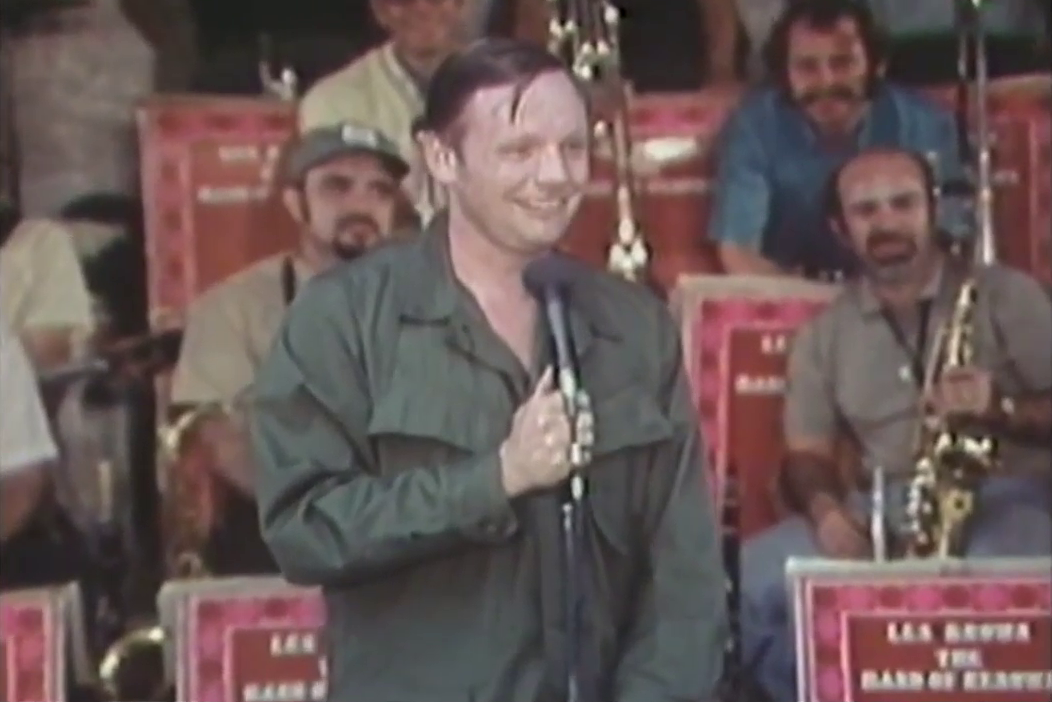 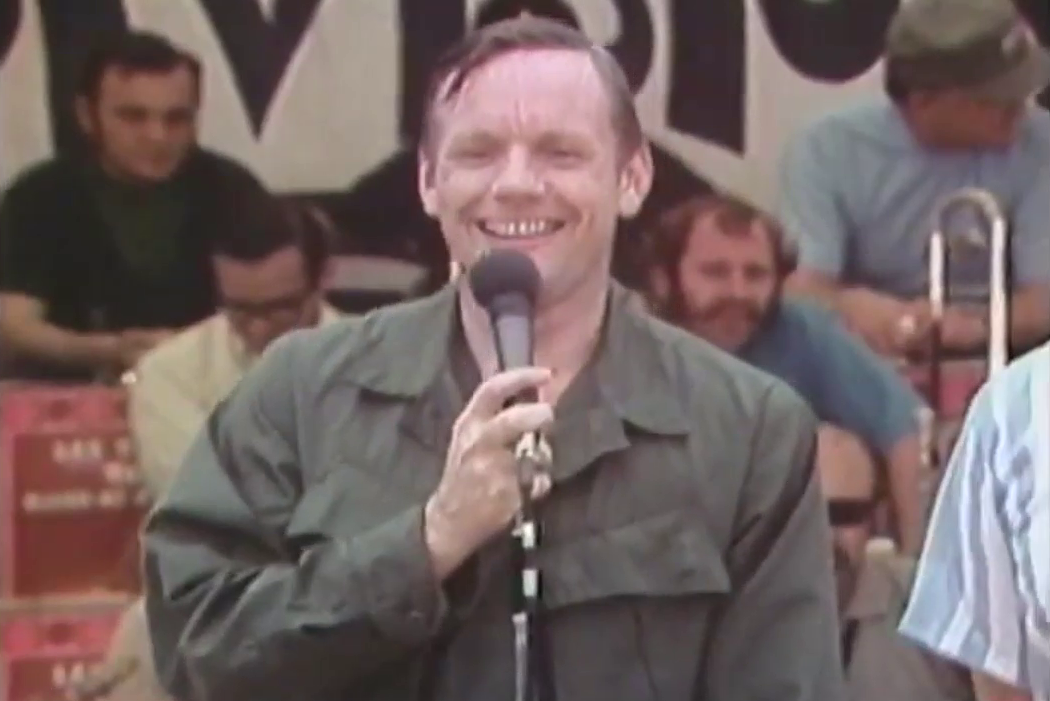 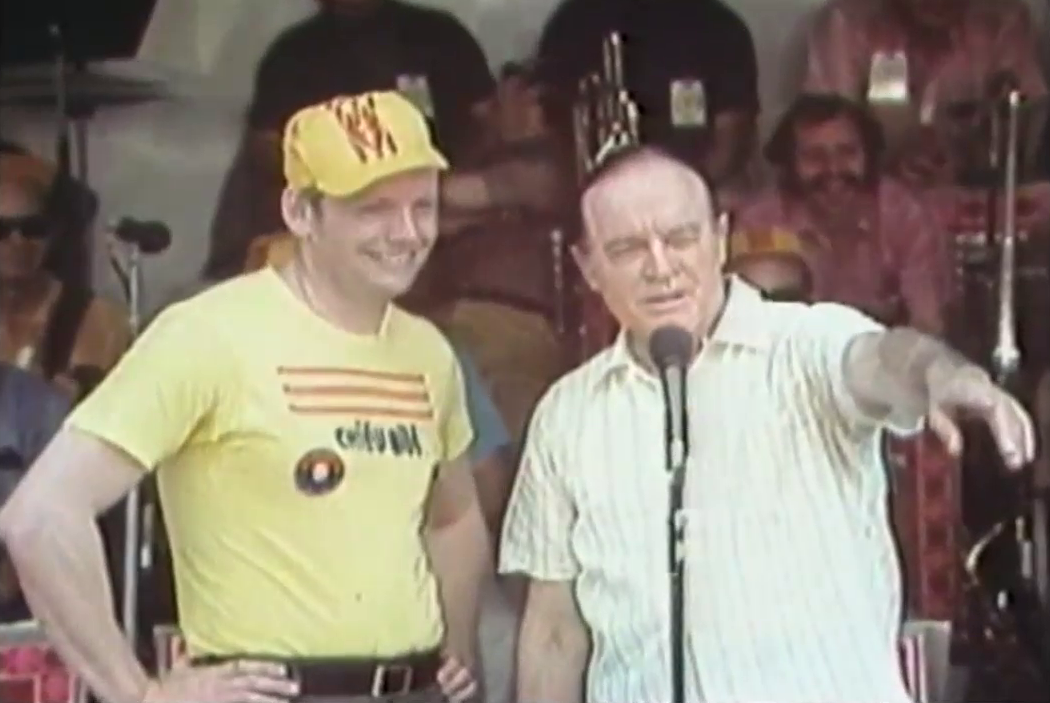 Figure 9.2-4. A few stills of Neil Armstrong with Bob Hope during their tour visiting American troops in 1969.


He was also a guest on TV programs all over the world. Figure 9.2-5 shows him on Italian national channel RAI in 1984. In 1999 he and Buzz Aldrin were even guests on the Italian Festival di Sanremo song contest. 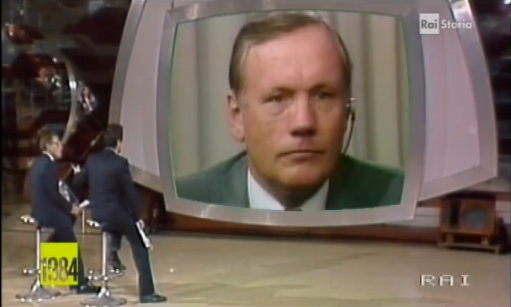 
However, it is true that Armstrong was famous for being a man of very few words. Apollo astronaut Gene Cernan describes him as follows in his autobiography, The Last Man on the Moon:


This fellow was a year ahead of our class, and so modest that you would never know he had flown seventy-eight missions in Panther jets off the aircraft carrier Essex and won three air medals. His name was Neil Armstrong. Years later, when Neil was a top test pilot for the experimental X-15 rocket plane at Edwards Air Force Base, Smitty dropped by for a visit and soon found himself beneath the house with the quiet aviator, wrapping pipes with insulation tape. Smitty, by then an aeronautical engineer, was naturally curious about the plane, which was the hottest thing in American skies, and asked, “So, Neil, you’re flying the X-15 now?” Neil kept wrapping the pipes and said, “Yup.” End of conversation. Neil was not one to worry about impressing people with mere words, content to let his work speak for him. In fact, he was so quiet that when he made his historic first step onto the Moon and said, “That’s one small step for man, one giant leap for mankind,” those of us who knew him were not surprised that he had come up with such a memorable phrase. The real surprise was that he said anything at all.


It is also true that in later years Armstrong chose his media appearances very carefully and protected his own image against anyone who tried to profit from his lunar endeavor.

For example, in 1994 he sued Hallmark Cards for using his name and voice without permission for a Christmas decoration. Proceeds from the settlement, less legal feeds and costs, were donated to Purdue University, Armstrong’s alma mater.

In 2005 Armstrong’s barber auctioned off the astronaut’s hair clippings, which were bought by a collector for 3,000 dollars. Armstrong threatened legal action and the barber donated the proceeds of the auction to a charity.

One of Armstrong’s few personal interviews was granted in 2005 to CBS’s 60 Minutes (Figure 9.2-6) when his biography, curated by historian James Hansen and entitled First Man: The Life of Neil A. Armstrong, was published.

Another example of his public appearances is this very humorous and at the same time profound video from 2002 (Figure 9.2-7):


Armstrong nevertheless remained an extremely modest and reserved man who preferred to talk about technical matters rather than his personal feelings. He was part of the public inquiry boards for the Apollo 13 accident in 1970 and for the Challenger disaster in 1986. These roles placed him once again in the public spotlight at two dramatic times of the United States’ space program.

He also hosted the documentary series First Flights with Neil Armstrong in 1991 (Figure 9.2-8), in which he explored the history of aviation by interviewing the people who made that history and flew the most extraordinary aircraft. He was also involved in the PBS documentary Kitty Hawk: The Wright Brothers’ Journey of Invention (2003), in which he lent his voice to Orville Wright. In 2010 he again voiced a character, this time for the animated movie Quantum Quest: A Cassini Space Odyssey together with James Earl Jones, Samuel L. Jackson, Chris Pine, William Shatner and many other famous actors.


Figure 9.2-8. The trailers of the three seasons of First Flights with Neil Armstrong, a series of documentaries on the history of aviation.


More recently, he granted extensive technical interviews to the curators of the Apollo Lunar Surface Journal and appeared in the documentary When We Left Earth (2008).

On a lighter note, in 2009 he celebrated the fortieth anniversary of the first Moon landing by joining Aldrin and Collins at the John H. Glenn Lecture, an annual conference held at the National Air and Space Museum in Washington, D.C., and attended the gala for the fortieth anniversary of Apollo 12 at the Kennedy Space Center, where he demonstrated a talent for self-effacing humor.


In 2010 he also spoke publicly quite vehemently against the plans of the Obama administration to restructure NASA.*

These don’t seem to be the choices of someone who is shunning publicity out of guilt.

Moreover, Armstrong wasn’t at all impossible to reach: for example, in April 2011 some news reports claimed that he had been a follower of Indian guru Sai Baba, who had just died. So I contacted James Hansen, Armstrong’s biographer, to clarify the matter.

Within a day, I received a personal e-mail from Neil Armstrong himself: 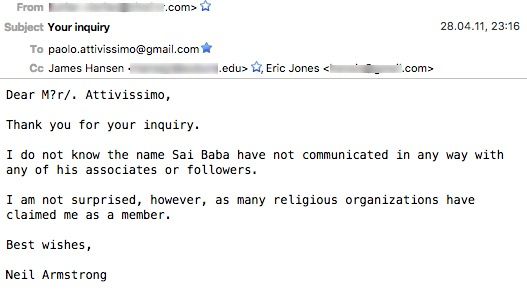 
In late April 2012, a few months before he died, he granted Alex Malley of CPA Australia a long interview (Figure 9.2-11, partly transcribed here) which was probably the last of his career and in which he told many details of his professional history and of his world view. 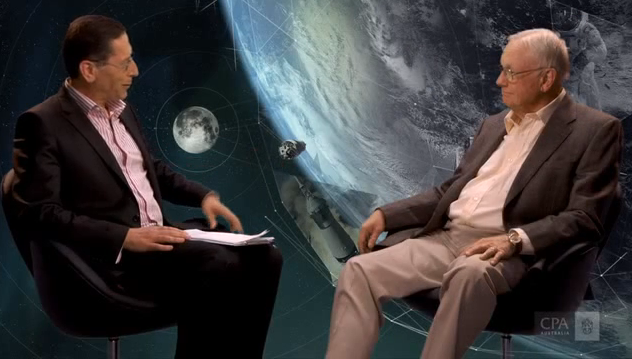 
Here’s another indication that the alleged reclusiveness and humorlessness of Neil Armstrong are journalistic myths: a photograph taken in 1966 (Figure 9.2-12), when Armstrong was part of the prime crew of Gemini 8 together with David Scott, while Pete Conrad and Dick Gordon formed the backup crew. 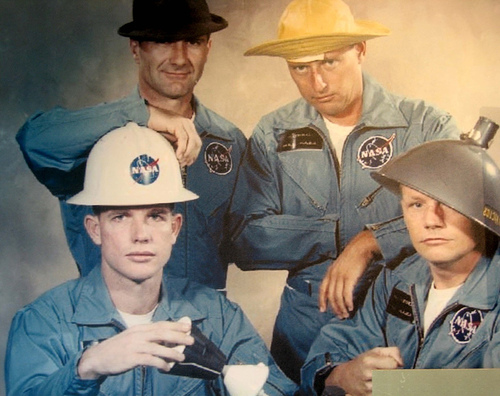 
NEXT: 9.3 How come NASA refuses to deal with the hoax allegations?