IN A NUTSHELL: It was blasted away. Dust moved by a rocket exhaust in an airless environment such as the Moon doesn’ billow up around the spacecraft and then settle on it: it travels in straight lines away from the vehicle, unhindered by any air resistance, and therefore is unlikely to end up on the vehicle’s footpads.


THE DETAILS: Photographs of Apollo 11’s lunar module footpads on the Moon show them to be completely dust-free (Figure 8.14-1). To some this seems suspicious. Shouldn’t the engine blast have blown at least some dust onto the footpads? Says Bill Kaysing in the 2001 documentary Did We Land on the Moon?: 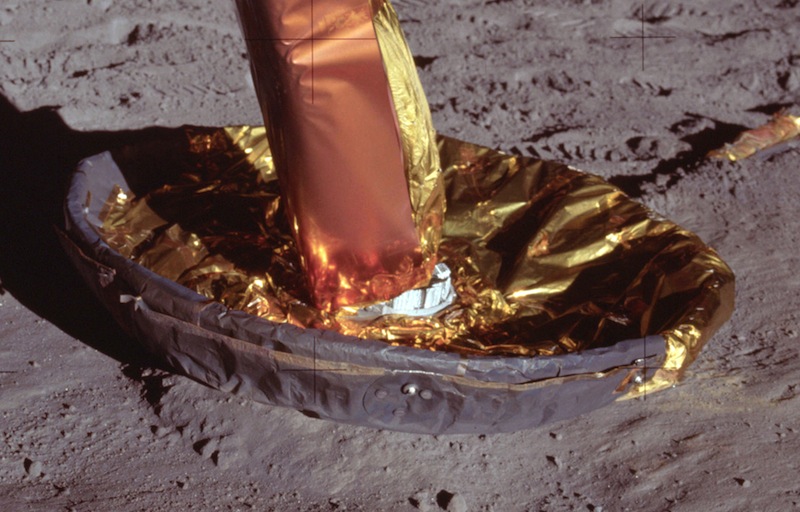 However, the lack of dust on the footpads doesn’t prove that the spacecraft was actually a mockup delicately placed on a movie set and that the hoax perpetrators incredibly forgot to spread some dust on the footpads to make the scene more realistic. There’s a simpler, entirely non-conspiratorial explanation: on the Moon, dust doesn’t “descend” as Kaysing suggests, simply because it doesn’t rise and float in the first place.

The Moon is airless, so there’s no atmosphere to carry the dust and allow it to form billowing clouds that then settle. The dust simply gets blown sideways and outward, racing roughly parallel to the ground and away from the landing spot, and then falls down at the end of its essentially rectilinear trajectory, without floating around. This effect is clearly visible in the footage of the Apollo lunar landings and liftoffs.

Moreover, in a vacuum only the dust that is struck directly by the exhaust gets moved, and the exhaust expands very rapidly and just as rapidly weakens, so the displacement is very localized (on Earth, such a displacement has a broader action because the exhaust displaces the surrounding air, which in turn displaces dust, spreading out the effect). Indeed, the Apollo 11 photographs show pebbles and dust a short distance out from the footpads, as evidenced in Figure 8-14 by the footprints behind the LM’s landing gear.

The dust that is moved, however, can travel quite a distance at high speeds, since there’s no air resistance to slow it down and the low gravity drags it down more gradually than on Earth. On Apollo 12, dust displaced by the LM exhaust reached the Surveyor probe, roughly 200 meters (650 feet) from the LM, as evidenced by the sandblasting detected on the side of Surveyor that faced the LM.*

NEXT: 8.15 How can the astronauts’ footprints be so sharp?