8.6 Wouldn’t the camera films have melted or frozen on the Moon?

IN A NUTSHELL: No. Temperature extremes refer to the lunar surface, from which the films were insulated by vacuum. In any case they were not reached during the Apollo missions, which landed on the Moon shortly after the beginning of the two-week-long lunar day at the landing sites, when ground temperatures were far lower. The films were also a heat-resistant type used for high-altitude reconnaissance and the cameras were treated to reflect the heat from direct exposure to the Sun, which is comparable with the heat from sunlight on a mountaintop on Earth.


THE DETAILS: Gerhard Wisnewski is one of the many hoax theorists who claim that the extreme temperatures of the lunar surface would have damaged the camera films irreparably and therefore the photographs must be fake. In his book One Small Step, Wisnewski argues thus:

There was no other protection against temperature extremes of over 100°C plus and under 100°C minus [...] It was to be expected that the sensitivity of the chemical films would be affected by the extreme temperatures – if indeed not rendered useless by temperatures of over 100°C.

However, a little fact-checking shows that Wisnewski’s premise is incorrect due to a common misconception about temperatures in space.

This is a crucial detail, since on the Moon there’s no significant atmosphere that can be heated by the ground and therefore there is no way to transfer heat from the ground to the films. Vacuum is a very good heat insulator, as thermos flasks demonstrate. In a vacuum there is no heat transfer by conduction or convection, which are the main heating and cooling processes on Earth. There’s no air to warm or chill objects by contact.

On the Moon and in space, heat is transferred between objects that are not in mutual contact only by radiation: the same principle by which we are warmed when standing next to a fire. Clearly the heating produced by radiation is nowhere as intense as heating by direct contact: there’s a significant difference between warming your hands in front of a fire and putting your hands in the fire.

Consequently, on the Moon the temperature of the ground is essentially irrelevant as regards film temperatures and claiming that ground temperatures would overheat or freeze the films is a misleading and amateurish scientific error.

Wisnewski also doesn’t consider that the reported ground temperature extremes are reached only far into the lunar day (which entails fourteen Earth days of uninterrupted exposure to the Sun) and just before local sunrise (after fourteen days of continuous darkness). But all the Moon landings took place shortly after local sunrise, when the temperatures were far from these extremes.

The maximum elevation of the Sun above the horizon during the Apollo moonwalks was 48.7°, at the end of the third excursion of the Apollo 16 crew. This mission recorded ground temperatures of 57°C (135°F) in sunlight and -100°C (-140°F) in shadow.

The only heat to which the Apollo films were exposed was therefore produced by solar radiation. An object exposed to the Sun on the Moon receives essentially the same amount of heat that it receives on Earth on a mountain top on a clear day, since heat transfer by radiation depends on the distance from the heat source and the Earth and the Moon are essentially at the same distance from the Sun. There’s nothing magically incendiary about the sunlight that strikes the Moon: in terms of heat, it’s roughly the same that we receive here on Earth.

In other words, a film exposed to sunlight on the Moon is affected by the same level of thermal stresses that wouldaffect it on Earth on a bright sunlit day on a high mountain. As we all know, before digital cameras were introduced, tourists were quite able to take photographs in the mountains and even in the heat of tropical forests or deserts without their films melting or spoiling their colors.

One might object that on the Moon the sunlit side of the camera is heated intensely while the shadow side cools just as dramatically. However, these processes are not instantaneous, because once again there’s no air to carry the heat from the camera body to the film or away from the film into space. The camera is in vacuum and therefore the film is like in a thermos flask. Heat transfer between the film and the camera occurs only at their few points of mutual contact. In any case, the cameras used on the Moon were being moved all the time by the astronauts and therefore were never left for long with the same side exposed to the Sun.

Besides, if someone argues that it would have been impossible for film to withstand the vacuum and the temperatures on the Moon, then he or she is implying that all the photographs ever taken on film in space during Russian, European and American spacewalks are fake, because there are no differences, in terms of temperature, vacuum and exposure to sunlight, between the conditions on the Moon and those in Earth orbit.

For example, Figure 8.6-1 shows US astronaut Ed White during his spacewalk outside the Gemini 4 spacecraft in 1965. He is carrying an ordinary camera and his picture was taken with another camera, which also was outside in space. Neither of the films in these cameras melted or was spoiled. 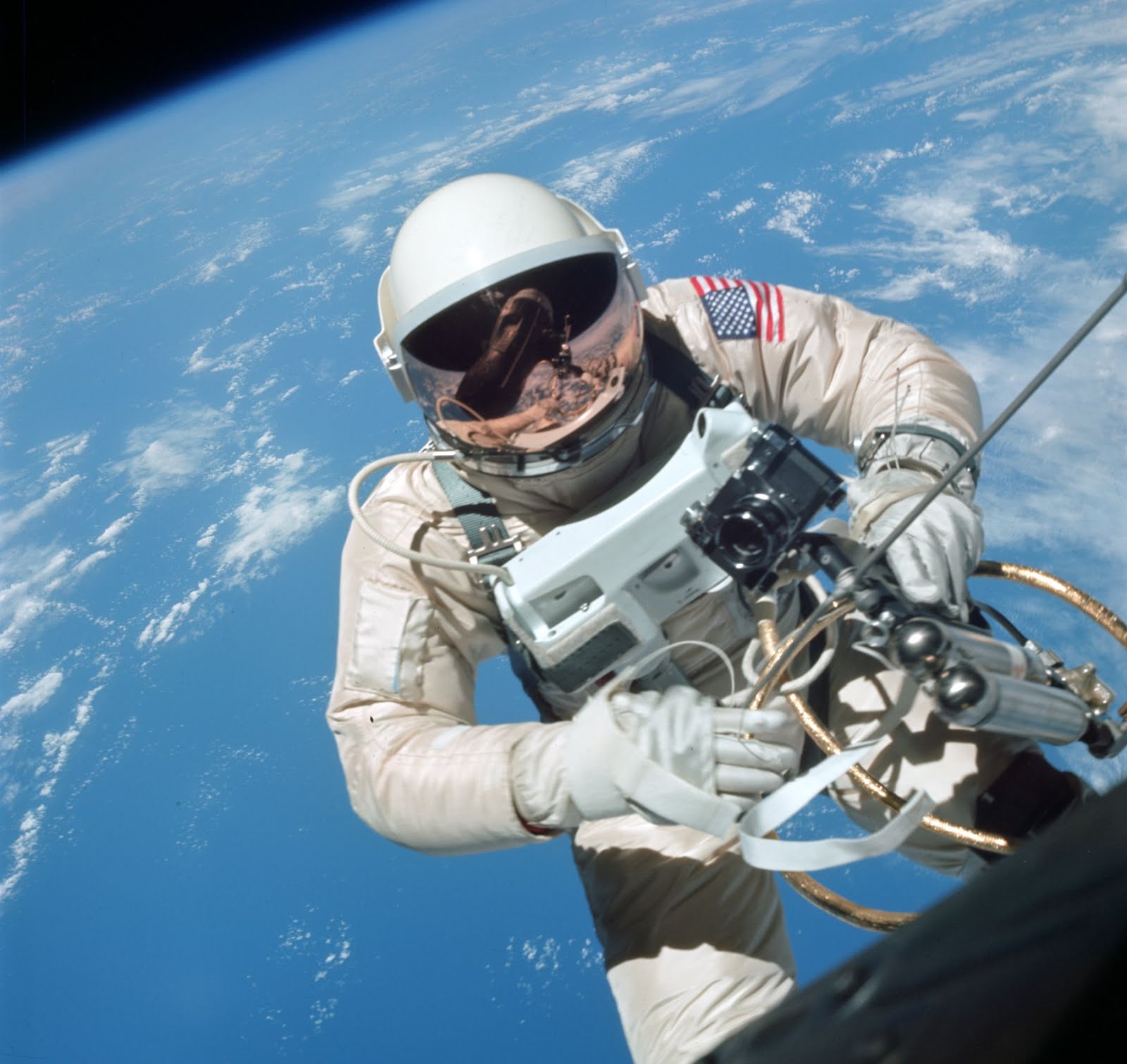 Figure 8.6-1. Ed White used an ordinary camera (which can be seen here in front of the astronaut’s chest), with no thermal protection, during his spacewalk in 1965. NASA photograph S65-30431.

Moreover, the Apollo lunar cameras had been treated specifically to have reflective surfaces instead of the traditional black finish, as shown in Figure 8.6-2. This treatment reflected most of the heat received from the Sun. 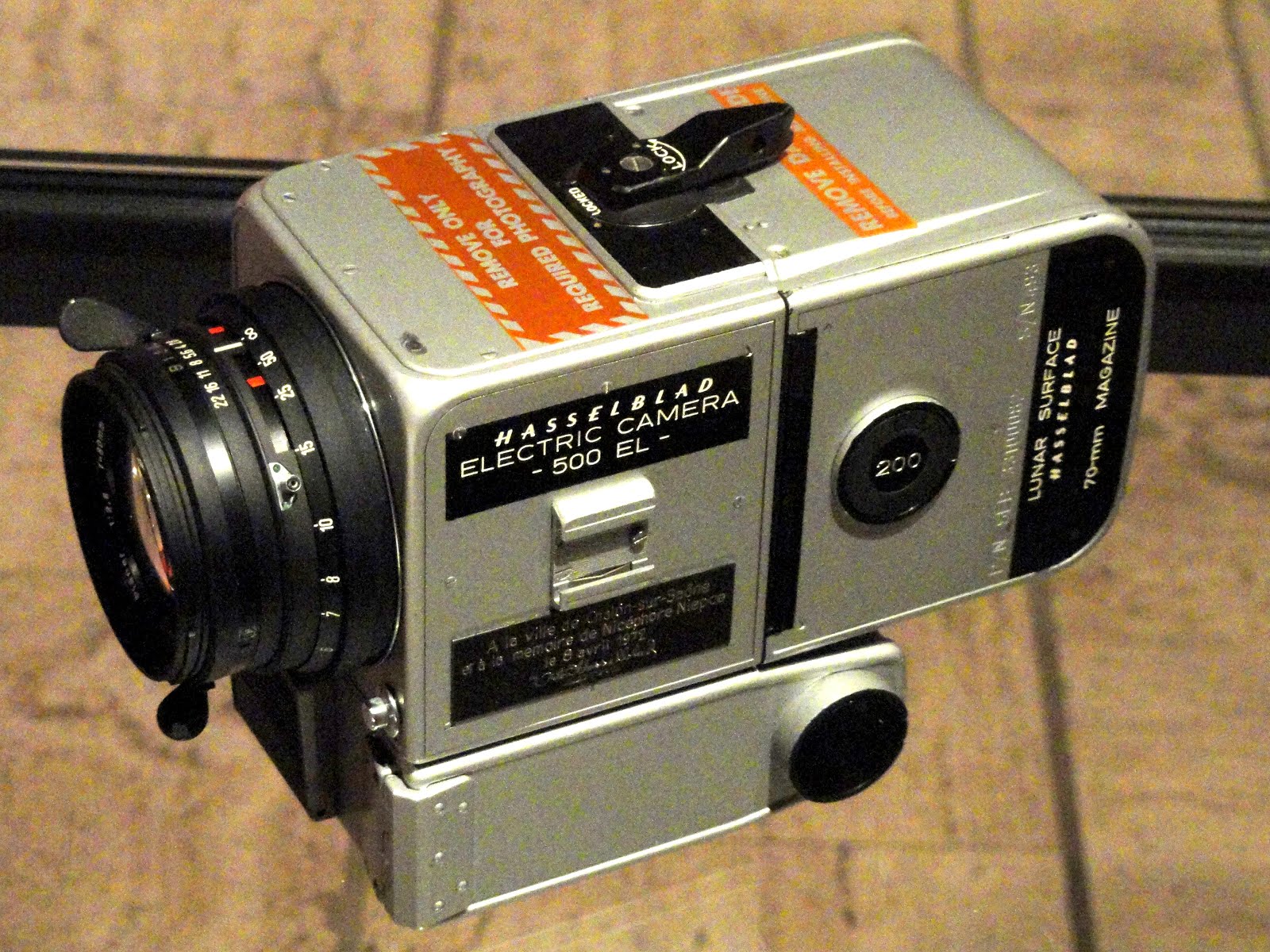 In addition, lunar photography didn’t use ordinary film, but a special 70 mm Kodak film engineered specifically for high-altitude reconnaissance applications, in which it had to deal with air temperatures as low as -40°C (104°F). This film had a custom-made thin polyester base (Estar), with a melting point of 254°C (490°F), and used an Ektachrome emulsion capable of providing adequate results over a wide temperature range.

Sometimes it is objected that chemical films have a narrow temperature range, so much that professional photographers are very careful to keep their films warm or cool as needed. But this is an optimum range, which yields the best possible colors: it doesn’t imply that the film will break or melt outside of this interval.

NEXT: 8.7 Wouldn’t sunlight outside on the Moon have burned or boiled the astronauts’ faces?