7.7 How come nobody sends probes to take pictures of the landing sites?

IN A NUTSHELL: Actually, several countries have done just that. India, China, Japan and the United States, have sent science probes to the Moon and have surveyed its entire surface, including the Apollo landing sites. Their images confirm that there are vehicles and science instruments exactly where NASA said it placed them.


THE DETAILS: Over the course of the decades since the Apollo crewed landings, the Moon has been visited and mapped in progressively greater detail by uncrewed probes sent by China, India, Japan and the United States. Some of these spacecraft are currently in operation in orbit around the Moon, sending fresh images and science data.

Many of these spacecraft carried telescopes and cameras, but these instruments were not powerful enough to show directly the vehicles left behind by the Apollo astronauts. However, they were able to acquire evidence of their presence. Three probes of three separate countries have photographed the differently-colored patch of lunar soil produced by the landing of Apollo 15. The Lunar Reconnaissance Orbiter was the first probe equipped with instruments that were capable of directly imaging in detail the Apollo vehicles.


The 1994 Clementine probe, launched by NASA, spent 71 days orbiting the Moon to map its surface at various wavelengths, from ultraviolet to near infrared, and with a laser altimeter. The images acquired by this probe included the one shown in Figure 7.7-1, which features a dark patch of differently reflective soil exactly where NASA said that Apollo 15’s LM had landed. This patch is compatible with the soil color changes expected as a consequence of the displacement of surface dust and the exposure of differently-colored underlying rock that would be caused by a spacecraft rocket motor. 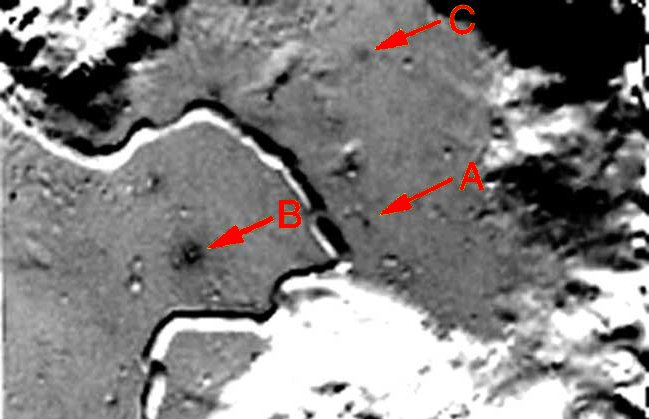 Figure 7.7-1. The dark patch marked by the letter A is located exactly where Apollo 15 landed. B and C are broader patches, probably caused by meteor impacts. This image was acquired using non-visible wavelengths and therefore the shades of gray do not necessarily match visible-light colors.


The Apollo 15 dust displacement was discovered in 2001 by Misha Kreslavsky of the department of geological sciences at Brown University (Rhode Island, United States) and by Yuri Shkuratov of the Kharkov Astronomical Observatory in Ukraine while they were studying lunar surface color changes produced by recent meteor impacts, which displace the soil.*


As it explored the Moon from orbit at an altitude of approximately 100 kilometers (62 miles), the Japanese probe Kaguya detected a differently-colored patch of lunar soil exactly where NASA said that Apollo 15 had landed (Figure  7.7-2). This finding, like Clementine’s, is compatible with the color changes expected due to dust displacement by a landing rocket motor. 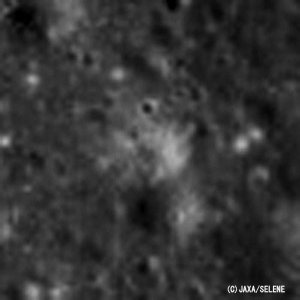 
The Kaguya probe also acquired very accurate terrain contour maps of the landing sites, which exactly match the terrain shown in the Apollo photos, as described in Chapter 3.


The Indian probe Chandrayaan-1 orbited around the Moon about 3400 times at an altitude of 100 kilometers (62 miles) to perform a chemical, mineralogical and geological survey. It carried scientific instruments from India, the United States, the United Kingdom, Germany, Sweden and Bulgaria.

Like Clementine and Kaguya, Chandrayaan-1 acquired images showing a brighter patch at the Apollo 15 landing site, but it did better than its predecessors: it detected a faint dot at the location of the descent stage of the Lunar Module (Figure 7.7-3). 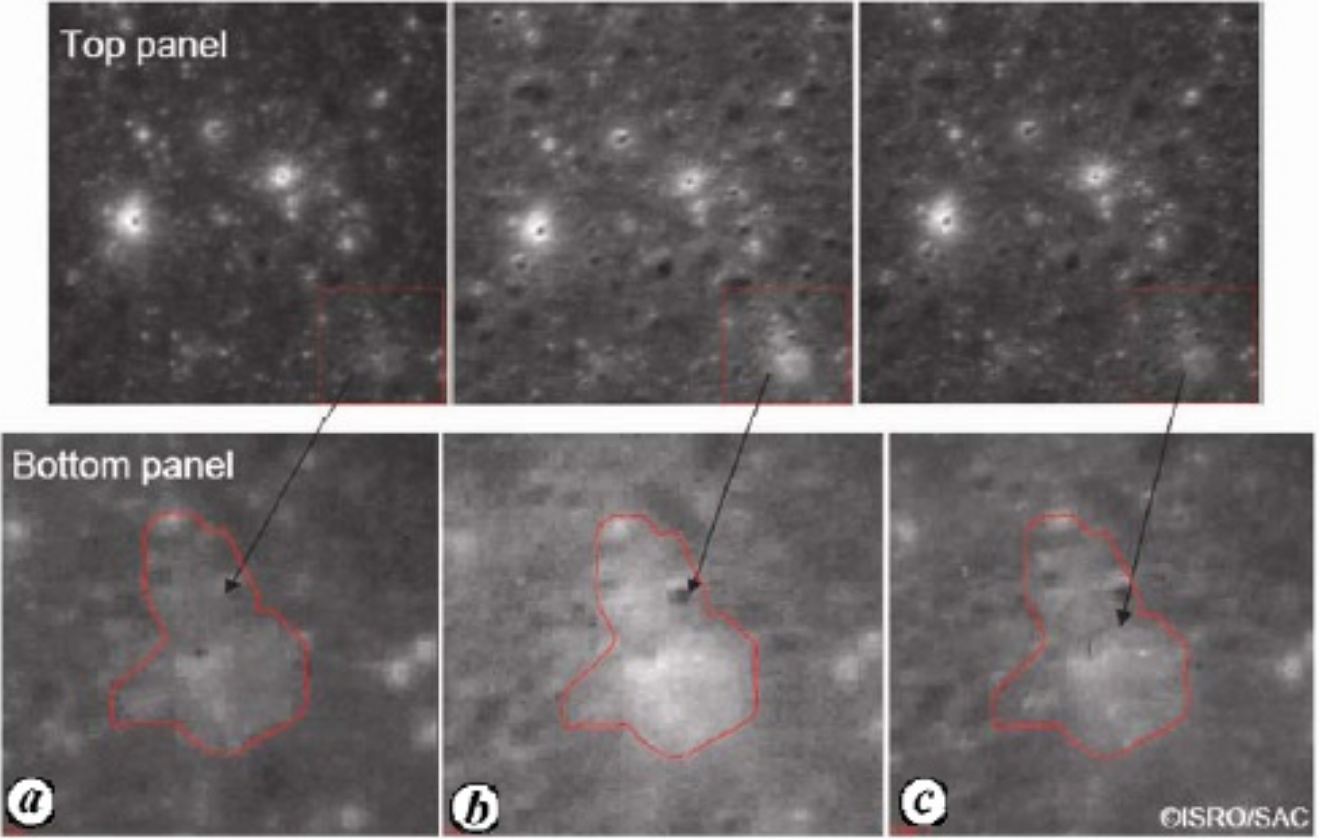 
The United States’ Lunar Reconnaissance Orbiter (LRO) probe was the first spacecraft equipped with instruments capable of directly imaging the Apollo vehicles left on the Moon. It achieved this result as part of its ongoing lunar mapping mission.

Its first images of the Apollo landing sites were published on 17 July 2009 and some of them are shown in Chapter 3. 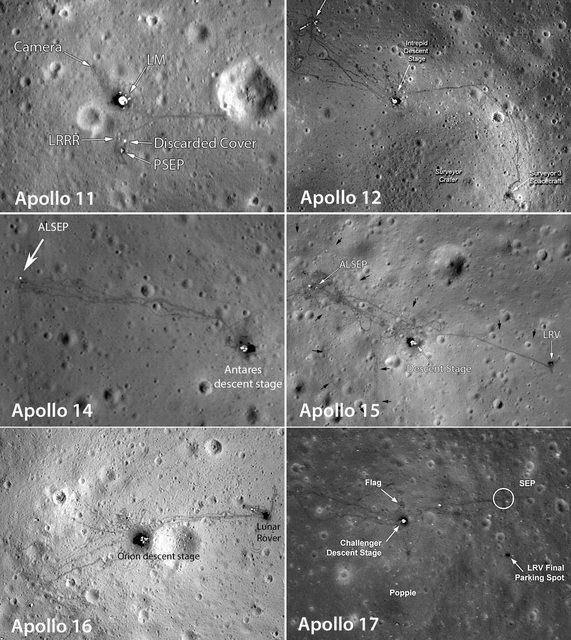 
China has sent several probes to the Moon. In 2010, its Chang’e-2 spacecraft mapped the Moon from an altitude which varied between 15 and 100 kilometers (9.3 and 62 miles), with a maximum resolution of 7 meters (23 feet). According to a statement made in 2012 by Yan Jun, chief application scientist of the Chinese lunar exploration program, Chang’e-2 “spotted traces of the previous Apollo mission in the images”. However, the imagery has not been released.


Images of Apollo hardware crash sites on the Moon


In addition to the actual landing sites, there are other traces of these missions on the Moon. The ascent stages of the Lunar Modules of Apollo 12, 14, 15, 16 and 17, and the third stages of Apollo 13, 14, 15, 16 and 17 were deliberately crashed on the Moon. Many of these crash sites have been imaged from orbit by the Lunar Reconnaissance Orbiter, showing patterns of debris that support NASA’s claims.* 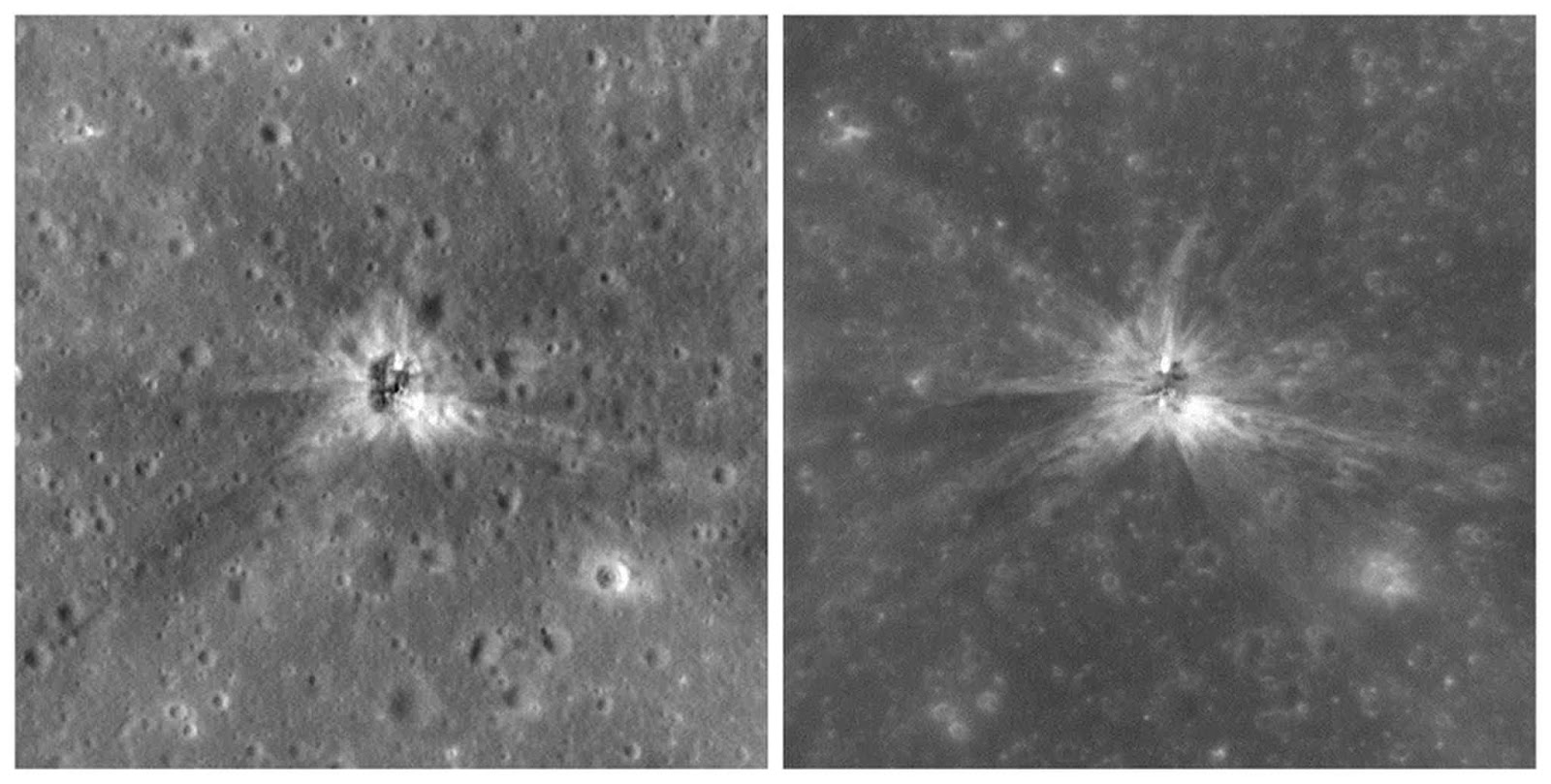 NEXT: 7.8 How could the large Moon buggy fit inside the small Lunar Module?