7.5 Why do a rendezvous in lunar orbit, which makes no sense?

IN A NUTSHELL: Actually, it does. Lunar rendezvous was chosen despite its dangers because it reduced drastically the fuel and payload requirements. It’s riskier than doing it in Earth orbit, or avoiding it completely by landing directly on the Moon with a single spacecraft instead of using a two-part vehicle, but these alternatives would have required a truly gigantic rocket, far bigger than the already massive Saturn V.


THE DETAILS: Some Moon hoax believers find it preposterous that NASA chose to perform intricate undockings, redockings and rendezvous between the Command Module and the Lunar Module, and to perform them near the Moon instead of in Earth orbit, which offered better chances of rescue if anything went wrong. Better still, why not follow the classic method featured in so many science fiction movies and land directly on the Moon with the main spacecraft, without using a separate lunar module?

Actually, NASA’s initial plan was indeed to land on the Moon with a single, large, tall spacecraft: a concept known as tailsitter, since it would land on its tail (Figure 7.5-1). 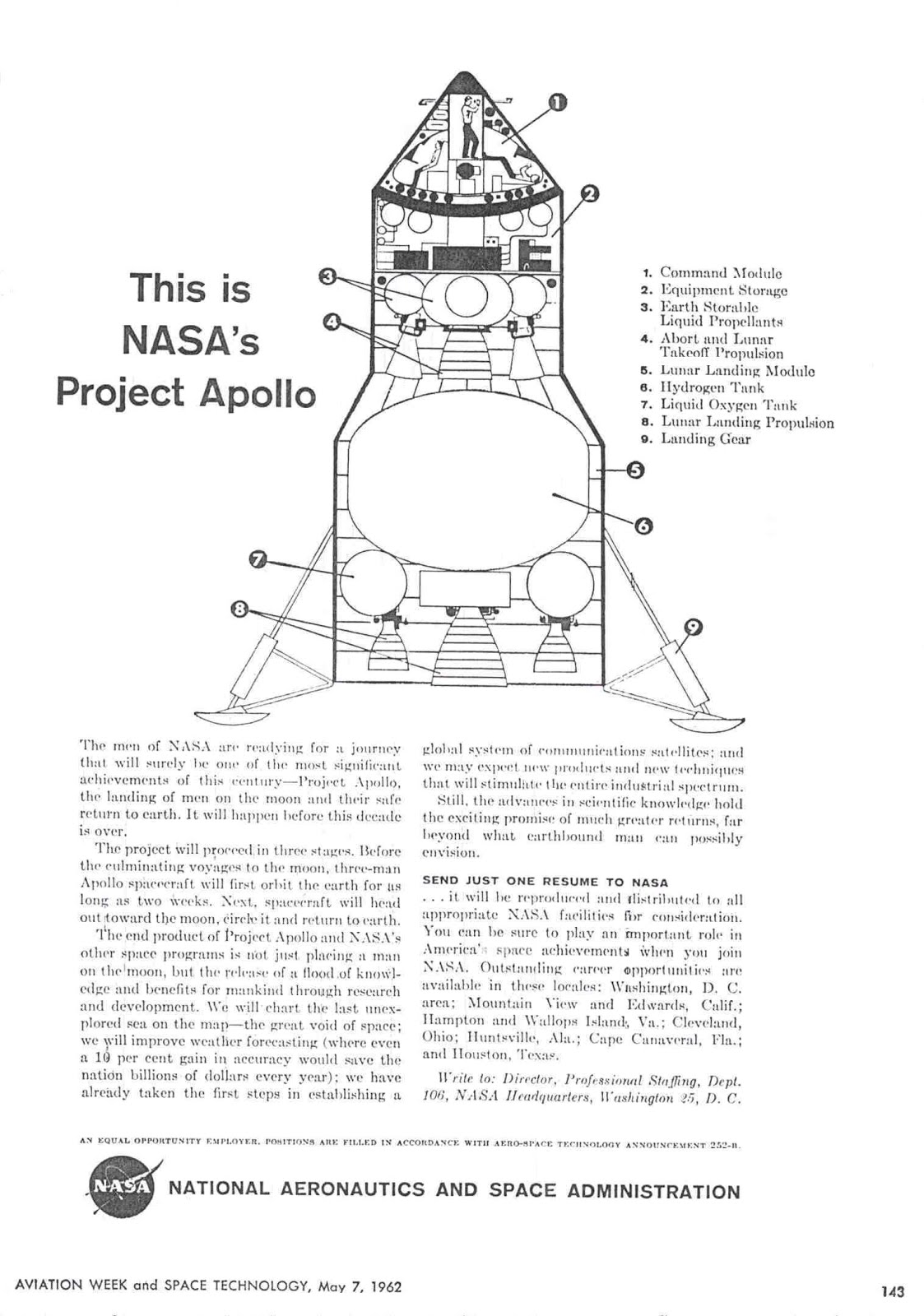 Figure 7.5-1. One configuration of thel tailsitter conceived initially as a lunar landing vehicle, in a NASA advert in the magazine Aviation Week and Space Technology, May 1962. Source: Sven Knudson, Ninfinger.org.


This solution had the advantage of requiring a relatively simple trajectory: a direct flight to the Moon (known as direct ascent), with no complicated maneuvers for docking and extracting a lunar module, no need for part of the crew to transfer to the landing module and no rendezvous in lunar orbit that might go wrong upon returning from the lunar surface. For all these reasons it was the favorite plan among the NASA engineers in charge of developing the various spacecraft for the Apollo project.

However, a tailsitter had some very substantial drawbacks: for example, the astronauts would be required to land a very tall and therefore unstable vehicle (it was approximately 20 meters, or 60 feet, tall in the version shown in Figure 7.5-1). They would also have to land it without being able to see the lunar surface below them, due to the bulk of the spacecraft below them. In some versions they would have to resort to a periscope and fly while lying on their backs.

Once they had landed, they would have to climb down from the top of the spacecraft; not an easy feat in a rigid and bulky spacesuit, with the additional danger of falling (a fall on the Moon can be as fatal as on Earth, despite the lower gravity). Getting back in and loading the rock samples would entail a hazardous climb.

The main objection to a tailsitter was the fact that landing on the Moon with the entire spacecraft used for the trip from Earth, instead of using a dedicated bare-bones vehicle, would increase the mass involved, and therefore the fuel required, leading to the need for a rocket that was even larger than the already gigantic Saturn V.

Taking all the mass of a tailsitter on a direct flight to the Moon would have required a colossal rocket, the Nova (Figure 7.5-2), which didn’t exist yet and could not be completed in time for President Kennedy’s deadline. The only booster that could be developed in time was the Saturn V, which was relatively smaller. 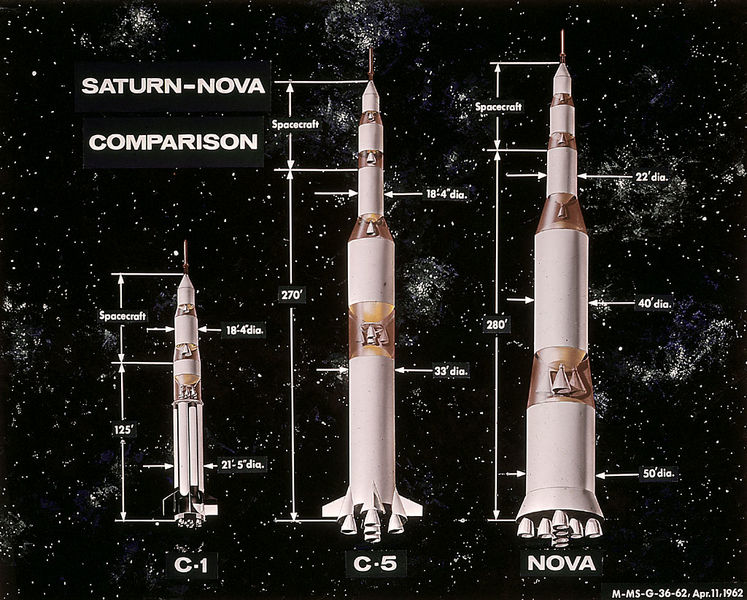 
Mission planners also considered using a first Saturn V to launch an uncrewed tailsitter spacecraft into Earth orbit, followed by a second Saturn with the fuel. This was known as Earth Orbit Rendezvous (EOR) and was NASA’s favored plan for some time. However, it entailed two closely coordinated launches and a dangerous and untested transfer of fuel in space. It also required landing on the Moon, and especially lifting off from the Moon, with no external help, a spacecraft as large as an Atlas rocket, which on Earth needed roughly three thousand people to prepare it for launch.

An alternative option was to split the tailsitter into two separate vehicles: the main one would remain in orbit around the Moon and the secondary one would be a stripped-down, specialized Moon lander.

This approach reduced weight and fuel requirements so much (by about three quarters) that it allowed to launch the entire mission with a single Saturn V rocket. However, the savings came at the cost of a risky rendezvous in lunar orbit (hence the name Lunar Orbit Rendezvous or LOR), which entailed certain death for the moonwalkers if it failed. A high-stakes gamble, in other words, but a perfectly logical one.

The lunar orbit rendezvous plan wasn’t new: it had been conceived in 1916 by Russian spaceflight theoretician Yuri Vasilievich Kondratyuk. Nevertheless, NASA was very reluctant to take this perilous and untested path, although preliminary studies on various methods, including LOR, had been ordered. The agency continued to believe that it had to try the tailsitter method. It should be remembered that at that time nobody had ever performed a rendezvous with docking in space, even in Earth orbit, and therefore the concept of performing a rendezvous while orbiting the Moon was extremely daring.

In 1961, a relatively low-ranking aerospace engineer at NASA, John Houbolt (1919-2014, Figure 7.5-3), vociferous supporter of the LOR method, skipped official channels and wrote an impassioned letter to NASA’s associate administrator, Robert C. Seamans Jr., noting that he was “a voice in the desert” in arguing for the convenience, and indeed the need, to resort to this solution in order to meet the end-of-decade deadline.

His initiative led to a review of the LOR concept, which however was not not backed by NASA senior managers. But Houbolt’s persistence paid off: in July 1962 the obsession of an unknown engineer became NASA’s final plan for getting to the Moon. 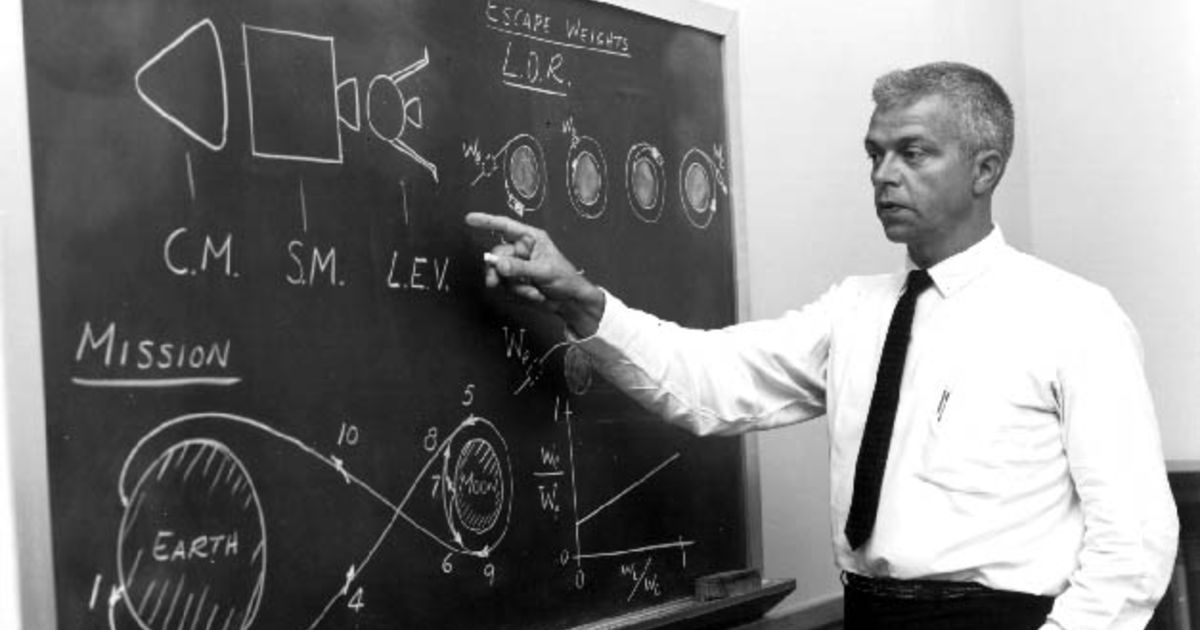 
John Houbolt’s crucial role in the success of the Apollo missions is often unknown to non-experts, but NASA celebrates him extensively. Here are some references if you want to know more about him:


NEXT: 7.6 Why don’t we just point a telescope at the landing sites?