7.16 Why is there no engine noise in the Moon landing audio?

IN A NUTSHELL: Because the astronauts’ microphones were very close to their mouths, so as to cut out background noise, and were designed to pick up only sounds at close range, just like aircraft pilot microphones or mobile phone microphones. Anyway, in a vacuum the rocket exhaust doesn’t interact with an atmosphere, which is what produces most of the familiar roaring noise.


THE DETAILS: Bill Kaysing, in Fox TV’s Conspiracy Theory: Did We Land on the Moon?, says that “the noise level of a rocket engine is up into the 140/150-decibel range. In other words, enormously loud. How would it be possible to hear astronauts’ voices against the background of a running rocket engine?” Indeed, the recordings of the astronauts’ communications during landing and liftoff, while the rocket engines are running, contain no engine noise.

In the Lunar Module, the astronauts stood extremely close to the descent engine and the ascent engine is literally inside the cabin; yet there is no sign of engine noise in their radio communications.

This apparently unusual fact is actually quite normal and occurs not only in the Apollo recordings, but also in Shuttle or Soyuz liftoff recordings. Moreover, when we take a plane and the captain makes a passenger announcement, his voice isn’t drowned out by the noise of the engines, even though the same noise is audible in the cabin.

The explanation is quite simple: the closeness of the microphones to the mouth allows the voice to cover any background engine noise. The microphones used for space flights, in aviation and in mobile phones are designed to cut out background noise in noisy environments by picking up only sound sources that are very close. Bill Anders (Apollo 8, Figure 7.16-1) reportedly called them “tonsil mikes” because he said that he had to shove them down his throat to make them work. This allowed the voice to drown out the roar of the engines – if there was any to begin with. Kaysing’s claim is in fact incorrect: the noise of a spacecraft engine is not always “enormously loud”. 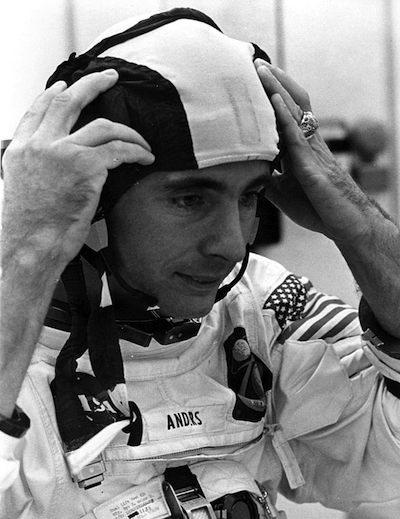 
When a rocket engine operates in vacuum, its exhaust expands without encountering any obstacle: it doesn’t collide at supersonic speed with an atmosphere and therefore it doesn’t generate the shockwaves that instead cause the loud noise that is heard on the ground when a large rocket is launched.

Both Apollo astronauts and current spacecraft crews report that when they are in space, sometimes they hear a bang at the moment of ignition, before combustion stabilizes, and they feel occasionally intense vibration; but apart from this, they say that the engines are noiseless. It seems unlikely that they’re all lying.

NEXT: 7.17 How could a Lunar Module made of tinfoil withstand temperature extremes so well?