6.4 Who stayed behind to shoot the liftoff from the Moon?

IN A NUTSHELL: Nobody. The footage of the liftoff of the Lunar Module from the Moon was shot using an independently powered TV camera that was radio controlled from Earth.


THE DETAILS: The visual record of the Apollo missions includes footage of the liftoff of the Lunar Module from the Moon. Some conspiracy theorists and doubters argue that this video must be fake, since there was nobody left on the Moon to take the pictures and even move the camera to follow the ascent stage of the Lunar Module as it climbed into the sky.


The answer is simple, if you take the time to read the technical documents of the Apollo missions: the lunar liftoff was shot only during Apollo 15, 16 and 17, when the TV camera was installed on the Rover (the astronauts' electric car), which at the end of the excursion was parked approximately 90 meters (300 feet) east of the Lunar Module for the very purpose of recording the liftoff of the LM.

The camera equipment was powered by the batteries of the Rover and was controlled remotely by an operator on Earth through a radio link. Indeed, its technical name was GCTA, which stands for Ground Controlled Television Assembly. 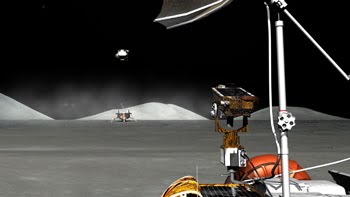 Figure 6.4-2. Graphic reconstruction of how the LM liftoff videos were shot. From the documentary Live from the Moon (Spacecraft Films).


The signal from the TV camera left on the Moon was transmitted directly to Earth through the parabolic antenna installed on the Rover, using the same method used to transmit the astronauts' moonwalks. At the time, video recording equipment was very bulky and heavy and therefore the lunar camera was not equipped to record. The liftoff had to be relayed to Earth live. Moreover, the shot had to be carefully planned beforehand.

The radio control signals in fact took about two seconds to travel from the control center in Houston to the transmitters located at various sites on Earth and from there to the Moon at the speed of light. This two-second delay made it impossible to correct the camera movements in real time: any command would reach the camera too late. Accordingly, NASA had to calculate in advance a very precise placement of the TV camera and send all commands two seconds earlier in order to have the camera tilt up and follow the ascending lunar module at the right time.

For the Apollo 15 liftoff, the camera did not tilt to follow the spacecraft, due to a malfunction of one of its motors. For Apollo 16, the camera operator, Ed Fendell, tried to follow the ascent, but was unable to do so because the Rover had not been placed correctly by the astronauts at the exact preplanned distance required to achieve the shot.

The Apollo 17 liftoff shot was achieved almost perfectly and managed to keep the spacecraft in frame as it departed.


Figure 6.4-3. Ed Fendell, the remote-controlled TV camera operator, explains the details of how the liftoff shots were achieved.


Incidentally, since the entire system was powered independently by batteries, it was able to transmit even after the astronauts had left the Moon, sending back lonely images of the moonscape, once again devoid of life and motion after humankind's brief visit.

NEXT: 6.5 Were the astronauts lifted by wires when they fell?