6.2 Why does the flag flutter on the airless Moon?

IN A NUTSHELL: It's not fluttering: it's swinging, and it only does so when the astronauts handle it or touch it, or when it is struck by the blast of the lunar module’s maneuvering rockets or by the air vented from the hatch. Moreover, the way it swings is different from how a flag swings on Earth and actually proves that the footage had to be shot in a vacuum.


THE DETAILS: In the TV and film footage of the lunar landings, the American flag sometimes moves as if it had been blown by a sudden gust of air. That, it is argued, is impossible on the airless Moon; therefore, according to conspiracy theorists, this proves that the moonwalk footage was faked in a movie studio.

One might ask why the movie set used for the most important and complex fakery of the twentieth century would be so ridiculously shoddy as to have drafts, or why the people in charge of the hoax would be so pathetically dumb as to leave such glaring and revealing mistakes in the final product, but never mind. There's a simple and rather interesting explanation for the apparently strange behavior of the flag.

If you examine the Apollo footage, you find that when the flag “flutters” it continues to oscillate stiffly and unnaturally for quite a while, differently from a flag on Earth, which changes shape and comes to a standstill almost immediately. This unusual and persistent oscillation is possible because the flag is moving in an airless environment, without encountering any air resistance. If you compare the Apollo videos with footage of a flag moving on Earth, the difference in behavior is very obvious.

In 2008 the TV show Mythbusters put this to the test. An accurate replica of an Apollo flag was placed in a large vacuum chamber and its pole was turned, just like the astronauts did on the Moon. The same turning motion was applied while the chamber was filled with air and after the air had been extracted to produce a vacuum. The difference was quite evident: when the flag was in vacuum, it swung for much longer and in the drag-free way seen in the Apollo television record.


In other words, the anomalous motion of the lunar flags doesn't confirm the hoax theories: on the contrary, it confirms that the footage of the moonwalks was shot in a vacuum.

Careful examination of the lunar footage, cross-checking it with mission timelines, also shows that the flag “waves” only in very specific circumstances.

For example, the flag moves when an astronaut turns its pole to drive it into the ground (Figure 6.2-2). After the flag has been erected and left to settle, it doesn't move. Even its creases and wrinkles remain unchanged throughout the excursion, as discussed in Section 5.3 for the Apollo 11 flag. 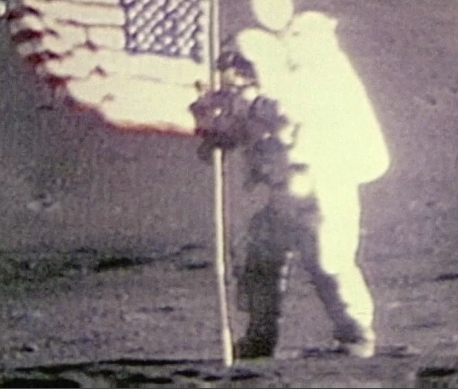 Figure 6.2-2. Flag oscillation in an Apollo TV transmission while an astronaut drives its pole into the soil.


In the video footage of Apollo 14, the flag oscillates repeatedly, entering the frame and exiting it, without being touched by anyone. At this point in the mission timeline, the astronauts are inside the lunar module.


The technical explanation suggested for this slight motion is the gradual venting of the lunar module cabin air. The flutter in fact occurs while the astronauts are getting ready for their second moonwalk and this means that they have to vent all the air inside the cabin. This venting occurred through a valve located on the lunar module hatch, which faces the flag.

Such venting of a large volume of air into a vacuum, therefore without the pressure and resistance of an atmosphere, would create a swiftly expanding cloud of air, which would strike the flag gently but with enough force to make it swing, especially since the flag is not hindered by air resistance. It would have a nonzero pressure on one side and zero pressure on the opposite side, so some motion would be inevitable.


There’s a moment in the Apollo 15 footage, at 148:57:15 in mission elapsed time, in which the flag swings stiffly, with the typical oscillation that occurs in a vacuum, although apparently it has not been touched by astronaut Dave Scott as he passes in front of it (Figure 6.2-4).


At first glance, it does indeed look as if Scott’s movement displaced some air which impinged on the flag. But before arguing that this is unquestionable evidence of fakery, other non-conspiratorial explanations should be considered. Experts have been intrigued by this phenomenon and have discussed it at length in the Apollo Lunar Surface Journal (EVA-2 Closeout, at 148:57:15).

For example, the apparently mysterious motion may have been due to actual contact between Scott’s left arm and the flag. Due to the wide-angle setting of the camera lens, which exaggerates depth, Scott appears to be farther away from the flag than he actually is. This would explain the fact that only the lower portion of the flag moves (Figure 6.2-5).


Another possible explanation is an electrostatic effect. As Scott walked on the lunar surface (which has a significant electrical charge of its own due to the ionizing effect of ultraviolet radiation and particles from the Sun), he may have accumulated a charge which attracted or repelled the flag in the same way that a plastic rod rubbed on a wool sweater attracts or repels hair or pieces of paper.

Since the almost-perfect vacuum close to the lunar surface is highly dielectric (i.e., essentially incapable of conducting electric currents), charge accumulation is easier than on Earth. Moreover, any attraction or repulsion of the flag is more conspicuous on the Moon than on Earth because on the Moon there's no air to slow the flag.

Another conceivable scenario is that the discharge from the astronaut's backpack sublimator might have created a momentary puff of gas that impinged on the flag. This would explain the fact that only the bottom corner of the flag moves.

Whatever the actual cause is, it can’t be an air displacement on a movie set, because the same video sequence shows that the dust kicked by the astronaut’s boots doesn’t swirl, but falls sharply and neatly in an arc. This is typical of a vacuum and is not possible in air. The flag’s slow and long-lasting oscillation is also consistent with a low-gravity vacuum environment.

NEXT: 6.3 Who was already outside to televise Armstrong’s first steps?