5.31 Why is there a man in a waistcoat in a photo taken on the Moon?

IN A NUTSHELL: It’s not a man in a waistcoat: it’s astronaut Harrison Schmitt, wearing a spacesuit. His image is distorted by being reflected in Gene Cernan’s curved visor.


THE DETAILS: It is claimed that one of the Apollo photographs shows a long-haired man in a waistcoat standing on what appears to be the surface of the Moon. This claim was reported by British tabloid The Mirror and by many other news sources in 2017.* 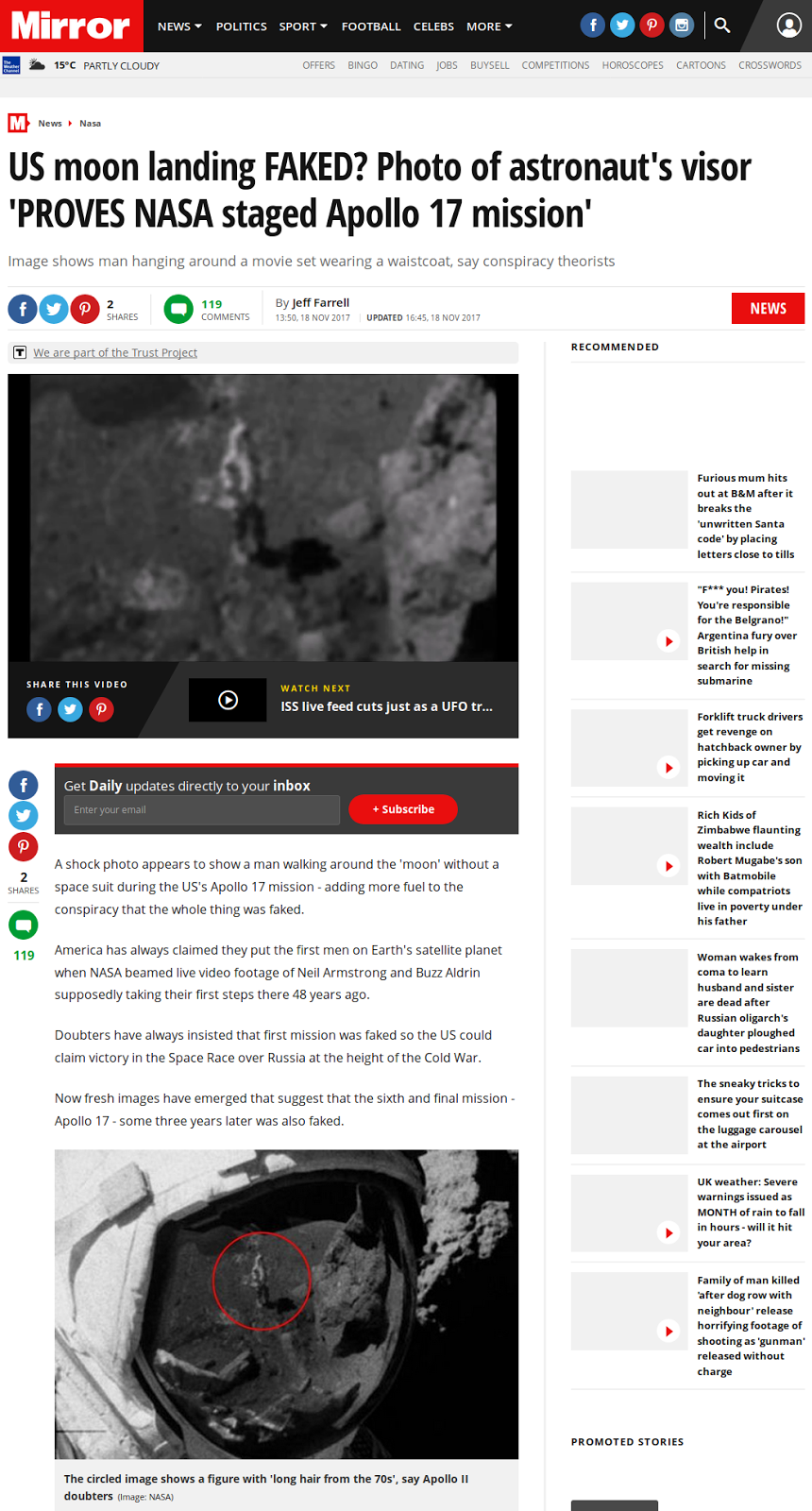 
The Mirror reports this as a “shock photo” that “appears to show a man walking around the 'moon' without a space suit during the US's Apollo 17 mission [...] [A] close-up analysis of one supposed image from the famous expedition that emerged this week suggests the whole enterprise was filmed on a Hollywood movie set.”

The source of this discovery is, according to The Mirror, a Youtube user known as Streetcap1, who reportedly claims that "It looks like a man. Back in the early 70s. Long hair. Wearing some sort of waistcoat type thing.”

As always, one has to wonder why the hypothetical conspirators would be so colossally clumsy as to leave a picture of a man without a spacesuit in the Apollo photographs.

The detail of the alleged “man in a waistcoat” shown by the tabloid is in Figure 5.31-2. 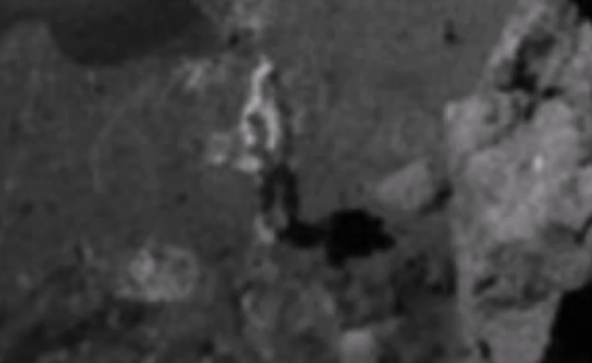 
The original Apollo 17 photograph from which this detail is taken is AS17-141-21608 (Figure 5.31-3). The Apollo Lunar Surface Journal and the NASA description of this photo report that it was taken at 165:17:01 of mission elapsed time, during the third EVA, by astronaut Harrison Schmitt and shows his crewmate Gene Cernan. 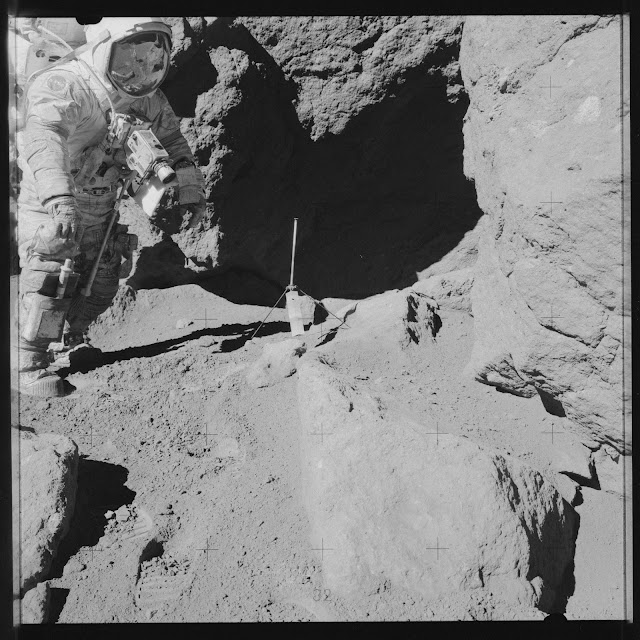 
The alleged long-haired man can be glimpsed in the top left corner of the photograph, in the reflection of Cernan’s gold visor. It’s a very small and blurry detail, even in the best scans available online (Figure 5.31-4, Flickr; Nasa.gov; Archive.org), so it takes quite a lot of imagination to see a “waistcoat” or “long hair”. 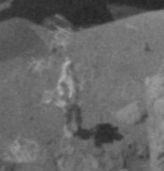 
Comparing the Mirror and NASA versions of this detail reveals that the tabloid’s picture has been processed to enhance its contrast, and this always produces digital artifacts, i.e., apparent details that didn’t actually exist in the original subject.

In the unprocessed NASA version, the person no longer appears to be wearing a waistcoat: the two dark bands on his body are, somewhat more plausibly, the shadow of his arm and of his upper body. The alleged long hair is simply the suit helmet.

The person’s shadow, moreover, is too oddly shaped to belong to someone who is not wearing a spacesuit; its shape makes sense, however, if the person is wearing a large backpack, such as the portable life support system (PLSS) carried by Apollo astronauts.

There’s another important detail: the person is reflected exactly in the part of the surface of the spherical visor that is at right angles to the observer, as can be seen in Figure 5.31-5. 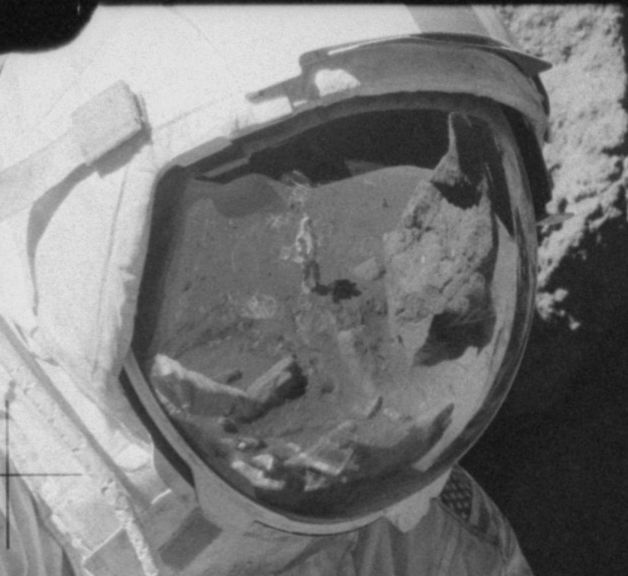 
This is possible only if the person is taking the photograph. If you try to take a picture of a curved reflective surface, such as a road mirror or theft prevention mirror in a shop, you inevitably end up being reflected in the region where the surface is perpendicular to you.

The most logical explanation, therefore, is that the person is simply Harrison Schmitt, the other astronaut who was on the Moon with Cernan and took the photograph.

Incidentally, this claim had already been made and debunked at least as far back as 2010 (Figure 5.31-6).

NEXT: 5.32 How come famous photographers claim that the Apollo photos are fake?