5.2 Why are there no stars in the photographs?

IN A NUTSHELL: Because there shouldn’t be any. The surface of the Moon at the landing site was in daylight, so the cameras were set for daylight. Stars are too faint to be photographed with daylight settings. The same thing also happens in Russian and Chinese photos taken on the Moon and in space with these settings. Only Venus shines brightly enough to be photographed, but it’s a planet, not a star, and it’s far brighter than actual stars.


THE DETAILS: This is usually the very first objection raised by doubters: why aren’t there any stars in the Apollo photographs? After all, illustrations and movies that depict the Moon often show the stars in the sky.

However, this is an artistic license. Adding stars makes a picture much more interesting, but it’s scientifically inaccurate. In actual fact, the sky is starless in all photographs ever taken in space in sunlight with normal daylight settings.

There are no stars in pre-Apollo pictures, such as the one shown below (Figure 5.2-1), which was taken in 1965 in Earth orbit during the Gemini 4 mission. 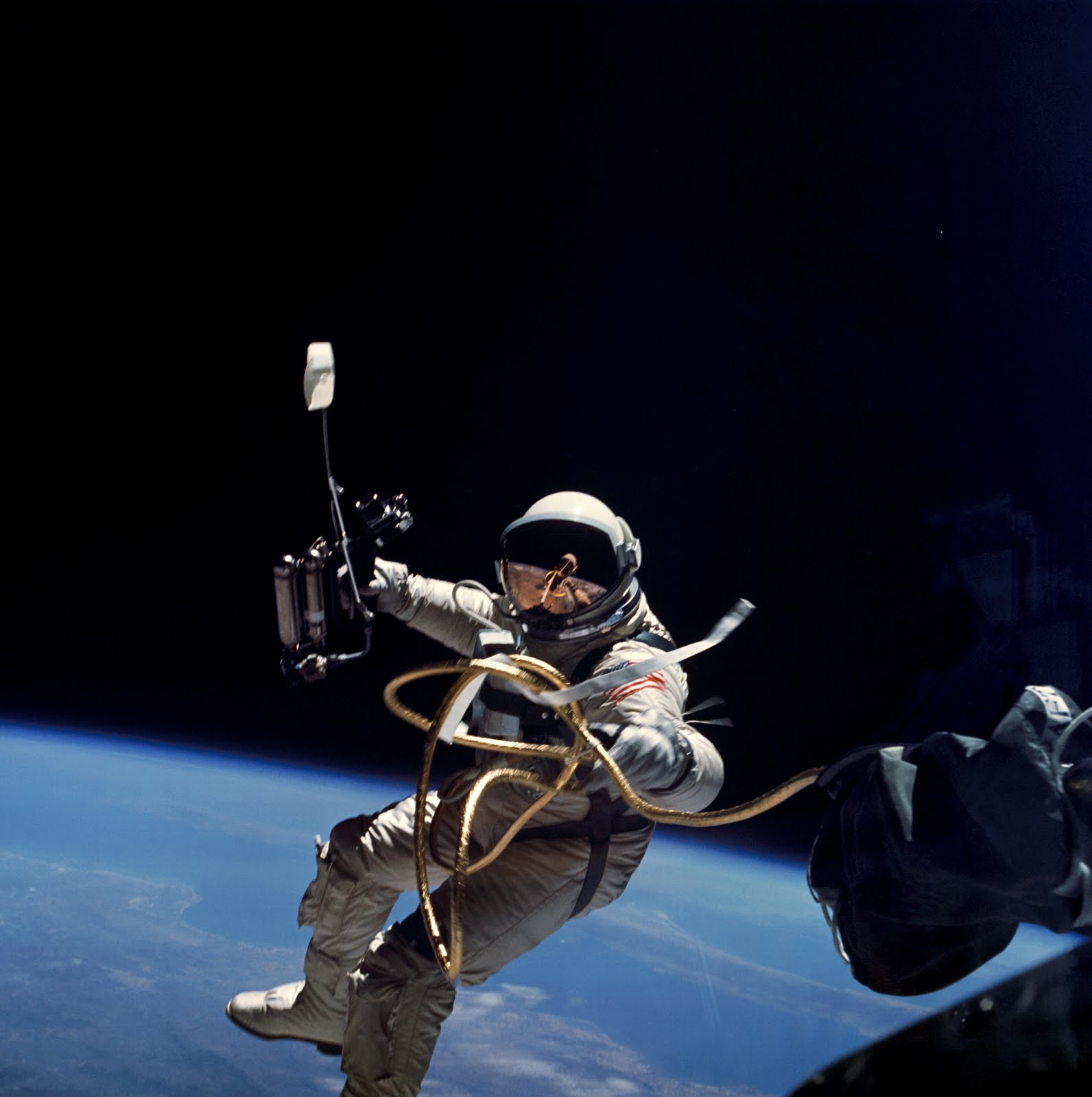 
There are also no stars in more recent daylight space photographs, such as the ones taken by the astronauts of many countries who flew on the US Space Shuttle or on the Russian Soyuz spacecraft (Figure 5.2-2). Figure 5.2-2. Swiss astronaut Claude Nicollier against the blackness of space during Shuttle mission STS-103 (1999). No stars.


There are no stars in the daylight photos taken from the International Space Station (Figure 5.2-3). 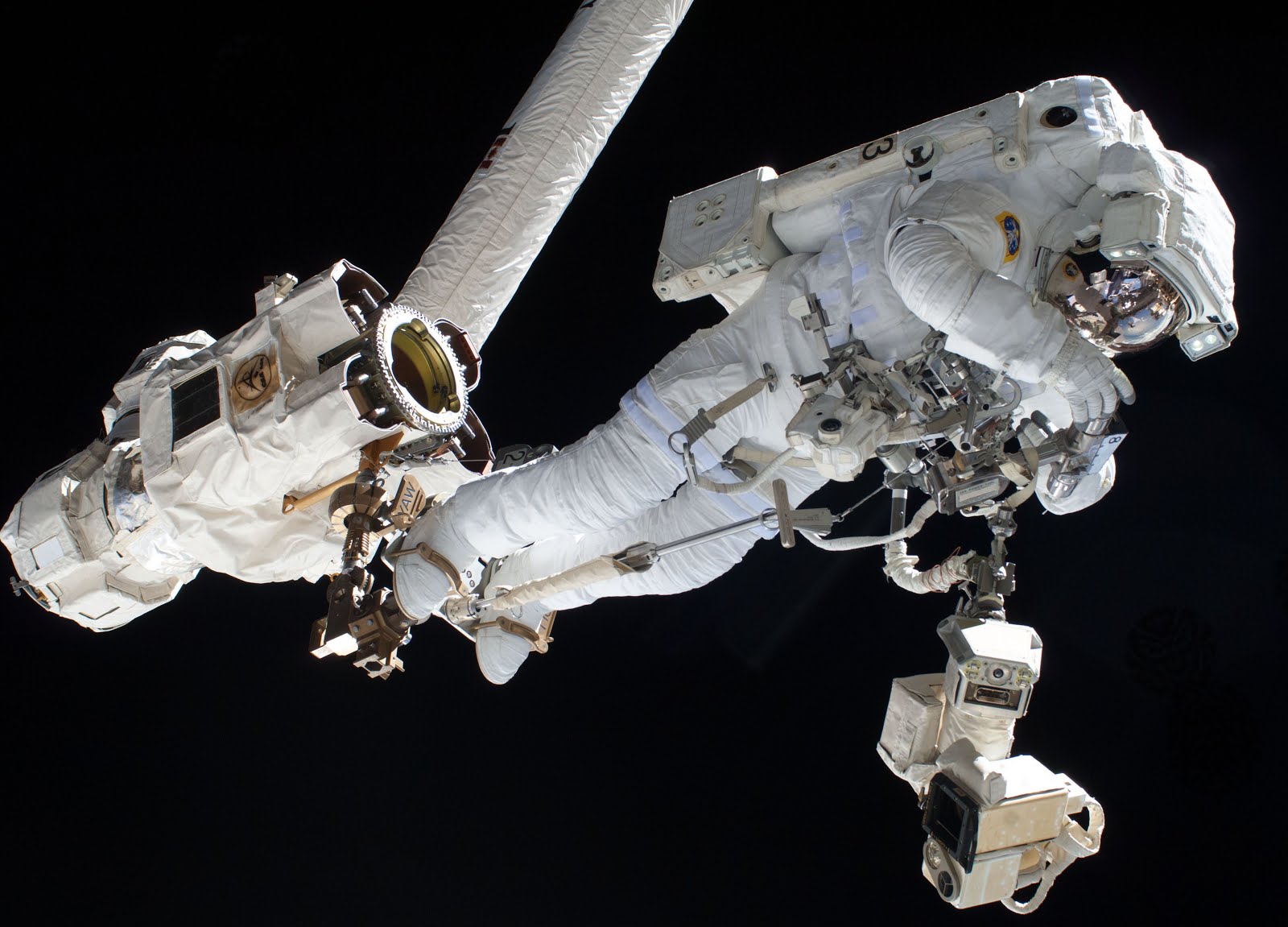 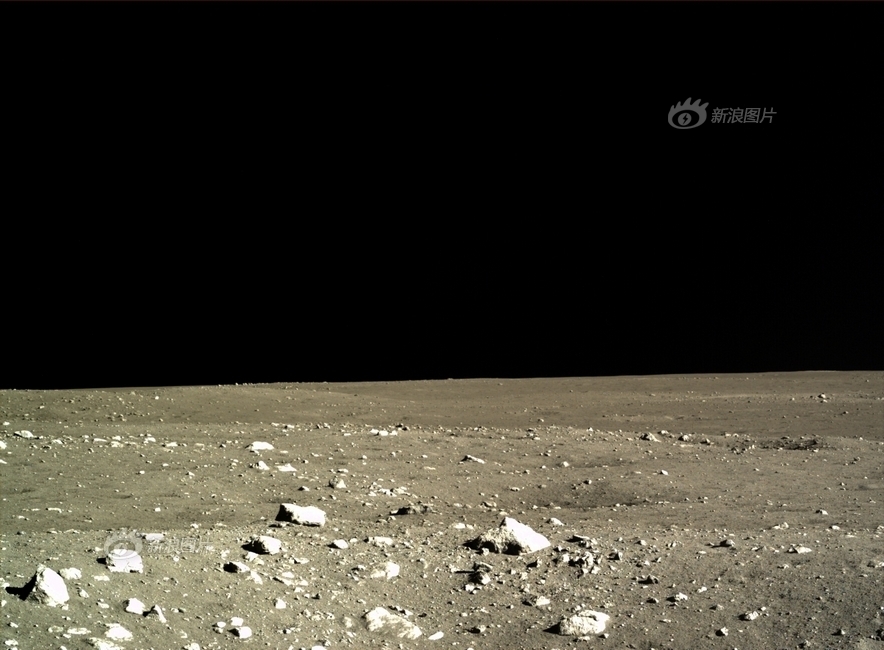 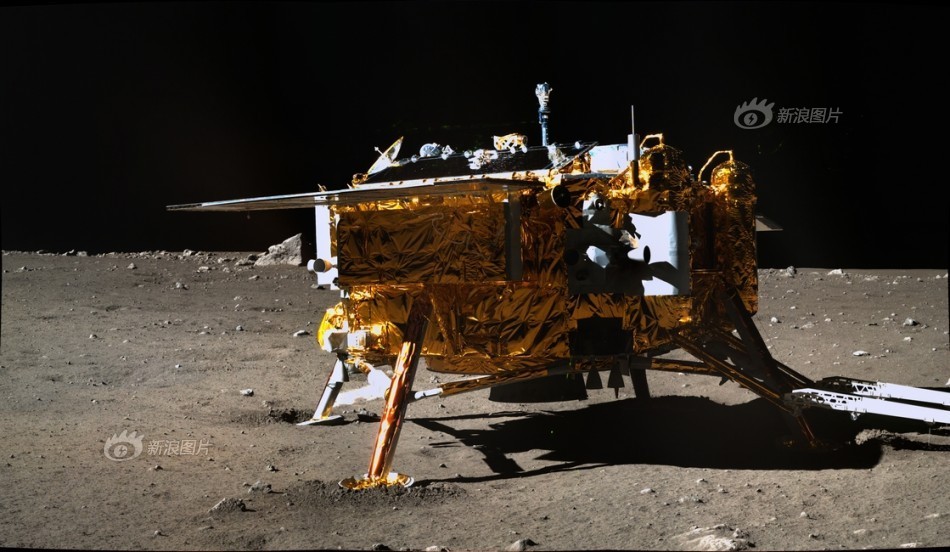 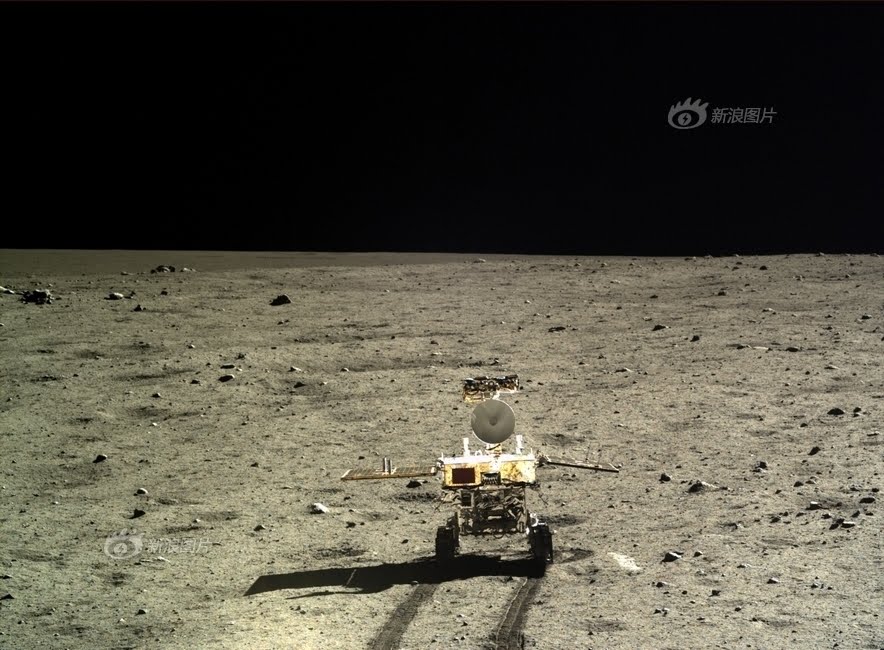 These international examples make it clear that the lack of stars in photographs taken in space and on the Moon is absolutely normal.

The reason is very simple: stars are far too faint to be recorded by a camera set for daylight photography like the Moon cameras were. You can test this easily: take a photograph in daylight with a camera that allows manual settings and make a note of the exposure time and aperture (the number after the “f/”) that yield a good picture. Then try taking a photograph of a clear night sky with the same settings. The sky will turn out pitch black, except for the Moon and possibly Venus.

The astronauts couldn’t see any stars while they were on the Moon for the same reason. If you stand in a city street at night, your eyes are dazzled by car headlights and street lighting, so you’ll have trouble seeing any stars. Imagine how dazzled the moonwalkers were by the entire lunar surface all around them bathed in direct sunlight. If you’ve noticed how bright a full Moon is and how it blocks out the stars in the night sky, just think how bright it must be when you’re actually standing on that Moon.

This is a basic concept of photography and optics, so those who question the lack of stars in the Apollo visual record are simply revealing their lack of technical knowledge. That’s what prominent Moon hoax theorist Bill Kaysing did when he asked “Where are the stars in the lunar sky?” in his book We Never Went to the Moon (page 23).

Faint starlight can be photographed by adjusting cameras to night settings. This is what astronauts do today to take pictures of the stars from the International Space Station with their highly sensitive digital cameras when the Station flies over the night side of the Earth.

Beautiful pictures such as the one shown in Figure 5.2-7 can be taken only by choosing a long exposure time (1/6th of a second), the greatest possible aperture (f/1.4) and a very high sensitivity (12800 ISO). The photographs taken by the astronauts on the Moon, instead, were set to 1/250th of a second, an aperture of f/5.6 or f/11 and a sensitivity between 64 and 160 ISO. 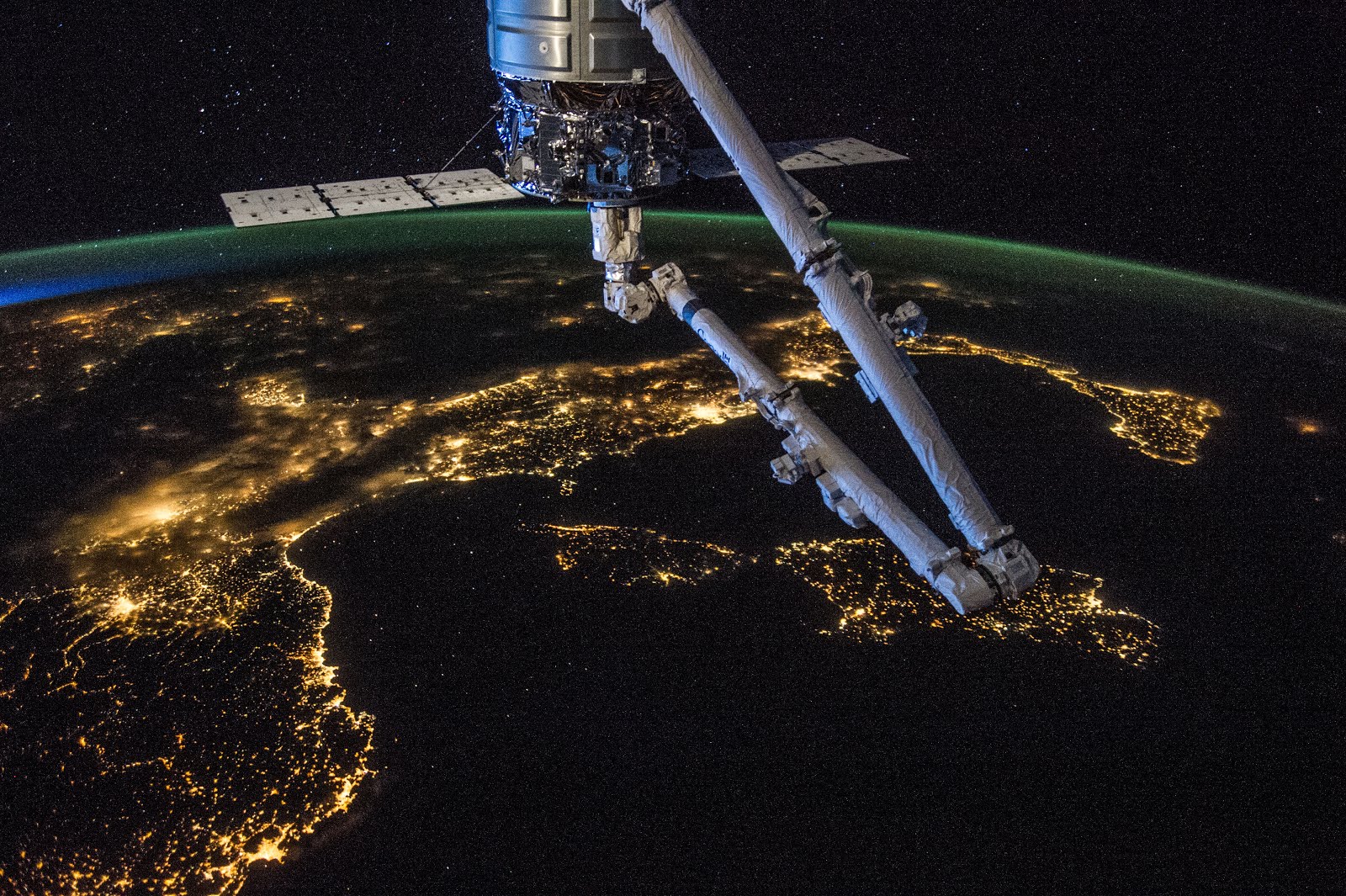 Figure 5.2-7. Italy by night, seen from the International Space Station. One of the Station’s robot arms is at the center and is gripping a Cygnus cargo vehicle. The stars can be seen because the camera is set for night photography. The dots of light in the sea are ships. Source: NASA, 2014.


However, it is incorrect to say that there are no stars at all in any of the pictures taken on the Moon during the Apollo missions. For example, photograph AS16-123-19657 (Figure 5.2-8) shows the stars of Capricorn and Aquarius as a backdrop to the Earth. However, it wasn’t taken on the Moon with an ordinary camera, but with a telescope loaded with ultraviolet-sensitive film, using night settings (a long exposure time), during the Apollo 16 mission in April 1972, taking care not to include the extremely bright lunar surroundings.


The Apollo visual record also includes pictures of other heavenly bodies, although strictly speaking they’re not stars. For example, NASA photos AS16-117-18815, -18816 and -18817 (Apollo 16), taken with daylight settings, faintly show Venus, which is a planet, not a star, and is far brighter than any actual star, so much that you can see it in broad daylight on Earth if you know where to look.

Can you spot Venus in these photographs? You may have to click them in order to enlarge them. Venus is just above the rightmost hill in Figure 5.2-9. 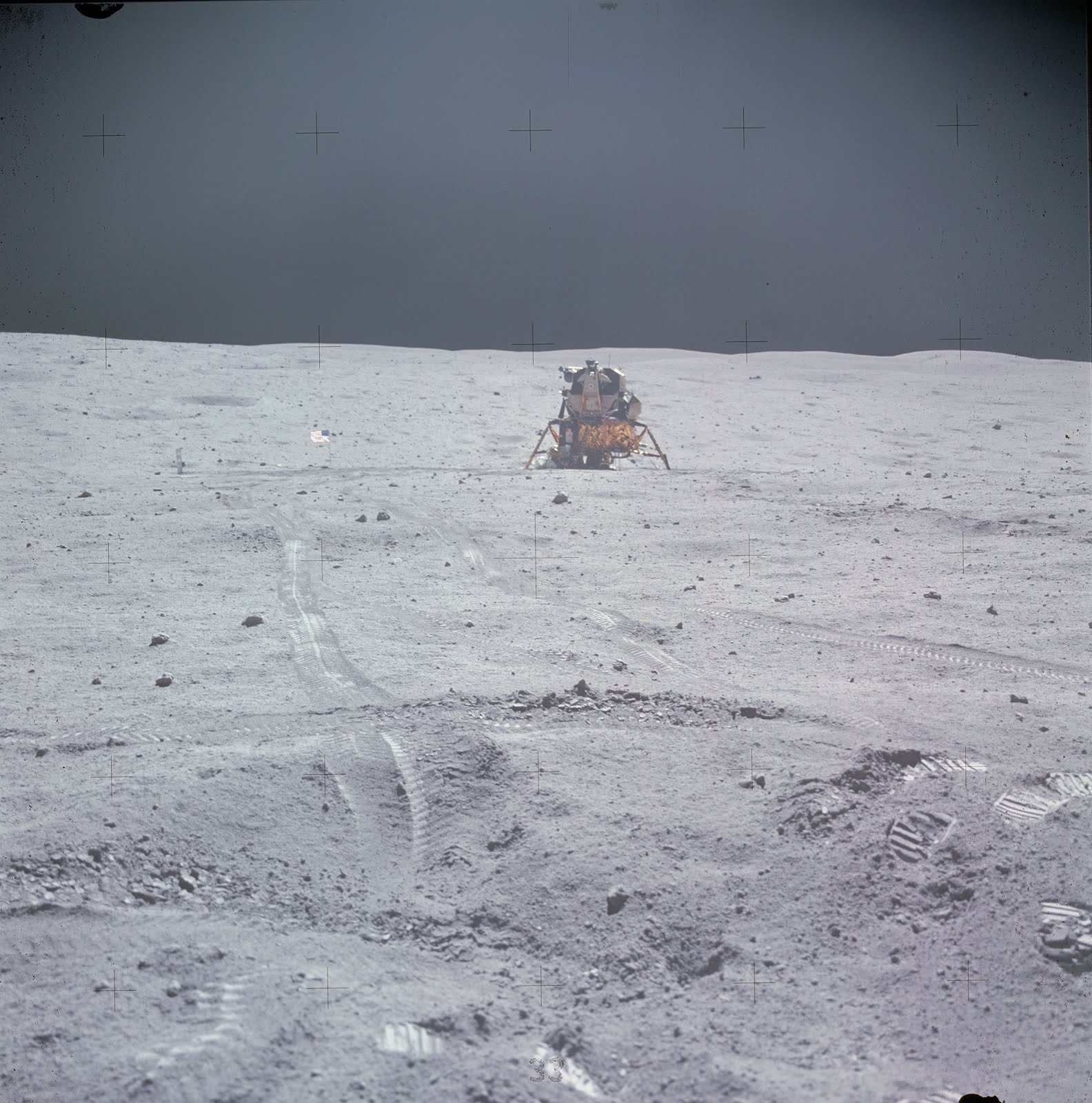 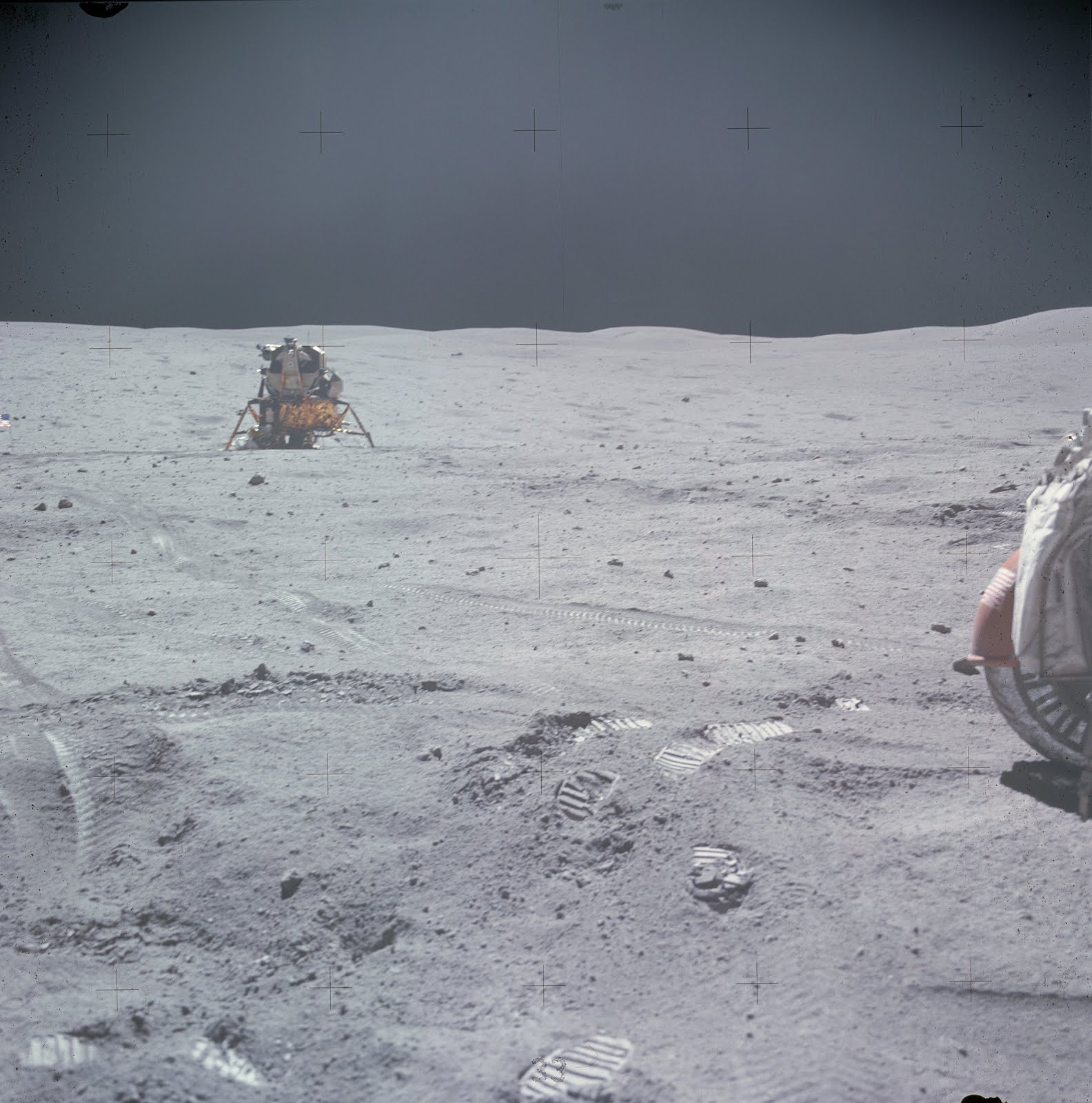 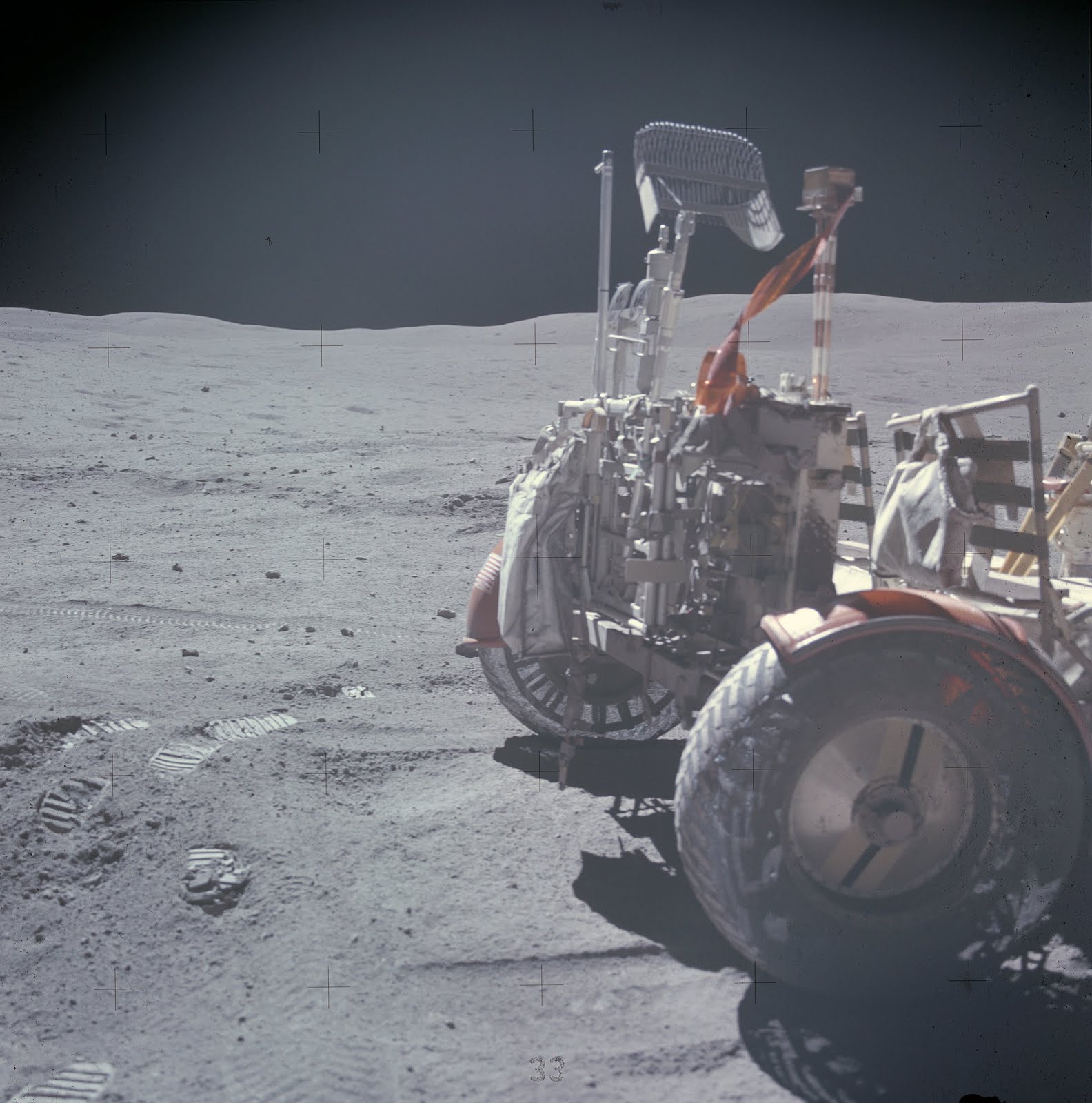 
Perhaps it’s easier to locate Venus in the version of Figure 5.2-9 shown in Figure 5.2-12, in which contrast has been boosted and an arrow and an enlarged detail have been added. 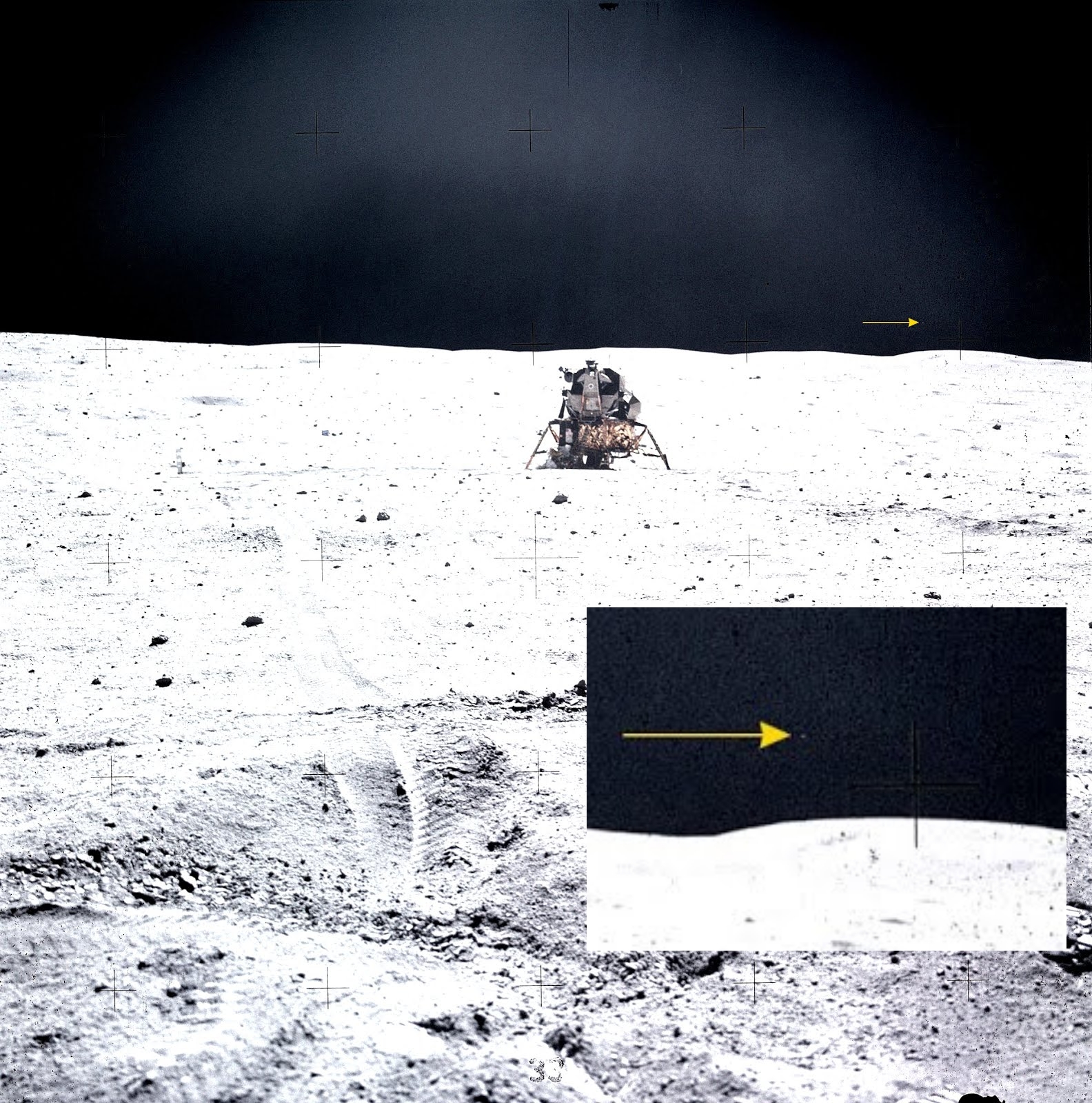 
We know this is not a film defect because it appears in the same region of the sky in all three photographs and because astronomers have calculated that at the time when these picture were taken (23 April 1972 at 19:04 GMT/UTC) Venus indeed would have been visible from the Apollo landing site exactly in that position and direction.

Venus can also be spotted in some pictures taken by Alan Shepard during Apollo 14: it’s that faint dot to the right of the lunar module antenna (Figures 5.2-13 and 5.2-14). 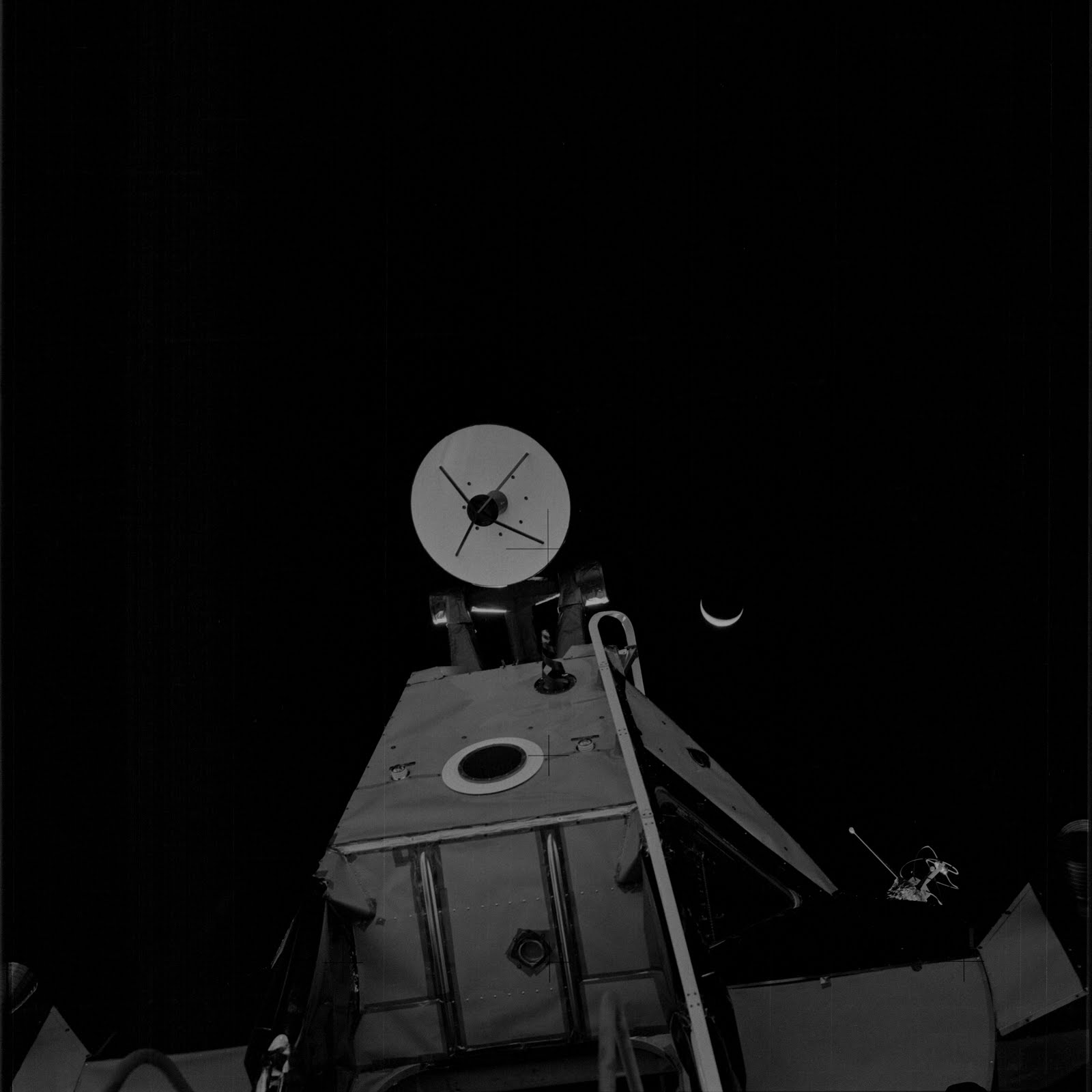 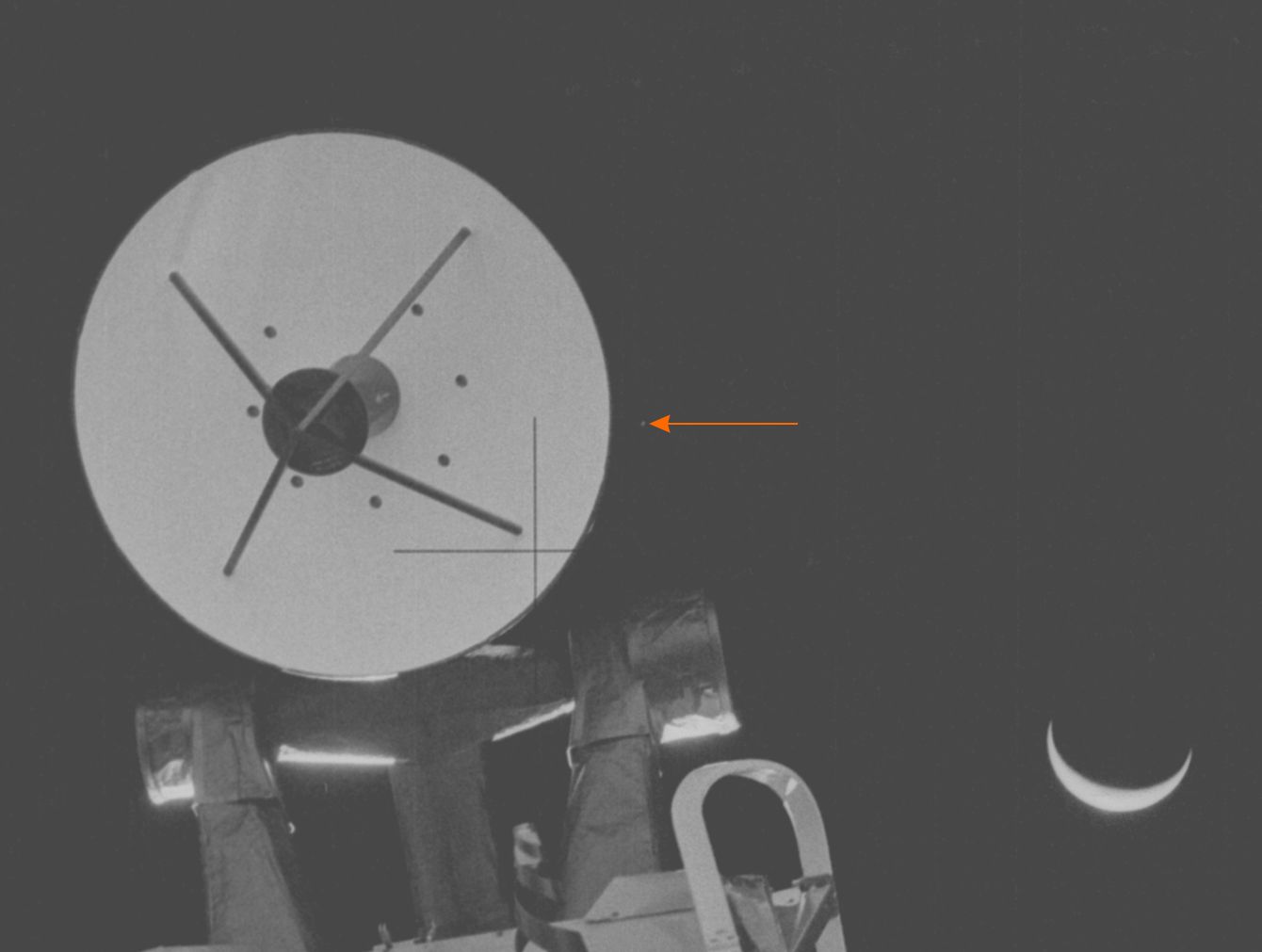 
The faint presence of Venus in these Apollo photographs is another example of how difficult it would have been to fake the pictures: it would have been necessary to take into account even this kind of minute astronomical detail.

Further examples are available in Photographing Stars at the Apollo Lunar Surface Journal.

NEXT: 5.3 Why is the flag blowing in the wind on an airless Moon?