IN A NUTSHELL: Actually, it is. The large boulders that Neil Armstrong says he overflew just before landing are faintly visible in the Apollo 11 photographs, but only in the high-resolution scans, because they’re over 400 meters (1,300 feet) away and therefore appear tiny. Moreover, from the landing site they were upsun and therefore impossible to document in detail. However, these boulders are clearly visible in the pictures of the landing site taken in 2009 by the Lunar Reconnaissance Orbiter.


THE DETAILS: Descriptions of the first Moon landing often mention dramatically that the automatic systems of the lunar module were taking astronauts Neil Armstrong and Buzz Aldrin straight into a dangerous crater surrounded by large boulders, but Armstrong took manual control and flew on to find a clear landing spot. This took so much time that the Apollo 11 astronauts landed with less than a minute of fuel to spare.

This episode is frequently used to point out the advantages of having a pilot on board to deal with the shortcomings of automatic systems and to stress how difficult and dangerous it was to land on the Moon.

However, the photographs taken by Aldrin and Armstrong while they were on the Moon show no trace of this alleged nearby boulder field. As far as the eye can see, the landing site is flat and featureless. Perhaps, it is argued, this detail was added to embellish the story and make it more exciting.

That’s a doubt that we can dispel by looking at the data. Apollo 11’s landing path, or ground track, is published in the Apollo 11 Mission Report and shown partly in Figure 5.19-1. 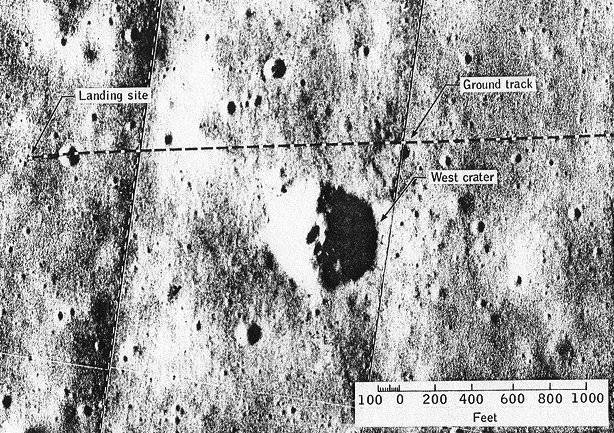 Figure 5.19-1. The final portion of the ground track of Apollo 11. The landing trajectory ends on the left. The large crater at the center is known as West Crater. Detail from the Apollo 11 Mission Report (1969).


Armstrong’s decision is transcribed in the 1969 Technical Debrief; the Apollo 11 Preliminary Science Report identifies the boulder-littered crater as West Crater. This crater is visible in the photograph shown above, but no boulders can be seen. This, it turns out, is simply due to its low resolution.

Today, however, we have the high-resolution pictures of the Apollo 11 landing site acquired by the Lunar Reconnaissance Orbiter (LRO) probe since 2009. These images show the boulders quite clearly, as in Figure 5.19-2. 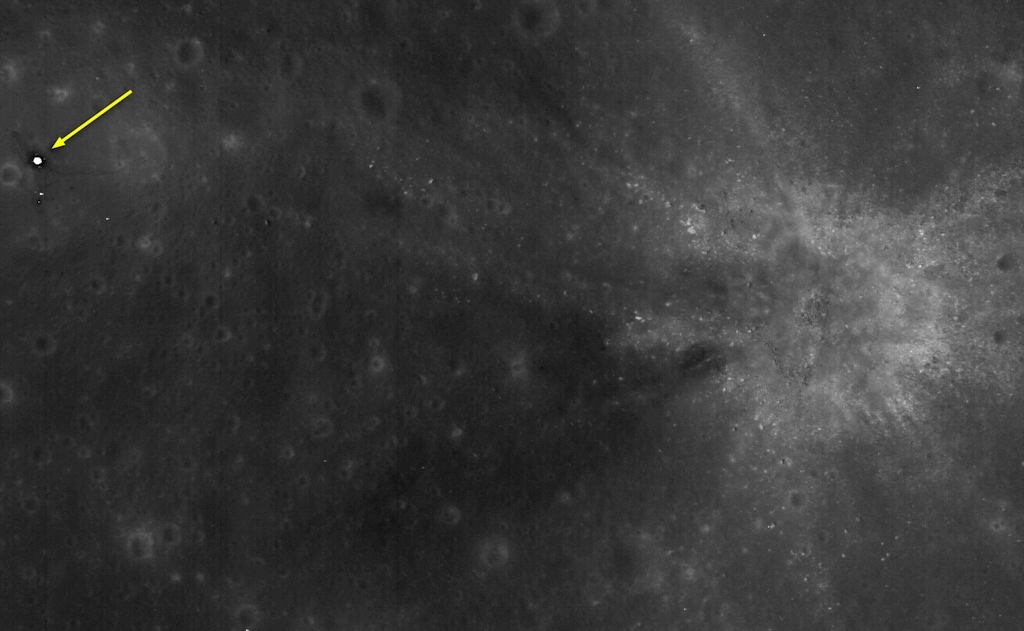 Figure 5.19-2. The Apollo 11 landing site as imaged by the LRO probe in 2009. West crater is on the right. The arrow indicates the descent stage of the lunar module (the white dot).


In particular, image M109080308RE, taken by the LRO probe and shown partially in Figure 5.19-2, captures West Crater in very fine detail. It shows that the crater is indeed filled and surrounded by boulders, which stand out as white dots. Their size can be grasped by noting that the white dot indicated by the arrow in the figure is the central part of Apollo 11’s descent stage, which is about four meters (13 feet) wide without the landing legs.

The boulders can’t be seen in the photographs taken by the Apollo 11 astronauts while they were on the lunar surface for two main reasons. The first one is that they were too far away: the scale the figures indicates that the center of West Crater was over 500 meters (1,600 feet) from the LM.

The second reason is that in order to take any pictures of West Crater, the astronauts would have had to point the camera towards the sun. This would have produced very poor, lens flare-filled photographs, so no photos were taken in that direction. In some pictures, West Crater is at the very edge of the frame and a few boulders can be glimpsed, but only in the high-resolution versions, as shown for example in Figure 5.19-3 and Figure 5.19-4. 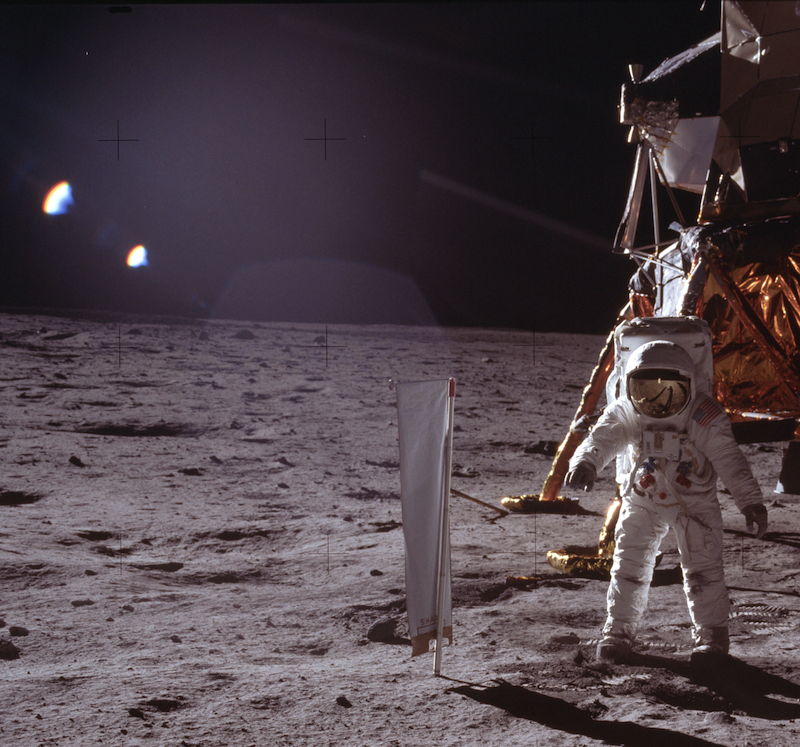 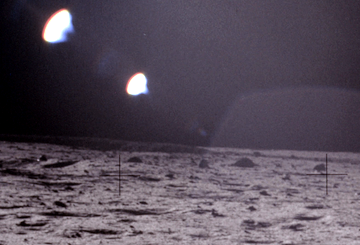 
However, there’s another source of photographic coverage of the area supplied by the Apollo 11 astronauts: the 16 mm color film shot during descent and landing. Since the lunar module flew past West Crater as it descended to land, the boulder field should be quite visible in this film.

Indeed it is: Figure 5.19-5 is a frame from that footage, taken from an altitude of about 120 meters (390 feet) with the camera looking down almost vertically. The boulders are large enough to be distinctly visible from that height and cast conspicuous shadows. 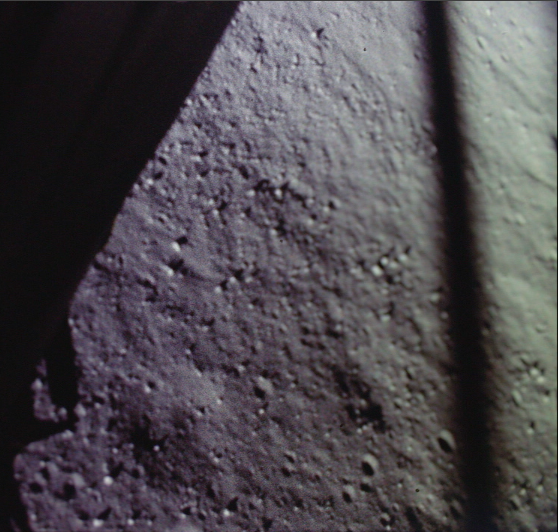 
As a further cross-check, researchers Rene and Jonathan Cantin produced and published a video (Figure 5.19-6) that matches the Apollo 11 landing film against a photograph of the same area taken in 1967 by an uncrewed Lunar Orbiter probe.


Figure 5.19-6. Comparison of Apollo 11 onboard footage and Lunar Orbiter images of the landing site. Credit: Rene and Jonathan Cantin.

In other words, instead of being evidence of conspiracy, the issue of the apparently missing boulders is a great opportunity to perform cross-checks on the available NASA documents and verify that they are mutually consistent.

NEXT: 5.20 Why are the tracks of the Moon car missing?