5.17 How come Aldrin looks like he’s standing in a spotlight?

IN A NUTSHELL: He’s not. He’s standing in a patch of the lunar surface where the lunar module’s rocket exhaust swept away the dust, making the surface brighter. Also, the spotlight-like effect is exaggerated in low-quality copies of the photos and is less pronounced in direct scans of the originals. Other natural optical phenomena, such as the way the dust reflects light, can also cause brighter areas in photographs.


THE DETAILS: Several Moon hoax theorists observe that in some photographs of the Apollo 11 landing, such as AS11-40-5903 (Buzz Aldrin’s “tourist photo”), the ground around the astronaut is far brighter than the rest. As the distance from the astronaut increases, the ground becomes unusually darker. This effect, they claim, is the result of a studio spotlight.

This alleged evidence is often illustrated by copies of these photographs in which the contrast has been pushed, exaggerating the difference in brightness, as in the example shown in Figure 5.17-1, which is taken from Fotografare, an Italian photography magazine whose editor supported the claims of fakery. Moon hoax literature knows no language barrier. 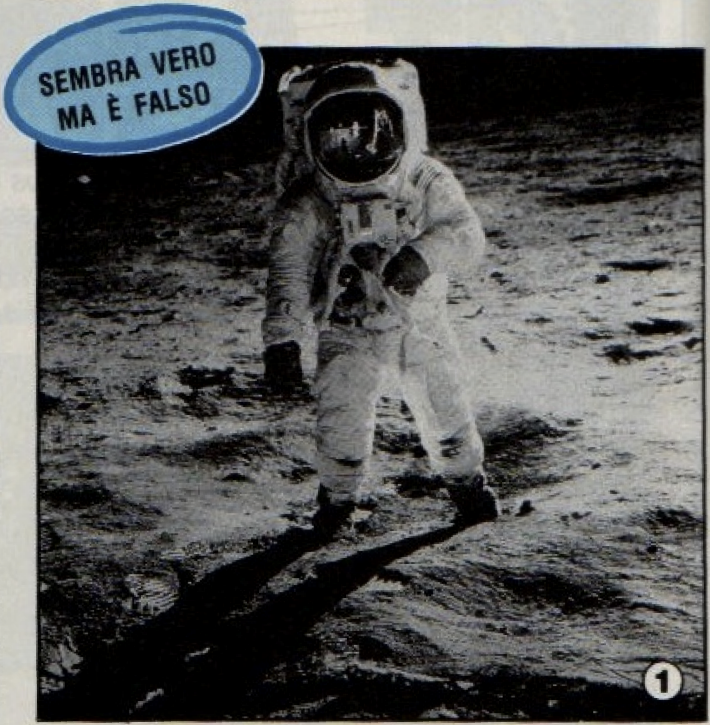 
The common-sense objection to this allegation is to ask why the organizers of the hypothetical fakery on behalf of the US government would make such a stupid lighting mistake. Couldn’t they afford enough spotlights?

Another objection is that if Aldrin is standing in a studio spotlight, his shadow should be washed out in the spotlit patch and then be dark in the foreground, where the “spotlight” effect ceases, but it isn’t.

Moreover, a spotlight would produce a second shadow of the astronaut, but there isn’t one in the pictures.

There’s another problem with this conspiracy theory: the original photographs don’t show this spotlight effect. It only appears in the low-quality versions used by these theorists. 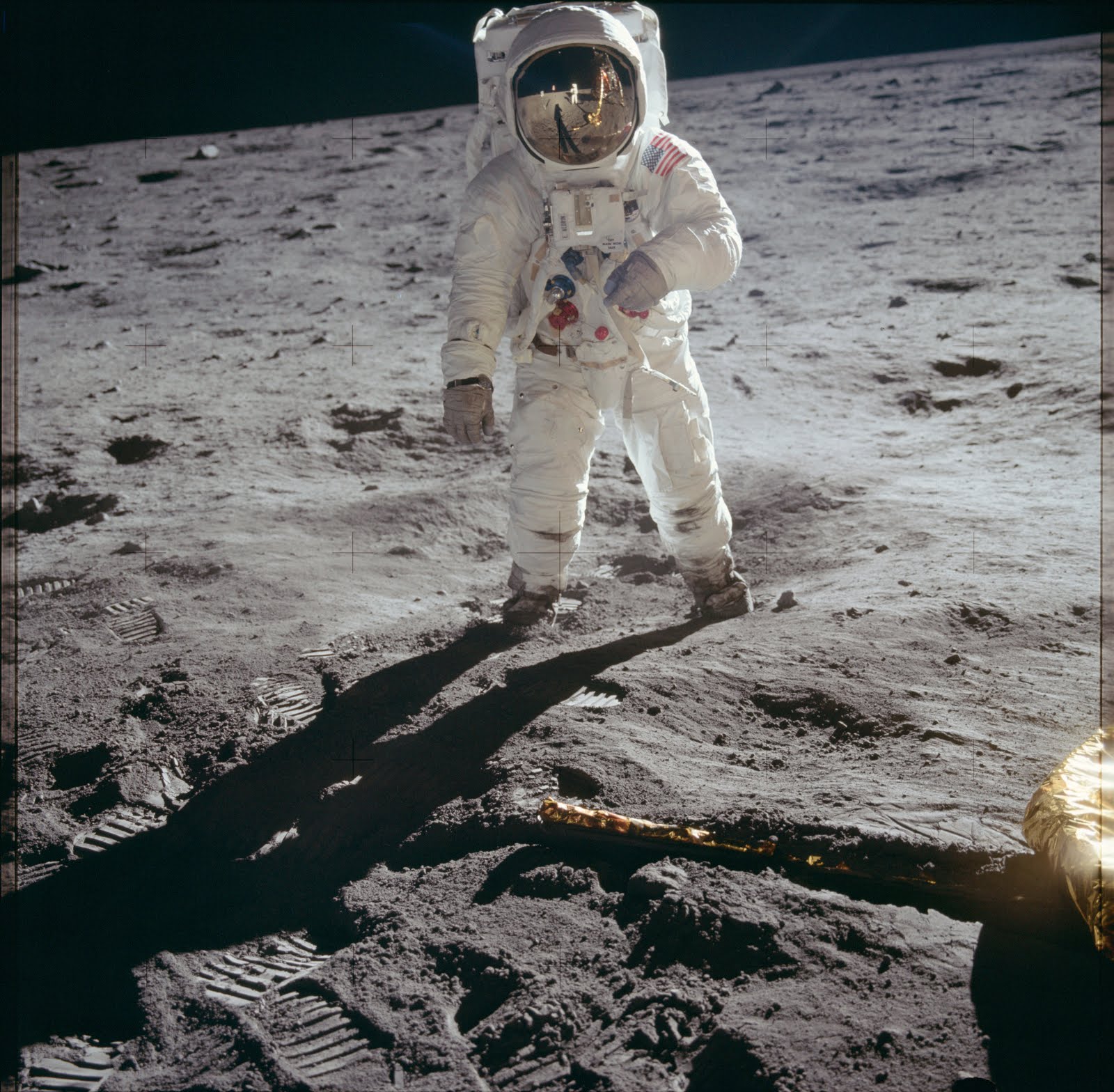 
The simple explanation, in other words, is that the alleged “hotspot” or “spotlight” effect is only an artifact generated by poor duplication and by boosting contrast to extreme levels.

However, there is a slight difference in ground brightness even in the original scans. In Figure 5.17-2, the foreground is somewhat darker than the area where Aldrin is standing, and the terrain behind the astronaut is likewise darker. The slightly brighter area appears to be a roughly central band that sweeps diagonally from left to right.

If the difference in brightness of the ground can’t be explained by lighting conditions, then perhaps the ground itself was brighter around Aldrin for some reason. Finding that reason requires a bit of detective work.

First of all we need to locate that part of the ground. In the uncropped version of AS11-40-5903, a leg of the lunar module is visible next to Aldrin. The direction of the shadows allows to determine that it’s the LM’s right leg (as seen from the crew compartment). So the brighter ground is to the right of the lunar module’s right leg (again as seen from the crew compartment). 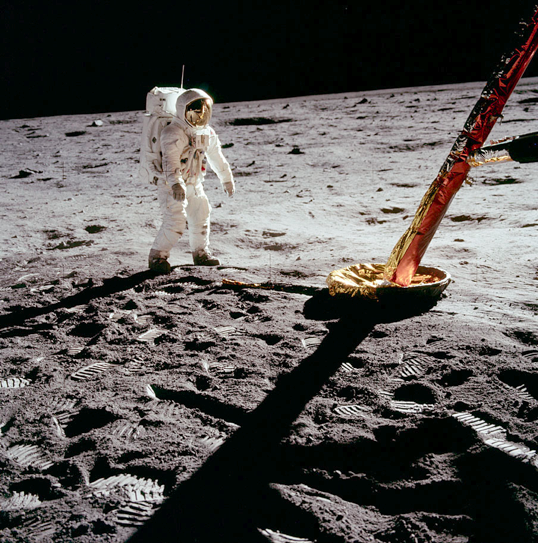 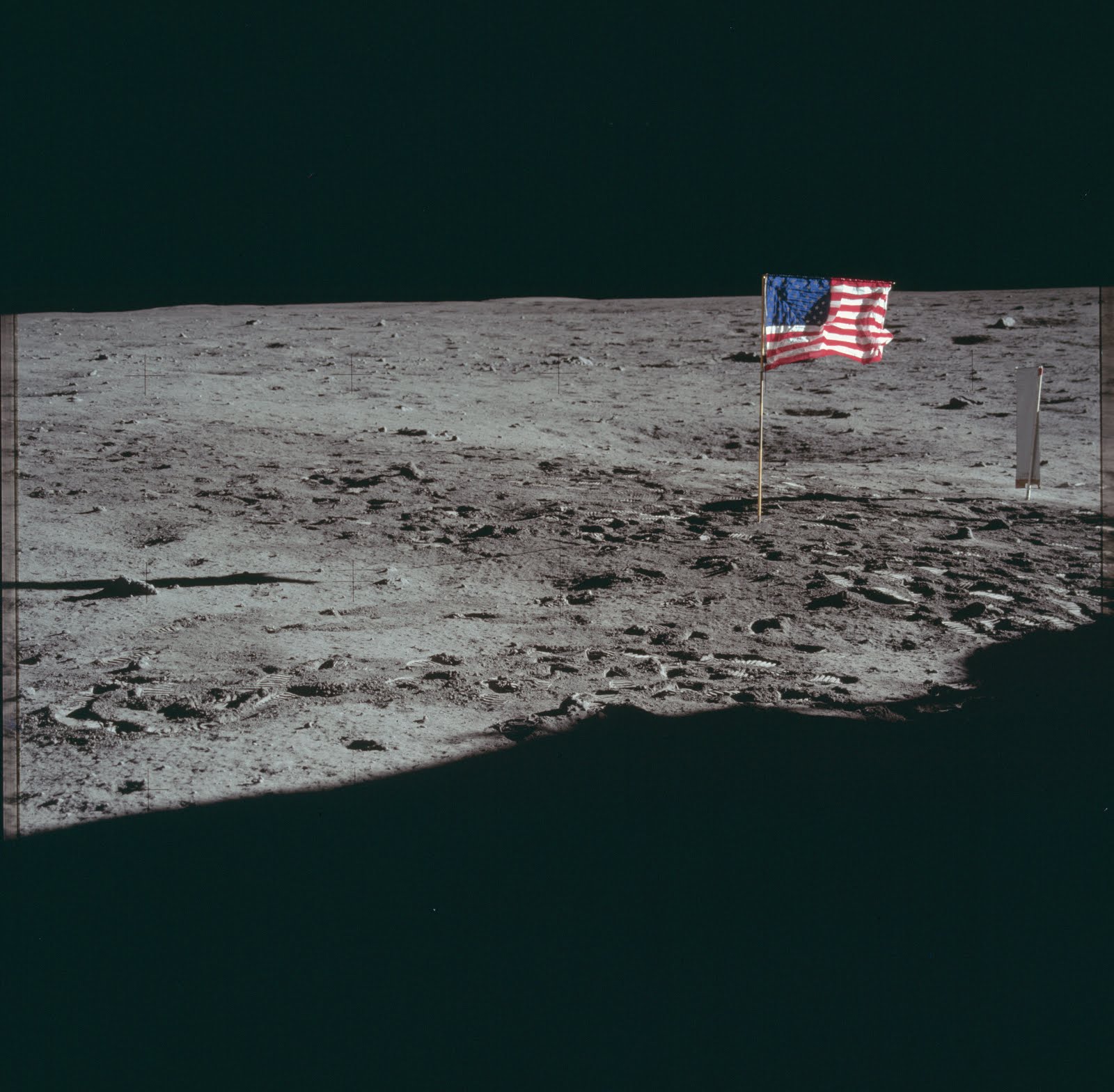 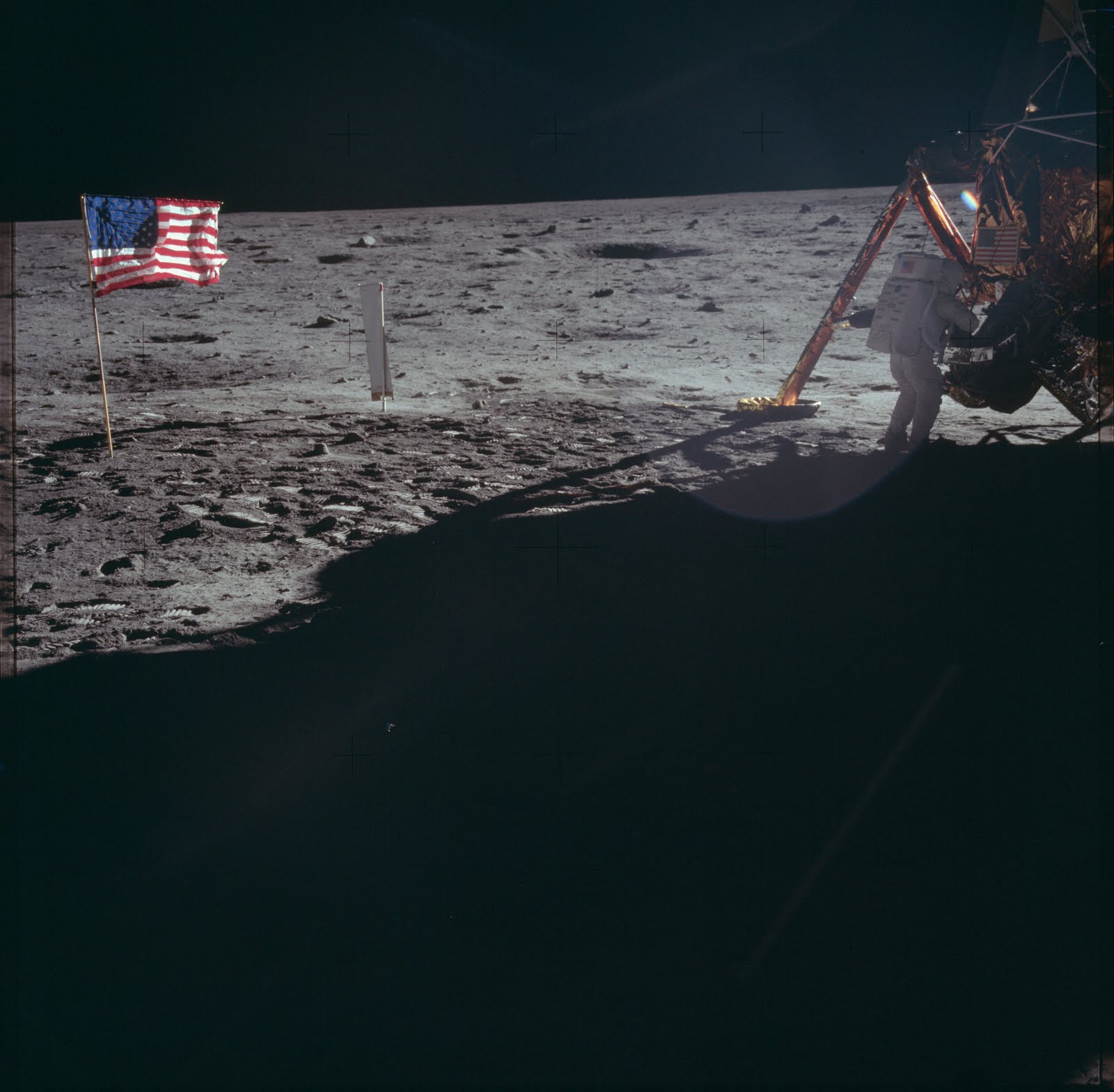 
These photos, too, exhibit the same “spotlit” effect despite the fact that there’s no astronaut in the brighter patch (Neil Armstrong is in the picture in AS11-40-5886, but he’s standing in the shadow of the LM). Why would the alleged fakers put a spotlight there when there’s no astronaut to be spotlit?

More importantly, the wider view reveals that the brighter region is actually an elongated streak that crosses the picture diagonally from the upper left to the lower right, and that the LM’s shadow is roughly at right angles to the streak.

The high-resolution scans of these photographs also suggest that the brighter patch is almost dust-free (astronaut bootprints are shallow or nonexistent in it), as if something had swept away the dust in that particular area and exposed a band of the underlying smoother, more reflective rock.

That something could be the LM’s descent engine exhaust, if the spacecraft had moved sideways just before touchdown. It did. The radio communications logs and the 16 mm film footage of the landing show that the LM drifted mostly sideways, first to the right (Aldrin: “4 forward. 4 forward. Drifting to the right a little”) and then to the left, seconds before landing, with negligible forward velocity.

This path is also supported by telemetry data, by the small pits to the sides of the LM footpads, and by the orientation of the contact probes that stick out of the ground.

The Apollo landing instructions required the astronauts to fly the LM with the sun behind them, so that they could use the LM shadow as an altitude reference. This is confirmed by the 16 mm footage. Therefore the general direction of approach in photos 5902 and 5903 is from the upper left: the LM’s exhaust swept a band arranged roughly at right angles to its direction of approach.

In other words, the explanation that best fits all the available facts is not that a spotlight was secretly and clumsily used, but that Buzz Aldrin was standing in the band of lunar ground that had been swept by the LM’s rocket exhaust, which had blown away the surface dust, exposing the brighter rock below.

In addition, the soil in the foreground has been churned up by the astronauts’ steps and this reduces its reflectivity.

This is a good example of how it can be challenging, even for a very expert photographer, to explain the apparent anomalies that occur in some Moon photographs without knowing the technical details of the circumstances in which they were taken.


In some Apollo photographs, the lunar soil is more brightly lit in the central region of the image. This, too, might be interpreted as the effect of a clumsily setup spotlight. 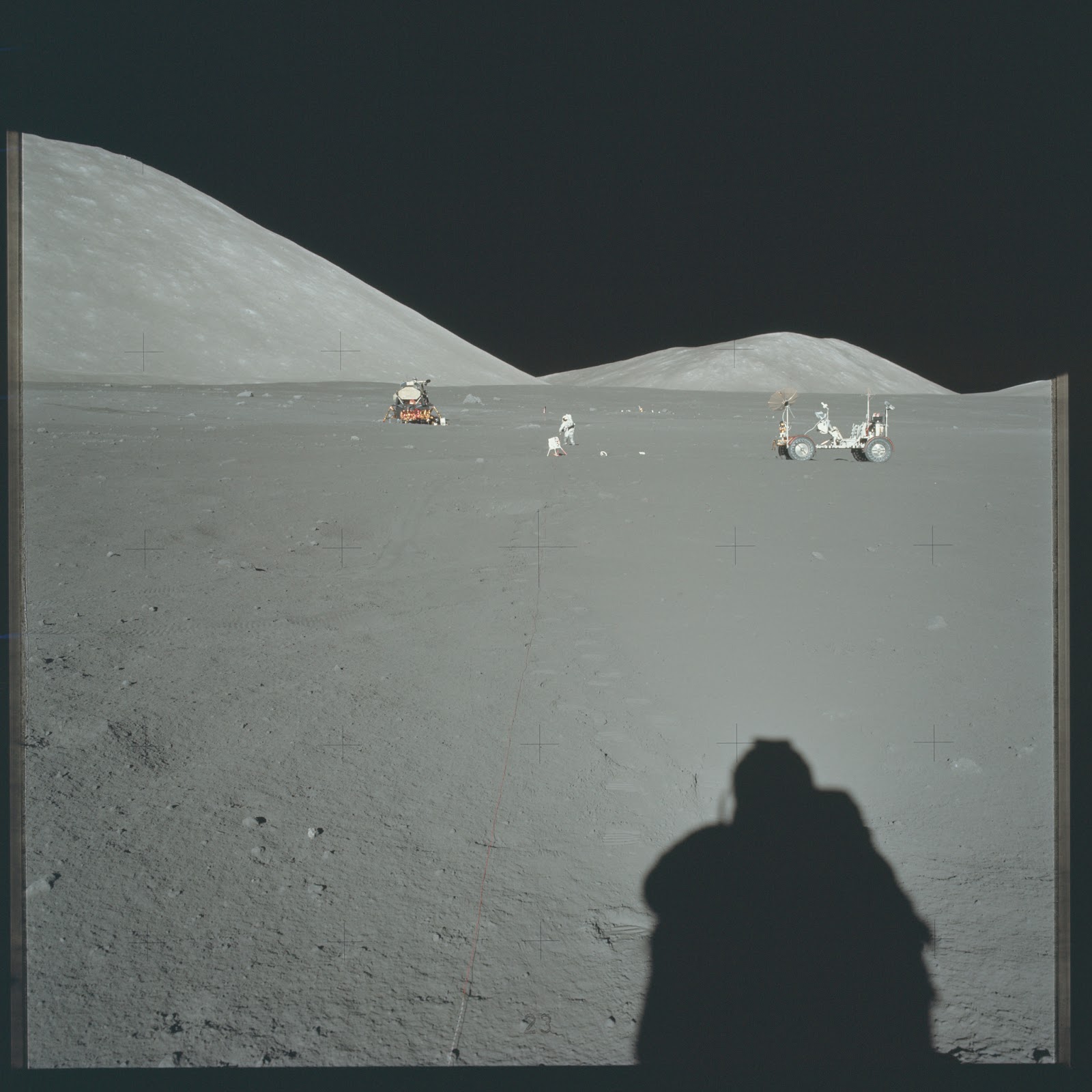 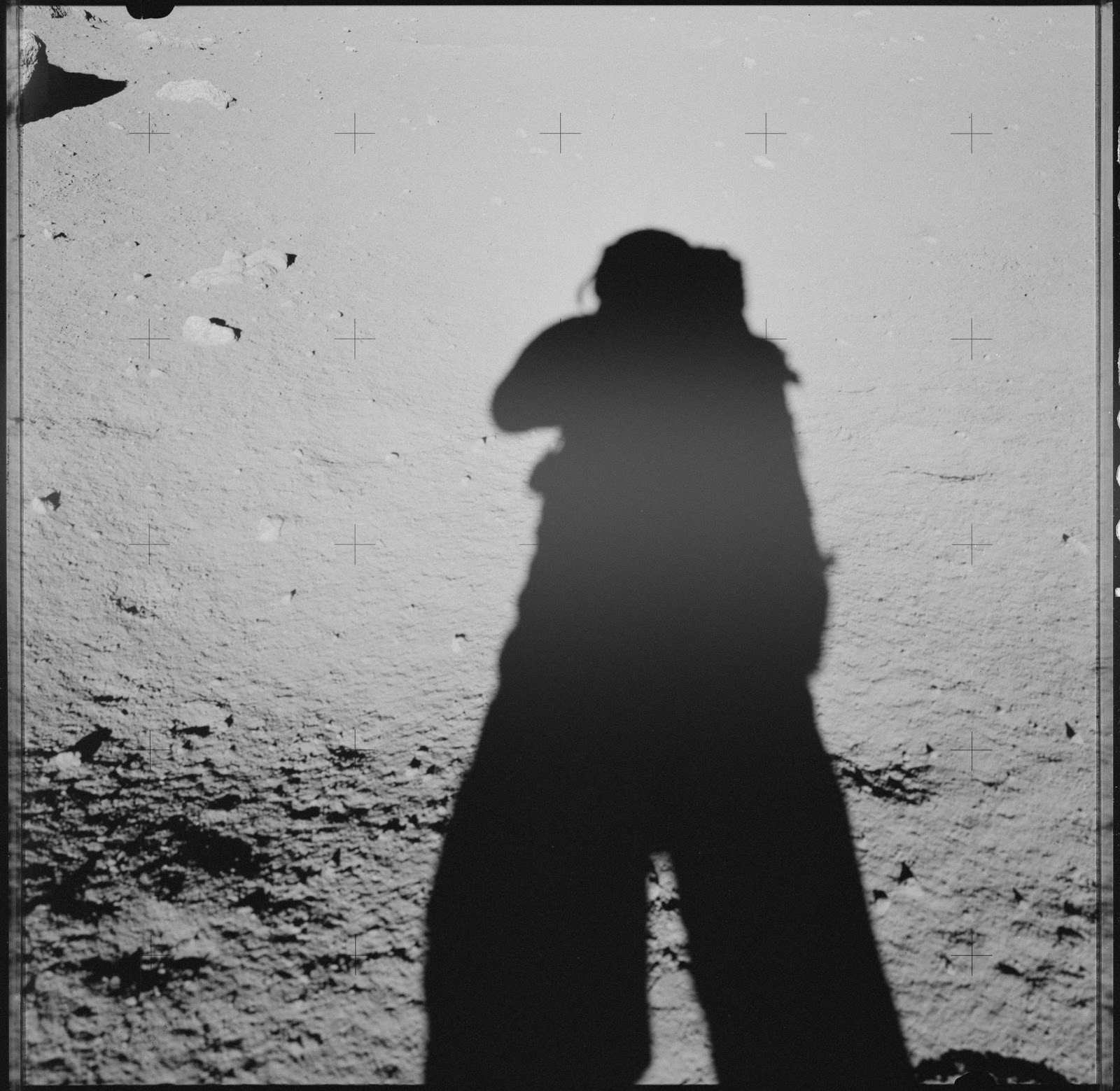 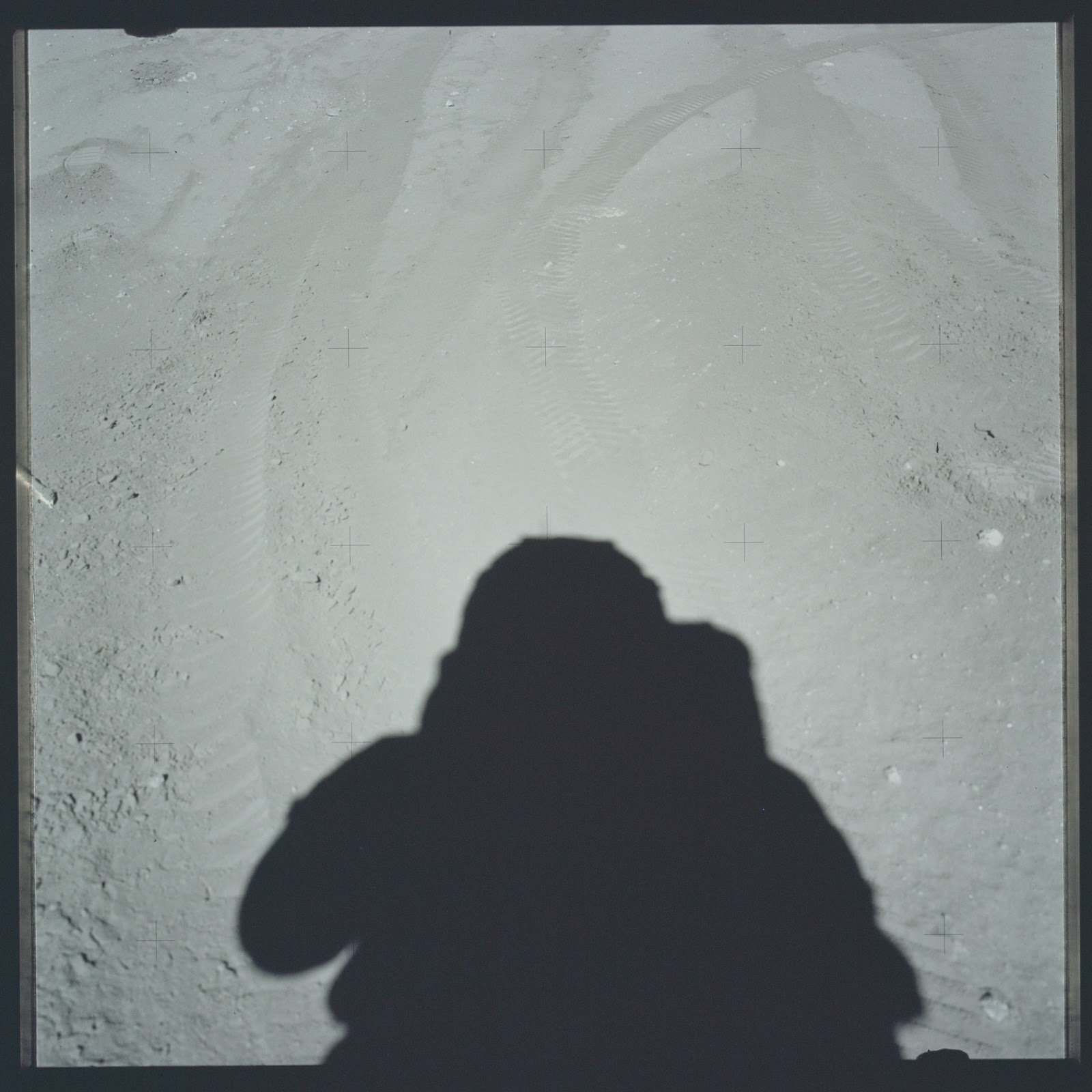 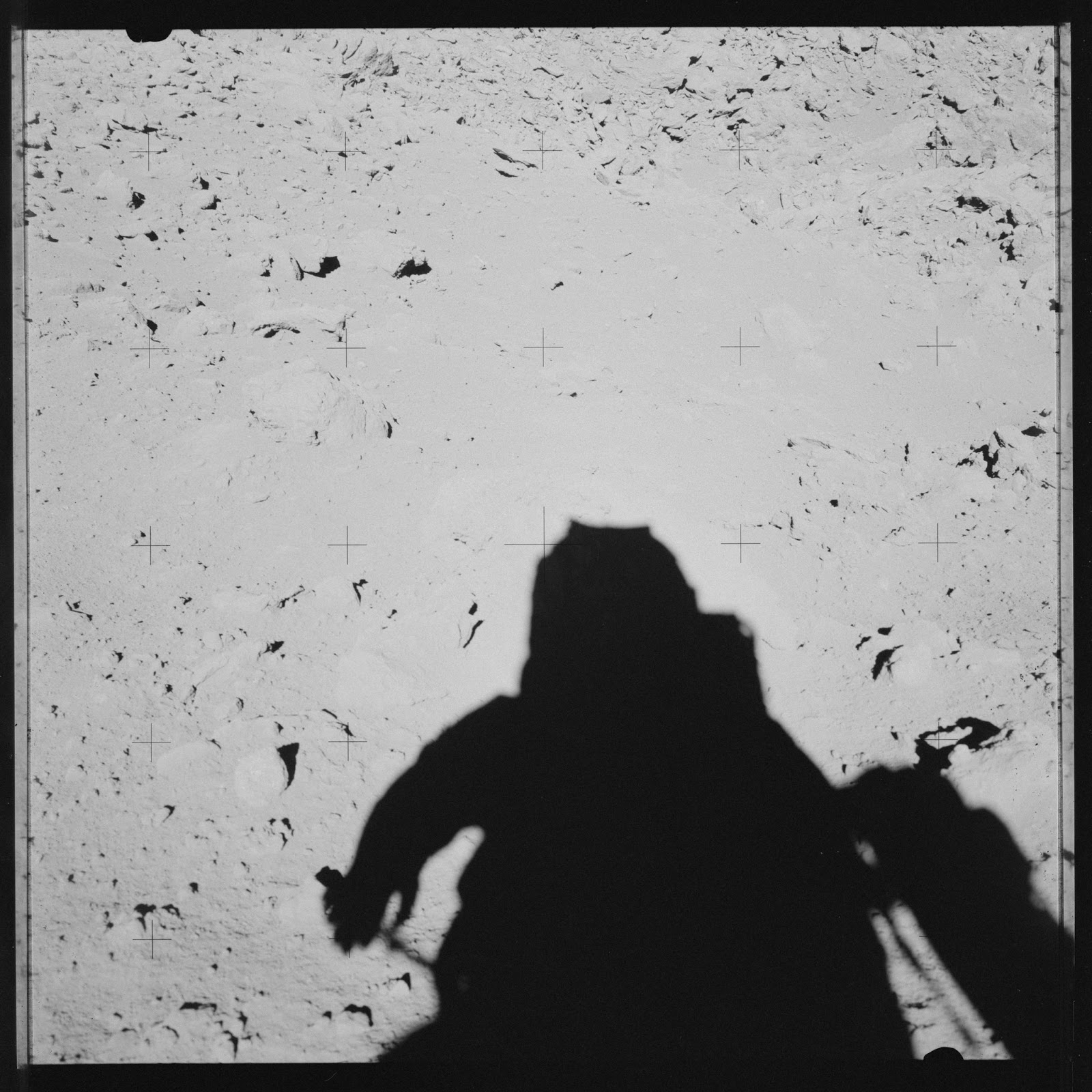 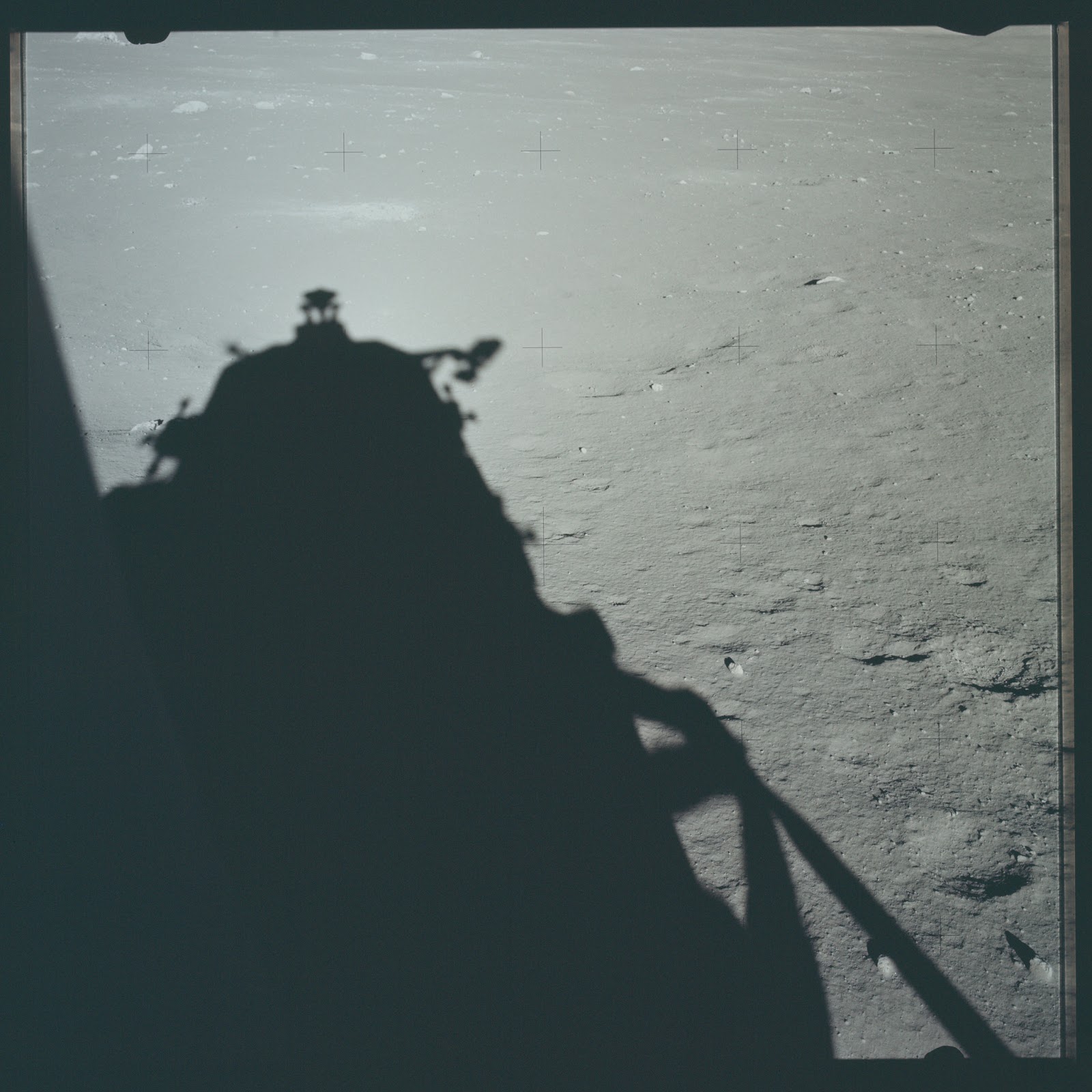 
Actually, this is an entirely natural phenomenon, which occurs also in photographs taken on the Moon by the Chinese Chang’e probes, as shown in Figure 5.17-11. 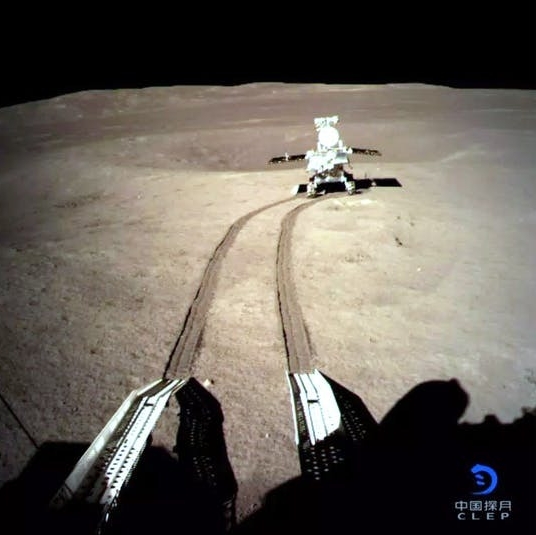 Figure 5.17-11. The Yutu 2 rover, photographed by the Chang’e-4 probe on the far side of the Moon, 4 January 2019. Credit: CNSA/EPA. Color correction by David Rothery for the Planetary Society.


This effect occurs in Lunar dust, and in dust in general, when the Sun is directly behind the camera. The grains of dust at the center of the frame only show their sunlit sides to the camera, whereas the grains that lie off-center also show part of their shadow sides. The visibility of these small shadows reduces the overall brightness of the peripheral regions of the photo from the point of view of the camera. The effect is known as zero phase, opposition surge, shadow hiding or heiligenschein and also occurs on other celestial bodies, including the Earth.*


A particularly good example of this phenomenon is provided by photographs of asteroid Ryugu taken by the Japanese probe Hayabusa 2 in 2019, which show the shadow of the probe on the asteroid, surrounded by a bright halo, as in Figure 5.17-12. 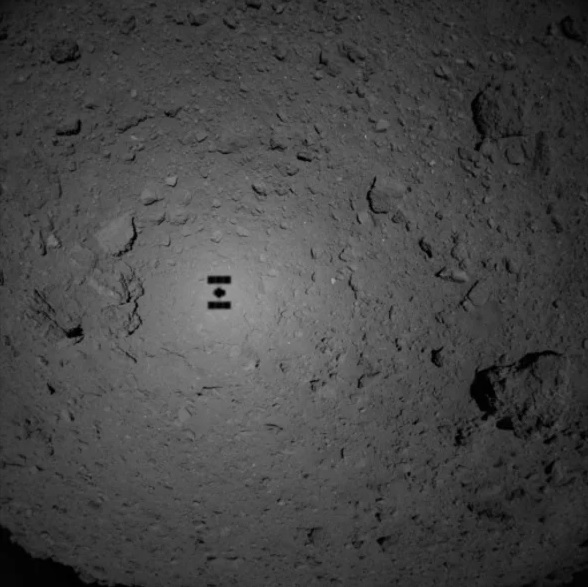