5.26 Why do Aldrin’s boots shine in shadow? Are they lit by a spotlight?

IN A NUTSHELL: No. The sheen on Buzz Aldrin’s boots is not caused by a studio spotlight but by the bright sunlight reflected by Armstrong’s reflective white spacesuit as he stands in the sun. The Moon boots in museums have a dull finish because they’re worn, but they were initially coated with lubricant which made them quite shiny when brand-new and clean. Also, the contrast and brightness of the photo used to present this apparent mystery have been boosted unrealistically.


THE DETAILS: In Apollo 11 photographs AS11-40-5866 and 5869, Aldrin’s boots have a bright white highlight that looks like a reflection from a flash or a bright spotlight. This is suspicious, it is claimed, because Aldrin is standing in shadow, no flashes or studio lights were taken to the Moon, and Apollo Moon boots had a dull gray finish. Therefore, it is claimed, obtaining this kind of highlight would have required a very powerful local light source. Here is an example of the controversial reflection: 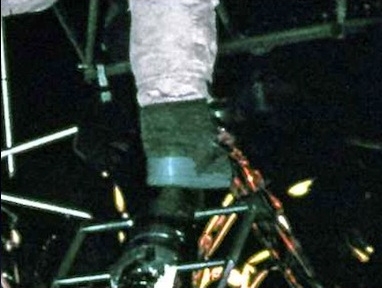 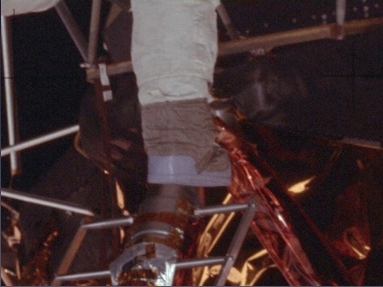 
First of all, the highlight isn’t really as bright as it appears in the top photo shown above, which is a version often used in pro-conspiracy publications and in which contrast and brightness have been exaggerated to the point of losing all shadow detail. The bottom photo shows the same detail, but taken (without processing) from the high-resolution scan publicly available at NASA’s GAPE site (eol.jsc.nasa.gov). The difference is quite remarkable.

Nevertheless, boots with a dull finish shouldn’t produce a highlight of any sort. But if we examine the manufacturing process of these boots, it turns out that there’s a very good reason for this sheen. The silicone rubber overshoes that formed the heel and sole of the boots were made in a mold. A lubricant was applied to the inside of the mold to prevent the silicone from sticking, so when the overshoe was removed from the mold it was coated with this lubricant. Archival footage of the process shows that brand-new Apollo overshoes were indeed shiny, and in the photographs of Aldrin’s descent from the LM these overshoes were being used for the very first time, so they probably still had some lubricant on them.

Finally, there’s the question of the light source. Conspiracy theorists jump to the conclusion that a studio spotlight was used, but actually there’s another powerful light source: Neil Armstrong’s bright white spacesuit. If we look at the TV broadcast, we can see that at this point of the lunar excursion Armstrong is close to Aldrin and is standing in direct sunlight. Apollo spacesuits were designed to reflect as much sunlight as possible to avoid overheating, so Neil’s suit is essentially acting as a man-sized reflector. In other words, the highlight is not proof of fakery.

NEXT: 5.27 Why is this photo of the LM on the moon so obviously fake?