5.12 How come there are photos of the landing site without the Lunar Module?

IN A NUTSHELL: Because that’s not the landing site; it’s a different location nearly a mile away. The hills in the background look identical not because they’re shot from the same location, but because they’re actually distant mountains, which don’t change appearance if the viewpoint moves by a mile or so, just like on Earth.


THE DETAILS: Some Moon hoax theorists point out that there are pairs of Apollo photographs showing the landing site with and without the Lunar Module. They claim it’s the same location because the hills in the background are absolutely identical in both pictures.

According to Fox TV’s Did We Land on the Moon?, this is “seemingly impossible, since the LM never moved and its base remained even after the mission.” And obviously there was nobody available to take photographs at the landing site before the LM landed, so there was no way to have a photo of the landing site without the LM. The show illustrates this argument with the pictures shown below, which are also mentioned by Aulis.com and by French conspiracy theorist Philippe Lheureux.


Hoax proponents often claim that this is evidence of fakery: they argue that the backgrounds were clumsily recycled to simulate different locations.

One might wonder why the alleged perpetrators of one of history’s greatest and most important conspiracies would be so dumb as to reuse a movie backdrop and hope to get away with it, but never mind: a little research reveals the technical fallacy in the hoax theorists’ argument. 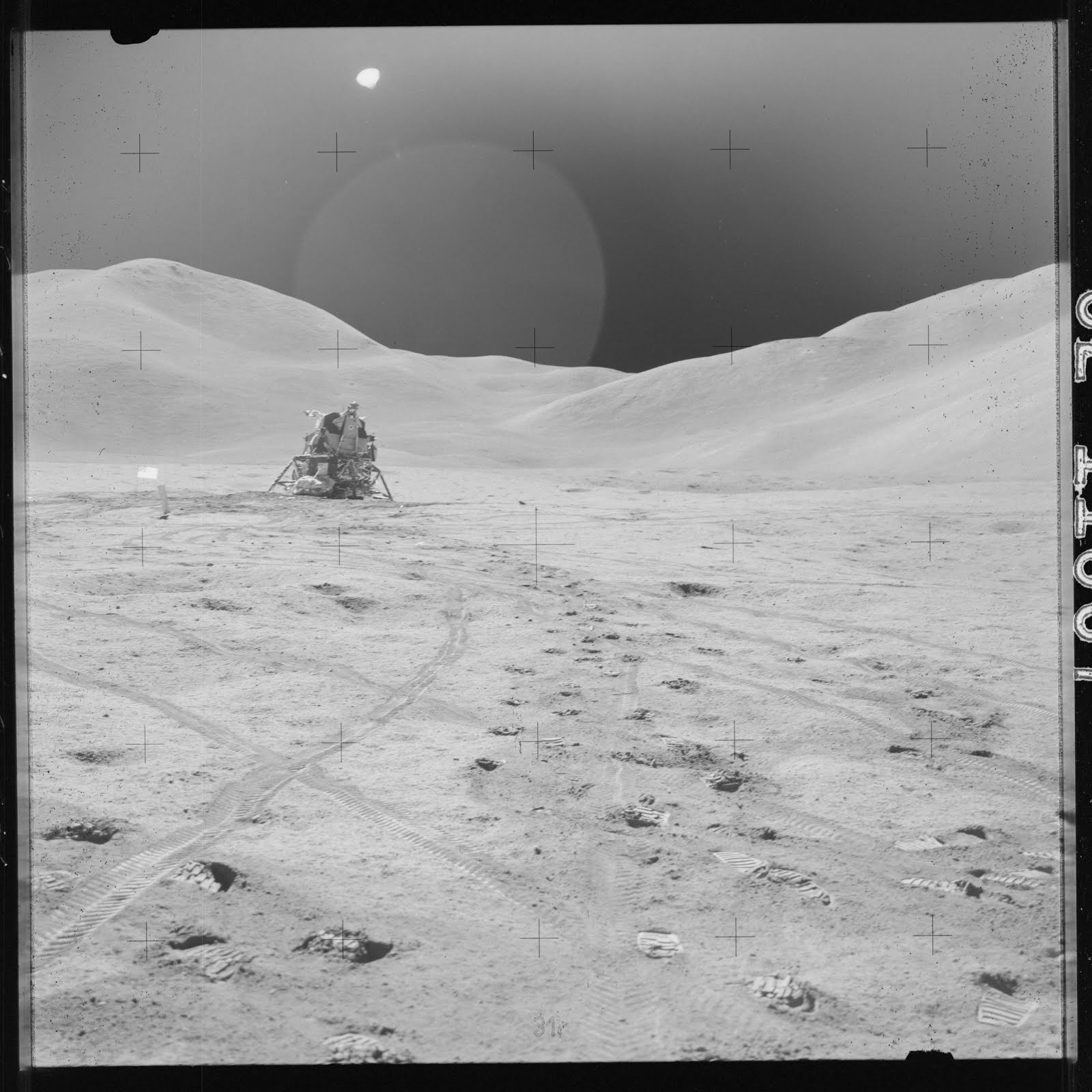 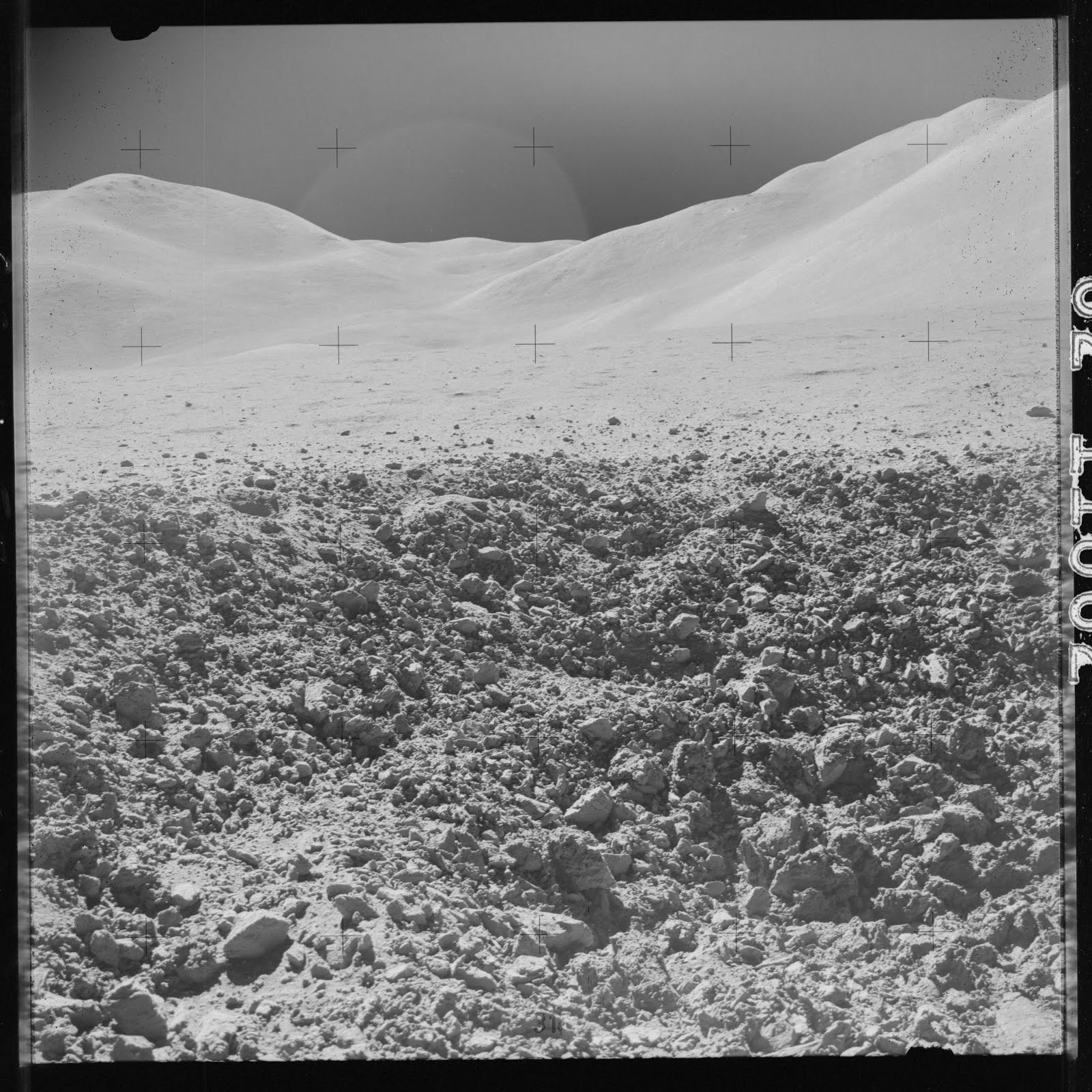 
NASA’s description of photos 11057 and 11082 reports that they were taken looking southwest and that the Apennine Mountains are on the left while the Hadley Delta mountain is on the right. Hadley Delta is 3500 meters (11,484 feet) high.

Figure 5.12-4. The Apollo 15 landing area photographed by the LRO probe (photo NAC M1123519889). Hadley Base is the exact landing site where the descent stage of the LM still stands today. Hadley Delta is the mountain located on the right in the photos in dispute, which were taken from the right looking left in the LRO photo. Credit: NASA/GSFC/Arizona State University.


The mission records and the Apollo 15 Surface Operations Overview of the Lunar and Planetary Institute report that the first photograph was taken from a point named Station 8, approximately 125 meters (400 feet) northwest of the lunar module, while the second one was taken from another location, known as Station 9, 1400 meters (4600 feet) west of the LM and visible in the traverse map (Figure 5.12-5). 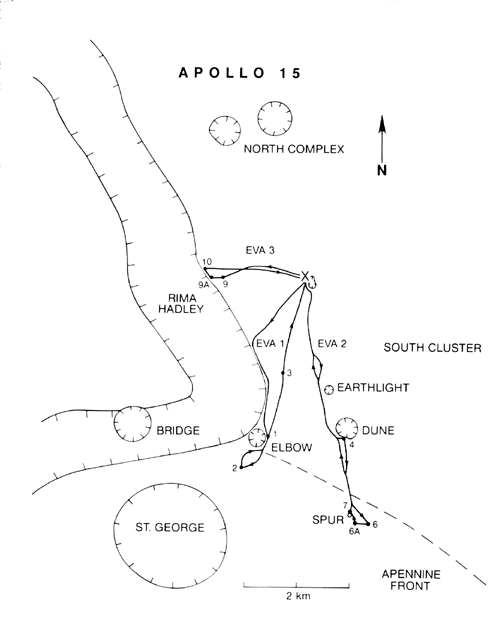 Figure 5.12-5. Detail of the Apollo 15 Traverse Map. Station 8 is not visible because it lies too close to the LM (indicated by X). The background of the photos in dispute is in the lower portion of this map.


In other words, the lunar module is not in the second picture simply because the photograph was taken about a mile away from the spacecraft, not at the landing site.

So why is the background identical? Because what appear to be nearby gentle hills are actually massive and distant mountains that rise to more than 4500 meters (14,800 feet), such as Mons Hadley, which is 4600 meters (15,100 feet) high and can be seen on the right in Figure 5.12-4.

We can determine the distance of this background by using a high-altitude photograph of the area, for example AS15-M-0414, taken from the Apollo 15 command module while it was orbiting the Moon, and superimposing on it the NASA traverse map of this mission (Figure 5.12-6). Using the scale reference of this map, it turns out that the foot of the nearest mountains, the ones on the right in the disputed photos, is about 3.5 kilometers (2.2 miles) from the spot where the photos were taken, while the mountains at the center are 14 kilometers (8.7 miles) and the ones on the left are about 21 kilometers (13 miles) away. 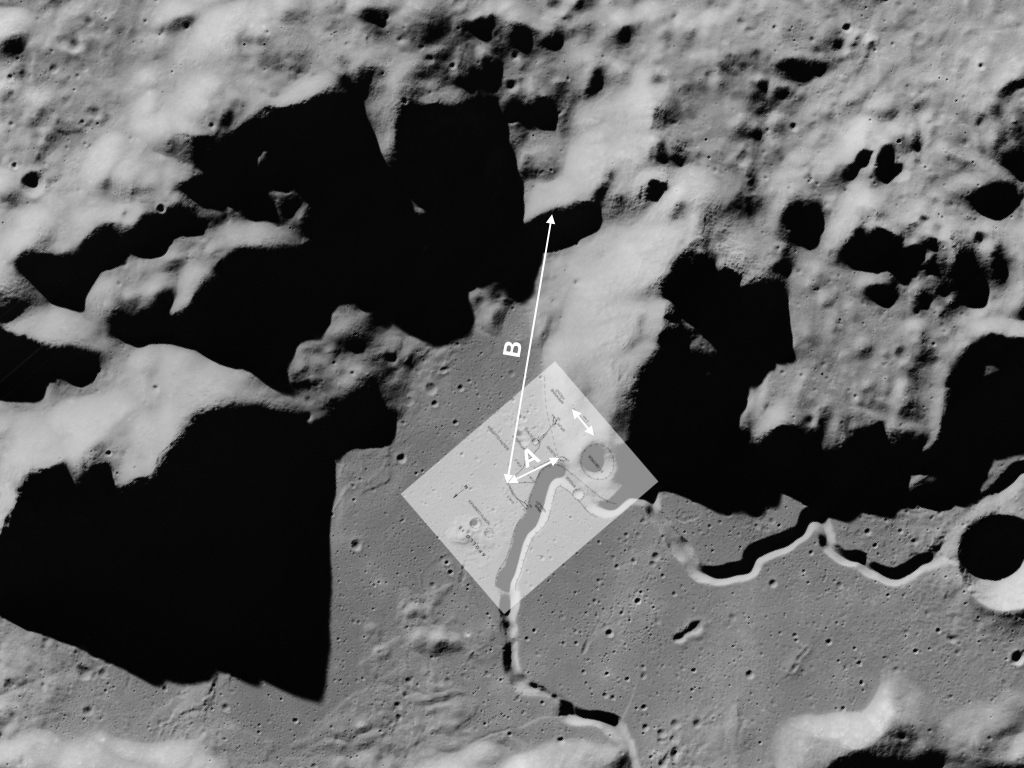 
These distant mountains are misinterpreted as hills not only because of the lack of research by conspiracy theorists but also because on the Moon there’s no air and therefore there is no telltale haze and there are no familiar size references, such as trees, roads or houses. Moreover, the horizon is a lot closer than on Earth: as mentioned previously, on level ground it is only 2.4 kilometers (1.5 miles) from the viewer.

All this makes it hard to realize that these are tall mountains rising from 5 to 26 kilometers (3.1 to 16.1 miles) from the landing spot and viewed from different locations. That’s why this distant background seems to be unchanged while the foreground is completely different.

Suppose you photographed a tall mountain from a village located about 15 kilometers (9 miles) away, and then you moved about a mile to take another photo of the same mountain. You would not be surprised to find that the village houses in the foreground have changed completely but the mountain looks essentially the same. This is exactly what is going on in the Apollo photos questioned by conspiracy theorists: they were taken in two different places and show distant objects that remain essentially unchanged while closer ones change completely.

The claim that the background is a studio backdrop also doesn’t stand up to scrutiny if the original photos are compared in detail. It turns out that the shape of these distant mountains actually changes, albeit very slightly, because of the change of viewpoint. This means that the mountains are three-dimensional objects, so much that their perspective changes.

This comparison is easier if you look at the central portions of the two Apollo 15 photographs to find the differences in the contour of the maintains. In other words, the alleged backdrops are not identical at all as conspiracy theorists instead claim.


These differences can be used to create a stereo pair that reveals the three-dimensional depth of the allegedly flat backdrop.


Other cases of alleged recycled backdrops are discussed in A Debunking of Jack White’s Apollo Photo Analysis (2012) on Robert Braeunig’s Rocket and Space Technology website.

NEXT: 5.13 Why do the visors show reflections of studio lights?