Approximately 20,000 still pictures were taken during the Apollo missions, all using photographic film: thin strips of transparent material, coated with special chemicals that react when exposed to light and reveal a color or black-and-white image when they are immersed in special baths of other chemicals. There were no digital cameras at the time.

The cameras taken to the Moon by the Apollo astronauts used mostly Kodak Ektachrome MS and EF color film, with a speed (sensitivity to light) of ISO 64 and 160 respectively, and Kodak Panatomic-X black-and-white film, with a speed of ISO 80 (ASA units were used in the 1960s instead of ISO, but they are fully equivalent).

Both films were in the 70 mm format, which means that the film strip was 70 millimeters (2.75 inches) wide. The resolution (capacity to record fine details) of these films was impressive even by today’s standards: 80 lines per millimeter for color film and 170 lines per millimeter for black-and-white. In today’s digital units, that’s roughly equivalent to 40 megapixels for color pictures and to a whopping 160 megapixels for black-and-white ones, according to the Arizona State University’s state-of-the-art Apollo image scanning project. 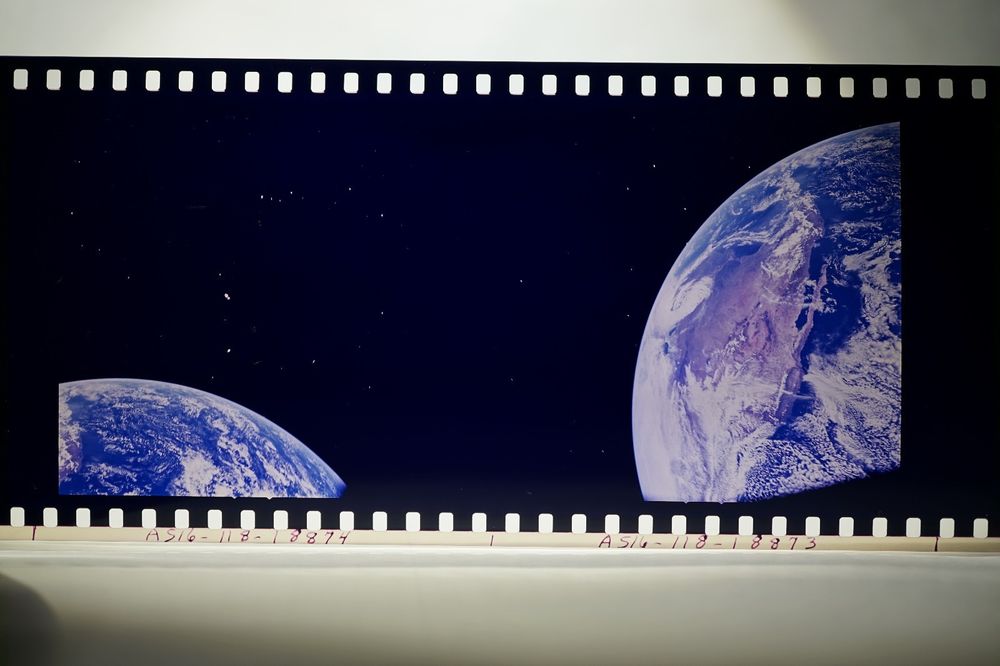 Figure 5.1-1. A portion of 70 mm photographic film similar to the one used for the Apollo flights. The film shown is a duplicate of an original Apollo 16 film. The white flecks are fragments that broke off the spacecraft during the extraction of the Lunar Module. Source: Terapeak.com. 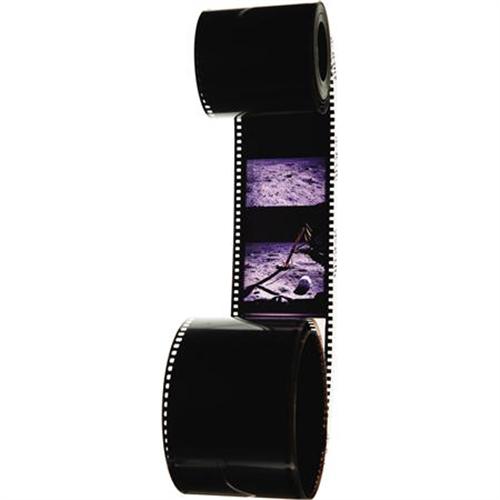 Figure 5.1-2. A contact duplicate of the 70 mm film used on the Moon for the Apollo 11 mission, from Buzz Aldrin’s personal collection. It was auctioned in 2008 for approximately 6,000 dollars. Source: Icollector.com.


So-called color reversal film was used for the color photos. This kind of film produces slides (transparencies) that can be viewed directly instead of negatives (images with reversed colors) that need to be printed. This choice might appear unusual, since negative film is more tolerant to difficult lighting and to over- and underexposures, but it was dictated by the awareness that negatives would have entailed color accuracy problems: photographs taken in space or on the Moon often don’t include any familiar objects that can be used as a color reference and therefore print lab technicians would not have known how to set their printing equipment correctly to render the true colors. Color reversal film doesn’t have this problem.

The Apollo films were derived from the ones used for high-altitude photo reconnaissance, which were designed to withstand temperatures down to -40°C (-40°F). Their special Estar polyester base had a melting point of 254°C (490°F) and was thinner than usual, allowing to store enough color film for 160 photographs or black-and-white film for 200 photos in a magazine: a removable and light-tight container.

These magazines constituted the rear portion of the custom-built, motorized Hasselblad 500EL cameras used for nearly all the photographs taken during the lunar excursions. These cameras had manual exposure and focus setting and a lens with a fixed focal length (i.e., no zoom). On the lunar surface, Apollo missions 11 to 14 only had a single Zeiss Biogon wide-angle (60 mm) lens; later missions added a 500 mm telephoto lens. 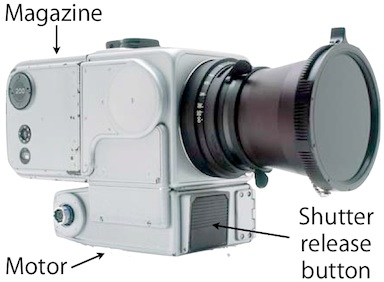 
Film advancement was controlled automatically by the electric motor of the camera (the lower block in Figure 5.1-3).

Inserting the film in the magazine wasn’t trivial, as shown in the video in Figure 5.1-4, which relates to a camera that is very similar to the ones used on the Moon but shows a much shorter film roll than the Apollo roll shown in Figure 5.1-5. Accordingly, this procedure was performed by technicians on the ground long before liftoff. 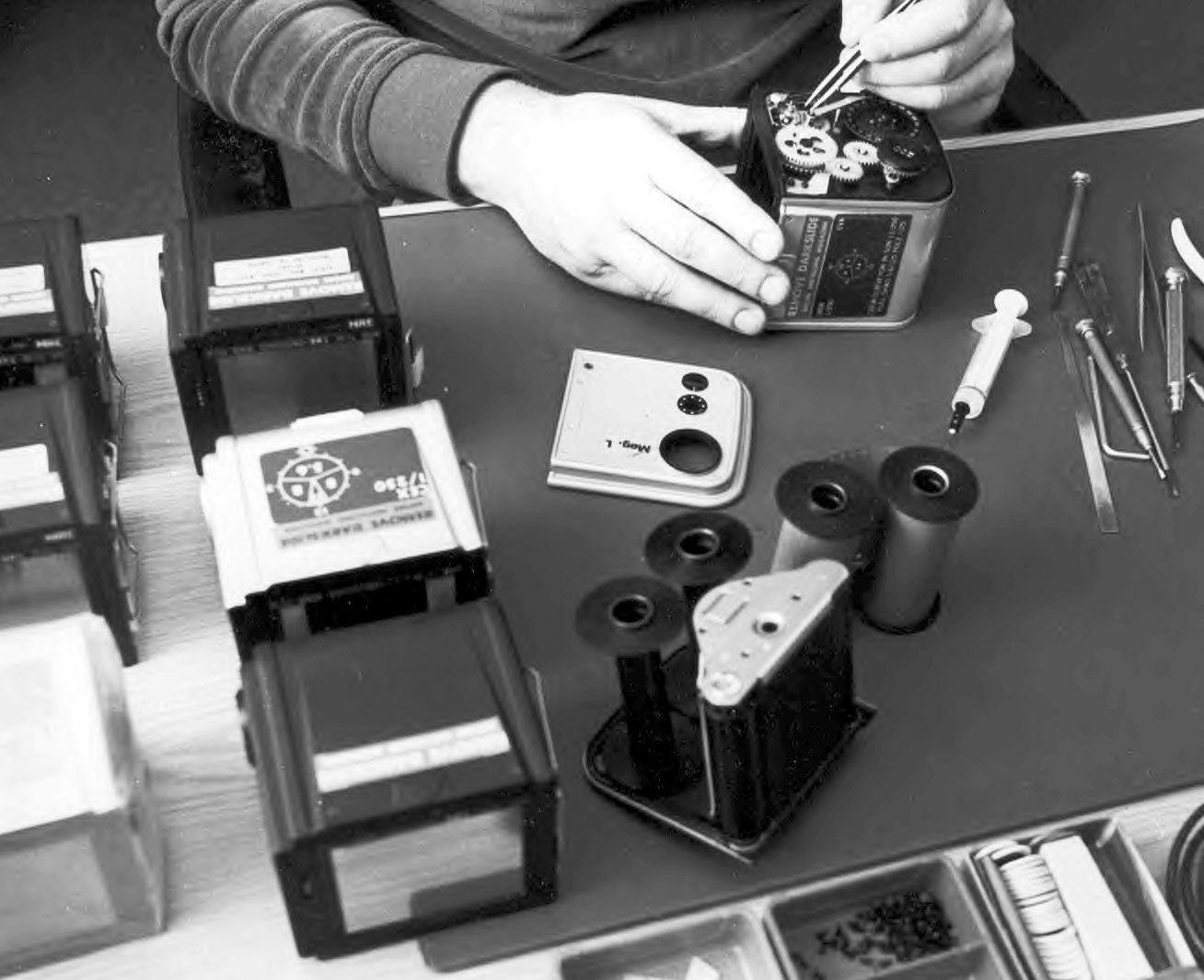 Figure 5.1-5. A Hasselblad technician prepares a film magazine for Apollo missions. The mechanism for supporting the film on two spools can be seen in the foreground. Photo C-81-4. Source: ALSJ/Ulli Lotzmann.


The cameras had large adjustment levers to allow handling even with the thick gloves of a lunar spacesuit. The shutter release button was much larger than normal for the same reason.

Focusing was guided by distance markings on the lens and simplified by the considerable depth of field (range of distances over which objects are in focus) of the wide-angle lens at the settings allowed by the bright sunlight: the recommended aperture (also known as f-stop) was f/5.6 for photographs in shadow and f/11 for taking pictures of subjects in full sunlight. The standard exposure time was 1/250th of a second. The film magazines carried a sticker which reminded the astronauts of these settings, which had to be made manually. 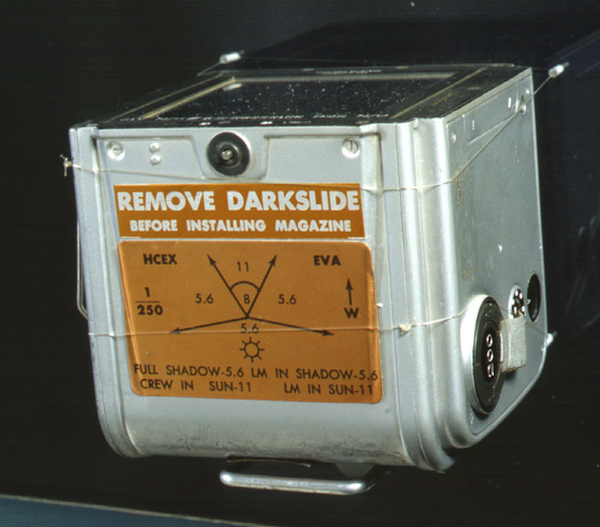 Figure 5.1-6. A film magazine used for the Apollo 11 mission. Note the sticker that reminded the astronauts of the settings for the various lighting conditions.


The Hasselblad cameras had no viewfinder, since the astronauts would have been unable to use one while wearing their helmets, and there was no on-screen preview like we have today with digital cameras and mobile phones, so aiming was done by pointing the camera roughly in the direction of the subject. The moonwalkers were aided in this by their extensive photography training and by the wide field of the lens (approximately 49° width and height, 66° diagonal).

A silver-colored coating was applied to the camera bodies used on the lunar surface, in order to reflect the light and heat of the sun and reduce the risk of overheating. Onboard cameras were coated with a more traditional black.

For Apollo 15, 16 and 17, special automatic cameras were installed in a fixed position on board the Service Module. These cameras were used to map the Moon and were called Metric Camera and Panoramic Camera; they took photographs of the lunar surface from orbit and recorded them on film that was 12.7 centimeters (5 inches) wide. To provide a geographical reference, these cameras were coordinated with a Stellar Camera, which used 35 mm film to take pictures for the stars located at the zenith (directly overhead) of the region being overflown.

Apollo 11, 12 and 14 also used film to take close-up stereo pair photographs of the lunar soil. This was done with the Apollo Lunar Surface Closeup Camera (ALSCC, Figure 5.1-7), which was meant to be placed on the ground. The film was about 25 centimeters (10 inches) from the ground and was exposed in fixed conditions (1/100th of a second, f/22.6) thanks to a built-in electronic flash. Each photograph generated two images taken from slightly different angles and covered a ground area of approximately 75 by 75 millimeters (3 inches). 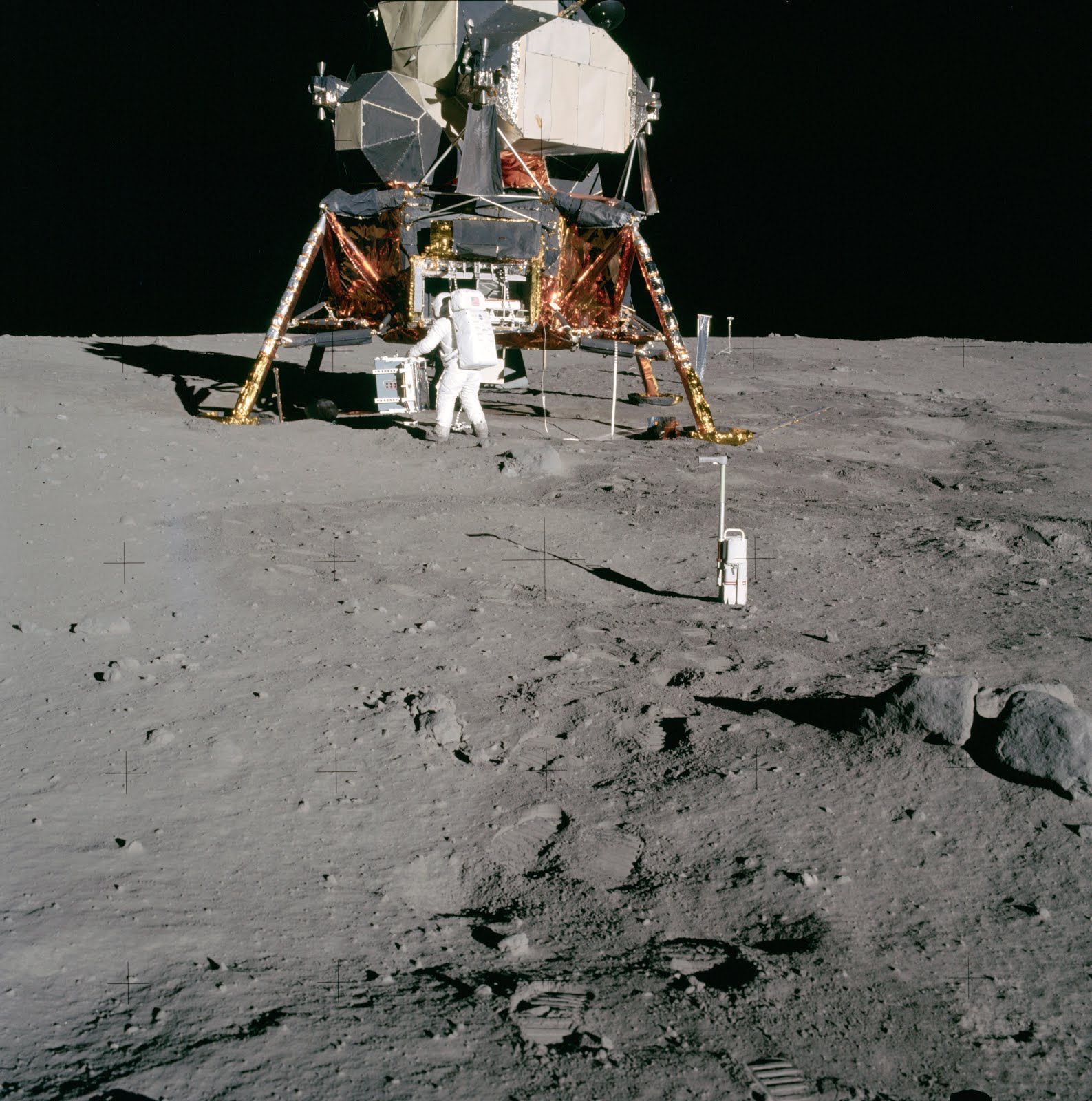 
The astronauts of Apollo 16 and 17 also used a Nikon camera with 35 mm film to take photographs inside the spacecraft and through the windows to record the visible stars. 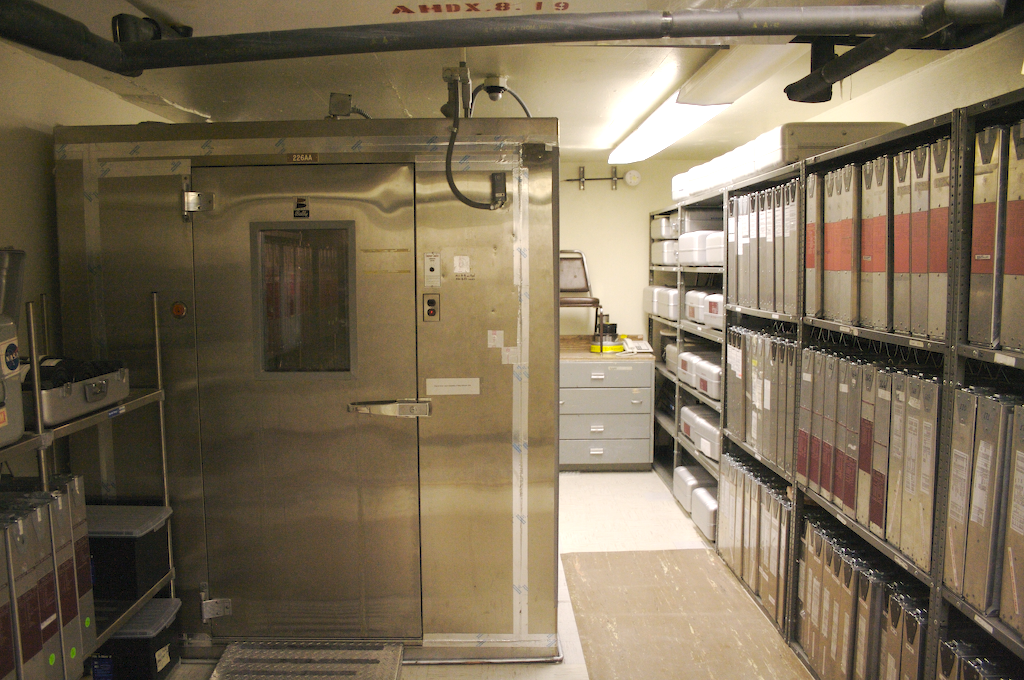 Figure 5.1-9. The inside of the cold storage room that preserves the original Apollo films. Left: the freezer; right, films being thawed slowly to scan them. Credit: Apollo Image Archive. 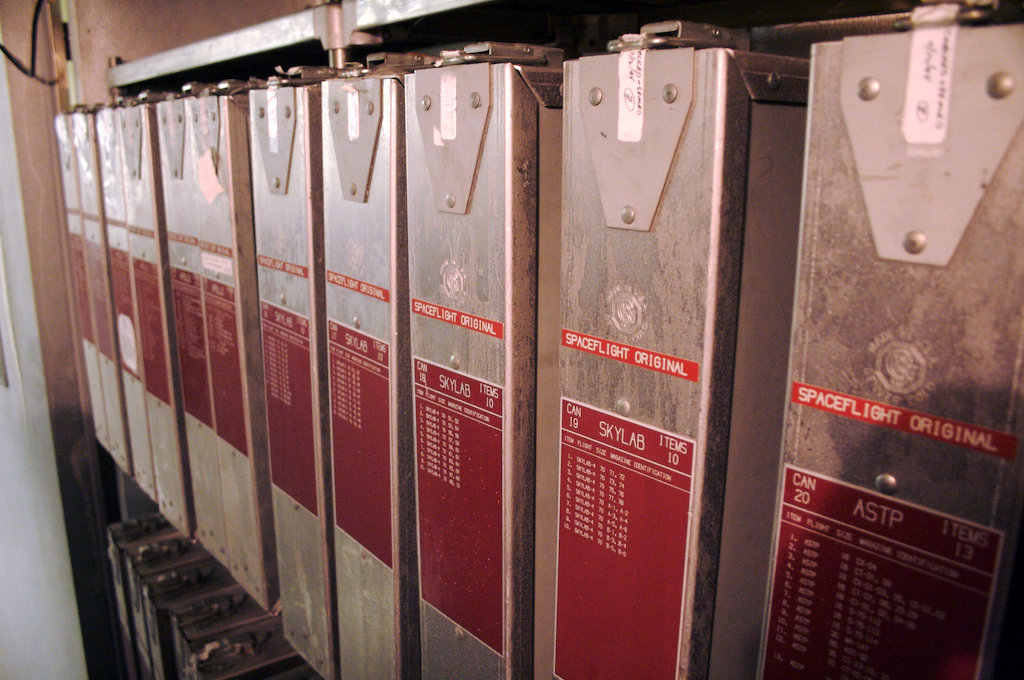 Figure 5.1-10. Containers of original films of the Apollo missions inside the cold storage rooms. Labeling in the foreground refers to Skylab and Apollo-Soyuz flights. Credit: Apollo Image Archive. 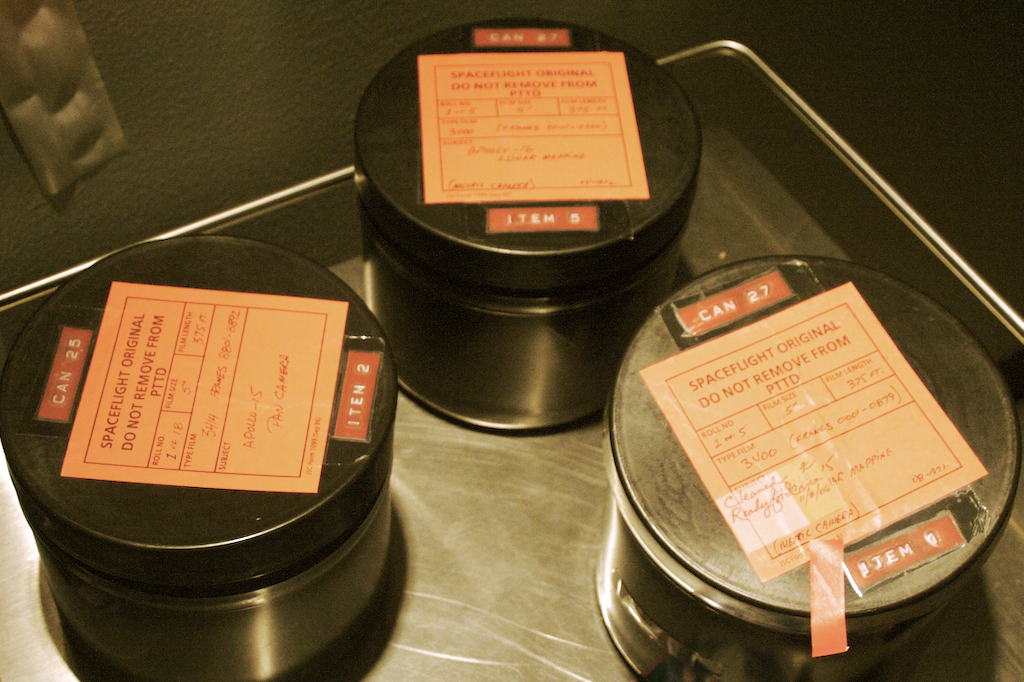 
Having established this basic information on the techniques used for the still pictures taken on and around the Moon by the Apollo astronauts, we can now deal with the alleged anomalies that hoax supporters claim to have found in these images.

NEXT: 5.2 Why are there no stars in the photographs?