Ralph Rene (1933-2008), a self-taught American writer and inventor with no formal background in spaceflight, self-published several editions of his book NASA Mooned America! in the early 1990s. The book rapidly became popular among conspiracists. His Moon landing fakery claims led to interviews for several television programs produced by The History Channel, National Geographic, Fox TV, Showtime and other networks around the world. 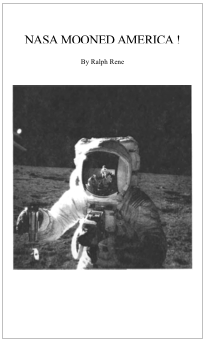 
The 2001 Fox TV show Did We Land on the Moon? described him as a “physicist” and as an “author/scientist”, but Rene acknowledged in his own online biography that he “did not finish college and is, therefore, without ‘proper academic credentials.’”

However, the same biography claims that he was a former “consultant to NASA and the Rand Corporation” with “impeccable” credentials because he had been contacted by Rand “pleading for contributions of free inventions or thoughts relating to space for NASA”, “at least one of his ideas” had passed “three sequential screening committees,” and his name had been published in a NASA “propaganda document” regarding possible crewed missions to Mars. Here is his statement in full (Rene wrote in the second person):

... the Rand Corporation contacted him pleading for contributions of free inventions or thoughts relating to space for NASA. Two years later he received from the superintendent a free, full sized, thick, glossy page, full color NASA propaganda document. To his complete surprise he found his name printed in the middle of page A-51. To deserve this questionable honor, at least one of his ideas had to pass three sequential screening committees.


On his website and in his book The Last Skeptic of Science (1988), Ralph Rene argued that the official value of pi is wrong (the real one, he claimed was exactly 3.146264), that Einstein’s theory of relativity is not valid and that Newton’s law of universal gravitation is in error.

Despite Rene’s questionable background, his claims regarding the Apollo missions continue to this day to be quoted in traditional media and on the Internet. They will be discussed in detail in the chapters that follow.