3.13 The Moon walk proves the moonwalks

People who allege that the visual record of the Apollo missions was faked frequently claim that the astronauts’ gait on the Moon was simulated by using wires or slow motion or both.

In 2008, Discovery Channel’s Mythbusters show put this claim to the test. Adam Savage, one of the show’s hosts, donned a spacesuit replica and tried to simulate the lunar walk by slowing down the recording of his strides and by using a special harness that supported five sixths of his weight, simulating the Moon’s low gravity, which is one sixth of the Earth’s. 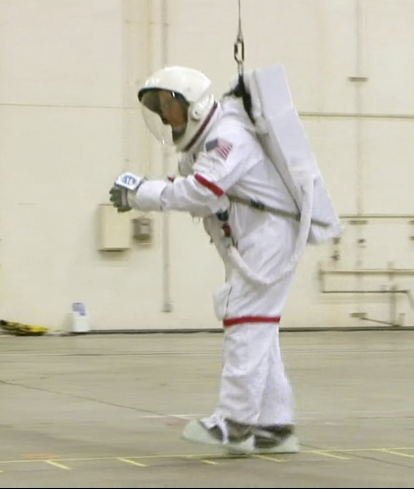 
Both methods failed miserably. Direct comparison between the Apollo footage and the effect of wires and slow motion reveals glaring differences. The harness and wires reduce the effect of gravity on the fake astronaut’s body, but not on the items he is wearing or carrying, which dangle and swing under full Earth gravity, giving away the trick.

Slow motion instead slows all of the simulated astronaut’s movements, whereas the Apollo footage shows that the astronauts made quick arm, leg and hand motions as they walked on the Moon. Achieving this effect through slow motion would have required the fake astronauts to move impossibly fast so that their gestures would appear normal when slowed down.

There’s only one way to achieve on Earth the fluid motions of the astronauts and the slow oscillation of the items they carry that we see in the Apollo footage: flying in a special aircraft which traces rollercoaster-like parabolic arcs. Not unsurprisingly, the aircraft is known as Vomit Comet. 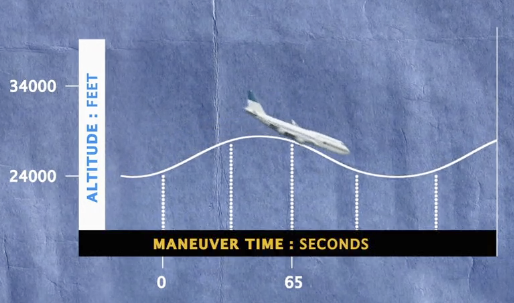 
By adjusting the aircraft’s speed and inclination appropriately, these arcs create brief periods during which the cabin conditions are equivalent to lunar gravity, just like a car driving at speed over a hill makes its occupants “float” for an instant. The effect is the best approximation of the zero- or low-gravity conditions of spaceflight. Indeed, this is how Apollo astronauts trained for their spacewalks and moonwalks. The same technique was used for some of the zero-gravity shots in Ron Howard’s great movie Apollo 13 and is still used today to train current astronauts.

Mythbusters performed flights that used this method and obtained footage showing a very smooth gait that exactly matches the Apollo moonwalk footage without resorting to wires or slow motion. 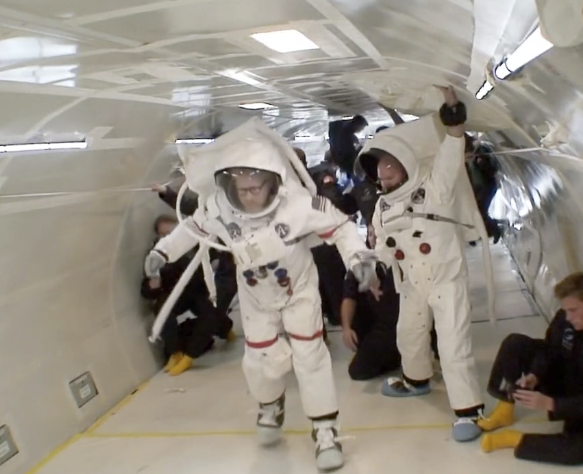 
One might wonder whether this method could have been used to shoot fake moonwalks in the 1960s, but there’s a catch: the low-gravity effect produced in this way only lasts a few seconds at a time. Moreover, it occurs within the cramped space of an aircraft cabin. The Apollo footage instead includes uninterrupted hour-long shots taken in very large spaces.

Also, we’ve seen that the visual record of the Moon missions shows phenomena that can only occur in a vacuum, such as the behavior of the dust. The cabin, therefore, would have to be a colossal top-secret flying vacuum chamber capable of hour-long parabolic arcs. Once again, flying to the Moon would have been easier.

Shooting fake Moon footage underwater might also be considered. Carefully adjusting the buoyancy of every single item carried and worn by the astronauts could provide a credible visual appearance of low gravity. However, this technique would require an immense and very deep tank filled with crystal-clear water, and a single stray bubble would reveal the fakery. Besides, in an underwater environment the simulated moondust would not fall back suddenly as it does in the Apollo footage: it would tend to float and swirl about, once again giving away the trick.

Indeed, the key problem of faking the Apollo moonwalk footage isn’t achieving a single visual effect, but achieving them all simultaneously and for long, unbroken sequences, which must all be perfectly consistent, because the TV footage must match the film footage and both must match the photos.

In a nutshell: in the 1960s, the only way to obtain footage of astronauts walking on the Moon as shown by the Apollo visual record was to actually go to the Moon.

And if the Apollo footage is authentic, so are the Moon landings.

NEXT: 3.14 Attempted simulations in movies