3.12 The size of the alleged soundstage

People who claim that the Moon mission footage was produced on a movie set often fail to consider that many Apollo photos were taken in sequences while the astronaut-photographer slowly turned around. Therefore, these pictures can be assembled into huge panoramic images, as shown below for the Apollo 11 mission.


Achieving the same result with special effects would have required a colossal soundstage. The movie set, moreover, would have had to be lit entirely by a single, high-power light source, because multiple lights would have produced multiple shadows.

There’s more. The Apollo missions that carried the Rover Moon car brought back footage from the onboard movie camera that shows the Rover traversing the lunar surface in uninterrupted sequences that last tens of minutes. For example, the color film footage known as Traverse to Station 4 from the Apollo 16 mission lasts 25 minutes without breaks (these long durations were achieved by using low frame rates).

This footage shows the changing surroundings and terrain under the Rover’s wheels, which kick up dust that falls sharply to the ground.

Achieving this effect by using Hollywood-style tricks would have required a colossal movie set, and since the Rover is seen kicking up fine dust that falls right back to the ground as it travels instead of forming a cloud, that giant movie set would have to be entirely in a vacuum. All this would have to be lit by a single light source.

Hoax proponents might suggest a highly sophisticated scale model of the Rover and of the lunar surface, placed in a manageably smaller vacuum chamber. But that would not explain uninterrupted video sequences such as the one in Figure 3.12-2, taken from the live television broadcast of the Apollo 16 mission: it shows astronauts (impossible to simulate with models) walking continuously away from the camera until they almost disappear from sight, despite the camera zooming in, without ever reaching the far end of the alleged movie set.


It is important to bear in mind that on the Moon there’s no atmospheric haze to blur the details of distant objects and provides a visual hint of distance and size. There are no familiar references, such as trees or houses, that can provide a sense of scale. Indeed, the rock that appears to be just behind the astronauts as they walk towards it turns out to be as tall as a four-story building (hence the name House Rock): as detailed in NASA’s Apollo 16 Preliminary Science Report, it is 12 meters (40 feet) tall, measures 16 meters by 20 (50 by 65 feet) at its base, and lies 220 meters (720 feet) from the television camera, which is mounted on the Rover.

It is really hard to imagine a colossal secret movie set, lit perfectly by a single light source, of such gigantic size as to allow such a long, uninterrupted walk and placed entirely in a vacuum.

For those who speculate that the Moon pictures were faked using painted backdrops to simulate the distant horizon, it should be noted that many Apollo photographs were taken as stereo pairs (by taking a first picture and then shifting the camera slightly sideways). These stereo pairs can be assembled digitally to produce 3D images or anaglyphs that clearly reveal the actual depth of the scene.

Several collections of these 3D photographs are available in NASA’s Apollo Anaglyph Albums and in the book Luna mai vista (Unseen Moon) by Roberto Beltramini and Luigi Pizzimenti. They can be viewed with glasses fitted with red-blue filters. The original picture pairs can also be edited by anyone to create a stereogram for glasses-free 3D viewing in color.

Figure 3.12-3. Detail of a stereoscopic panorama created by Roberto Beltramini starting from photographs of the Apollo 16 mission. To view it in 3D you need red-blue glasses. Source: Apollo 16 Image Library.


For example, the following 3D image, created by Erik van Meijgaarden from Apollo 17 photos, shows the Lunar Rover car in the foreground, at the so-called VIP Site where it was placed to televise the liftoff of the astronauts in the Lunar Module. The LM is in the background on the left. 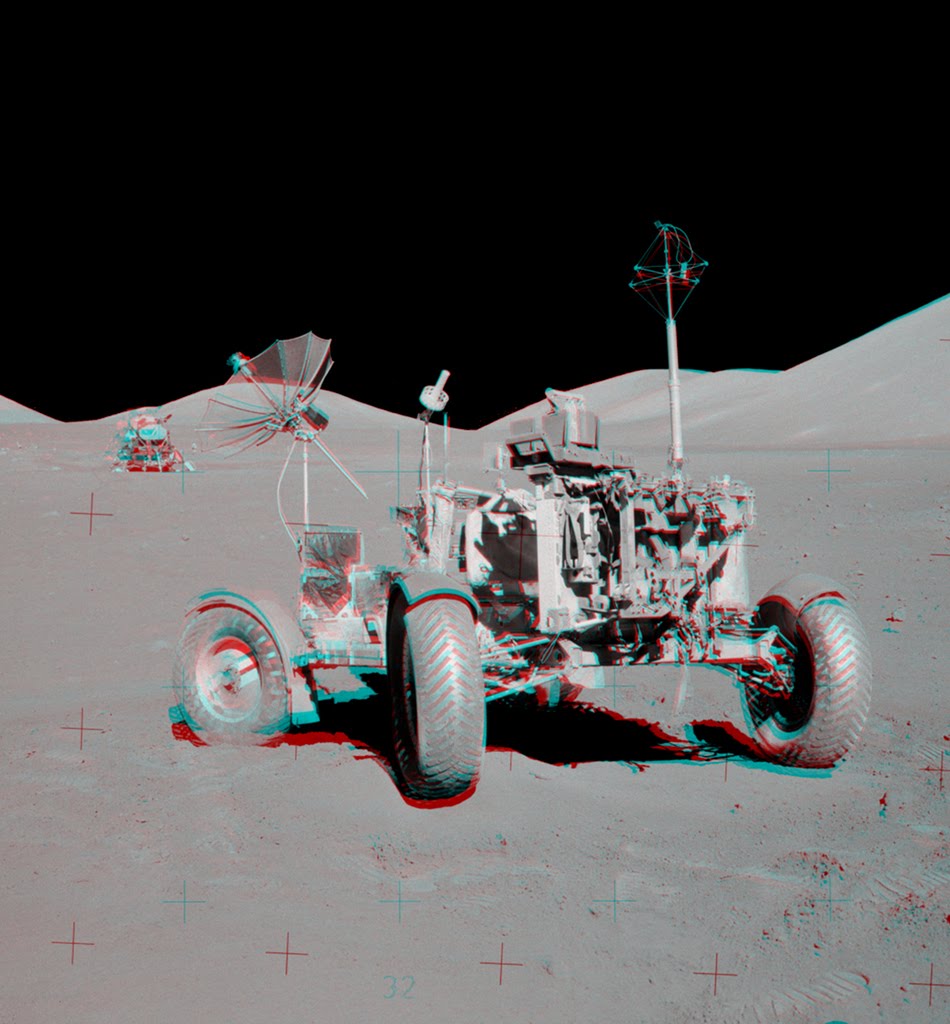 
If you look at this images with red-blue glasses, it becomes evident that the LM is quite far away and that the hills and mountains are even farther away. Achieving this effect on a 1960s movie set would have been impossible.

NEXT: 3.13 The Moon walk proves the moonwalks