There’s another apparently trivial aspect of the visual record of the Moon missions that hoax proponents have great trouble explaining: the dust.

On Earth, the dust kicked up by the wheels of a car, for example, stays in the air for a long time, producing a long billowing cloud that dissipates slowly, such as the one shown below.


However, in the color film footage of the astronauts’ electric car ride on the Moon the fine dust that it kicks up falls immediately to the ground in a parabolic arc. That’s because on the Moon there’s no air to brake its fall and keep it floating. This footage, therefore, must have been shot in a vacuum. This one of the best pieces of evidence proving that the visual record of the Apollo moonwalks was actually shot in an airless environment.


This unusual behavior of the lunar dust also occurs on a smaller scale when the astronauts walk. At every step, the dust they strike with their boots fans out and falls sharply to the ground.

This effect is especially conspicuous in backlit TV and film footage of the Moon missions and can be glimpsed even in the footage of Apollo 11, the first lunar landing, as shown below. 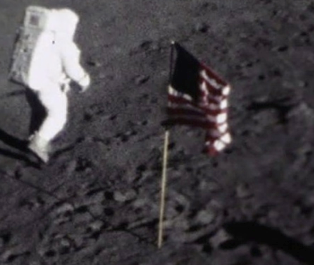 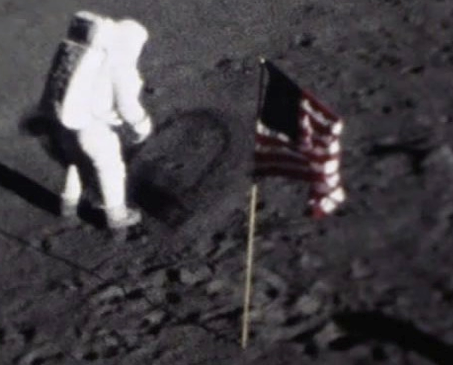 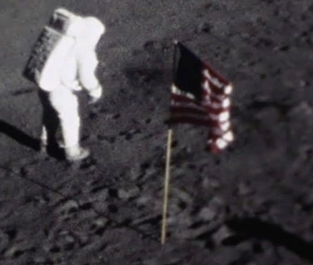 Figure 3.11-4. Detail from three successive frames of the 16 mm color film footage of Apollo 11’s moonwalk: Buzz Aldrin demonstrates the fanning and sharp fall of moondust as part of a series of experiments on the behavior of lunar soil.


While this effect can be rather difficult to perceive in still images, it is very clear in movies and TV recordings. Here are some examples.


Figure 3.11-5. TV and film recordings of moonwalks clearly show the behavior of moondust.


The weird behavior of the dust is also eloquent in the Moon landing footage. When the Lunar Module is about to touch the ground, the dust scatters horizontally in straight lines, propelled by the LM’s rocket exhaust, forming a thin, shallow mist that hides the details of the surface. As soon as the rocket motor shuts down, the dust settles suddenly, without billowing at all, and the ground becomes abruptly visible again. 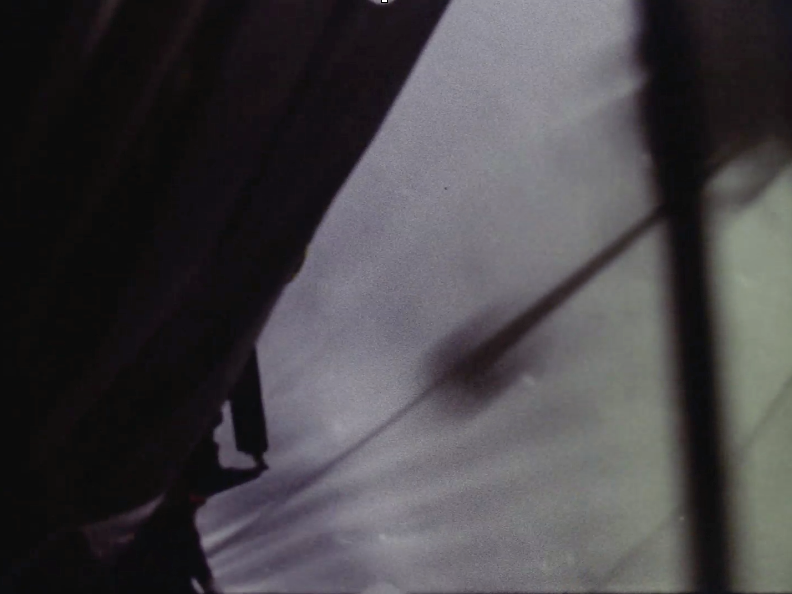 
How could all this have been achieved with the special effects technology of the 1960s?

Some hoax proponents have suggested the use of heavy, coarse sand, but nobody so far has been able to show that such sand actually behaves like the dust in the Apollo footage. It’s not just a matter of falling sharply without forming clouds: it also has to change the way it reflects the light when it is kicked up, becoming very dark in some lighting conditions and extremely bright in others, as occurs in the Moon mission television recordings and movies.

Another approach might have been to shoot footage of model spacecraft inside a vacuum chamber. NASA researchers actually used such a chamber to study how moondust would move when affected by a rocket motor blast in a vacuum: they were concerned that the descent motor would kick up so much dust that the crew would lose the ability to see. 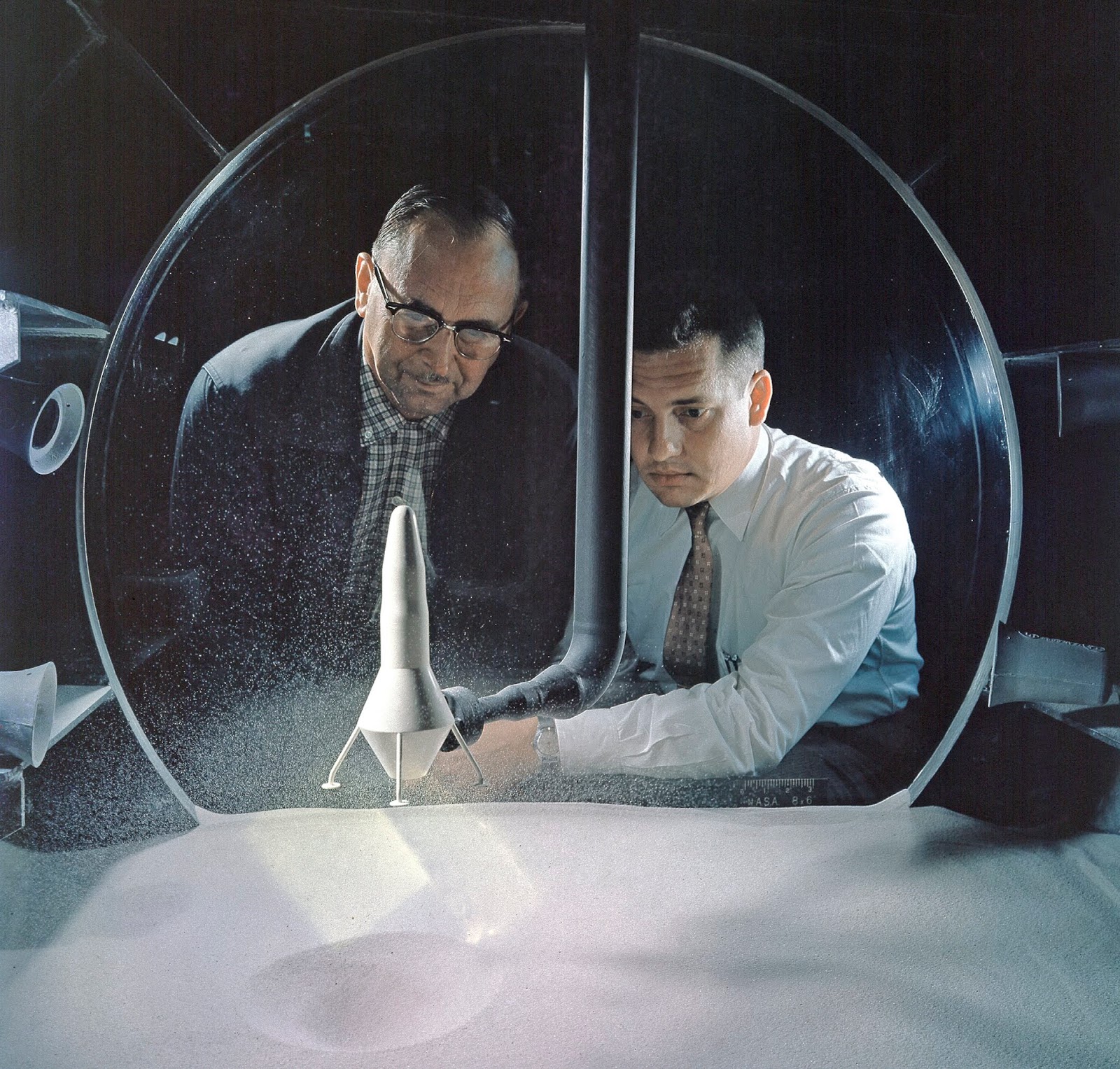 
However, this method would have worked only for footage of the spacecraft. Any TV or film which showed moving astronauts, whose motions could not be reproduced by a scale model or a puppet, would have entailed placing an entire soundstage in vacuum, including the full-size astronaut actors, movie cameras, TV cameras, lights and stagehands.

This would have required a truly immense vacuum chamber, since some Apollo footage shows the astronauts and their electric car walking or driving uninterruptedly for hundreds of meters (yards). But even today, the world’s largest vacuum chamber, located at Plum Brook Station in Ohio, is only 30 meters (100 feet) in diameter. The Lunar Module alone would have filled one third of this chamber, leaving little room to walk around it.

Moreover, this special effect would have to be produced flawlessly at the same time as all the others, and for long, uninterrupted sequences. Again, it would have been easier and safer to actually go to the Moon.

It’s interesting to compare the Apollo lunar landing footage with the Moon landing shown in 2001: A Space Odyssey, a movie that at that time of its release in 1968 was the peerless state of the art in visual effects. The movie was directed by Stanley Kubrick, who is often mentioned by hoax proponents as the visual effects master who allegedly faked Apollo’s photographs, television broadcasts and film footage.

It turns out that the behavior of the dust in 2001 is hopelessly wrong: it floats and forms swirling eddies, as shown below. This means that the scene was shot in an atmosphere, not in a vacuum.


If this is the absolute best that could be achieved with the special effects technology of the 1960s, how did NASA fake the Moon footage?

NEXT: 3.12 The size of the alleged soundstage