Success of the mission and survival of the astronauts depended on some very tricky undocking and redocking maneuvers during the outbound journey and on a vital rendezvous to be achieved while in orbit around the Moon.

A few hours after liftoff, the crew separated the Command and Service modules (CSM) from the rest of the spacecraft and positioned them slightly ahead by using the SM’s maneuvering thrusters. The four panels of the fairing were released, exposing the lunar module. The astronauts then turned the CSM around, docked with the LM and extracted it from the S-IVB, the third stage of the Saturn V rocket.


Figure 2.3-1. Extraction of the Lunar Module. Animation by Michael Quinn.


The CSM and the LM then continued their flight towards lunar orbit, while the S-IVB rocket motor was restarted to nudge the spent stage away into an orbit around the Sun or, from Apollo 13 onwards, to crash into the Moon and produce a man-made moonquake, which was picked up by the seismometers placed on the lunar surface by previous missions, allowing scientists to probe the interior structure of the Moon.

The docked Lunar Module was linked to the CSM by a tunnel, through which the astronauts crawled to power up and check the vehicle and prepare it for descent to the Moon. As the spacecraft approached the Moon, the drag of Earth’s gravity that had been gradually slowing it began to fade and Apollo’s speed started to increase due to the pull of lunar gravity.

The astronauts turned the spacecraft around so that the Service Module’s powerful main engine was pointing forward. They had to achieve multiple carefully timed burns of this engine, as they swung repeatedly around the far side of the Moon, out of radio contact with Earth, in order to slow down and gradually achieve a stable, almost circular orbit around their destination, at an altitude of 100 to 120 kilometers (54 to 65 nautical miles) and a speed of approximately 5,900 km/h (3,700 mph).

The two astronauts that would walk on the Moon transferred into the lunar module, while their colleague stayed in the Command Module, and the two vehicles undocked (in the more advanced lunar landing missions, the CSM carried the LM closer to the Moon before undocking, in order to conserve the lander’s limited fuel). After flying in formation to visually inspect each other and run a final check of all onboard systems, the LM pointed its descent engine forward and fired it to begin the landing phase.

On the Moon there’s no atmosphere to glide through with wings or parachutes, so descent depended entirely on the flawless operation of the descent stage’s single rocket engine, which had to reduce the spacecraft’s speed from 5,900 km/h (3,700 mph) to zero in about twelve minutes and then allow the LM to hover just above the lunar surface long enough to find a safe landing spot. Fuel reserves were tight and left little margin for error and none for second attempts.

After landing, the astronauts performed one or more moonwalks (Extravehicular Activities or EVAs) to gather science data and samples under the watchful eye of a television camera that broadcast their activities live to Mission Control and to a worldwide audience back on Earth. 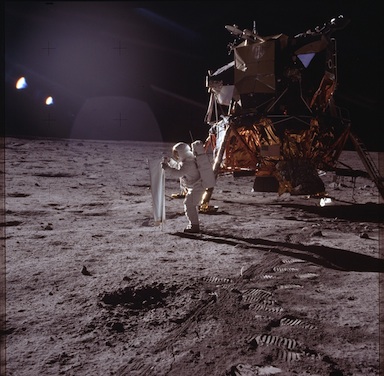 
The Apollo moonwalkers had fully autonomous spacesuits, with oxygen, cooling systems and radio links in their backpacks. In the more advanced missions, they also used an electric car, the Lunar Roving Vehicle or Rover, to cover distances of as much as 35 kilometers (22 miles) during Apollo 17, the lunar mission which also set the total EVA duration record, with over 22 hours spent outside the Lunar Module during three moonwalks.

Once their lunar excursion was complete, the astronauts threw out all unnecessary weights and lifted off in the ascent stage of the LM. The timing and execution of this liftoff had to be very accurate in order to rendezvous with the Command and Service Module, in which the third crewmember was waiting for them in lunar orbit.

If the single ascent engine failed to fire, the lunar astronauts would be trapped on the Moon, with no chance of rescue. With narrow margins for error, if the engine didn’t fire at the right time, with the right thrust and for the right duration, or if the trajectory was incorrect, they would not achieve the rendezvous and would perish in orbit or crash back onto the Moon. The third astronaut would have no choice but to abandon them and return to Earth alone.

The final rendezvous between the Command Module and the ascent stage of the Lunar Module required docking the two spacecraft so that the moonwalkers could return to the Command Module with their priceless cargo of science data, Moon rocks, photographs and film footage. 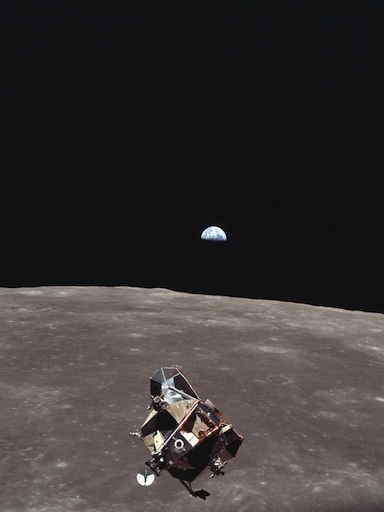 
The ascent stage of the LM was then jettisoned, subsequently crashing onto the Moon, while the instruments placed by the astronauts on the lunar surface radioed their data to scientists back on Earth.