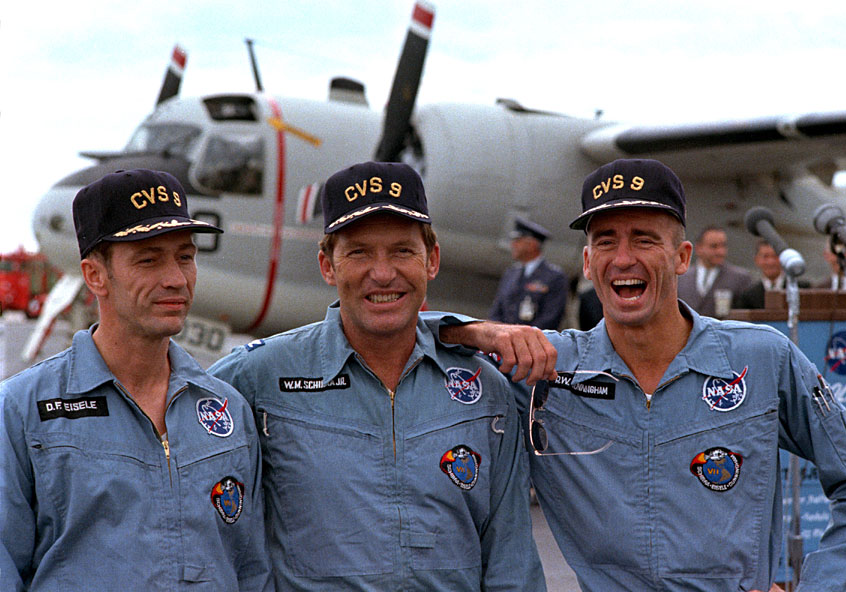 Number of photographs taken: 532. Live TV broadcasts were also made.

Notes: This was the first crewed flight of the Apollo spacecraft, 21 months after the Apollo 1 disaster, and tested all of its systems in Earth orbit. An orbital rendezvous was performed by using the S-IVB stage as a target, but no actual docking was carried out. The crew performed the United States’ first live TV broadcast from space.

The astronauts came down with a head cold, which was particularly unpleasant in weightlessness, and this contributed to a sort of rebellion against the orders from Mission Control, especially on the matter of wearing helmets and gloves during reentry, as the crew was concerned that they would be unable to clear their noses and throats from the mucus accumulated in their heads, which would suddenly start flowing due to deceleration. Mission Control was instead concerned that any unexpected depressurization of the cabin would be lethal if the astronauts weren’t wearing their full reentry gear. The astronauts made the final decision and went through reentry without helmets and gloves.

Apollo 7 was the first US flight to use a mixed-gas atmosphere (65% oxygen, 35% nitrogen) instead of pure oxygen.