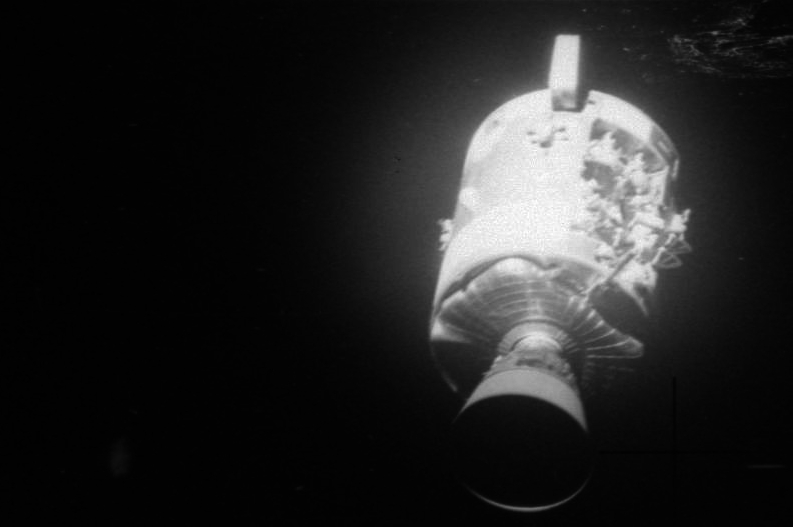 Figure 16.2.14-1. The Service Module of Apollo 13, ripped open by the explosion, is abandoned by the astronauts just before they reenter the Earth’s atmosphere. Detail from photo AS13-59-8501. Whitish marks at top left are marker smudges on the film.

Lunar orbit: scheduled but replaced by a fly-around, setting the absolute crewed record for distance from Earth at 400,171 km (248,654 miles).

Lunar landing date and time: scheduled but not performed.

Number of moonwalks: None. EVAs were scheduled but not performed.

Time spent on the Moon: None. Scheduled but not performed.

Number of photographs taken: 604 (none on the Moon). Color TV transmissions were broadcast and color movie footage was shot.

Quantity of Moon rocks: None. Collection was scheduled but not performed.

Notes: A vital oxygen tank in the Service Module burst at 3:07:53 UTC on April 14, 1970, three days after liftoff from Earth on the way to the Moon, 322,000 kilometers (200,000 miles) from Earth. This depleted dramatically the oxygen reserves and the power available, since Apollo’s fuel cells depended on the tank’s oxygen to generate electricity. The historically famous phrase “Houston, we have a problem” was actually uttered by Swigert as “OK, Houston, we’ve had a problem”; Lovell then repeated “Houston, we’ve had a problem”. The plight of the Apollo 13 astronauts was followed live on TV all over the world.

To save the astronauts, all the systems of the command module were shut down, producing an intense cold inside the spacecraft, and the Lunar Module’s reserves and engine were used. The emergency trajectory forced Lovell, Haise and Swigert to fly all the way to the Moon, swing around it and then finally fly back to Earth, where they landed, in very poor physical shape but still standing, three days and 15 hours after the beginning of their ordeal.