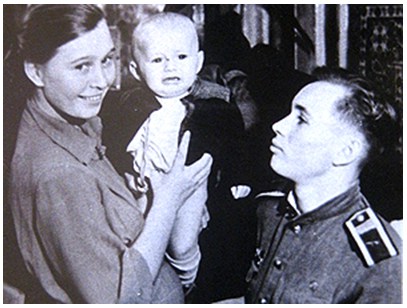 Figure 14.4-1. Valentin Bondarenko (right), with his wife Anya and their child Alexandre in 1956. Source: Anecdotes-spatiales.

Lieutenant Valentin Bondarenko was a fighter pilot in the Soviet air force. On April 28, 1960 he was selected for the first group of 29 cosmonauts and on May 31st of the same year he began training to fly the Vostok 1, the same spacecraft on which Yuri Gagarin would perform the first crewed orbital flight in the history of mankind.

On March 23, 1961, at the end of the third day of a two-week experiment in a pressure chamber at the Institute for Biomedical Studies in Moscow, Bondarenko removed from his body the sensors that monitored his vital functions and cleaned himself with a wad of cotton impregnated with alcohol. He tossed the cotton, which fell onto an electric heater and caught fire, igniting the cosmonaut’s woolen clothing. In the pure oxygen environment of the chamber, the flames raged uncontrollably, with devastating results.

It took half an hour to open the door of the chamber. By then, Bondarenko had suffered third-degree burns on all of his body except for his feet, partly protected by his flight boots. He died in hospital after 16 hours of agony at the age of 24. According to some historical sources, the man assigned to stand by him and report his condition was Yuri Gagarin. Three weeks later, Gagarin flew in space and into the history books, presumably as a replacement for Valentin Bondarenko.

The Praesidium of the Supreme Soviet awarded Bondarenko the Order of the Red Star on June 17, 1961 and the Soviet defense minister issued secret orders that his family be “given all that is necessary, as befits the family of a cosmonaut”.

The horrible death of the young pilot was kept secret until 1980. His face was deleted from the official Soviet photographs of the first six cosmonauts. Cosmonaut Alexei Leonov, questioned about the censorship of these photos and the rumors of cosmonauts who had died in secret, lied repeatedly to Western journalists. Bondarenko’s death was revealed in Russia only in 1986, twenty-seven years later, by an article penned by Yaroslav Golovanov on Izvestia. No Soviet vehicle ever used a pure-oxygen atmosphere. A crater on the far side of the Moon bears his name.