1.4 The first human being in space

1961 sees a new Soviet shocker: on April 12, Yuri Gagarin becomes the first human being to fly in space. Not as a brief up-and-down hop beyond the atmosphere, but as an orbital flight aboard Vostok 1. 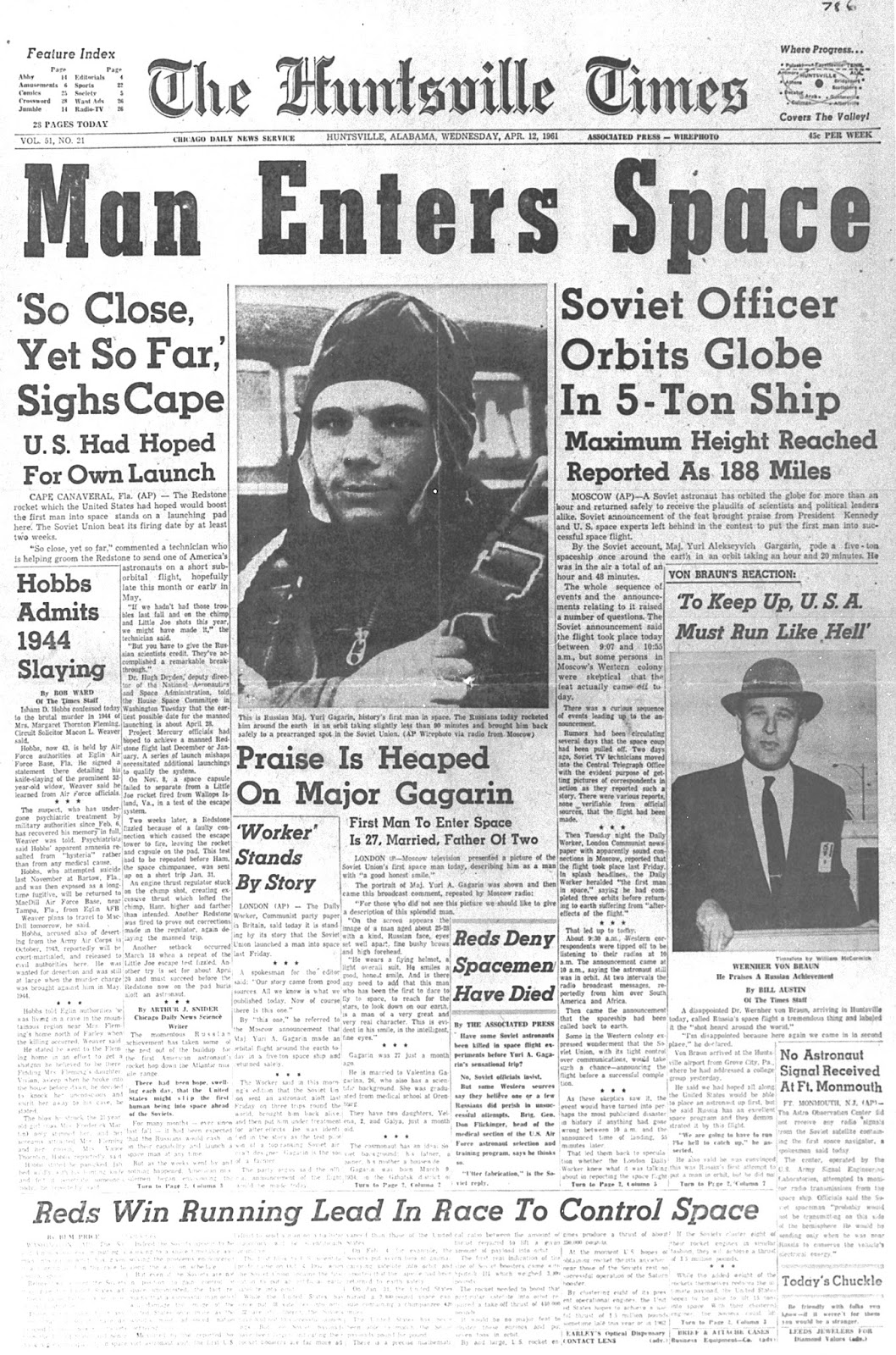 
Americans are stunned and beaten to the draw once again. The best response they can muster is a fifteen-minute suborbital flight with Alan Shepard in a Mercury spacecraft on May 5, because US rockets powerful enough to carry an astronaut into Earth orbit have the unpleasant tendency to explode during test launches. Russian rockets, instead, appear to be outstandingly reliable, also thanks to the fact that their failures are not disclosed.

So with a grand total of fifteen minutes of suborbital human spaceflight on its track record and an unruly assortment of exploding rockets as its current assets, the United States throws down a daring gauntlet: on May 25, 1961, President John Fitzgerald Kennedy challenges the Soviet Union to a race to the Moon.

I believe that this nation should commit itself to achieving the goal, before this decade is out, of landing a man on the Moon and returning him safely to the earth. No single space project in this period will be more impressive to mankind or more important for the long-range exploration of space; and none will be so difficult or expensive to accomplish.


The President’s strategy is as simple as it is ambitious: set a grandiose goal that will impress the world, boost America’s morale and is far enough in the future to give the US aerospace industry the time to get its act together, close the rocket reliability gap and do better than the Russians.

Kennedy, however, will not live to see the outcome of his challenge. He will be assassinated in Dallas, Texas, two years later, on November 22, 1963.

Gus Grissom performs another suborbital flight on July 21, 1961, and finally, on February 20, 1962, nearly one year after the Russians, John Glenn becomes the first American to orbit the Earth aboard the Friendship 7 spacecraft.

But the Soviet Union ups the ante: in August, two spacecraft (Vostoks 3 and 4) fly simultaneously and cosmonauts Nikolayev and Popovich are briefly less than 5 km (3 miles) apart. The double flight is not a rendezvous, but that’s how Soviet propaganda presents it. Nikolayev also sets a new endurance record: four days in space. His picture is broadcast by onboard television cameras to Russian viewers.

In June 1963, Valentina Tereshkova becomes the first woman in space, aboard Vostok 6. She is also the first civilian spacefarer, since all previous astronauts and cosmonauts have been members of the US or Soviet military.

On its own, her 48-orbit flight lasts longer than the combined times of all the American astronauts that have flown until then. No other woman will fly in space for the next 19 years: the second woman to do so will be Russian cosmonaut Svetlana Savitskaya in 1982, aboard Soyuz T-7, and the first American woman in space will be Sally Ride in 1983, aboard Space Shuttle Challenger (STS-7).

On October 12, 1964, the Soviet Union accomplishes the first multicrewed spaceflight: Voskhod 1 carries into orbit three men before the US is able to fly even two. The flight is essentially a propaganda stunt: in order to cram three astronauts into a vehicle designed for two, they are recklessly required to fly without spacesuits.

The first spacewalk is also a Russian record, set on March 18, 1965 by Alexei Leonov aboard Voskhod 2. All the US can do is send the first successful probe to Mars (Mariner 4). 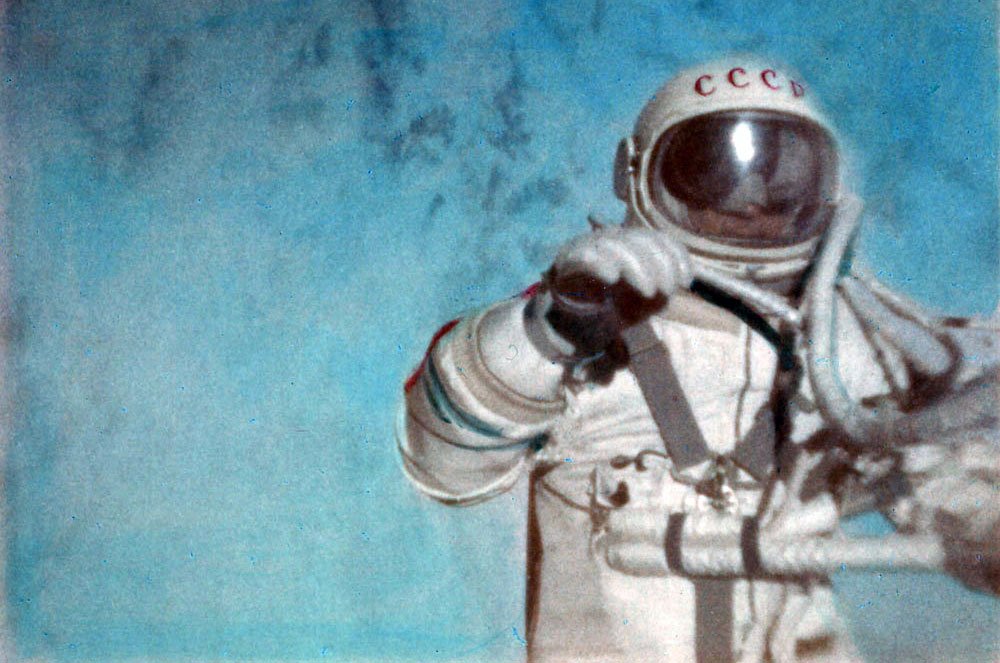 
The first soft landing of a space probe and the first pictures from the surface of the Moon are also a Soviet achievement, with Luna 9 in February 1966.

In the meantime, however, the US space program has been acquiring experience with human spaceflight and with the techniques required for a crewed Moon landing. Between 1965 and 1966, the spacecraft of the Gemini program carry two-man crews that achieve orbit changes, long-duration flights (up to 14 days), spacewalks and rendezvous with dockings and set a new altitude record for human spaceflight: during the Gemini 11 mission (September 12-15, 1966), Charles "Pete" Conrad and Richard F. Gordon fly to a distance of 1374 kilometers (854 miles) from the Earth’s surface and become the first human beings to see their home planet as a sphere. 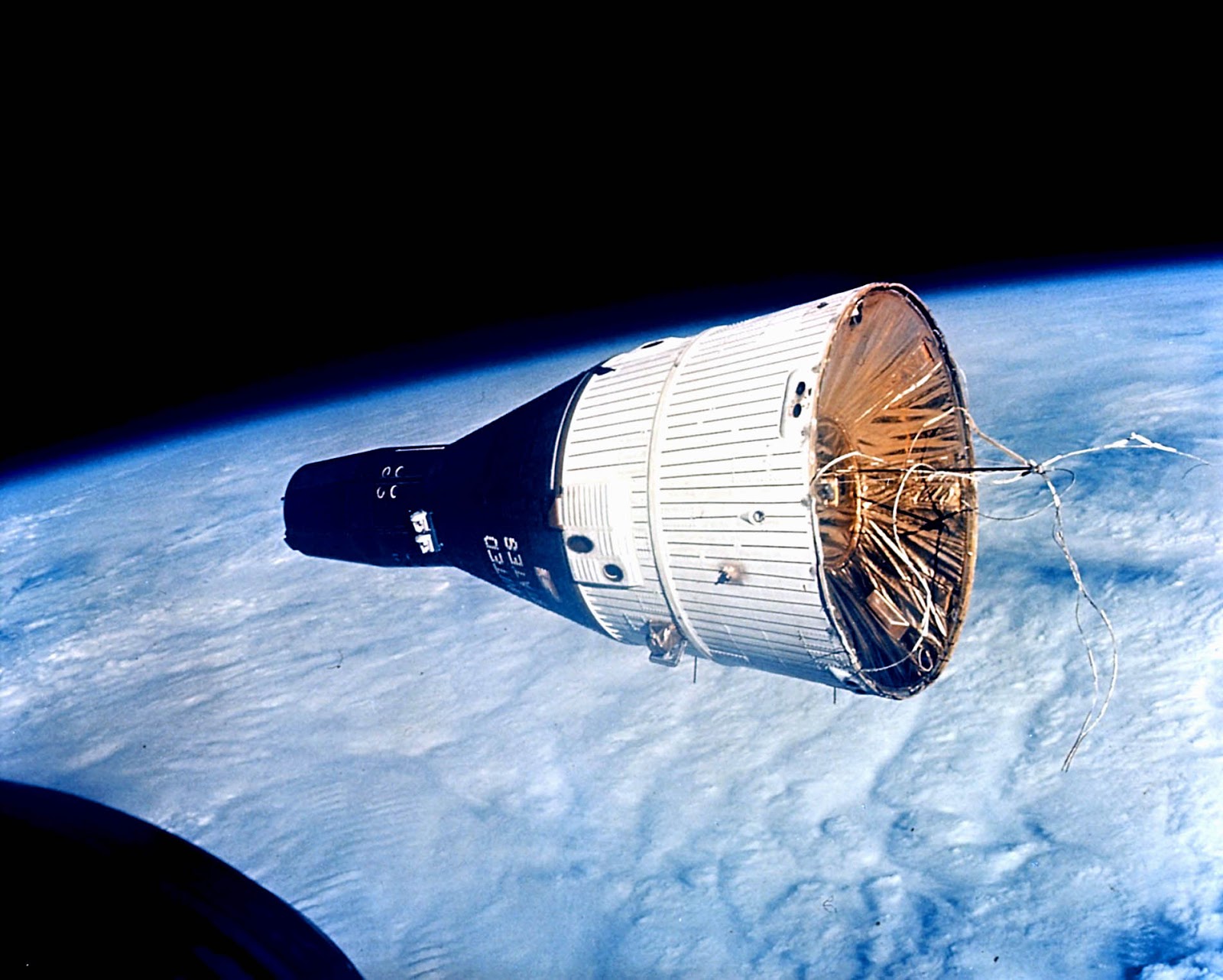 
Meanwhile, the Lunar Orbiter robot probes take detailed photographic surveys of the Moon’s surface and the Surveyor spacecraft land on it, testing its nature and consistency. By and large, the US has caught up with the Russians.

But the Apollo program, meant to put an American on the Moon, is in deep trouble. On January 27, 1967, Gus Grissom, Ed White and Roger Chaffee die in the fire of their Apollo 1 command module during a routine test on the launch pad (Figure 1.4-5; CBS News Special). A substantial redesign was already in progress, but the nationwide shock prompts a drastic rethinking of the ill-conceived spacecraft. 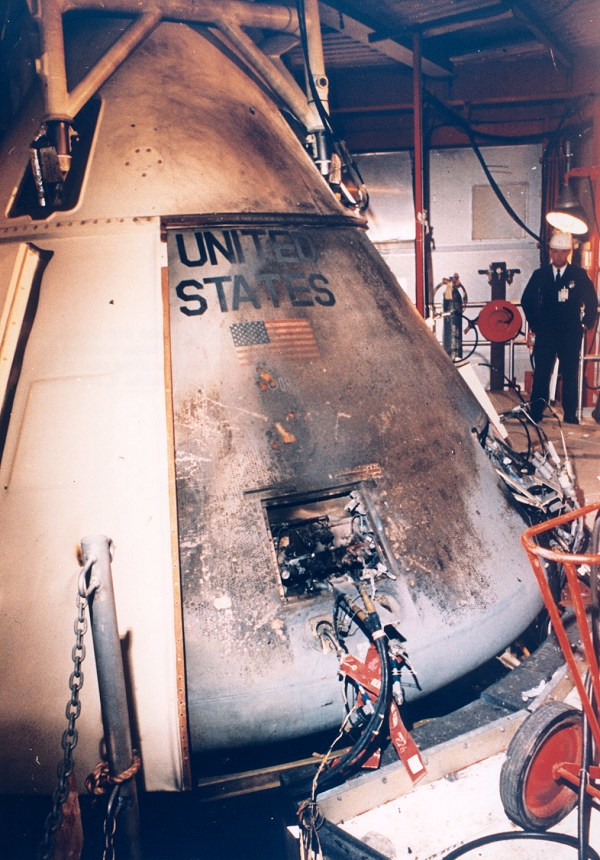 
1967 is a tragic year also for Russian space endeavors. On April 24, Vladimir Komarov becomes the first person to die during spaceflight: his Soyuz 1, prepared hastily to appease the Soviet government’s craving for propaganda coups, crashes fatally upon return from space.

Some researchers (such as the Italian Judica Cordiglia brothers) claim that they intercepted radio signals from other Soviet crewed flights, before and after Gagarin’s mission, that ended tragically and were kept secret. The Huntsville Times front page shown in Figure 1.4-1 mentions (in the article Reds Deny Spacemen Have Died) the suspicions of brigadier general Don Flickinger, head of the medical section of the US Air Force astronaut selection and training program, in this regard, together with the Soviet denial. However, so far the cross-checks of spaceflight historians such as James Oberg and others have found no evidence to support these claims and have instead pointed out their inconsistencies.