11.8 Was alien music heard during Apollo 10 and kept secret?

IN A NUTSHELL: No. It was radio interference between the two Apollo spacecraft modules, it wasn’t music at all, and it wasn’t kept secret.


THE DETAILS: It is alleged that while Apollo 10 was flying over the far side of the Moon and was out of radio contact with Earth its crew heard in their headsets “strange music-like radio transmissions” and that this event was kept secret for decades. In 2016, the Huffington Post reported this claim, noting that it was made in NASA’s Unexplained Files, a Science Channel TV show.

The crew of an Apollo mission to the moon were so startled when they encountered strange music-like radio transmissions coming through their headsets, they didn't know whether or not to report it to NASA, it's been revealed. [...] Almost four decades went by before lost recordings emerged that revealed something unsettling that the three Apollo astronauts had experienced while flying above the far side of the moon. [...] The transcripts of the Apollo 10 mission were classified and untouched in NASA's archives until 2008.

Actually, a little fact-checking shows that the event didn’t unsettle the astronauts in any way and wasn’t kept secret at all. Moreover, the recordings were never lost and the transcripts were already declassified in 1973.

John Young, who was on board Apollo 10, figured out the reason for the sounds as they were occurring: in the onboard audio recordings he can be heard noting that they are “Probably due to the VHF ranging, I guess”. VHF ranging was a technique which used the VHF voice radios of the spacecraft to determine the distance between the Lunar Module and the Command Module.

In other words, it was obvious even to the astronauts themselves that the sounds were coming from the Apollo spacecraft, not from some alien source. After some amusement at the unexpected noise, the astronauts resumed their work with no sign of concern.

Moreover, the Apollo astronauts certainly didn’t cover up the episode. Apollo 11 astronaut Michael Collins reported it in detail already in 1974, and quite openly, in Chapter 13 of his book Carrying the Fire (Figure 11.8-1):

There is a strange noise in my headset now, an eerie woo-woo sound. Had I not been warned about it, it would have scared hell out of me. Stafford's Apollo 10 crew had first heard it, during their practice rendezvous around the moon. Alone on the back side, they were more than a little surprised to hear a noise that John Young in the command module and Stafford in the LM each denied making. They gingerly mentioned it in their debriefing sessions, but fortunately the radio technicians (rather than the UFO fans) had a ready explanation for it: it was interference between the LM's and command module's VHF radios. We had heard it yesterday when we turned our VHF radios on after separating the two vehicles, and Neil said that it "sounds like wind whipping around the trees." It stopped as soon as the LM got on the ground, and started up again just a short time ago. A strange noise in a strange place. 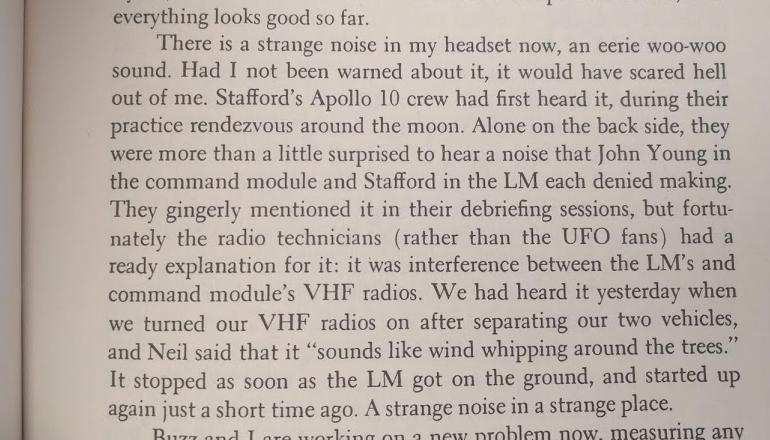 
NASA responded to the 2016 Huffington Post article by noting that the voice recordings and transcripts of Apollo 10 had been publicly available since 1973 to anyone who asked the US National Archives for them.* 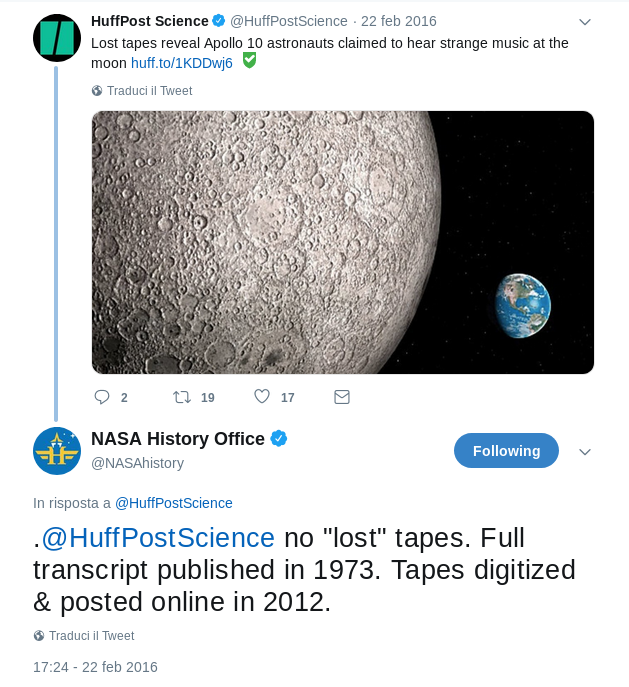 
Additionally, listening to the original recordings and the transcripts of the astronauts’ onboard conversations* makes it very clear that there was no actual music involved.


Onboard recording a10o-1021010, dated 23 May 1969, includes the allegedly mysterious sound, which is simply a continuous whistle. The sound is discussed briefly by the crewmembers with no sign of concern while they continue their normal work, at 2:51 and then at 7:43, as follows:

102:13:02 Cernan: That music even sounds outer-spacey, doesn't it? You hear that? That whistling sound?

In other words, this alleged UFO mystery is based purely on poor fact-checking by a sensationalist TV show and by the Huffington Post. If the writers of the show or the Post journalist had bothered to do their research, they would have realized that this conspiracy theory had already been posted and debunked several years earlier.*


The Post later published a correction; NASA’s Unexplained Files did not.

NEXT: Chapter 12. How to debate a Moon hoax believer